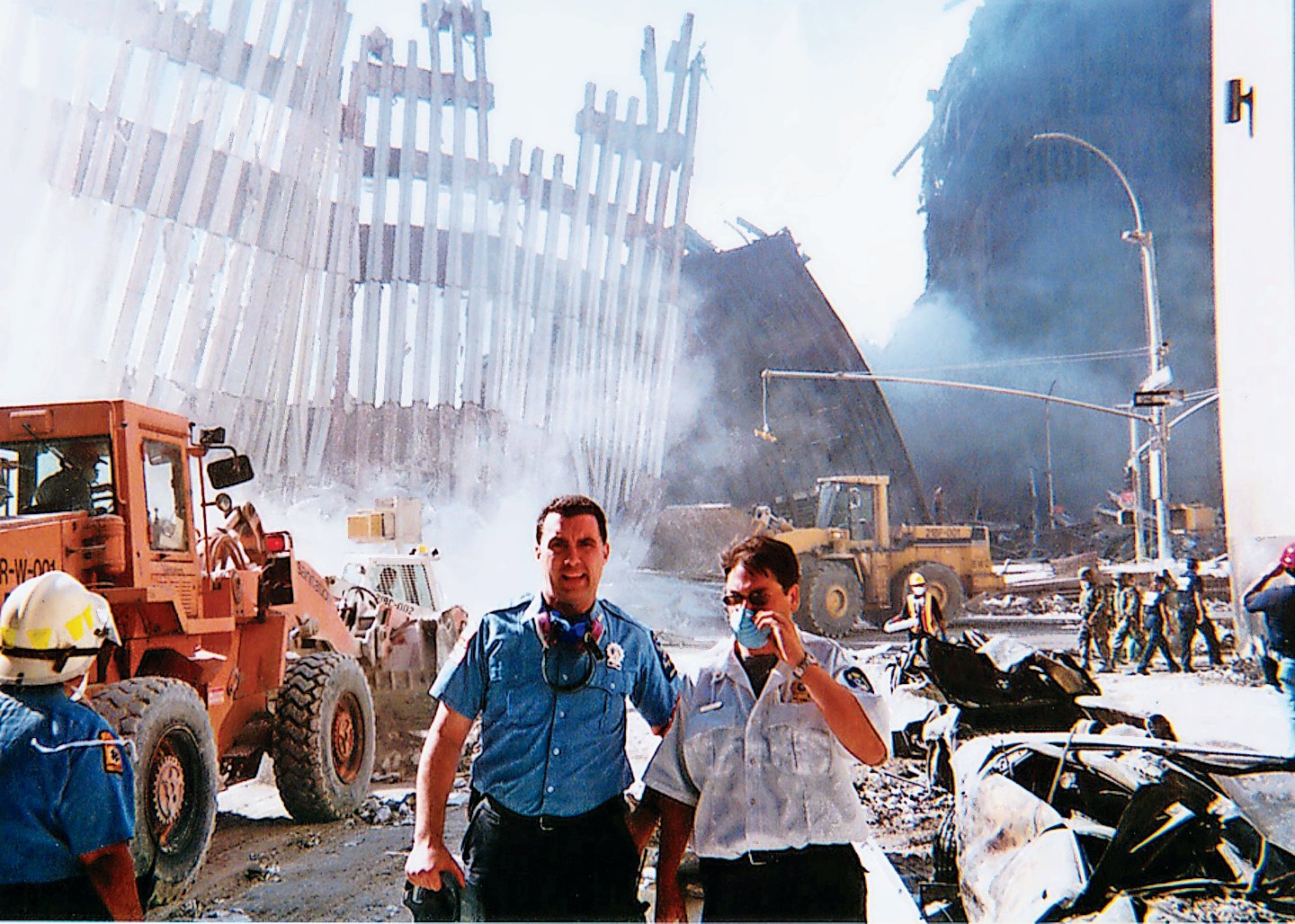 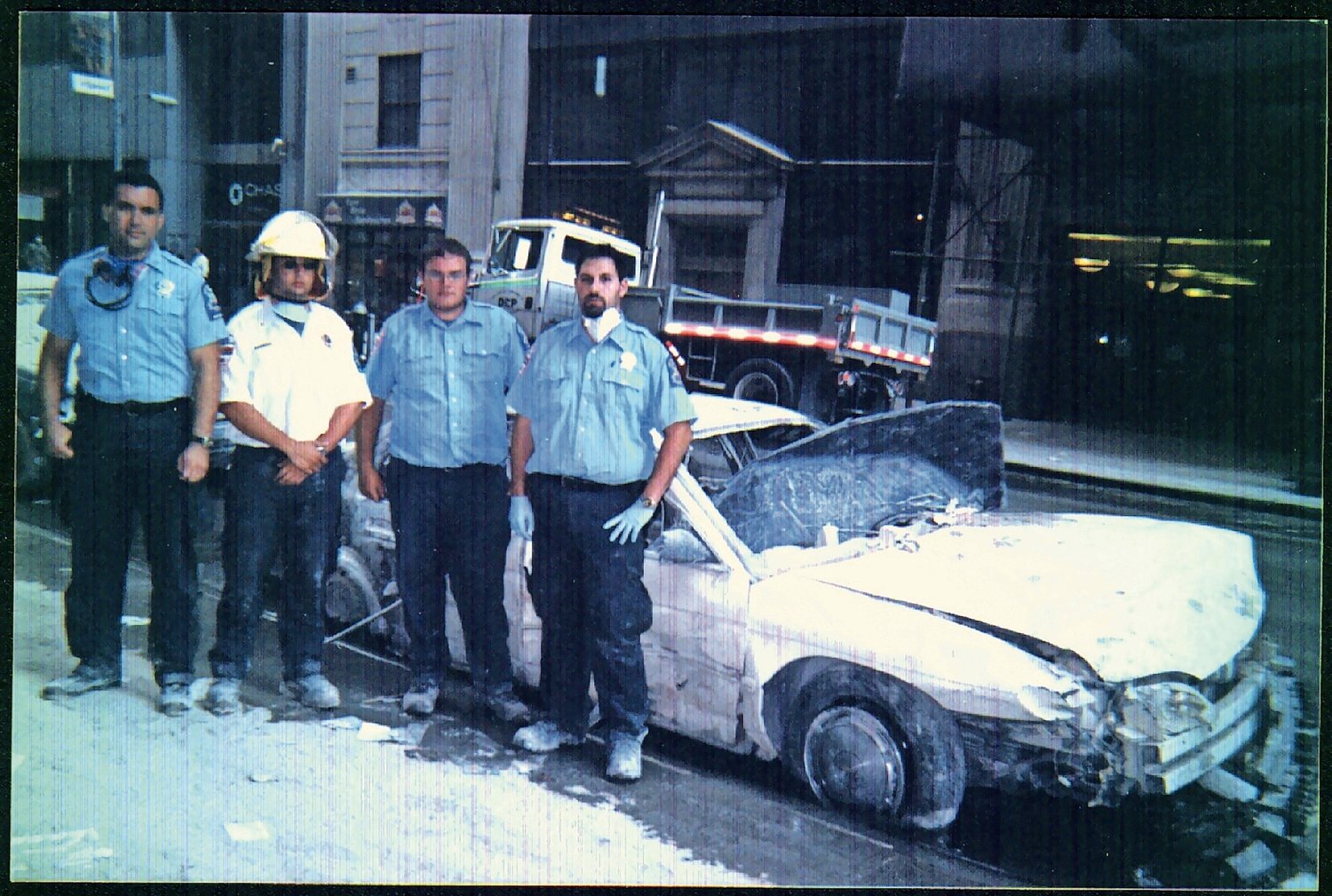 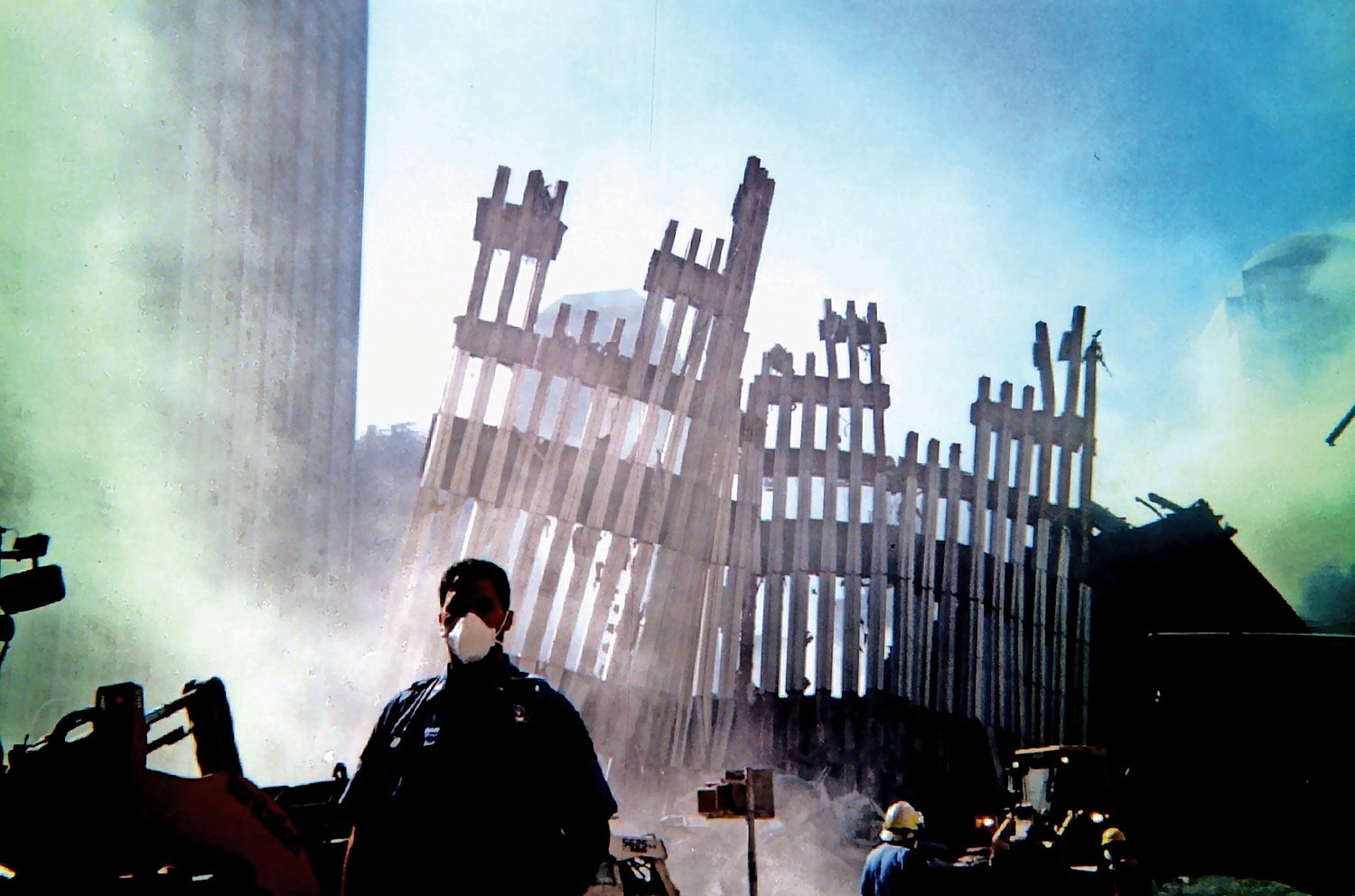 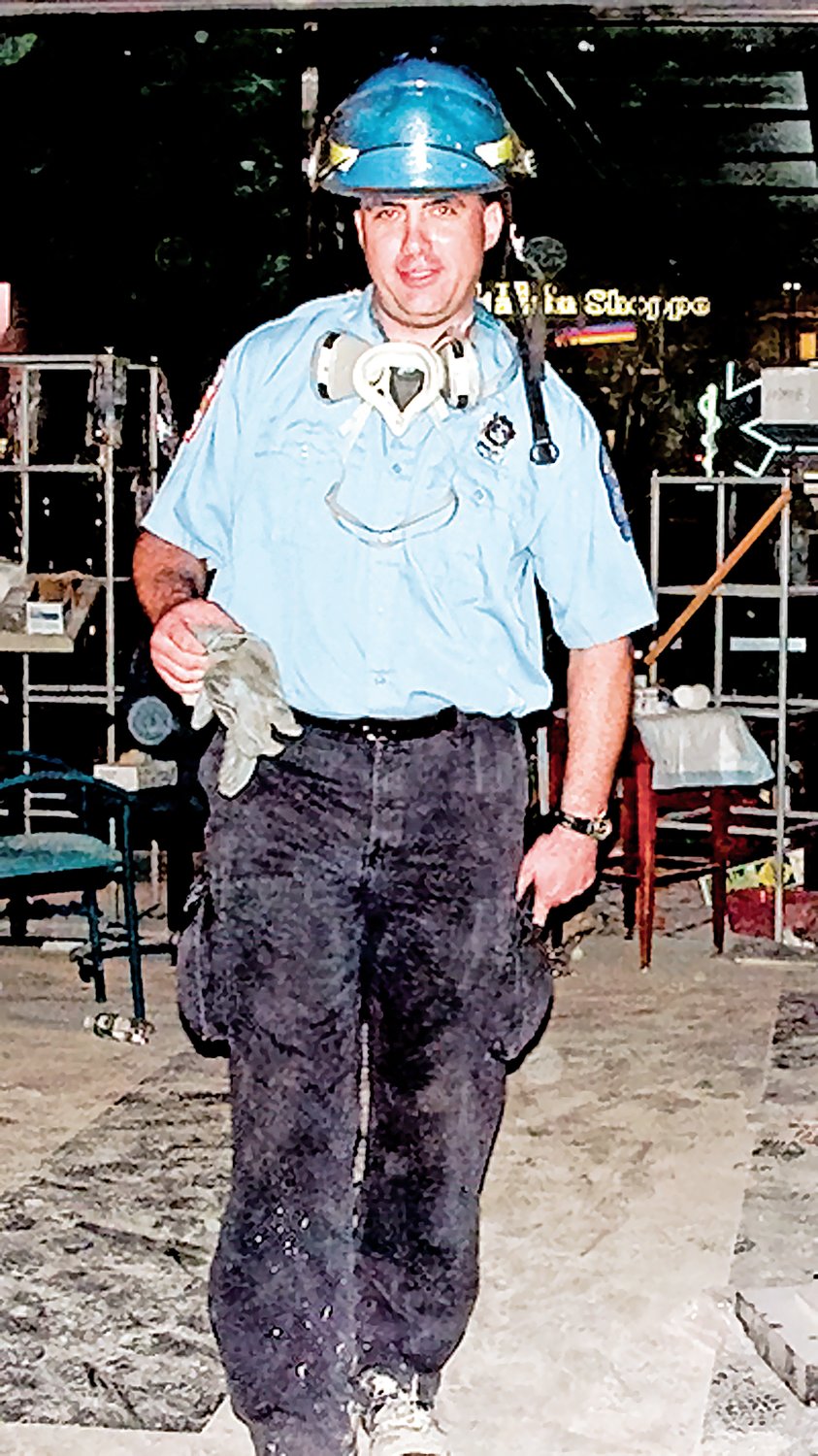 Kevin Kelly died of a severe respiratory illness attributed to his work at the World Trade Center site after the 9/11 attacks.
Herald file photo 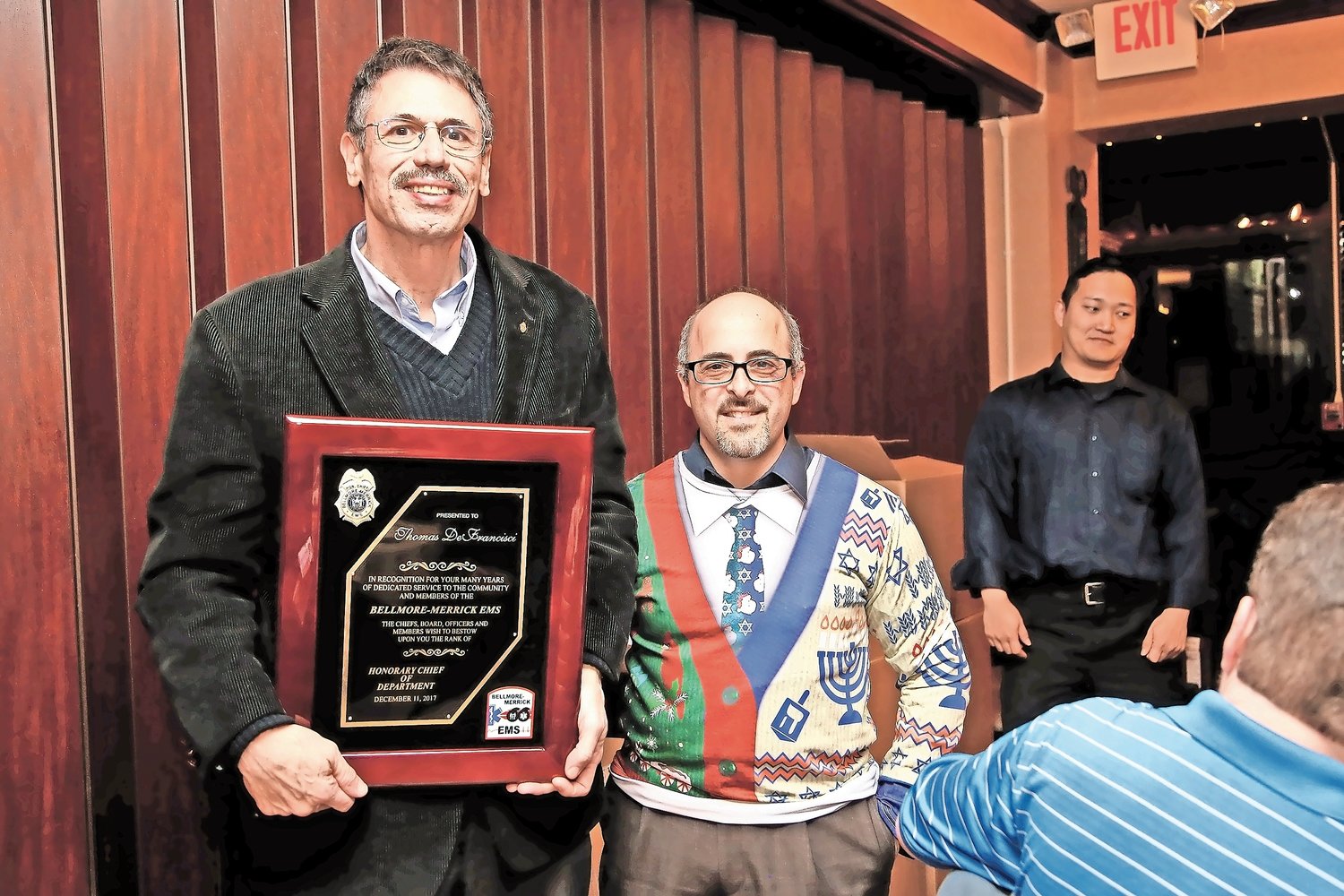 Scott Resnik, right, who was the chief of Bellmore-Merrick Emergency Medical Services, was on hand when Thomas DeFrancisci was named an honorary chief of the organization.
Herald file photo 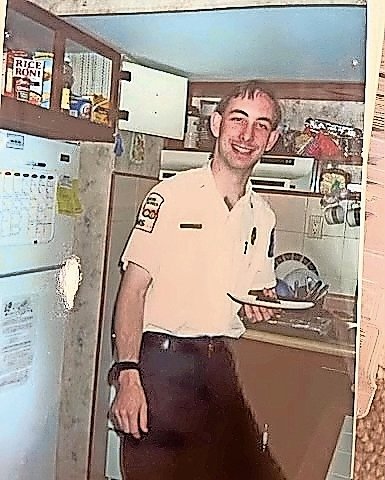 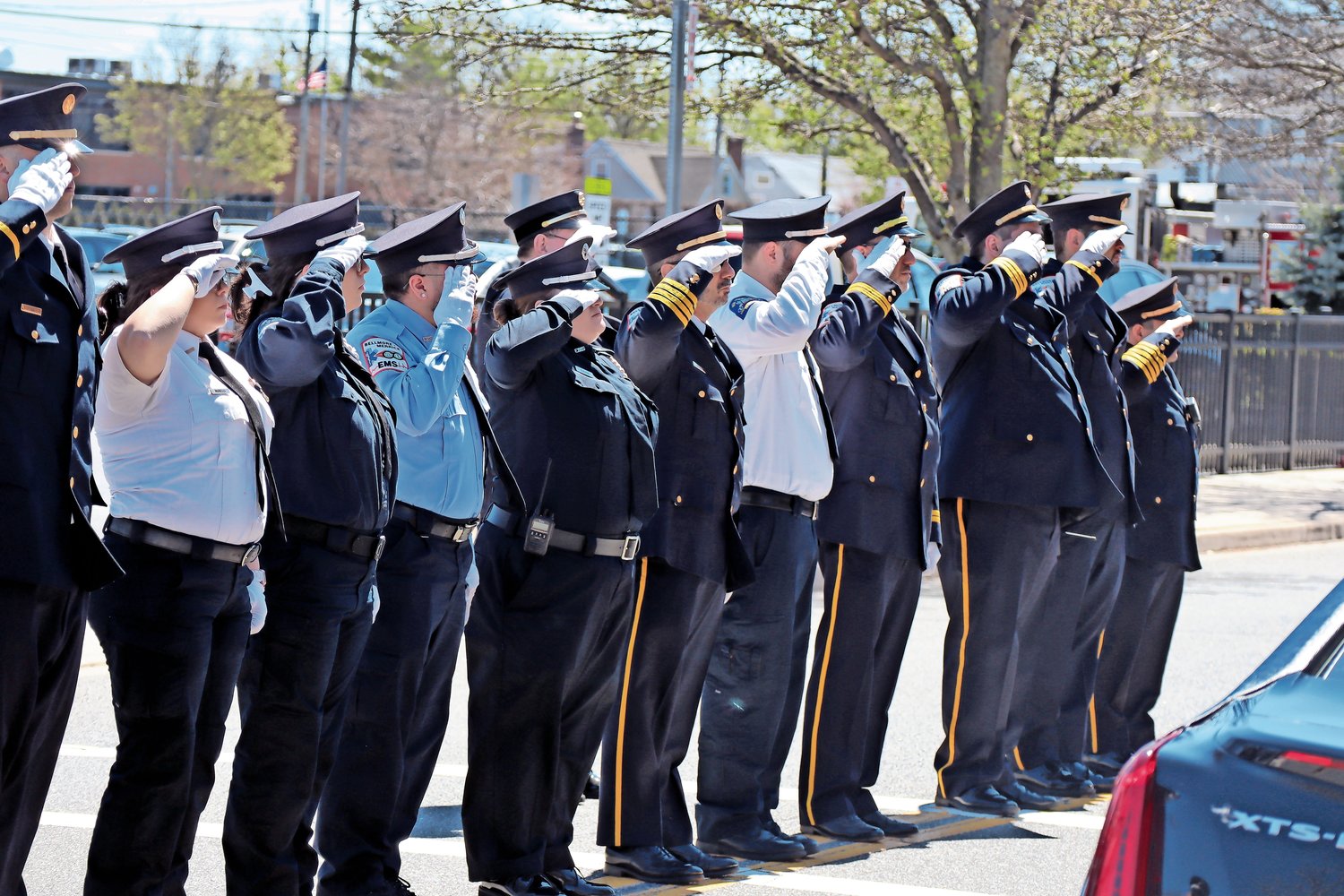 On Sept. 11, 2001, teams from the Bellmore-Merrick Emergency Medical Services squad rushed from Long Island to the World Trade Center, braving hazardous conditions in an unprecedented situation. Not all have survived to see the 20th anniversary of that day.

Although the members were able to return home to their families, some faced lingering health problems brought on by the toxic air at the site of the collapsed towers. The resulting illnesses took the lives of volunteers Kevin Kelly, Thomas DeFrancisci and Andrew Moreno.

The drive to volunteer for the EMS is “in our blood,” said former member Matt Weinick, who grew up in Merrick and served on Sept. 11. “I can’t explain what the drive is — we all tend to be very involved in our communities.”

Weinick was an assistant chief at the time, but was just 24. He recounted sleeping late on the day of the attack, after a recent job loss. His mother called, told him the World Trade Center had been attacked and warned him not to go into the city. Weinick thought of the first bombing at the twin towers, in 1993.

By the time he turned on the television, the south tower had collapsed, he said. He tried to contact friends who he knew were in the area, but cellphone service was down. He quickly realized that help was needed from Long Island.

A plan was in the works at Bellmore-Merrick EMS headquarters. Two of its three ambulances joined other Nassau County EMS crews in heading into Manhattan, while one stayed in the community. Trudging through traffic toward the billowing smoke, the ambulances eventually made it to Shea Stadium, which was converted into a staging area for hundreds of first responders.

The scene near what was then known simply as the pile is still etched in the minds of the volunteers. “You can’t even put it in words,” said Scott Resnik, a volunteer who was 28 at the time. “We pulled up and it was just rubble everywhere; dust everywhere . . . just speechlessness.”

“I was just amazed at the sights,” Weinick said. “I was spending time just trying to comprehend everything we were seeing.”

They also recalled frustration, as many EMS and firefighting crews sat and waited at a staging area until help was needed. Unknown at the time, the collapse of the towers and the resulting loss of leaders of the New York City Fire Department left a command void.

Weinick recalled moving to a Lower Manhattan EMS station also being used as a staging area at roughly 8 p.m. The crew tried to get some rest before being called into the unknown.

At 11 p.m., the first ambulance relocated to the pile while the second stayed at the staging area. The first crew worked at the site until nearly 6 a.m. on Sept. 12, when Weinick and the second crew came in to provide relief.

Weinick remembered more frustration, however, as they waited amid a slow rescue operation. It wasn’t until early afternoon when they were asked to transport an injured worker who had severed a finger to a hospital. Later they took a body to a makeshift morgue, and volunteered on Staten Island, helping police officers and firefighters coming off the ferry who were in need of medical assistance.

Resnik, who later became chief and president of the EMS, remembers one incident vividly. In the days after the attacks, sirens were installed to warn of another impending attack — nothing was certain at the time — and if they went off, they conveyed one message, Resnik said: “Run.”

Something triggered the sirens, and the first responders in his vicinity ran. He took cover behind a rescue truck, and saw a nearby firefighter collapse. The firefighter, who was in need of medical assistance, was transported to a hospital by Resnik’s crew.

Kevin Kelly, of East Meadow, was with Weinick through much of the day on Sept. 11. He helped at the first staging area, Resnik recalled, before joining in the digging in search of survivors.

In an unthinkable situation, Kelly tried to keep the mood light, Weinick recalled. “He did the best to make a terrible situation as light as possible,” Weinick said.

Not long after he finished working at the World Trade Center site, Kelly was diagnosed with a severe respiratory illness, and he suffered from post-traumatic stress disorder as well. He died in 2015, at 55, and was posthumously recognized as the Bellmore-Merrick EMS’s first honorary chief.

Thomas DeFrancisci, of Bellmore, lived with carcinoid cancer for 11 years after his service at ground zero. The department also named him an honorary chief before he died in 2018, at age 61. EMS volunteers, firefighters, police officers and friends and family came out in large numbers to honor him at his funeral at St. Barnabas Church. A massive American flag flew over Bedford Avenue, and he was described as selfless, brave and generous by attendees.

Andrew Moreno was a former chief and a lifetime member of the EMS, which he joined in 1995. He later moved to Southold, where he joined the Riverhead Volunteer Ambulance Corps and served as vice president of its board of trustees. Moreno died on June 3, at age 41. No cause of death was given.

Resnik is a survivor of a 9/11-related disease. He overcame kidney cancer and is now fully recovered, he said. Weinick, too, is free of any 9/11-related illnesses — “And I’m grateful,” he said.

Looking back on Sept. 11 and its immediate aftermath, Resnik recalled a time of unification unseen since World War II. But in the 20 years since, he said, he has noticed a growing political and social divide.

“It’s easy to forget what makes us one America,” Resnik said. “It’s a weird environment, to see so much divide 20 years later — it’s tough to swallow. I wonder if, God forbid, something like that were to happen today, that same impact would be shared emotionally.”