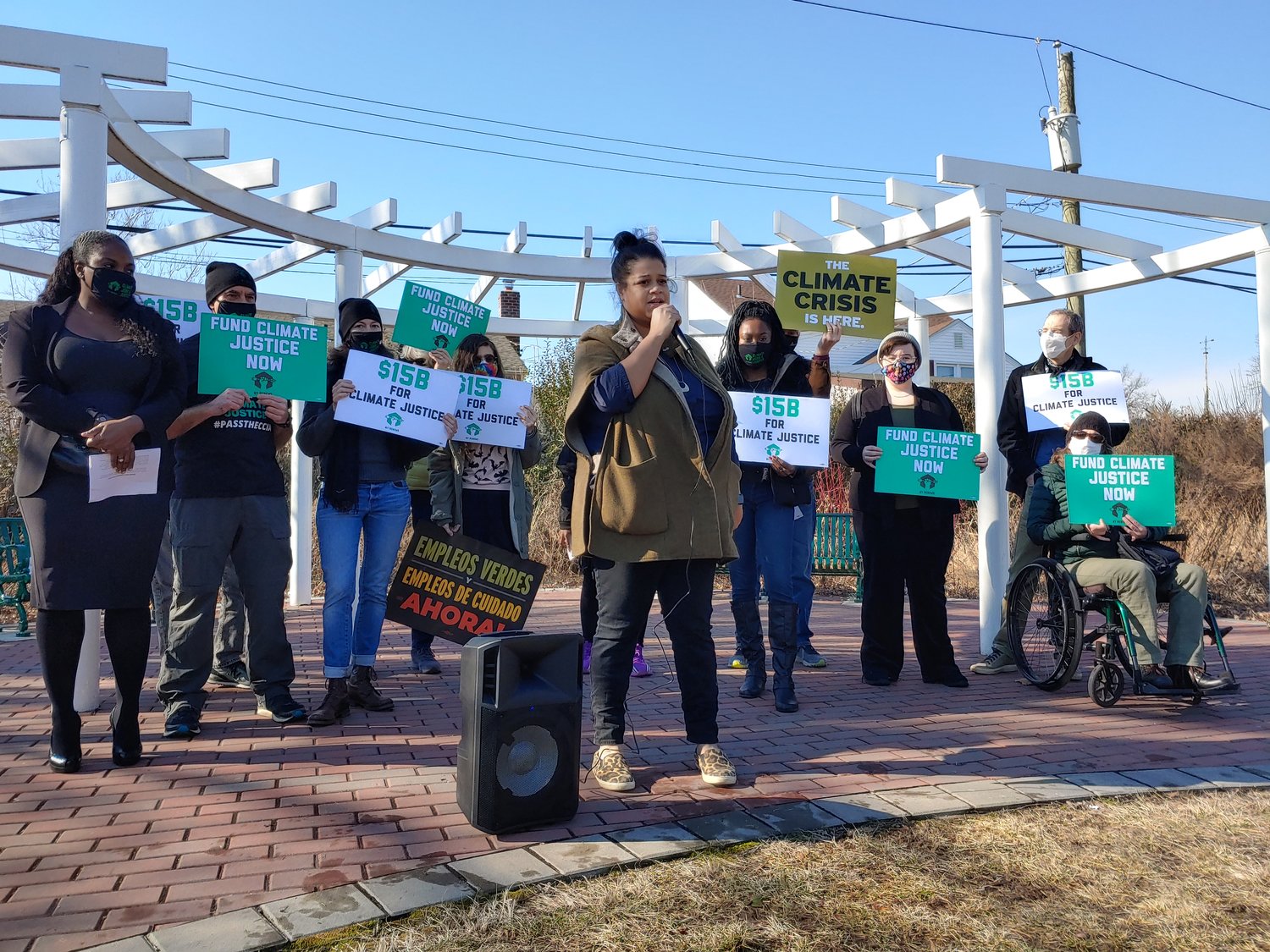 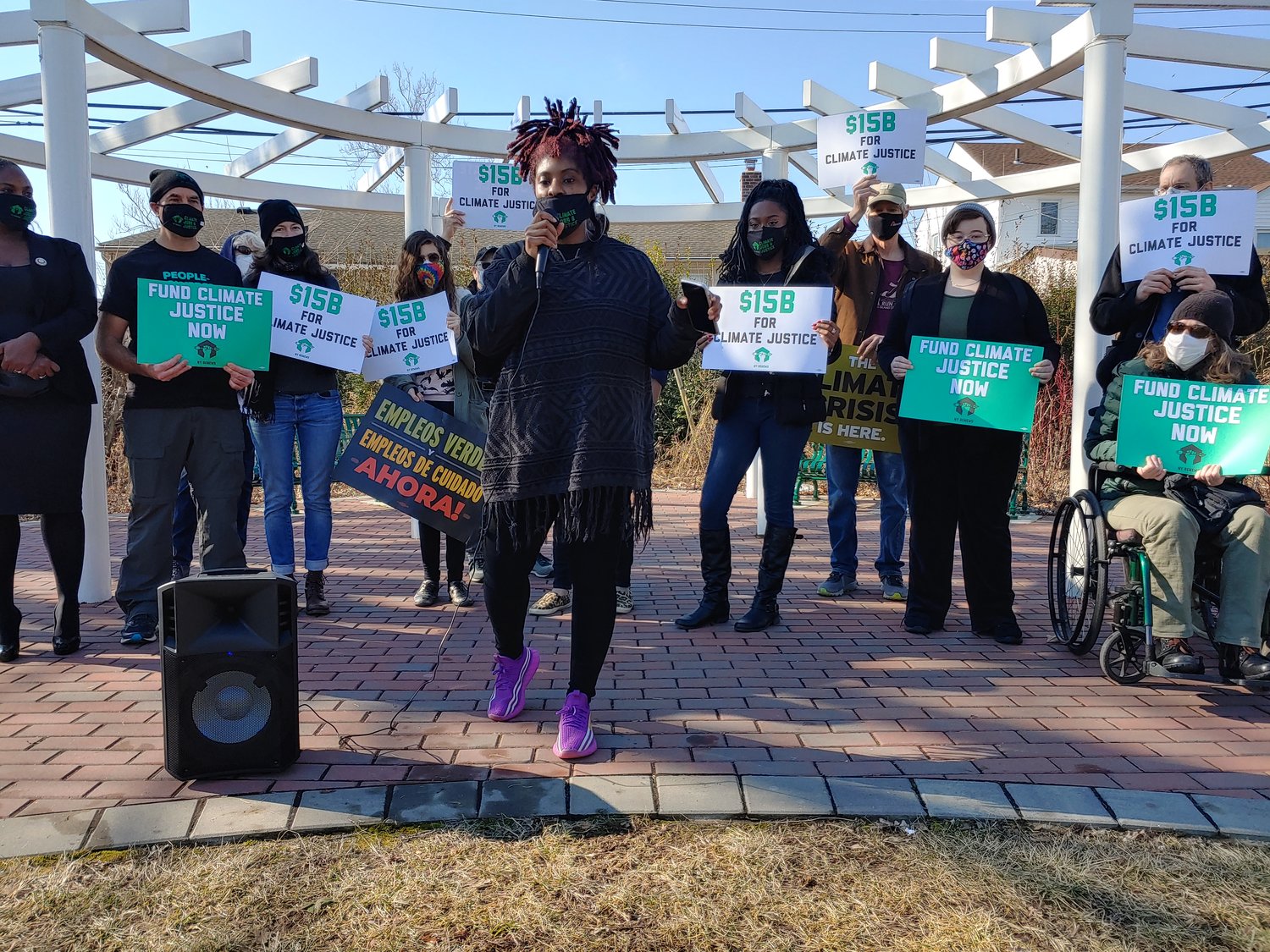 If we fail to get the money this year, it’s just a higher price tag next year.”
Monique Fitzgerald, Climate justice organizer
By Juan Lasso

Earlier this month, State Assemblywomen Michaelle Solages and Taylor Darling and climate activists from NY Renews hosted a news conference in Mill Brook Park in South Valley Stream to advocate for $15 billion in “climate justice” funding in the 2022-23 state budget.

Solages said she was trying to make a point by holding the conference and rally in South Valley Stream. When Hurricane Sandy tore through Long Island in 2012, high waters from Jamaica Bay surged up the tributary that runs through the village, flooding hundreds of South Valley Stream homes. To deal with the aftermath, the Town of Hempstead launched an aggressive $3.8 million, state-funded storm resiliency project. Then Lt. Gov. Kathy Hochul said that such mitigation projects were needed because, in light of what’s happening with the climate, Sandy was a preview of more extreme weather events to come.

The village saw officials from every level of government work to invest in resiliency and green infrastructure to protect residents and roll back the worst effects of climate change, according to Solages. Now the state government must make a bold investment to spread those efforts across New York, she said.

The proposed $15 billion would be broken down into four key areas of investment, according to Monique Fitzgerald, a climate justice organizer at the Long Island Progressive Coalition.

Hochul, now the governor, has pledged $4 billion in “environmental remediation and resiliency” through the Green Jobs Clean Air & Water Environmental Bond Act, a billion-dollar increase from last year’s bond act. But Fitzgerald said that investment “falls far short of what is needed” to move New York state on a trajectory toward achieving its goal of zero-emission electricity by 2040 and a reduction of at least 85 percent below 1990-level greenhouse has emissions by 2050.

Those goals were spelled out with the passage of the Climate Leadership and Community Protection Act of 2019. “We passed landmark legislation with the CLCPA,” said Solages. “That was great, but we need to back it up with dollars and cents.”

In fact, the CLCPA still lacks the funding it needs to meet its statutory mandates for decarbonization. Meanwhile, the New York State Energy Research and Development Authority estimates that a minimum investment of $10 billion annually, with increases every year, is needed to reduce communities’ climate risk. Lawmakers have still not supported climate action by using funds from the state budget, something Fitzgerald and a coalition of activists are trying to change.

“We scheduled about 70 lobbying visits across the state as a coalition, to speak to our legislators to make sure they understand the significance and gravity of this situation and the need for these $15 billion,” Fitzgerald said. “We are calling for Assembly Speaker Carl Heastie and Senate Majority Leader Andrea Stewart-Cousins to ensure that they put this forward in their proposed one-house budgets. Talks are ongoing … but we need more than just talk, we need action.”

Fitzgerald was unfazed when considering the amount of mobilization needed for the state to hit its clean-energy target.

“It’s a total reimagining or transformation of how we power our society, but the intention behind this is to save lives,” she said. “If we don’t bring down greenhouse emissions, we don’t have any guarantee of clean air or clean water or a guarantee of life and preservation of this earth.” Low-income and disadvantaged communities that suffer more from exposure to toxins, air pollution and lack of green space will continue to bear the brunt of environmental injustice, Fitzgerald added.

“And if we fail to get the money [to fund climate action] this year,” she said, “it’s just a higher price tag next year.”

Have an opinon about this issue? Send us an email to jlasso@liherald.com.