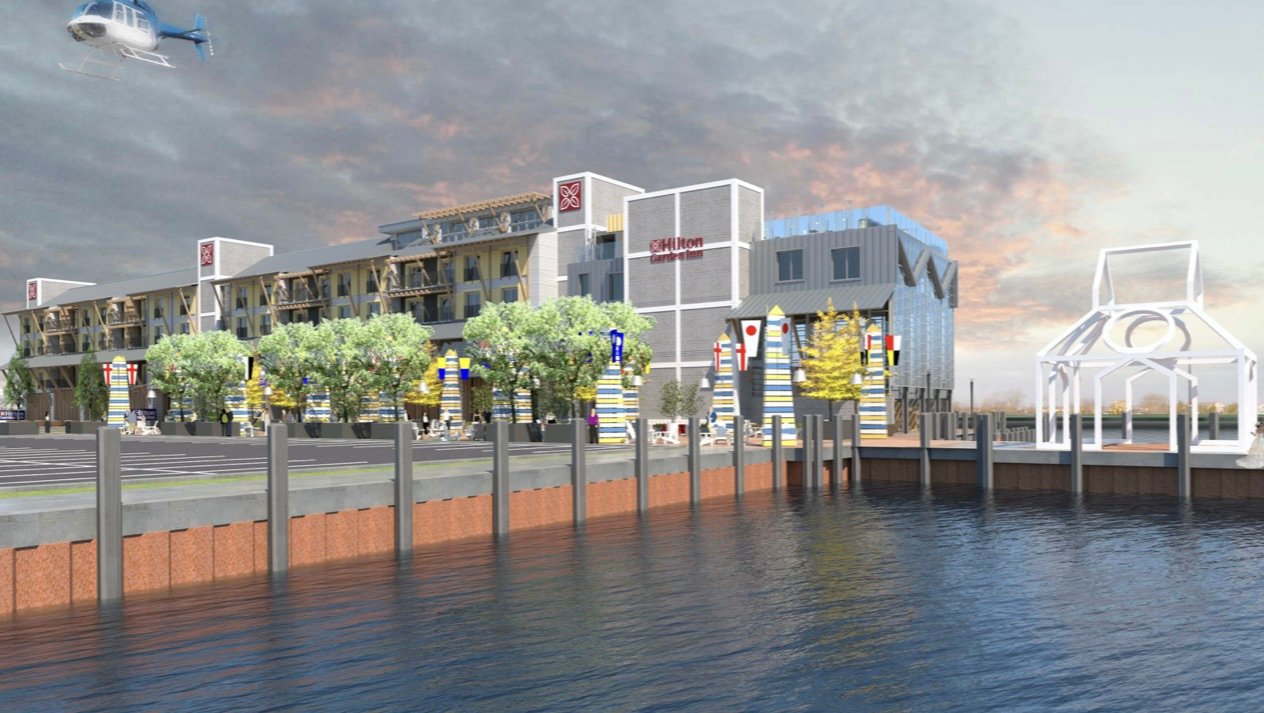 The architect's rendering of the proposed Hilton Garden Inn on the Nautical Mile in Freeport.
Courtesy NBD Holding LLC 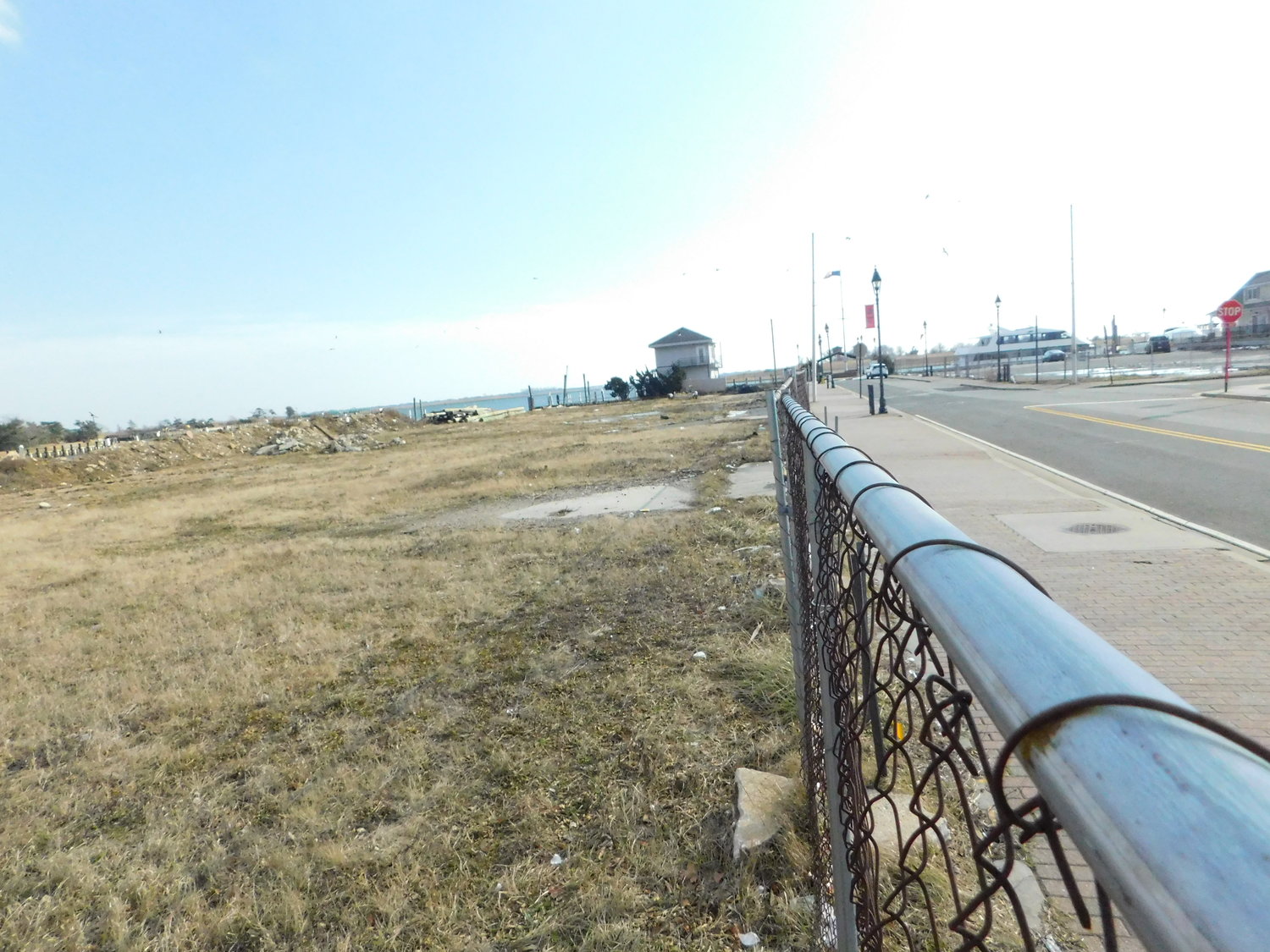 The long empty space where the proposed hotel would rise was once the site of The Schooner restaurant and the Hunter Pointe Marina.
Reine Bethany/Herald
Previous Next
By Reine Bethany

In 2012, Hurricane Sandy destroyed The Schooner, a 350-seat restaurant at the foot of Woodcleft Avenue next to the Hunter Pointe Marina. Neither the restaurant nor the marina recovered. Where the restaurant once stood, seagulls now soar over a large muddy field that is separated from the sidewalk by a tall chain-link fence.

The unused space may soon be occupied by a hotel and conference center after the Town of Hempstead Industrial Development Agency gave preliminary approval Jan. 31 for economic development incentives to support the hotel’s construction.

The benefits, which were granted to NBD Holding LLC, are subject to further IDA review, a public hearing and final authorization resolution.

The Village of Freeport has granted site plan approval for the project. Completion is anticipated in spring 2024.

“This is a great project that will develop the vacant tract that once housed the Schooner Restaurant,” said Fred Parola, excecutive director and CEO of the Town of Hempstead IDA. “If granted final approval, it has the potential to revitalize a part of the Nautical Mile that needs a shot in the arm. It will bring tourists and business travelers who will infuse the local economy.”

A series of recent Facebook posts on Freeport pages expressed the objections of some villagers to the project. Chamber of Commerce President Ben Jackson, who supports the construction, acknowledged the objections and addressed some of them in a recent interview.

"First off," posted Rosemary Arcuri, "they need to get down the street before they can even think of parking.  Between narrow one-way streets and flooding at high tide -- Good luck."

“They [the owners] are going to raise up the building to have parking underneath,” Jackson said. “Combined with off-site hotel parking, which is just across the street and a little bit around the corner, they were able to manage to have all the parking they needed. So they really have the right to build this.”

The problem of streets flooding has been mitigated by the installation of subsurface water pumps and backflow valves in the southern portion of the village during the last two years.

"Keep hearing about this but nothing ever happens and I hope it doesn’t," posted Amanda Bresin.

“[The owners] just got the permits,” Jackson said. “The [New York State] Department of Environmental Conservation won’t let them start construction yet, claiming there’s winter flounder in the water, so the delay is an environmental issue.” Jackson thought May would be the starting month.

Don Schleich posted, "The sewage system can't handle the mile as it is, this should shut down the whole block."

“Substructure,” said Jackson, when asked to name another root of opposition to the project. “I understand the mayor is talking about doing something with the sewer line. There was a business in the past that accidentally punctured a sewer pipe while building a bulkhead. So that became a major problem down here, and then finally the mayor dug it up and fixed it, took care of everything. … There’s been a lot of concerns going around about the utilities and things like that, but I’m talking to the mayor and I believe they’re being addressed. He’s been working very closely with the Department of Public Works, upgrading, providing what’s necessary for the hotel to be there.”

Patricke Lawless asked, "When did capitalists ever think about how their decisions would affect anybody?"

Jackson pointed out that the village cannot completely control what happens to a patch of land within its limits. If a legitimate business complies with codes and regulations, it has the right to build.

“You have this piece of property,” said Jackson, “it’s privately held, somebody’s got to do something with it. The way the empty field sits now, it’s not healthy, it’s not pretty, it’s not helping anybody. At least a hotel will give support for local businesses and people will come to Freeport from out of town.”

Jackson also said that the hotel would have its own marina, adding to its business draw.

“Transient boating, it’s very common,” he said. “There are people who travel from Florida, come through here all the way up to Maine. They come into the East Rockaway inlet, and they stay inside it as much as they can, obviously for better weather and places to stop and stay. So the hotel marina could make the Mile more of a destination.”

Not all the Facebook comments were opposed to the project. Many people’s posts speculated that the new hotel would benefit their village.

“My understanding is that the owners are excited to get started,” said Jackson, “and I’m excited to see it happen. Most people I talk to think it’s a great thing for the village.”