Volunteer your time to restoring the South Shore's wetlands 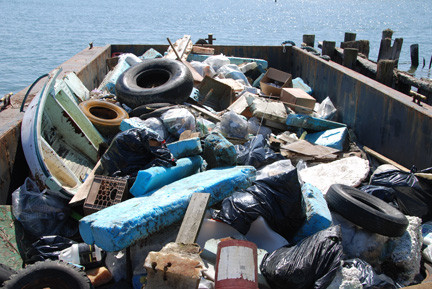 Hurricane Sandy led to one of Long Island’s worst environmental disasters ever, if not the worst. Sandy’s massive storm surge flooded hundreds of South Shore homes. Fuel oil tanks broke loose and floated away, spilling oil as they went. Cars were flooded as well, which sent a witches’ brew of chemicals spilling out. Sewage leaked from the Bay Park Sewage Treatment Plant.

And then there was the debris. The surge, which reached as far north as Merrick Road, picked up anything and everything and carried it all into the ecologically fragile wetlands that hug the South Shore. Now these saltwater marshes, which are vital to our fishing industry because they serve as breeding grounds for a host of marine life, are full of debris. Freeport SPLASH (Stop Polluting Littering and Save Harbors) estimates that the storm deposited more than a million pounds of garbage in the wetlands.

All of it must be cleaned up. Freeport SPLASH, which formed in 1990 for just that purpose, is committed to restoring the wetlands to their former state, which was not pristine, but a whole lot cleaner than they are now. But the organization, which has 2,000 members and 350 active volunteers, could use all of our help in this truly monumental task.

Operation SPLASH will hold its 23rd annual “Op-SPLASH” cleanup of South Shore wetlands on Saturday, March 16, from 9 a.m. to noon. The rain date is March 17.

During Op-SPLASH, volunteers scatter across the small islands that line the coast, collecting trash. Before this year’s cleanup, volunteers will meet at the Freeport Museum, at 202 Woodcleft Ave. Waterproof boots and work gloves are strongly suggested; sneakers won’t be allowed. Children must be at least 12 to participate and must be accompanied by a parent or guardian.

Save the date, and help restore Long Island’s wetlands.