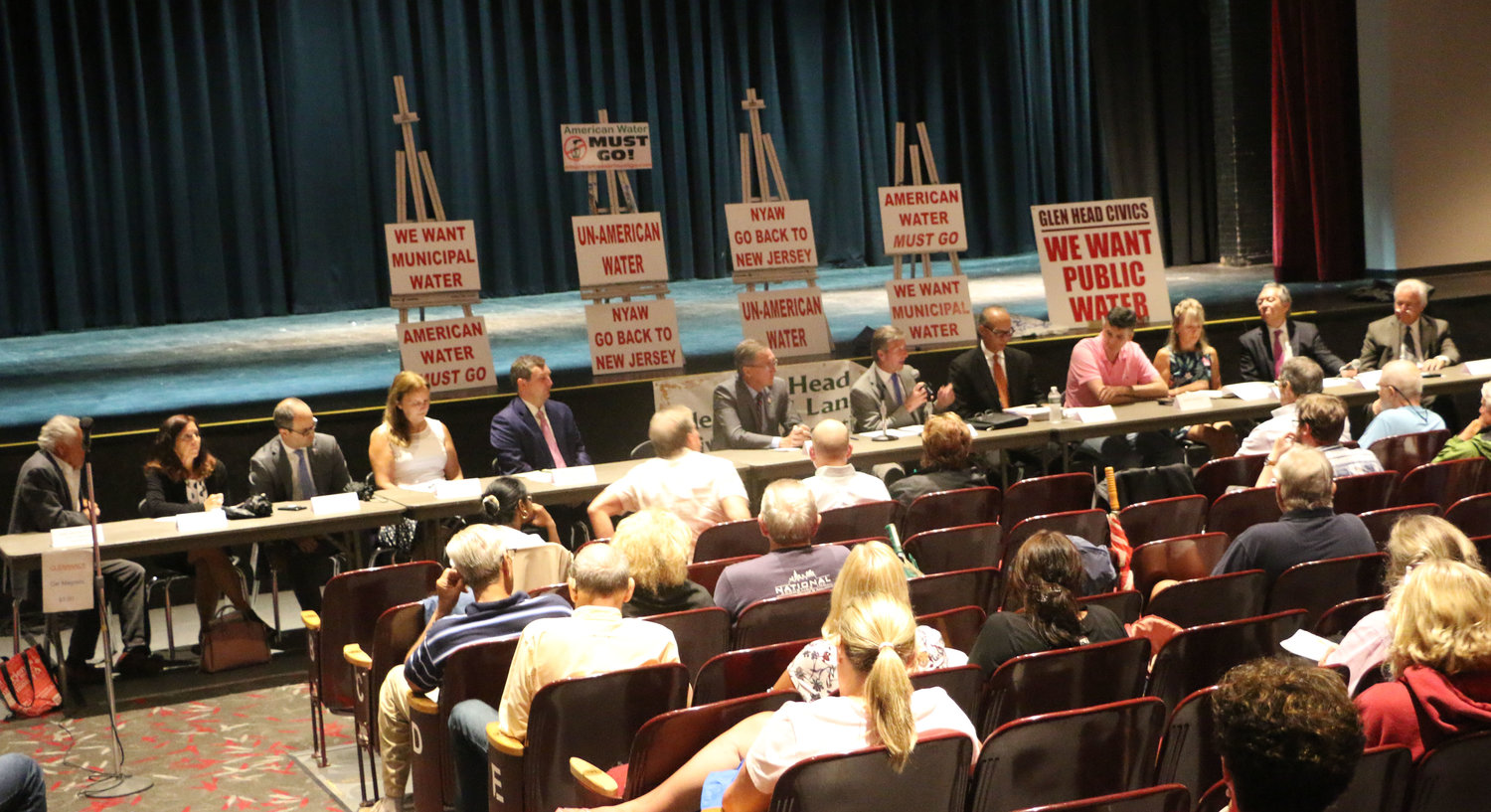 Many ratepayers in the North Shore Water District have been opposed to New York American Water’s presence for years, and are encouraged to see their representatives come together to bring public water to the area.
Courtesy Joe Lopes

The fact that both sides are coming together — this is really the way our country should run.”
Agatha Nadel Co-director. North Shore Concerned Citizens
By Mike Conn

North Shore residents are not alone in their desire for a public water authority. Their representatives are working together on a state level. Assemblyman Michael Montesano, a Republican from Glen Head, announced on Feb. 12 that he would co-sponsor a bill to establish a North Shore Water Authority. The measure was introduced by Assemblyman Charles Lavine, a Democrat from Glen Cove, and co-authored by State Sen. Jim Gaughran, a Northport Democrat.

“For too long, residents of Long Island have been kept in a vise-like grip by New York American Water,” Montesano said in a news release. “This is the first step in relieving those who have had costly and unfair charges imposed upon them by American Water.”

Gaughran said that Montesano’s involvement was significant. “I’m glad that Assemblyman Montesano is joining in this effort,” Gaughran said, “and I think that will be very important in having this passed.”

If the bill passes the Senate and Assembly, it will be sent to Gov. Andrew Cuomo. If Cuomo signs it, Gaughran said, the new water authority will purchase New York American Water’s infrastructure and hire its own workforce. The authority could contract with surrounding water authorities until that process is completed.

Montesano said he has taken residents’ concerns to heart, especially when it comes to the price of water in the district. “This is what the public wants,” he said. “They want to turn it into a public water authority because it will be non-taxable, which means people will get 50 percent off their bill right at the get-go.”

Because NYAW is a for-profit company — the only one still providing water on Long Island — Montesano said that ratepayers would see bills that were an additional 10 to 20 percent smaller from a public authority.

“From the very beginning,” Lavine said, “it’s been painfully obvious that the only way to municipalize the delivery of water services for the American Water ratepayers is either the Town of Oyster Bay making [an] eminent domain [claim] or the establishment of a water authority.”

Aside from the sharp decrease in water rates under a public entity, Gaughran explained, the district would also be eligible to receive state aid to purify the area’s water. Long Island has the most polluted drinking water in New York, and residents who receive water from private companies are not eligible for any of the over $400 million the state has dedicated to addressing water contamination in the area by dioxane and other harmful compounds.

Members of North Shore Concerned Citizens, local volunteers who are opposed to NYAW’s operations, said they were pleased with their representatives’ efforts in the fight for public water. “It’s about time,” said NSCC President Bruce Kennedy, who is also the Sea Cliff village administrator. “It should’ve been introduced and passed last year, and I’m very excited that Assemblymen Montesano and Lavine are working in a nonpartisan way for the people of the Sea Cliff Water District.”

Water is a basic human right, Kennedy added, which politicians of any party should recognize.

NSCC Co-director Agatha Nadel said she was ecstatic about the bipartisan support for the bill. “The fact that both sides are coming together — this is really the way our country should run,” she said. “This is just glowing with what the country can do.”

Nadel said she was feeling “cautiously optimistic” about the bill’s progress in Albany. “Nothing is guaranteed with the water fights,” she said. “For whatever reason, until you cross that finish line, you’re sort of holding your breath … I’m keeping my fingers crossed, and truly hoping this gets passed as quickly as possible so we can continue the momentum on the way to affordable public water.”

Gaughran and Lavine said the bill likely would not be taken up by the Legislature until late March or early April, because the current focus in Albany is on passing the state budget by April 1. All three representatives said they were confident, however, that the measure would move smoothly through the Senate and Assembly and on to the governor.