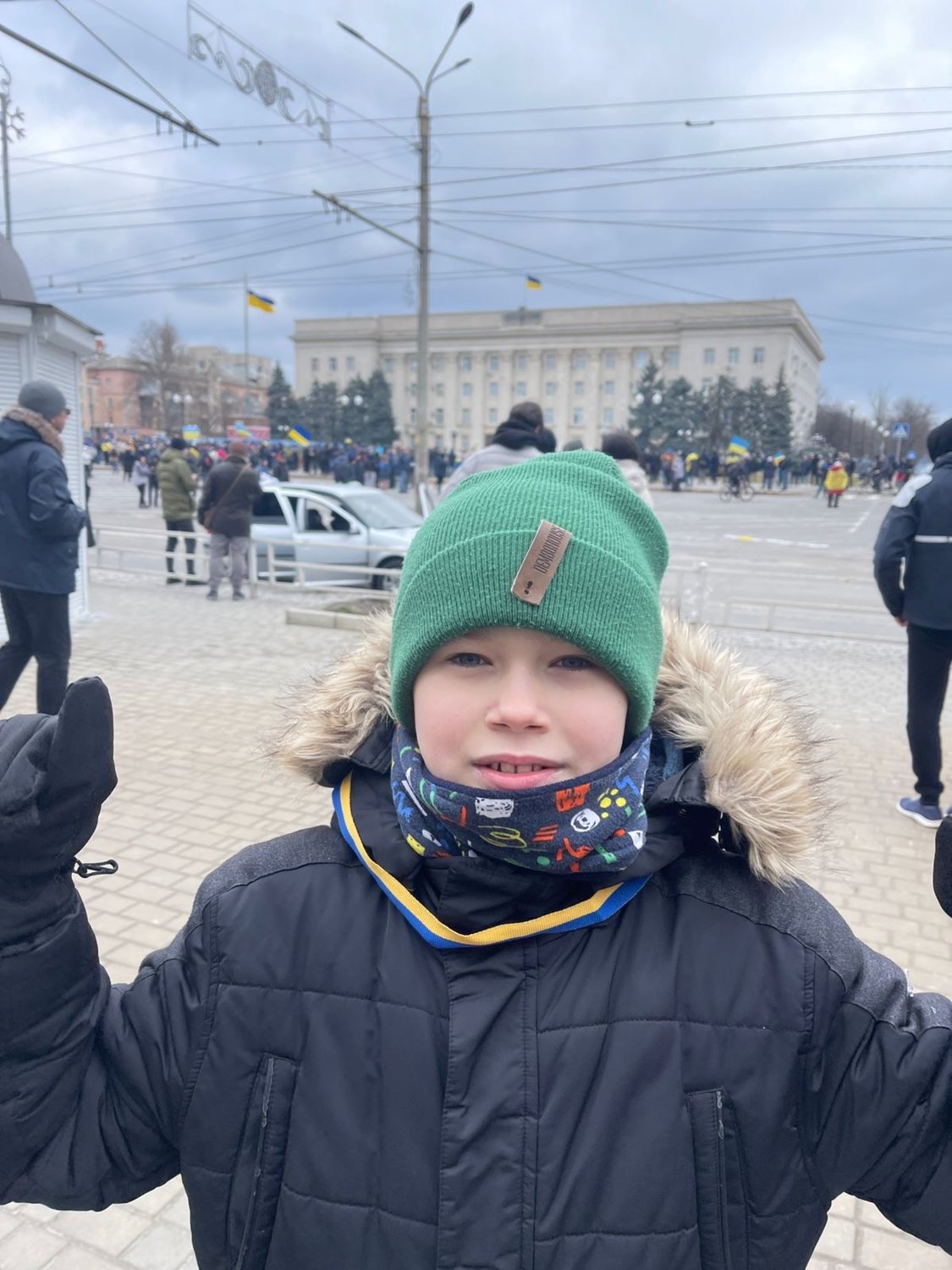 Yegor attended an anti-Russian protest in Kherson before his family fled the city.
Courtesy Anna
By Will Sheeline

Since the invasion of Ukraine by Russia, over 5 million Ukrainians have become refugees. Now, Sea Cliff and the Love Your Neighbor Project have opened their arms to one of the families that were forced to flee.

Members of the family, now living temporarily in another family’s basement in Sea Cliff, asked to be identified by first names only. They are from the city of Kherson, traditionally a major port and an exporter of grain. When the invasion began, Anna left the country with her two children, Polina and Yegor.

In an interview, Anna recalled in Ukrainian-accented English how hectic those first days were, and the stress of packing bags for herself and her family, not knowing how long they would be gone.

“I try to pack everything, because not sure where we going, what we’re needing,” Anna said. “I pack many shoes because I think where are we going to buy more? Thankfully my daughter same size as me, so I saved space.”

Anna’s husband, Dmitry, is still in Ukraine, because he is of military age. He remains in Kherson, which is occupied by Russian forces, where he is working for a grain exporter and also looking after Anna’s parents.

Anna started crying when she spoke about the last time she saw her parents, explaining why they decided to stay behind. “They could have come with us,” she said, “but they say no, give our seat to mother, to children. It was night, I held them so tight, I still remember.”

Anna and her children drove across Ukraine, through numerous military checkpoints. They stopped in Bucharest, Hungary, where they stayed in the airport for three days. Then, through a friend of a friend, Anna was invited to Glen Head, to stay in a private home there while the family was away.

Arriving in the U.S. on April 4, they stayed in the Glen Head home for three weeks. While there, Anna was put in contact with Aimee Mitchell, a student counselor for the North Shore School District.

Mitchell has been working with the family, getting the children ready to take classes at North Shore Middle School. The district, she said, has been a great help, purchasing school supplies for them, connecting them with trauma counselors and trying to give them as normal a school experience as possible.

“The school has been phenomenal, I have to say — they just jumped right in,” Mitchell said. “It was like, all hands on deck, whatever could be provided for them.”

Mitchell also reached out to several local mothers to help her raise money for the family. After raising $1,500, one of the women put Aimee and the family in contact with Jaime Teich, chief “neighbor” of the Love Your Neighbor Project.

Love Your Neighbor, a grass-roots nonprofit founded in 2020, at the height of the pandemic, helped those who were struggling provide their families with masks and hand sanitizer. Since then it has expanded to take on a variety of community-related issues, and Anna’s family’s struggle is the latest.

Teich and the Love Your Neighbor Project helped raised another $5,000 for the family, from more than 100 donations from Sea Cliff residents. While trying to find them more permanent housing, Teich has also been in contact with Anna nearly every day, seeing what can be done to make her life easier.

“The struggle this family has had to go through, like so many Ukrainian families, is just heartbreaking,” Teich said. “We just want them to know that this is their home for as long as they need it to be, and we just want to support them.”

Anna, Mitchell and Teich all noted how helpful the Sea Cliff community has been, with residents going above and beyond to make the refugees feel welcomed and comfortable.

“The people of Sea Cliff are amazing, so wonderful and kind,” Anna said. “Every day I get little gift from them, a card on Easter, clothes for children. Is truly lovely.”

To donate to the Love Your Neighbor Project and to help Anna and her family, go to www.lynp.org/get-connected.