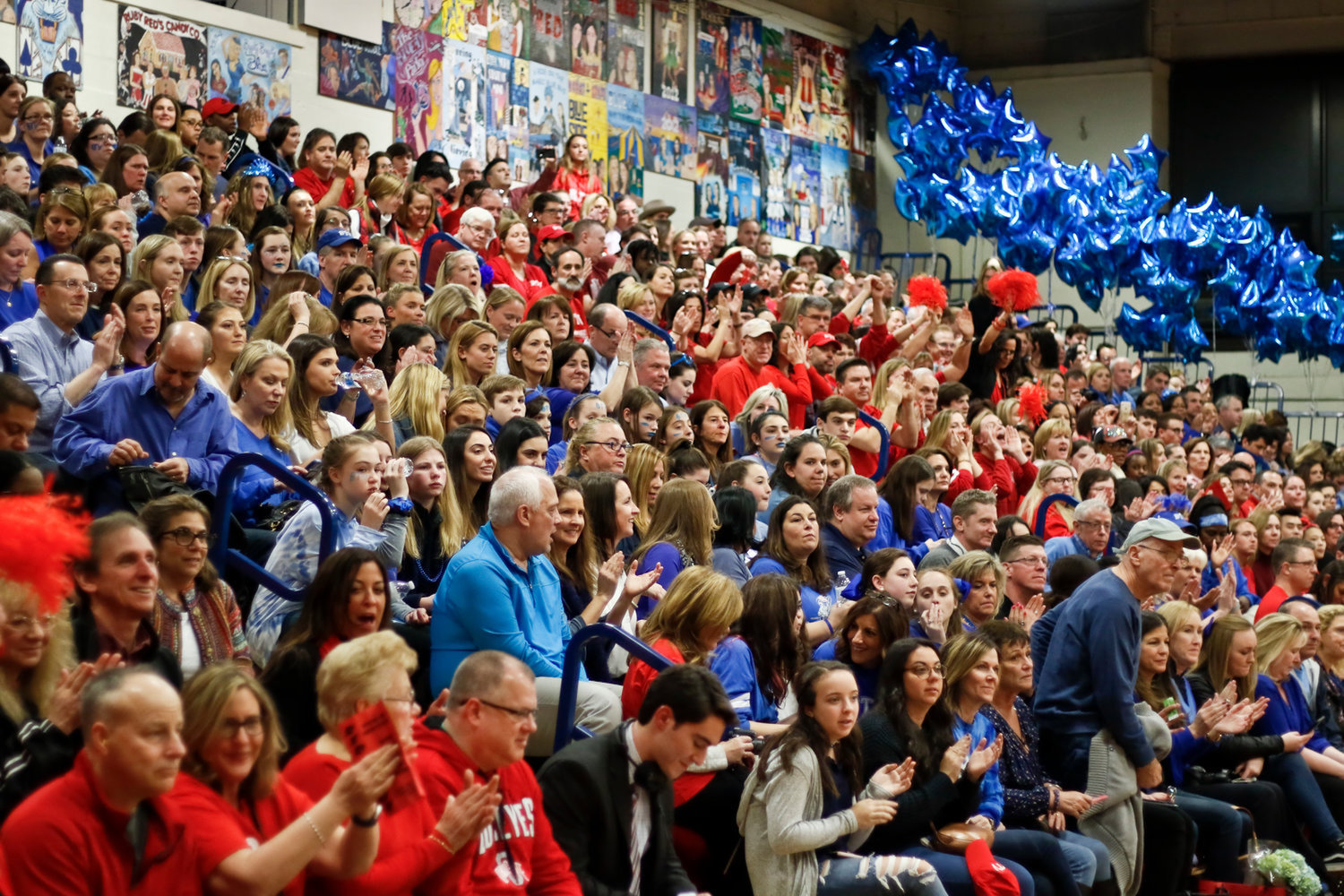 After parents and students expressed disappointment over a tentative plan for the annual Red and Blue competition in March, school officials said they were still mulling options on how to ensure safety while keeping the tradition alive, which includes coming up with a policy on spectators. At left, hundreds of people attended a past event.
Herald file photo
Students weigh in

“When you’re driving around town during Red and Blue season looking at all the signs, it made us want this so badly for such a long time. So, when we saw the rules released, showing that Red and Blue isn’t going to be as normal as even our regular school day is, it made a lot of us want to make that change for everybody — not just ourselves.”

“I’ve had Red and Blue in my family as far as I can remember. My aunt was a senior aerobics coordinator when I was 3 years old . . . When these rules were put out without our knowledge, I was very disappointed to see that it was not as normal as I was hoping for it to be. All of the girls in the community deserve a normal Red and Blue since Covid numbers are declining, and we’ve been through so much as a community that we deserve a Red and Blue that is traditional to this district."

“I think the board really heard us and that gives you such a sense of accomplishment because we all prepared for this and we all look forward to it every year. It’s exciting to see that our voices were heard and that our statements could make a change."

Rockville Centre school officials are mulling how to safely host the 106th annual Red and Blue event while staying true to its traditions amid the unpredictability of the continuing coronavirus pandemic.

Several students and parents voiced their opinions at the Jan. 13 Board of Education meeting, after school officials sent out a tentative plan on Jan. 7 with many changes to the competition, including eliminating events that were deemed unsafe for students and cutting the event back from three days to one.

Most who spoke at the meeting said they were unhappy about making Red and Blue a one-day event. Some were outraged. According to the South Side High School calendar, the original plan was to have a Revue on March 3 and events on March 4 and 5, but school officials’ tentative plan is for a one-day competition on March 6.

Board of Education President John O’Shea said that the plan was tentative, and would not be finalized until closer to the event. “As of right now … this board has not spoken about Red and Blue to the public or made any determination on how it’s going to go,” O’Shea said at the meeting.

Red and Blue was first organized in 1917, as an alternative to sports at a time when girls were not allowed to compete. The event usually involves three nights of competition in dancing, skits, songs, relays and other athletic events. Last year it was scaled back due to coronavirus restrictions, and the highly transmissible Omicron variant has left school officials seeking input on how to manage the event this year.

One of the activities that may be canceled, or changed, is the tumbling competition. District Athletic Director Carol Roseto said she had met with past event organizers at length before releasing a tentative plan for this year, and noted that tumbling involves 12 girls and four alternates, and that it would be a safety hazard for them to perform while wearing masks, which would affect their peripheral vision. Roseto added that the school wouldn’t want them to practice or perform without masks because of the viral risk.

SSHS senior Noelle Cairnie said she had been looking forward to competing in Red and Blue as a captain since she was a fourth-grader, and that she enjoyed competing in tumbling as a freshman and junior. “I know myself and a lot of other girls had hopes for a more normal event this year,” Cairnie said. “I really thought that running for captain this year, I would be running during a normal year and not one with so many restrictions. So I think it’s really awesome that so many other people agree with that, and want normalcy again and want to push forward with a normal life.”

Senior Ella Levine said she had also been looking forward to competing under more normal circumstances after a wildly different version of the event in 2020. “Since I didn’t get to do it last year, I just really want the experience of having it normal this year,” Levine said, “so I can create something that I have such a passion for.”

Roseto acknowledged that the tentative plan had its detractors, but she stressed that nothing was finalized, and that officials were trying to navigate an uncertain time. “These are not normal circumstances, and our choice is to either cancel the program for the year or to adapt the program to reflect the crisis and execute it under regulated guidelines,” she said. “It’s important for the community to understand that many, many hours of weighing the pros and cons went into the initial plans, and nothing was taken lightly.”

Roseto also said that this year’s event will see many improvements over last year’s, which include enrollment being open to all freshmen through seniors, and the ability for the girls to practice at seven locations in the high school two nights per week for more than three hours, so they can prepare safely for the competition. There is also the opportunity to livestream the events, as a way to reduce the number of people who will attend in person and ensure that if families can’t come, they can still watch the students perform. The district also added back more relays — excluded in the original tentative plan — which will give participants the chance to decorate and accessorize their costumes and purchase prop materials, which wasn’t allowed last year.

Board members said they had yet to finalize the policy on spectators, but will revisit it as the date approaches, because state Department of Health guidelines will likely change by March, with health experts predicting a decline in Omicron cases in the coming weeks.

The district’s acting superintendent, Robert Bartels, said the board planned to continue an open dialogue about the event as it gets closer. “We are striving to make it the best we can for students while we’re still in this pandemic,” Bartels said. “I do need to note that the health of the students and the continuing ability for all of them to participate has been key in planning this year’s activities. We are concerned about students gathering during preparations for this event, contracting the Covid virus and being quarantined, preventing them from participating.”