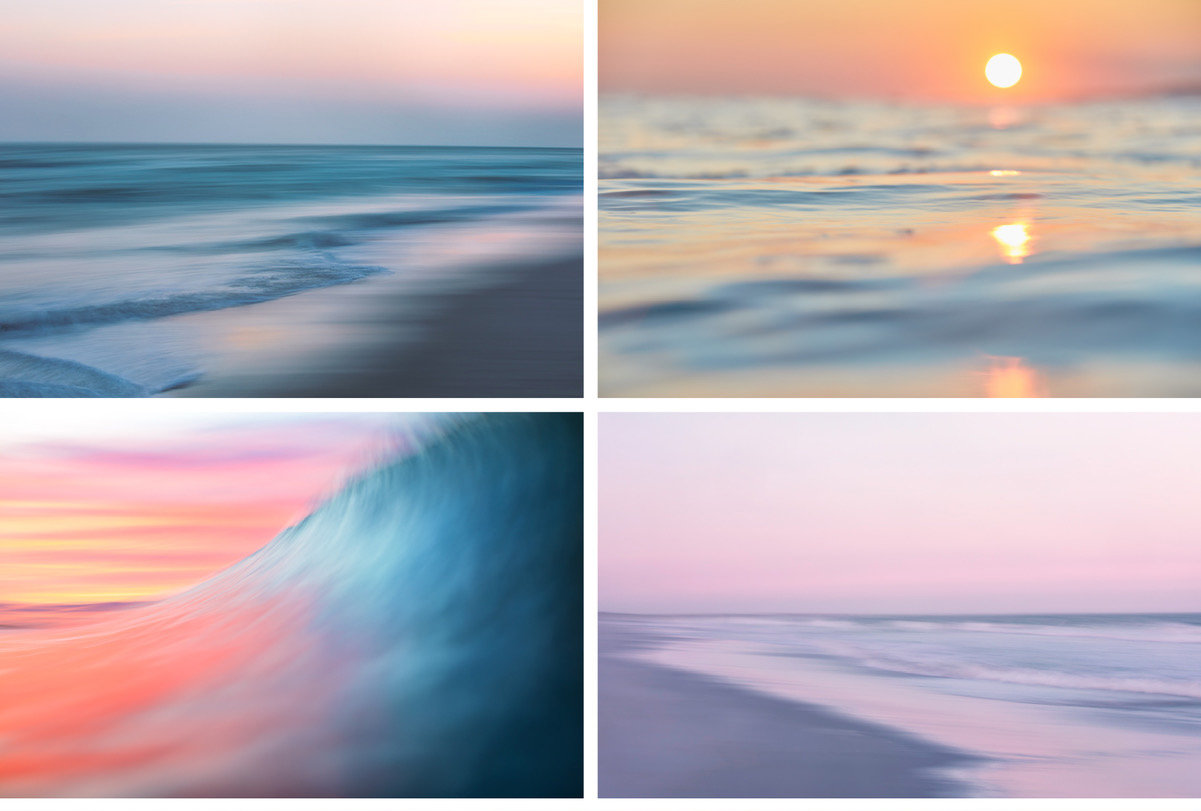 Weiss’s work embodies his lifelong appreciation for the ocean. The images, captured from within the water using a pair of fins and a waterproof housing, feature Weiss’s unique take on the water. They are intended to leave the viewer feeling peaceful and serene, or alternatively, awed by the ocean’s power.
Courtesy Danny Weiss

What I plan to do is evolve this project. I’m very interested in continuing to work in the water.”
Danny Weiss, photographer
By Annemarie Durkin

Port Washington-based photographer Danny Weiss will display a collection of his photos at K. DiResta Collective in Sea Cliff beginning Nov. 6. This is Weiss’s second time exhibiting his work to the public.

This body of work revolves around the ocean, specifically the Atlantic waters off Long Island’s South Shore. Most of the work is captured at sunrise, sometimes at sunset, but almost entirely with Weiss in the ocean, surrounded by waves as he is capturing and documenting them.

“I’m always out there shooting whenever there is either a beautiful sunrise or sunset that I can somewhat guesstimate when they may be and if there are waves,” Weiss, 45, said. “I follow the waves by looking at the weather, and there are apps that track the waves. I can plan to always capture it.”

Weiss’s work embodies his lifelong appreciation for the ocean. The images, captured from within the water using a pair of fins and a waterproof housing, feature Weiss’s unique take on the water. They are intended to leave the viewer feeling peaceful and serene, or alternatively, awed by the ocean’s power.

“I just decided I’ve got to document this. I have to capture and share what I’m seeing with others,” Weiss said. “In the beginning, I shot from the shoreline and then, already having some experience with shooting in the ocean, I just took my water housing in and went for it, and it’s been an incredibly rewarding experience.”

About a year ago, during the peak of the coronavirus pandemic with extra time on his hands because of the loss of commercial photography opportunities, Weiss brought his waterproof camera housing into the ocean and started documenting the waves, almost as portraits.

“In the beginning, it was just a fun little side project to do, a way to keep creative and keep busy during an obviously challenging time for everyone,” Weiss said. “The body of work grew and grew and frankly the feedback was incredibly positive, which was inspiring to keep going.”

A professional actor throughout his 20s, Weiss married in New York and then moved to California with his wife, Liz. In 2004, as a birthday gift to him, Liz signed him up for an adult continuing education photography class. By week two of the class, he was enamored by it. “To be frank, acting is brutal, and it was really kind of kicking my butt after a decade,” Weiss said.

Weiss quickly changed careers and has been a professional photographer ever since.

“When acting, it’s something that you don’t know what you’re doing in the moment, you don’t know if you have a good performance or bad performance. With photography, what I appreciated so much is that you can take a picture, you can look at it and you know you did a good job, you can say, ‘That’s a good picture, I’m really proud of that,’ and you can revisit it too.”

On exhibition is a new series of images, the third in an ongoing project of Weiss’s focused on the documentation of waves and the ocean.

“Last summer during the pandemic and everything, my boys [Elijah, 17 and Caleb, 12] had a little extra time on their hands, so they started getting really interested in the ocean and surfing. Having just been around them in the sport, and by the water, I started hearing rumblings of this storm, this hurricane blowing through, that would create these amazing swells, just amazing waves,” Weiss said. “So, in early September, a little over a year ago, I went down one sunrise and parked my car, and even before I got to the beach I could hear these amazing waves crash on the shore. I eventually crested over the dune and saw something that I’d never seen my life before—these amazingly majestic, beautiful and powerful waves, and I was hooked immediately.”

He said he hopes to capture some images in the coming days that may still be able to be included in his show in just a few weeks. He noted that while the collection of photos chosen for the exhibit is locked in, “if I capture something really amazing, I may very quickly print it up to exhibit as well,” Weiss said.

To celebrate the opening and Weiss’s second-ever fine arts show, K. DiResta Collective is inviting the community to meet Weiss at a wine and cheese reception at 6 p.m. the evening of the opening. A selection of the gallery images are not yet available on his website, but can be viewed and purchased exclusively at the gallery. Weiss’s work will be on view through Nov. 30.