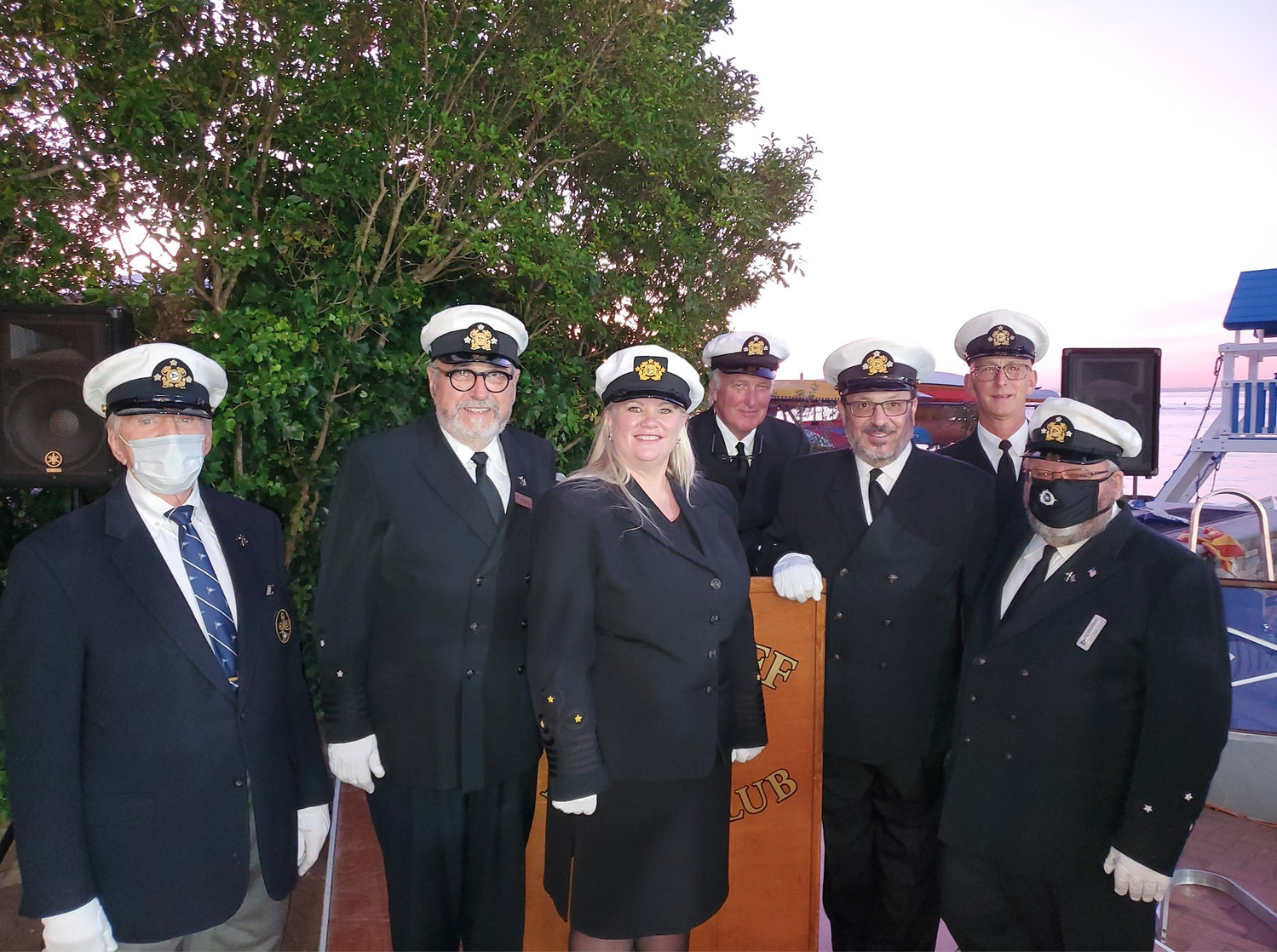 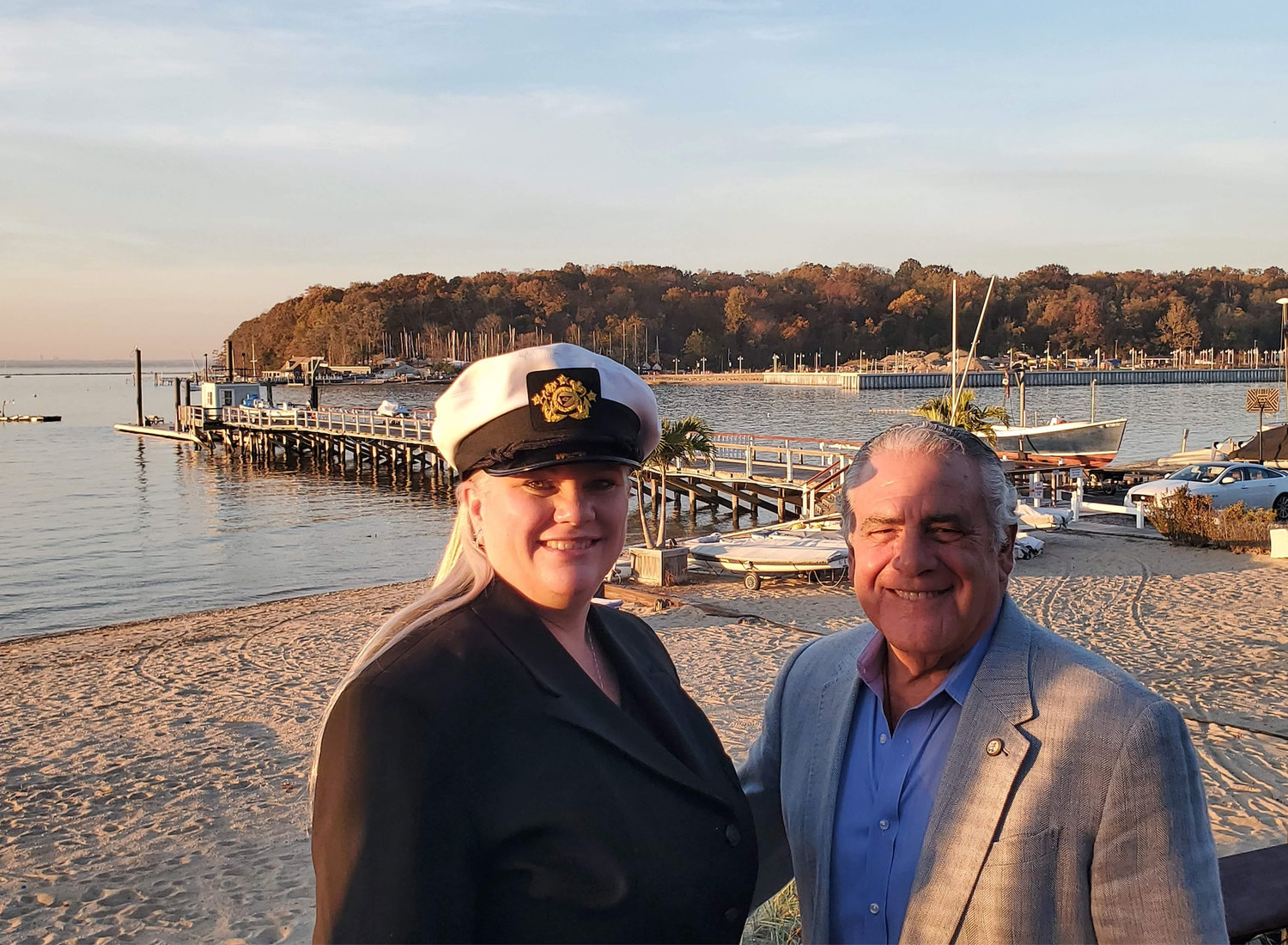 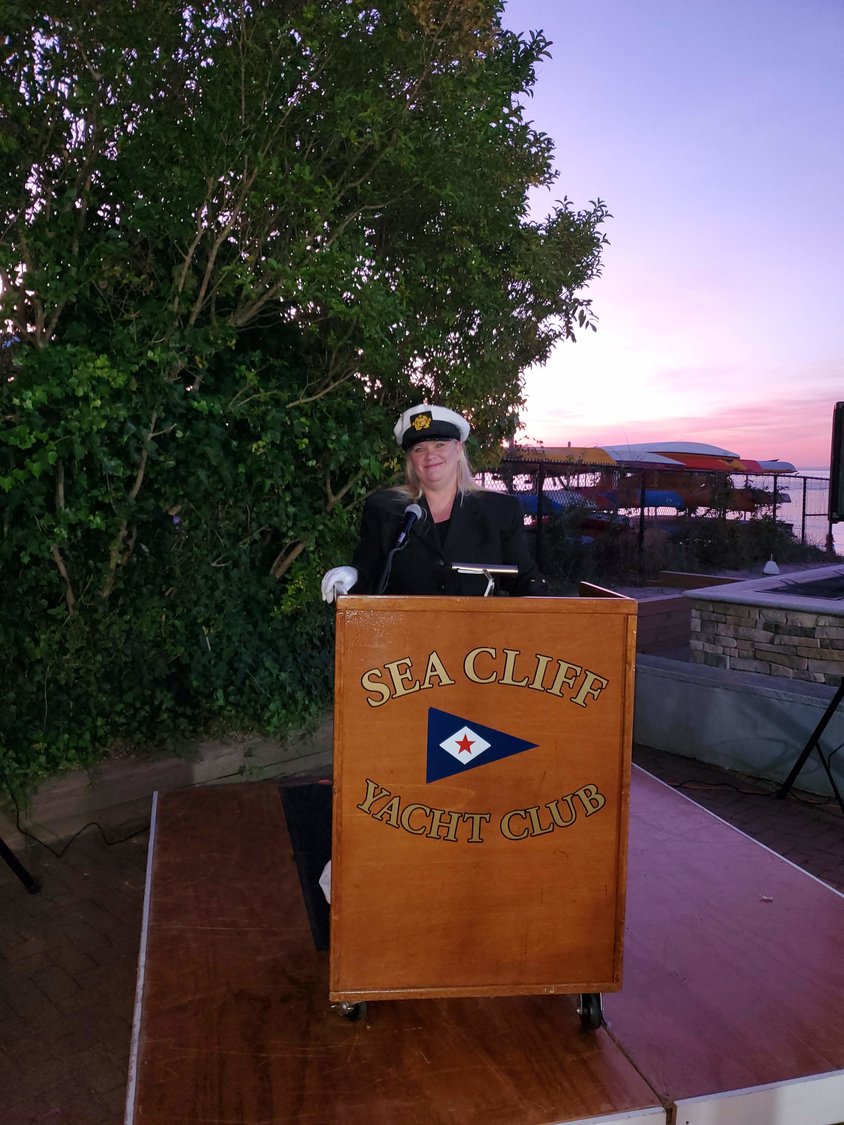 Maynard said she would do all she could to make sure the Sea Cliff Yacht Club continues to succeed.
Courtesy Kathleen Dickson
Previous Next
By Mike Conn

Over its 128-year history, the Sea Cliff Yacht Club has seen a multitude of changes, from its membership to its programming to its community service projects. One of its constants, however, has been male leadership. That changed last Saturday, when Robin Maynard was named the club’s first female commodore.

“It really, truly is an honor, and it was important to me also to be a role model,” Maynard said. “Boating is a male-driven sport, and it’s nice to push female boaters and female sailors [forward].”

Maynard, 48, said she has been a member of the club for 12 years, and has sat on its board in various capacities for the past decade. Although she grew up relatively far from the water, in West Orange, N.J., she said she has always been drawn to the ocean. Sea Cliff’s proximity to the water, she said, and her love of its Victorian architecture were what brought her to the village in 2000. Whether she is out on one of her three sailboats, her powerboat or her scull, she said, she feels at home on the water.

“Being on the water is just a special thing,” Maynard said. “It’s very relaxing. There’s no better view than sunset at the Sea Cliff Yacht Club.”

Although she began sailing several years before joining the club, Maynard said she became a member when her daughter, Samantha, was 2 because she wanted her to get involved in boating early. Samantha, now 15, rows competitively at the private Kent School in Connecticut.

Bringing rowing to the yacht club is one of Maynard’s goals. She also wants to improve the club’s beach area with new furniture, she said, and update its dining room.

While the coronavirus pandemic has made things difficult for the club and its 175 members, Maynard said it is very proactive in its health regulations. A committee of doctors has put a number of procedures in place, she said, including temperature checks, distancing of tables, thorough cleaning and limiting capacity, and a tent equipped with heaters will augment club capacity as the weather gets colder.

Harvey Bass, a member for 34 years who served as commodore from 2012 to 2014, said that Maynard has shown her dedication over the years as a board member. She has a strong operational background, Bass said, having served on a number of committees, and has even made financial contributions. Her ascension to commodore is a milestone, he said.

Maynard is a no-nonsense person who gets things done, Bass said, and is very inventive when it comes to creating events. For Halloween she created a “trunk-or-treat” event in which members decorated their vehicles and children made their way around the club parking lot collecting treats. She enjoys bringing the club’s families together for all sorts of programs.

“The Sea Cliff Yacht Club is year-round,” Bass said, “so you have to have a person who inspires people to come by the club even on those cold winter days that have nothing to do with sailing.”

Thirty-six year club member Doug Wefer, who was commodore from 2001 to 2003, said that women have played an important role in the club for years. It’s about time it had female leadership, he said, and Maynard’s devotion and energy make her the perfect choice. While some private yacht clubs are set in their ways, he said, Sea Cliff is more open-minded.

“Considering the role that women play in our club, doing everything, [and] all the volunteerism that there is,” Wefer said, “it’s appropriate that women also lead the club, so it’s great to see.”

Maynard, an attorney at Marchese & Maynard, is the village’s associate judge, and served on the village board in 2017 and 2018. “I think the more that you give back and the more that you’re involved in the community, the more fulfilling it is,” she said. “It’s also a good example to set for our children to be active in our community. I try to give back as much as I can.”

Sea Cliff Mayor Edward Lieberman said he has gotten to know Maynard well through her many contributions to the community, and described her as philanthropic and humble, a caring, devoted resident of the village. The yacht club could not have made a better choice for its first female commodore, Lieberman said, noting that her induction punctuated an eventful week in woman’s history, with Sen. Kamala Harris being elected the nation’s first female vice president.

“The year 2020 has now seen a fulfillment of the woman’s movement and the history of women’s suffrage,” Lieberman said, “that in the same week we have a woman vice president of the United States and a woman commodore of the Sea Cliff Yacht Club, both historical and inspiring places of leadership.”