Through the looking glass: Windows at Sea Cliff Firehouse restored to historic glory 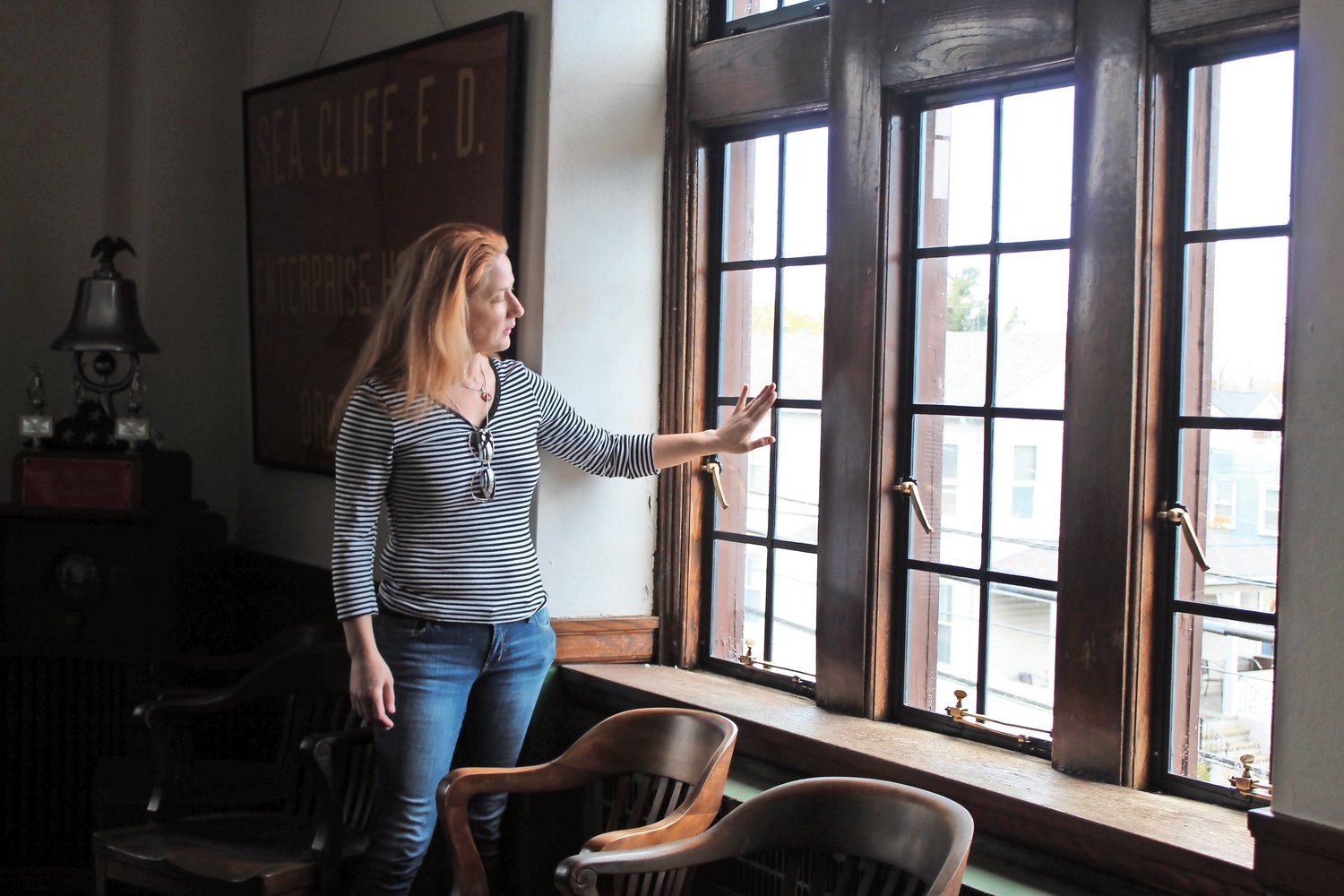 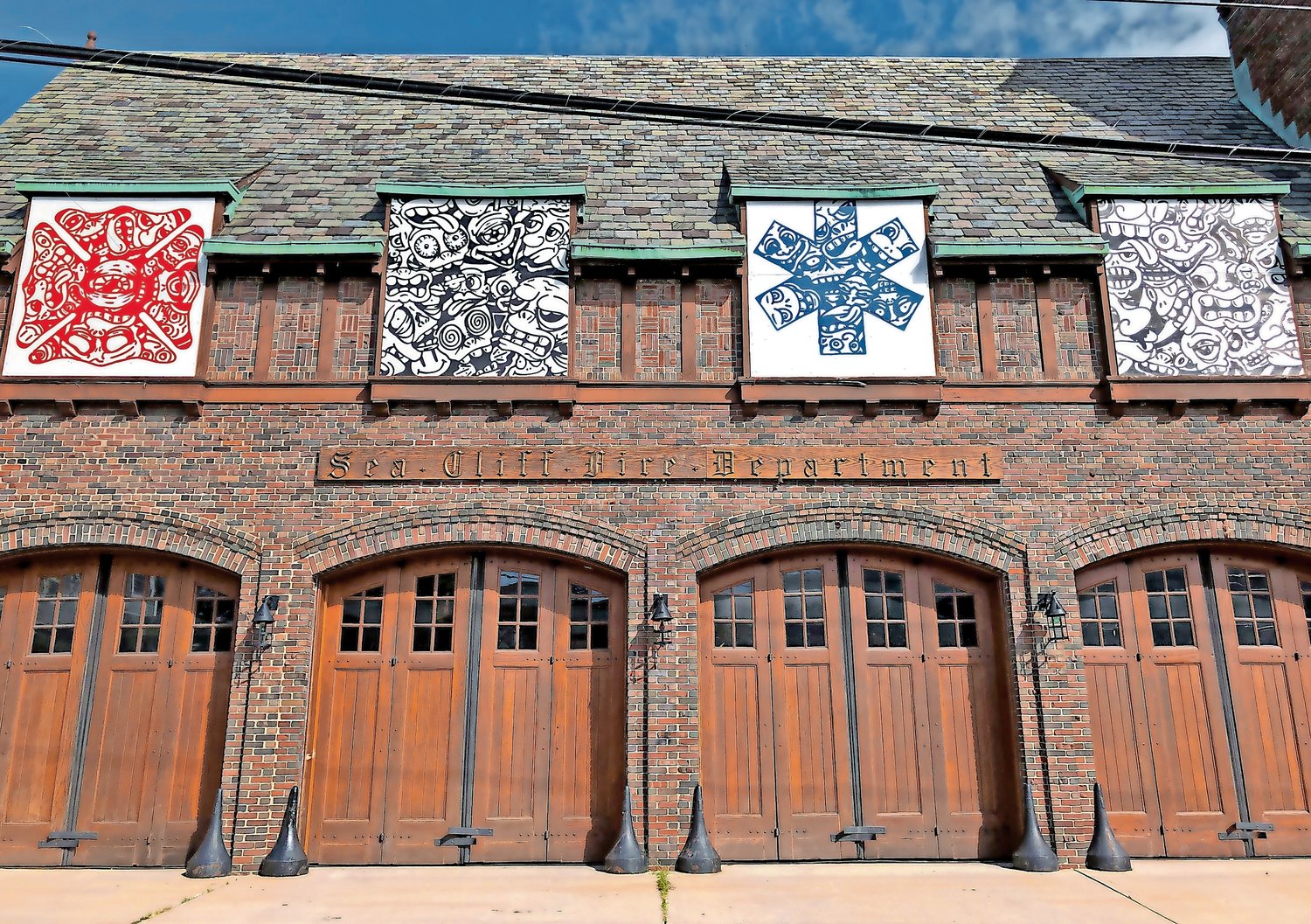 During renovations, the windows of the Sea Cliff Firehouse were replaced by an eye-catching art installation designed by local artist James Roth.
Courtesy Erinn McDonnell
Previous Next
By Alyssa Seidman

Since September, residents have wondered what was behind a series of eye-catching art panels that hung on the façade of the Sea Cliff Firehouse, at 39 Roslyn Ave. What was revealed recently was the result of a restoration project nearly five years in the making.
The steel casement windows of the firehouse, which date back to 1931, were fully restored in a $700,000 effort to preserve the building’s architectural integrity. The Tudor revival-style structure is listed on the national, state and local registries of historic landmarks.
New York state’s Historic Preservation Office determined that the building’s windows needed to be maintained, having been damaged by rust and water over the years. “All the windows were corroded to some degree, and many were either rusted open or shut,” said Erinn McDonnell, the village’s grant writer. “Much of the hardware was damaged in some way as well.”
The village received a $370,000 grant from the state Office of Parks, Recreation and Historic Preservation in December 2017, and put the project out to bid the following month. Contractors from Architectural Preservation Studio, based in Manhattan, worked with McDonnell on the project.
She explained that while the focus of the restoration was the windows, preserving their original design also required masonry work. “The [windows’] sub-frames are set into the masonry, and there had been damage on some of the elevations,” McDonnell said, “so we had to expand the scope of the project to make sure bricks wouldn’t fall out of the building.” The restored windows feature the same brass handle and window stopper hardware of the original windowpanes.


A $125,000 state grant, secured by Assemblyman Charles Lavine, a Democrat from Glen Cove, also funded the restoration. “Landmarks such as the Sea Cliff Firehouse play an important role in the preservation of our communities,” Lavine said in a statement. “In addition to being a historic fixture, the firehouse serves as the home base for approximately 100 volunteer members who donate a great deal of their time to keeping the community safe. These firefighters deserve to have a firehouse that is both stable and secure.”
Other lawmakers have voiced their support for the functions of the firehouse. Last year the village completed an electrical project that replaced old glass fuses with circuit breakers, and added LED lighting throughout the building. The $60,000 for the project was facilitated by former State Sen. Carl Marcellino. Last summer, Nassau County Legislator Delia DeRiggi-Whitton, a Democrat from Glen Cove, secured a $15,000 grant for the department that was used to upgrade its radio equipment.
The windows aren’t the only features that justify the firehouse’s status as a historical landmark. The bay doors of the building, which fire trucks enter and exit, are hand-operated, and McDonnell said she believed they are the last of their kind in the tristate area. The front vestibule of the building still houses a rope lever that is connected to a working bell in the bell tower.
More significant than the physical history of the site are the memories of longtime fire volunteers and residents who recall the firehouse in its formative years. In the 1940s, McDonnell’s great-grandfather Otto E. Kaufmann owned a deli across the street. She said he would leave the store every day at noon to press the whistle button, signaling the time.
“We have generations of members here who remember this building when it was far newer than it is now, so people are happy to see it being taken care of,” McDonnell said. “Most of the other departments in this region have torn down their older buildings; [ours] is unique and personal to this area. There’s a solid sense of tradition.”
Sea Cliff Fire Chief Mark Vitale said, “The department is glad that we were able to keep the original, historical look of the building that is a pillar of the community and of the village.”
McDonnell added that efforts to restore the building’s woodwork and slate roof were in the works, and the firehouse could be completely restored within the next five years.