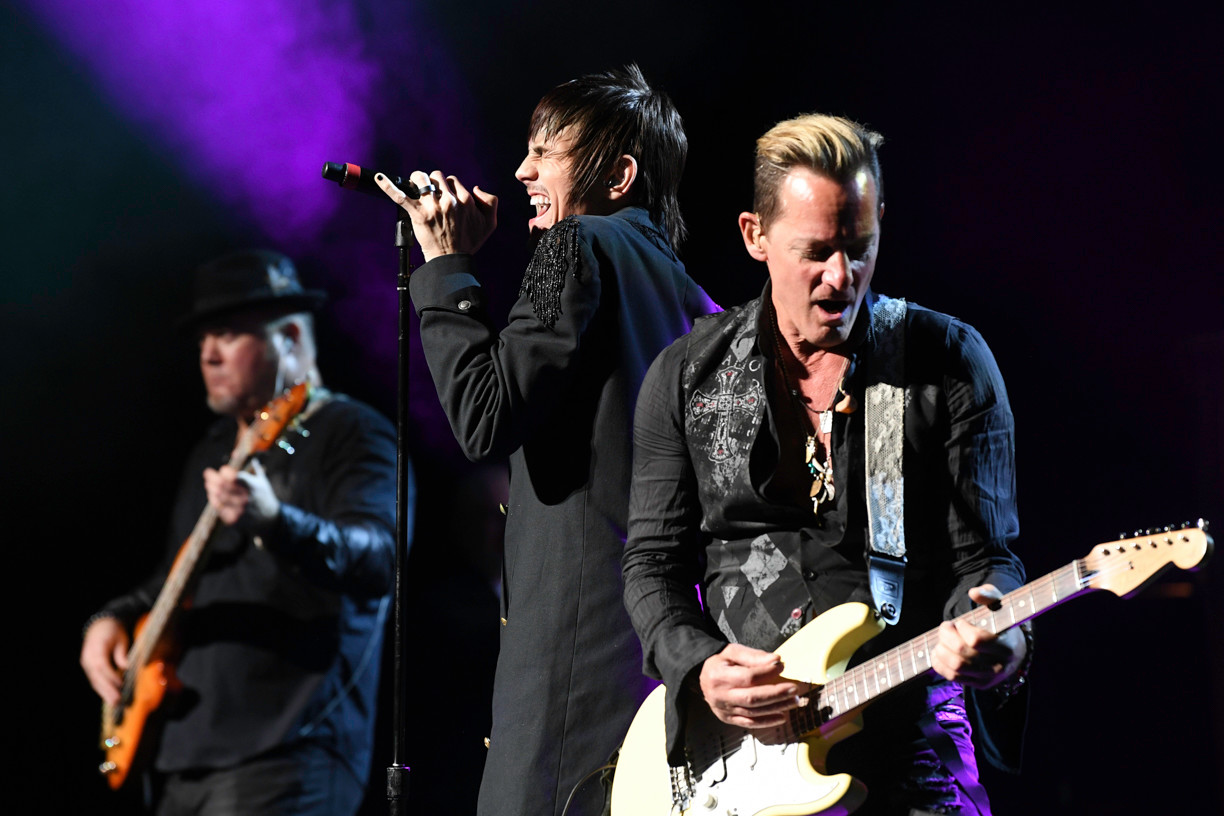 Being in the right place at the right time is much of what makes a career; for Tony Bruno, it was his talent, hard work, and passion for rock — coupled with being at Island Park hot spot Speaks at a moment when Twisted Sister needed an opening band.
What began as a summer of what the Swift Kick guitarist can only describe as amazingly debaucherous, soon became a game-changer for the producer, writer and music director for artists such as Enrique Iglesias and Rihanna. As Bruno prepares to head to Broadway as the lead guitarist in “Rocktopia,” he recalled how the 1980s Long Island club scene was formative and inspiring.
The stories from Speaks and other clubs, such as Mad Hatter, Hammerheads and OBI, could keep the Farmingdale native reminiscing for days; in fact, he provided “jaw-dropping” entertainment for Rihanna at her birthday celebration in 2010 when, across the table from the singer, he lost himself waxing poetic with Twisted Sister’s Jay Jay French.
“I ran into him, we were catching up, talking about Long Island and all the things that we were able to do that you can never do anymore, a lot of them a little risqué, involving groupies and all that stuff,” he recalls. “All of a sudden we realized that everyone in Rihanna’s crew were dead silent, staring at us, just listening in. Rihanna said, ‘This really happened?’ We couldn’t stop laughing. It was a weird, different time. I was a kid and I shouldn’t have even been in a bar, and I’m opening up for Twisted Sister.”
Bruno remembers first meeting French and Twisted Sister after they had caught Swift Kick at Speaks. “Dee [Snider] was having vocal problems, and Twisted Sister needed a band to open for them every single night because they could only do one set,” he recalls. “Because my band did all this weird stuff, like Alice Cooper, The Tubes, the stranger Bowie songs, and all the music no one else did, Twisted Sister loved it. They were like, ‘Oh my god, you guys played every single song in our record collections! You guys want to open for us the entire summer? We need help!’ It catapulted us to this position where all of a sudden we could fill these clubs.”


“It was super cool to be in a band then because you could have a legitimate business,” Bruno says, of the lifelong lessons he learned. “We had a truck, we had a road crew, people on salary; we actually had a business of being in a band, which is really fun. It was a special time, and Long Island is definitely unique. Being a part of that Long Island club scene was something else.”
Bruno is excited about sharing his talent on Broadway. Not only does he perform in “Rocktopia,” but he is also the musical director and has written two numbers (about which he cannot reveal any spoilers).
“The best way to describe ‘Rocktopia’ is to say that if you were living back when Bach, Rachmaninoff, and Beethoven and Mozart were living, they would have been your Jimmy Page, Rolling Stones, Steven Tyler…they wrote music, they partied, they slept with women. It was the same exact life, but that type of rock music was how they expressed themselves,” he says.
“With Rocktopia we found a way to match some of those songs with classic rock songs that are in the same genre in terms of feeling and what the message is, and created sort of a mashup with orchestrations. The idea is to really expose just how similar these songs are and just how well they work together.”
“Those people were every bit the same as Pink Floyd were in their heyday. You don’t even see it happening — all of a sudden you’re in a classical piece.”
“It really brings music to another level instead of just listening to a song and having something visual, or having some dialogue to make it into a Broadway show; it’s more about how the music is the dialogue and you can really get it,” he says.
“Rocktopia” is actually Bruno’s second foray onto the Great White Way; he was previously a sub-guitar player for “Rock of Ages,” which coincidentally overlapped with Dee Snider’s run in the musical.
“The Broadway mentality was against things like rock shows for the longest time,” he says about the advent of more rock infused productions, such as “American Idiot,” “Rock of Ages,” and even “Springsteen on Broadway.”
“’Rock of Ages’ broke the doors down a little bit. More than anything, people wanted that to fail. It was supposed to run six weeks, and it ran for four-and-a-half years.”
Following “Rocktopia,” Bruno won’t have time to visit Broadway for awhile, as he recently signed on as Zayn Malik’s music director. Nonetheless, he looks forward to experiencing more rock on the New York stage.
“If it’s done right, there’s plenty of room for rock. There are many people who want to go to a Broadway show and don’t want to sit through Andrew Lloyd Webber. I’m one of them. Hopefully, Broadway will continue to change that way.”
Visit www.rocktopia.com for more information and to purchase tickets.