A dentist comes home to Merrick 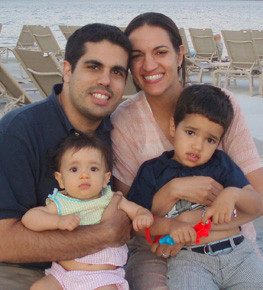 Dr. Rania Elbaz spent many years of her childhood moving around. Born in Egypt, her family moved to Nigeria, back to Egypt, and then to Canada, because of job opportunities that arose for her father.

In 1994, Elbaz settled in Merrick with her family, including her father, Youssef, mother, Zeinab, sister, Noha, and brother, Adam.

“I’ve lived in all these different places, but in the end, this feels the most like home,” said Elbaz, 33, who now lives in North Merrick with her husband, Zachary, a neonatologist, son, Amir, 3, a student at Twin Oaks Country Day School in Freeport, and daughter, Noora, who is 11 months old.

Elbaz, a Calhoun graduate, has practiced pediatric dentistry as an associate at Long Island offices. In early November, she will bring her practice home to Merrick.

“Merrick is such a fantastic place to be,” she said. “The school districts are great. It’s nice because you have really good opportunities here. It’s a nice place to raise a family.”

Shortly after, Elbaz shadowed Bellmore dentist Laurie Litwin, who advised her to go into dentistry. “That’s what ultimately pushed me in that direction,” she said.

In 2006, Elbaz graduated from the Columbia University College of Dental Medicine, one of the country’s top dental programs. Elbaz said she never doubted that she wanted to become a pediatric dentist. “I’ve always been very good with kids,” she said. “They’re just so innocent and joyful. It’s very rewarding.”

Elbaz, who sees patients as young as 1 year old, said she is aware of the fear that children associate with going to the dentist, but she said she hopes to change that perception. “We want to get them to the point where they look forward to coming and they’re excited to be there,” she said.