A passionate educator is the new principal 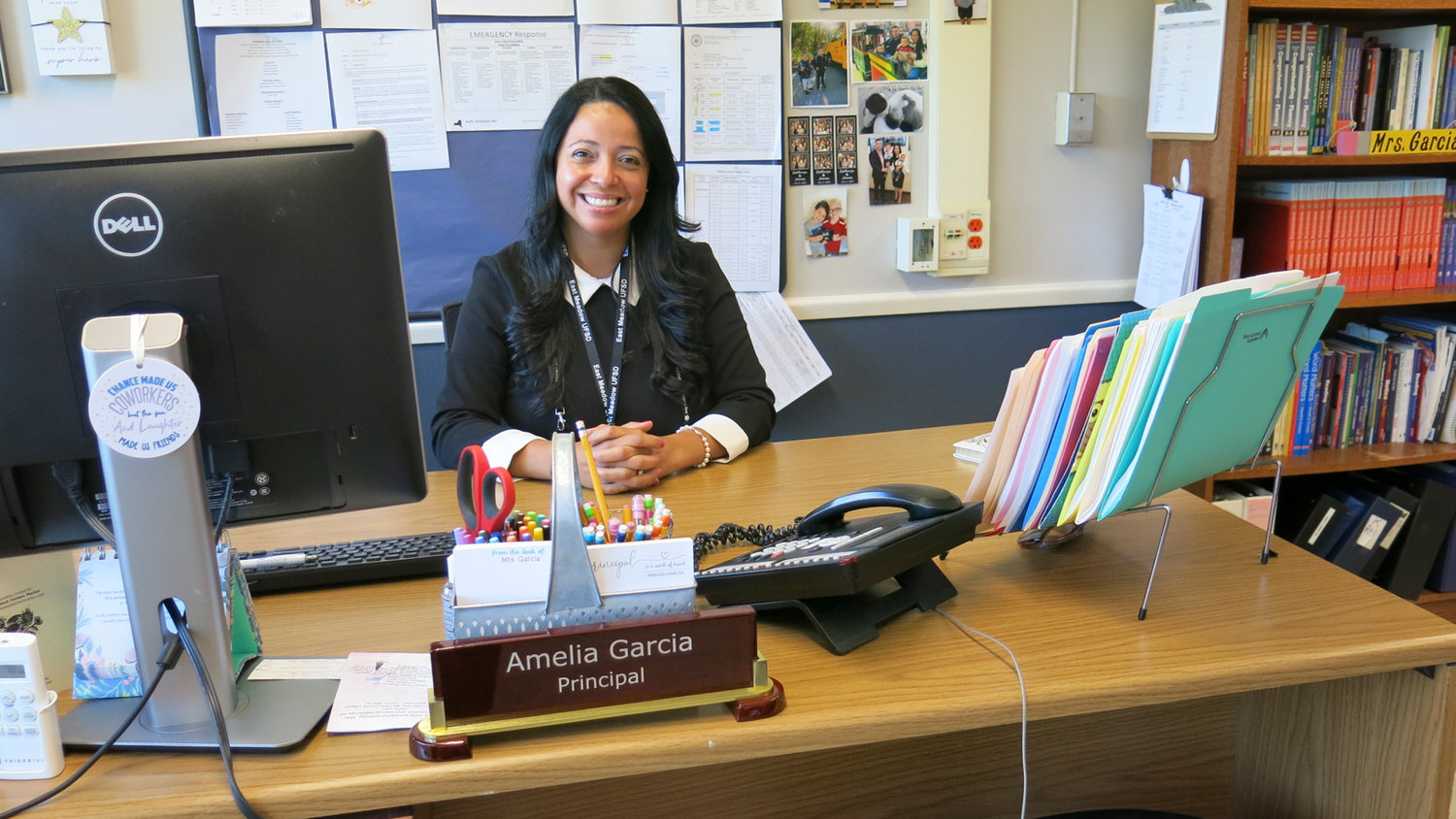 Amelia Garcia, Parkway Elementary’s new principal, has a goal: to learn all the children’s names and to get to know each of them.
Laura Lane/Herald

Even when they’re wearing masks, you can see that the children are smiling when Ms. Garcia is around.”
Annamaria Izzo-Barbieri, Parkway Elementary teacher
By Laura Lane

Parkway Elementary School’s new principal, Amelia Garcia, may be unfamiliar to students, but she has been working for the East Meadow School District for nine years. Beginning as an assistant principal at Barnum Woods Elementary School in 2012, she was hired for the same position at Bowling Green Elementary two years later, before coming to Parkway in July.

Her work at both schools helped Garcia prepare for her current position, she said. Perhaps her favorite part of the job is visiting classrooms, which Garcia said she has always enjoyed, first as an assistant principal and now as principal.

“To sit back and see the magic of the classroom, to see it unfolding, is so wonderful,” said Garcia, in her office where there are signs conveying affirmations like: Be creative, thankful, kind, bold. Be you. “You see that little light bulb go off when they are thinking, ‘Wow! I didn’t think of that!’ It’s all pretty powerful.”

Garcia, 43, is originally from the Bronx. She moved to Long Island when she married her husband, Michael, in 2013.

Her career in education started in 2004 when she was hired as a substitute teacher and then a few months later as a fifth-grade teacher at P.S. 54 in the Bronx. After working at C.S. 102 as a math teacher and then as an interim acting assistant principal, she accepted a position as an assistant principal at M.S. 22, also in the Bronx. A year later, she began working in the East Meadow School District.

A love of education came early for Garcia, who as a child played school with her cousins. But she didn’t pursue it for years. As an undergraduate, she was a criminal justice major at Long Island University, graduating in 2000. Then she earned a master’s in corporate communications and public relations at Iona College in 2003.

A resident assistant in the dorms at Iona, she was promoted to assistant director of residential life. Garcia knew she would soon be the director, an administrative job that she didn’t want to do anymore.

That’s when she decided to go into education. Garcia graduated with a master’s in elementary education from Mercy College in 2006.

“Working with little ones is like no other job,” she said. “You see such growth with children. I wish I could explain the feeling. It’s like no other.”

“She’s my dream team,” Farinella said. “Amelia is a breath of fresh air who has beautiful interpersonal skills. She brightens up any room.”

Garcia used some of these skills during the height of the coronavirus pandemic while at Bowling Green. Some of her responsibilities were administrative, including maintaining a building-level Covid-19 contact-tracing spreadsheet and developing a schedule for playground rotation to keep everyone safe. But she also made several calls to parents to comfort them.

When told of Garcia’s commitment to reaching out to parents, Farinella said she wasn’t surprised. “When someone truly loves what they do, it comes out in all ways,” Farinella explained. “Amelia paves a path for love, caring and devotion, and her utmost attention is to children, teachers and the community.”

Garcia’s goal is to learn every child’s name in the school and then to get to know them all, she said. Her role model was her own sixth-grade math teacher, Ms. Mecca. She genuinely cared, Garcia said, and knew more about each child than their names. Math was her favorite subject, but Mecca made Garcia love it even more. And Mecca made everyone feel special, Garcia said. That’s what she wants to do. She is committed to “trusting my gut” as she moves forward.

Parkway fifth-grade teacher Annamaria Izzo-Barbieri said she and her students are happy Garcia was hired. “She always listens to the kids,” Izzo-Barbieri said. “Even when they are wearing masks, you can see that the children are smiling when Ms. Garcia is around. She has a positive energy, warmth and caring. I just can’t say enough about her.”