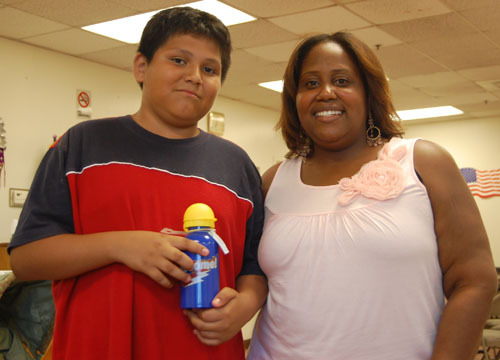 A local kid will spend his summer mornings playing games, running in the sprinklers and making new friends thanks to a local non-profit agency. The Yva Jourdan Foundation, run by Valley Stream resident Marsha Guerrier, is sponsoring a child for the village’s summer camp at Barrett Park.

Guerrier explained that in the past, her foundation has made a donation to Urban Dove, a program for at-risk youths. However, she said, she wanted to see first-hand a child benefit from the donation and chose the Barrett summer camp. “With this,” she said, “I really thought it would be great to meet a family that needed this and deserved this.”

On June 21, Guerrier met 10-year-old Christopher, who will be a fifth-grader at Shaw Avenue School next year, along with his mother Christine. Together, they filled out the paperwork to sign Christopher up for camp, which began Wednesday.

Christopher said this is his first time going to summer camp. He said he loves to play outside, especially basketball. “I just like doing activities,” he said.

At Barrett Park, Christopher will have a chance to meet children from other areas of Valley Stream. His mother said that should be one of the best parts of his experience at camp, and when he goes to junior high in a few years he will already have some friends from other schools.

Christopher said this is the second time he has been picked for something special. He once won a PTA award for a story he wrote. He likes to write and said he will probably write a story about his summer camp experience when it is over. Christopher also enjoys playing the drums and the flute.

Guerrier said she sought a child to sponsor through the Peninsula Counseling Center to ensure that they were helping someone with a need. She said she learned about the camp program from the Valley Stream Republican Club’s community night at the American Legion earlier this year.

The Yva Jourdan foundation was able to do this, she said, because of the price of the Barrett Park program. It costs $180 per child for six of camp, three hours a day, five days a week. “It’s extremely affordable for the residents,” she said. “It’s in the community and it’s for the community.”

Guerrier presented Christopher with a bag of goodies for summer camp including a bathing suit, T-shirt, beach towel, flip-flops, a water bottle and sun block. Christopher said he likes the water bottle the best because it says “Awesome” on it.

Christine said she was very grateful for the camp sponsorship, and noted her son will probably head from Barrett Park to the village pool for the afternoons because he loves to swim.

Guerrier said she plans to make the camp sponsorship and annual tradition for the Yva Jourdan foundation. Even before Christopher’s first day at Barrett Park, she predicted a great experience. “He’s going to have a fabulous time,” she said.
Report an inappropriate comment