A vertical milestone on the Superblock 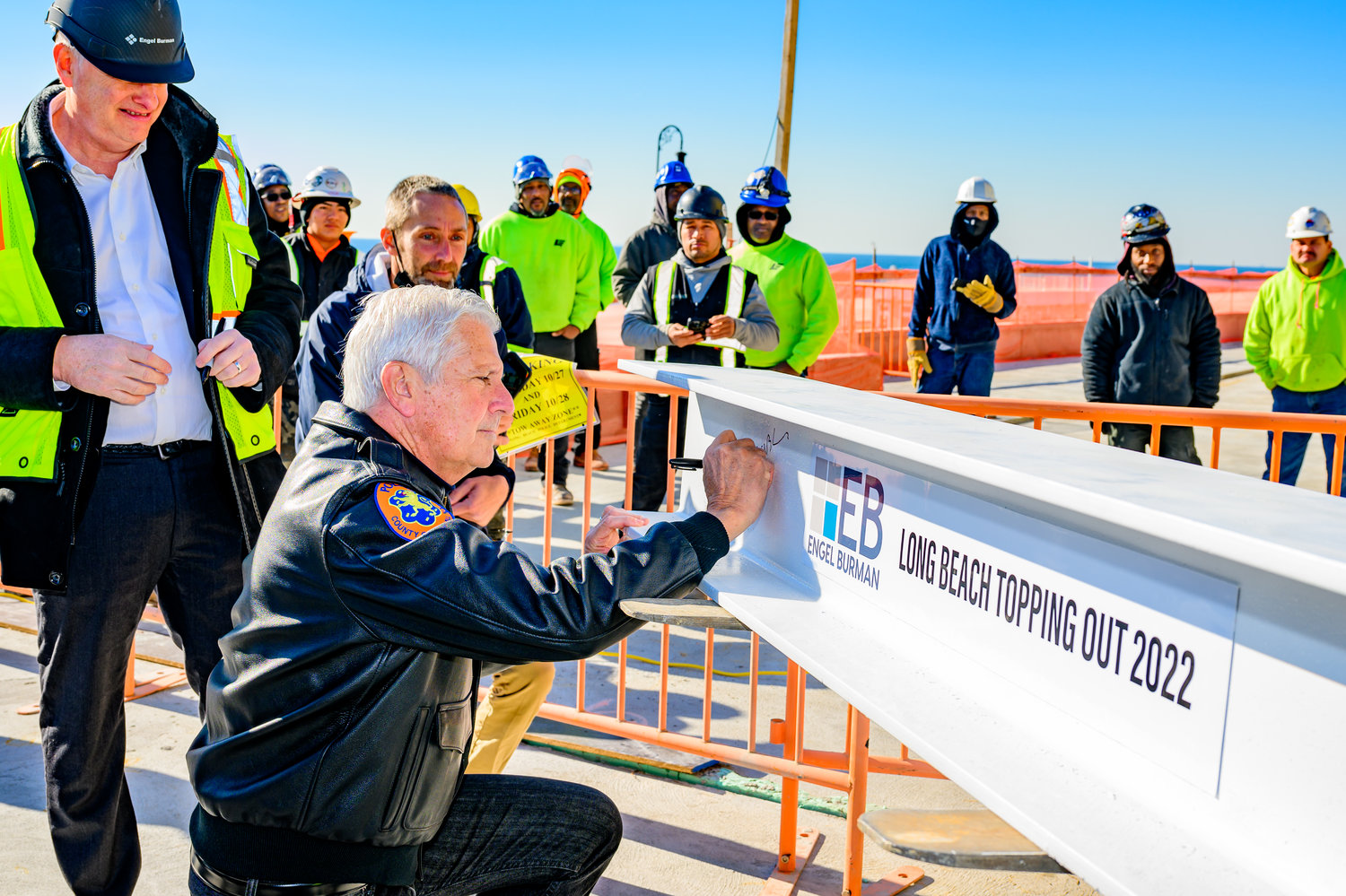 Nassau County Executive Bruce Blakeman wrote his name on a steel beam that was hoisted to the top of one of the three residential buildings under construction on the Superblock.
Bob Arkow/Herald
By James Bernstein

The City of Long Beach and the Garden City-based developer of the Superblock held a topping-out ceremony Tuesday morning to mark the completion of a significant phase of the construction of luxury residential units that have been the source of controversy on the barrier island for 40 years.

An American flag was placed atop the skeleton of one of the three luxury residential buildings on the site known as the Superblock. Much of the past four decades have featured lawsuits, negotiations and meetings among more than one developer, sometimes hostile residents and city officials.

The placement of the flag by Nassau County Executive Bruce Blakeman and Steve Krieger, a principal at the developer, the Garden City-based Engel Burman, was purely symbolic. Blakeman, Krieger and other officials signed their names on a steel beam that was also placed atop the building.

But for those who have worked on the project for the past year — ground was broken only in September 2021 — the day held a lot of meaning. “It means that the structure is in place,” said Kelly Gardner, an assistant project manager at Engel Burman.

After just a year, large sections of the buildings have been completed. There is still much work to be done, but Engel Burman executives say they plan to begin selling condominiums and renting apartments by the summer of 2024.

The rapid rise of the buildings has taken many in Long Beach by surprise. The development will include 238 rental apartments in a 10-story building called the Breeze. There will be 200 condos in two nine-story buildings called Isla Blu, and about 6,500 square feet of retail space — including restaurants — along the boardwalk. The buildings sit on six acres between Riverside and Long Beach boulevards and Broadway, yards from the Atlantic Ocean.

Before he stepped into an elevator and took the American flag to the top floor, Blakeman addressed a crowd that included many construction workers.

“This is what Nassau County is about,” he said. “Build, baby, build. We’re going to open up Nassau County.” Blakeman said he hoped to lure more companies and developers to the county.

“This is a very meaningful moment for me,” he said later as he stood on the boardwalk near Long Beach Boulevard.  “My grandfather lived right down the block. He used to take us to the beach. Years later, there was a question: What is going to happen to the Superblock? Now we know.”

For decades, the site stood vacant, and the area became an eyesore for Long Beach. A number of residents said they feared the impact that a huge residential complex would have on city services and the Long Beach School District. Progress was also stalled by a lawsuit by a former developer, who had sued the city for over $100 million.

In August 2021, the Long Beach City Council settled the suit, ending a decades-long stalemate. The former developer, iStar, and the city transferred a $2.5 million credit — money iStar had spent on building fees — to Engel Burman.

Richard Kessel, chairman of the IDA, told the crowd at the topping-out ceremony that the project was “an extraordinary example of government and the private sector working together.” Many county officials, Kessel said, doubted that Engel Burman’s project cold be completed, given its size.

“But it has been done,” Kessel said. “This is going to be a shot in the arm for Long Beach. This is a home run.”

“Today was an important milestone towards the completion of this project,” Long Beach City Councilman John Bendo said in a statement. “Soon our new neighbors will learn what a great place Long Beach is to live, work, and play. Where else can you go from your computer to a surfboard in a matter of minutes? The new retail space this project will add to the boardwalk will greatly enhance the resident and visitor experience alike. The new tax revenue generated will expand the tax base, helping to ease the burden on our existing residents.”

Estimates are that Long Beach will net $32 million in revenue, after expenses, during the 25-year payment-in-lieu-of-taxes period. The city school district is expected to collect more than $75 million during that period, and Nassau County, more than $13 million.