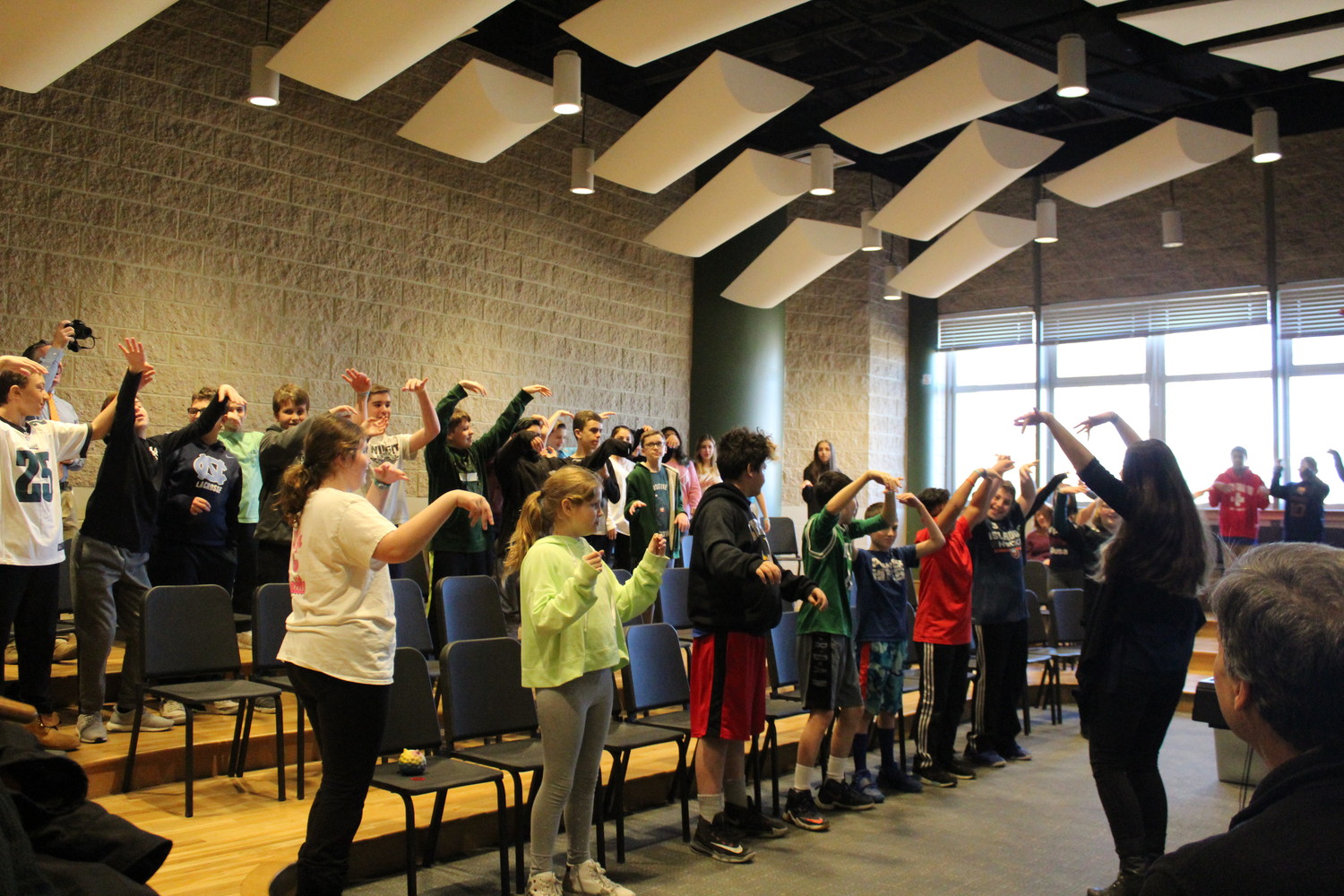 As part of “Wonder Day” at Lynbrook North Middle School, students danced to see how someone with disabilities might not be able to perform similar movements.
Melissa Koenig/Herald 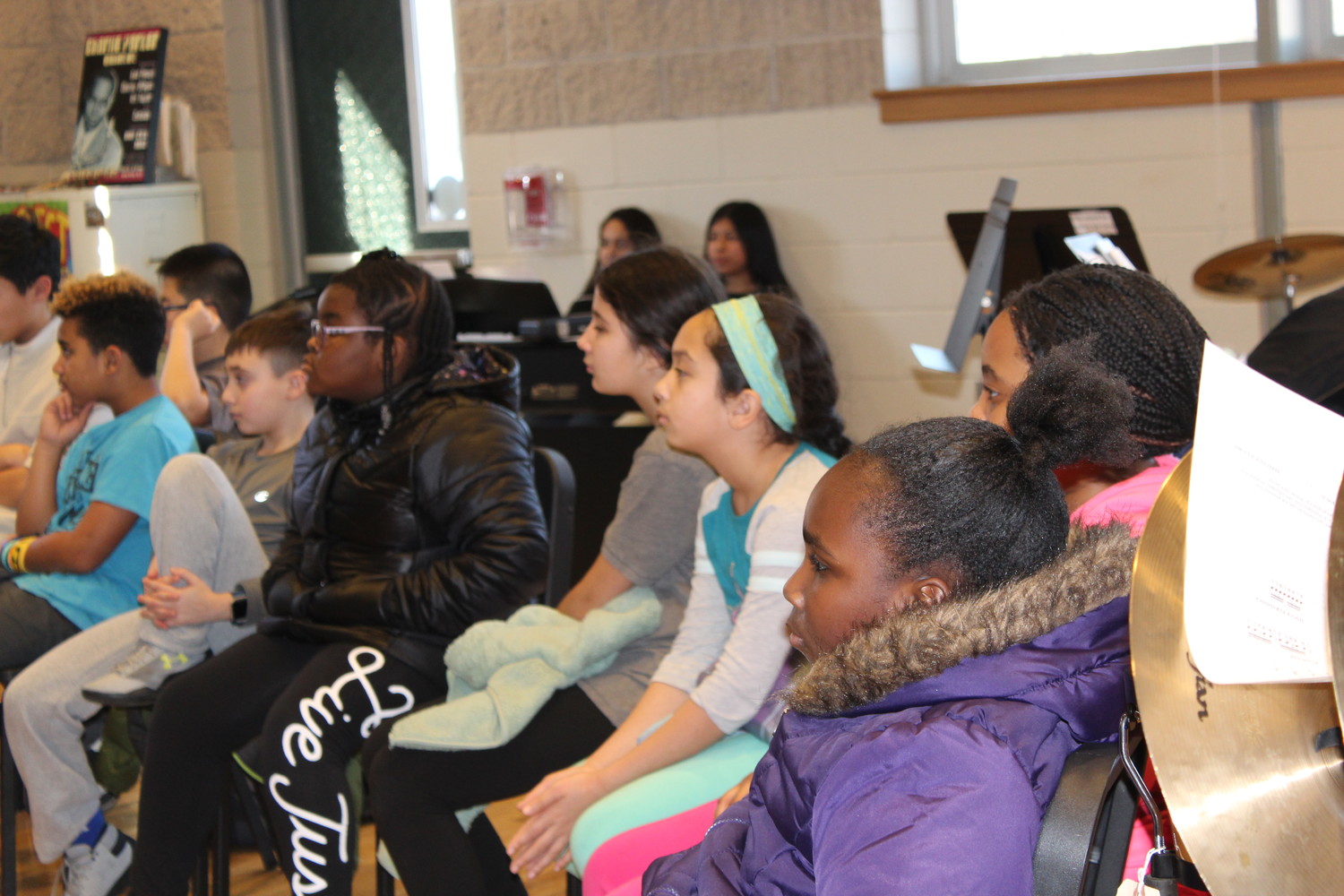 Nine students from the No Place for Hate Committee at West End Elementary School attended a discussion.
Melissa Koenig/Herald
Previous Next
By Melissa Koenig

After reading the book “Wonder,” which details the life of a boy with a facial deformity, and watching the film of the same name, students at Lynbrook North Middle School broke out into a variety of sessions to better understand living with a disability on Feb. 5.

“Wonder” chronicles the story of August “Auggie” Pullman, a boy with facial differences who enters the fifth grade, attending a public elementary school for the first time. Pullman suffers from facial issues similar to Treacher Collins syndrome, which is a genetic disorder characterized by deformities of the ears, eyes, cheekbones, and chin, and varies in severity from case to case.

Jim O’Hara, a social studies teacher at North, said he co-organized a busy afternoon of activities with Principal Sean Fallon to teach students “to appreciate our differences and to understand that it’s kind of the common goal that we’re all here to learn.”

To learn more about disabilities, every student in the school had to choose two sessions to attend out of a list of 10 activities. They included yoga and presentations from non-profit organizations such as myFace, a support group and care center for those with facial disabilities, and Daniel’s Music Foundation, which provides programs for children and adults with disabilities.

In the band room, middle school students and nine fifth-graders from West End Elementary School’s No Place for Hate Committee listened to Dina Zuckerberg and Vera Eastman speak about myFace. MyFace is a non-profit organization based in Manhattan that provides personal care and support for people with facial deformities at the myFace Center and at New York University Langone Medical Center. They also provide housing for patients and family members undergoing surgery.

At the middle school, Dina Zuckerberg, the director of family programs for the organization, spoke about Nathaniel Newman, whose picture was plastered throughout the set of “Wonder.” Before starting his new school, Newman wrote a letter to all of his classmates detailing his facial deformity and explaining that he enjoys many of the same activities that other children his age do.

“That’s the kind of message that we’re trying to show, that children are children,” said Eastman, the community relations manager for myFace.

Down the hall, students danced to experience how someone with a disability might not be able to move in the same way as someone without a physical limitation. The students then learned about Daniel’s Music Foundation.

At age 12, Daniel Trush had an aneurysm and fell into a coma. When he woke up almost a year later, he was wheelchair bound. Eventually, Daniel was able to walk again, but he still has a limp.

During his recovery, his parents discovered that music helped Daniel heal, from the songs that were playing when he was in a coma, to the keyboard playing that helped him regain his motor skills. But Daniel wanted to enjoy music with other people who have disabilities, so he and his father, Ken Trush, founded Daniel’s Music Foundation and set up a music center in Harlem.

The presentation included videos detailing the work that the foundation does, and ended with Daniel singing an original song entitled “All I Need is You.”

Daniel said he hoped the students “learn the ability in disability.”

“Everybody would like to have a meaningful life, everyone strives for that,” Ken added. “And if everyone can understand differences, maybe that would lead to respect and make the world a better place.”