Sabrina Guo is Oyster Bay's Person of the Year 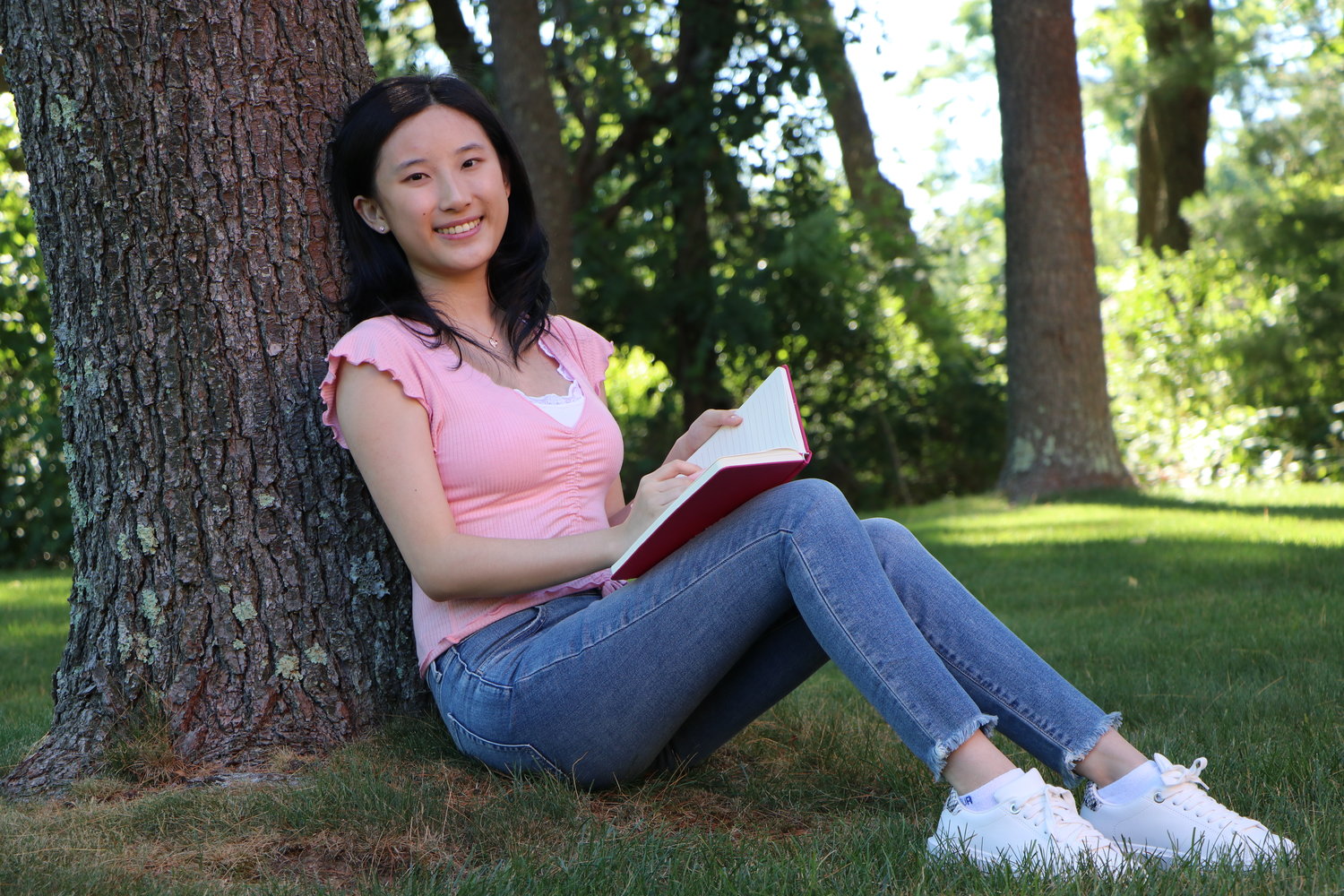 She’s amazing to me, and not just for what she’s done, but the heart she has.”
Robin Wheat, Legislative assistant to Kevan Abrahams
65 Cybele, By Sabrina Guo

and hear my truth,

I was born in Queens,

of which I remember little

except for smoke unfurling

before my family moved

which is hardly an island

at all. It’s not tropical

for one thing, and you don’t need

a boat or a plane

to get there. In Oyster Bay,

it snows in the winter,

The blades of my skates

cut into the ice

but they don’t break the surface

as the frozen asteroid

years ago, breaking off

a chunk of rock

that then became the moon.

In concert with the sun,

over the earth, melted

the ice that remained

into bodies of water.

But where did the asteroid’s ice

come from in the first place?

I can’t help but ask

when I feel the blades

of my skates tracing lines,

all stories must start

water is made of molecules

are made of atoms

and atoms are made

that need each other

Sabrina Guo has so many accomplishments, it’s hard to know where to start. The 16-year-old Oyster Bay Cove resident, a junior at Syosset  High School, has received awards for student journalism, her poetry and her skill as a violinist.

Her social activism is equally impressive. In 2018 she founded Girl Pride International, a global nonprofit girls’ empowerment organization. Then, in 2020, she launched Long Island Laboring Against Covid-19. The pandemic relief organization, which is under an offshoot of Girl Pride, initially raised funds to buy personal protection equipment for medical professionals, first responders and other frontline workers. LILAC went on to help school districts and communities that also needed PPE, which it has continued to do.

In July, President Biden sent Guo a letter of thanks for her efforts with LILAC, and included a Presidential Gold Volunteer Service Award.

Guo works tirelessly to help people in her community and around the world, making her a perfect choice for the Herald’s 2021 Person of the Year.

This was a busy year for her. She was profiled on Disney’s YouTube channel for its social initiative, “Use Your Voice,” in May. Her public service announcement aired on the Disney Channel, Disney+, Disney Junior and Disney’s other platforms. In it, she tells viewers that she uses her voice to uplift her community.

“A lot of younger kids can see the video,” she said, “and I hope they know that no matter your age, you can make an impact, small or big, with actions in your community.”

Also in May, Guo helped organize a student-led rally at the Syosset Long Island Rail Road station, highlighting the increase in attacks on Asian Americans. She experienced racism in elementary school, she said, being excluded from activities by cliques because of her race.

Hearing about Guo’s leadership at the rally, the Long Island Chinese American Association invited her to speak at its October meeting, along with U.S. Sen. Chuck Schumer. There the two discussed ways that community leaders could work with Schumer to combat hate crimes, bigotry and violence, particularly against the Asian American Pacific Islander community.

Guo also shared one of her own experiences with Schumer. “I was flipped off and verbally assaulted by a couple while I was in the middle of an interview with a news station,” she said. “It shook me to my core.”

Schumer told her it was important to speak out. “If you stay silent, it will grow,” he warned. “The demons have been let out, and we have to push them back in.”

Guo impressed upon Schumer the importance of integrating Asian American and other minority groups’ histories into school curricula across the country. She asked him to pass legislation to ensure it, she said, and he pledged to do so. “One thing that is unique is for him to hear the voices of youth, and for us to inform him how important this issue is to us,” she said.

Selected as the youngest global winner in the 2021 Poems to Solve the Climate Crisis Challenge in October, Guo represented the U.S. at the United Nations Climate Change Conference, known as COP26, in Glasgow in November, which included more than 100 world leaders and 30,000 delegates. She highlighted climate injustice by reading her award-winning poem, “65 Cybele,” virtually [see box]. The event was livestreamed worldwide.

“It was such an exhilarating and enriching experience to speak out at such an enormously powerful platform like the U.N.,” Guo recalled. “My poem was a tribute to our sanitation workers and custodians, who received little to no recognition throughout the pandemic.”

Her generation, she added, is inheriting a damaged planet. “We have to do everything we can to help,” she said. “I was extremely proud to represent Oyster Bay and New York, and am just constantly inspired by all those who tirelessly worked to keep our neighborhood clean, beautiful and green.”

Although Guo’s activism began in 2018, she was known for helping others as far back as fourth grade. When Tina Tang arrived from China, she spoke no English. She and Sabrina were in the same class at Berry Hill Elementary.

“Sabrina was my first friend here, the first one to talk to me,” said Tang, 16, now a junior at Friends Academy. “She even translated for me. Sabrina is smart, but not just book-smart. She can always see the needs of the community, and finds ways to help them.”

Tang, the co-assistant director of fundraising for Girl Pride, described Guo as an effective leader, someone who can speak to elected leaders without fear. “I see her interactions with other adults and leaders,” Tang said, “and see her as one of them.”

It was Michelle Obama’s “Let Girls Learn” initiative that inspired Guo to create Girl Pride. While a student at South Woods Middle School in October 2018, she wrote a letter to Obama telling her that she was inspired by the former first lady’s initiative, and was surprised when she received a call from Obama’s office. She was invited to Obama’s “Becoming” book tour stop at Barclays Center.

“From then on, my desire was to uplift the marginalized girls, and to provide more platforms for their voices so they can be heard,” Guo said.

She founded Crossing Borders in the winter of 2018, with the approval and support of the Syosset Central School District. As Girl Pride’s first initiative, with the help of a group of Syrian female artists known as Another King of Girl Collective, Crossing Borders created an exchange of 40 international pen-pal letters connecting American students with Syrian refugee girls living in the Za’atari refugee camp in Jordan. Crossing Borders now has more than 100 letter-writing members worldwide.

Dr. Thomas Rogers, superintendent of the Syosset School District, said he recognized Guo as a young leader when she was in middle school.

“I have over 6,700 students, and it’s hard to get to know any of them, but I know Sabrina,” Rogers said. “Our young people believe they can change the world for the better, but Sabrina is extraordinary. She has invested herself fully in her philanthropical activism.”

Perhaps what is most striking about Guo, those who know her say is her generosity of spirit. The suffering and loss brought on by the coronavirus pandemic led her, she said, to make a decision in 2020, prior to establishing Long Island Laboring Against Covid-19, that even her parents, Spencer and Eva Guo, did not initially understand.

Their daughter, who was 14 at the time, said she wanted to use her $40,000 of college savings, and $1,000 of personal savings, to buy PPE for medical and non-medical front-line workers. “We had lost half of our savings and retirement money due to the stock market crash in the middle of the pandemic,” said Spencer, 49, a semi-retired educational consultant. “But we said yes, after Sabrina asked us how we paid for college.”

Children of immigrants from China, Sabrina’s parents worked to fund their college education. “Sabrina said to me, ‘If you could pay for college, so can I,’” Spencer recounted.

She formed LILAC on March 23, 2020, and began fundraising, with her own money included in the GoFundMe donation site she set up. “Money you can earn back,” she explained, “but lives you cannot.”

That May, at the height of the pandemic, LILAC focused its efforts on Freeport, Baldwin and Hempstead because they were the hardest-hit communities in Nassau County, Guo said.

Partnering with the office of Kevan Abrahams, the County Legislature’s minority leader, LILAC continued its efforts in 2021, with more than 15 events, donating 10,000 masks to the Freeport School District, and school supplies as well as cash to the district’s back-to-school giveaway. LILAC has pledged to continue contributing for the next two years.

Robin Wheat, Abrahams’s legislative assistant, put Guo in touch with the Freeport district, and helped her connect with other community organizations that were suffering. “She’s amazing to me, and not just for what she’s done, but the heart she has,” Wheat said. “She’s one of those people that will get it done no matter what.”

Abrahams said he has seen many people offer help during the pandemic, but Guo is different. “Others are doing good things, too, but not to this magnitude,” he said. “She stands out because she is able to do so much at such a young age, and is able to network with people from all walks of life.”