Art gets serious at Arts in Plaza

Janelle DeSouza is among full-time artists on display 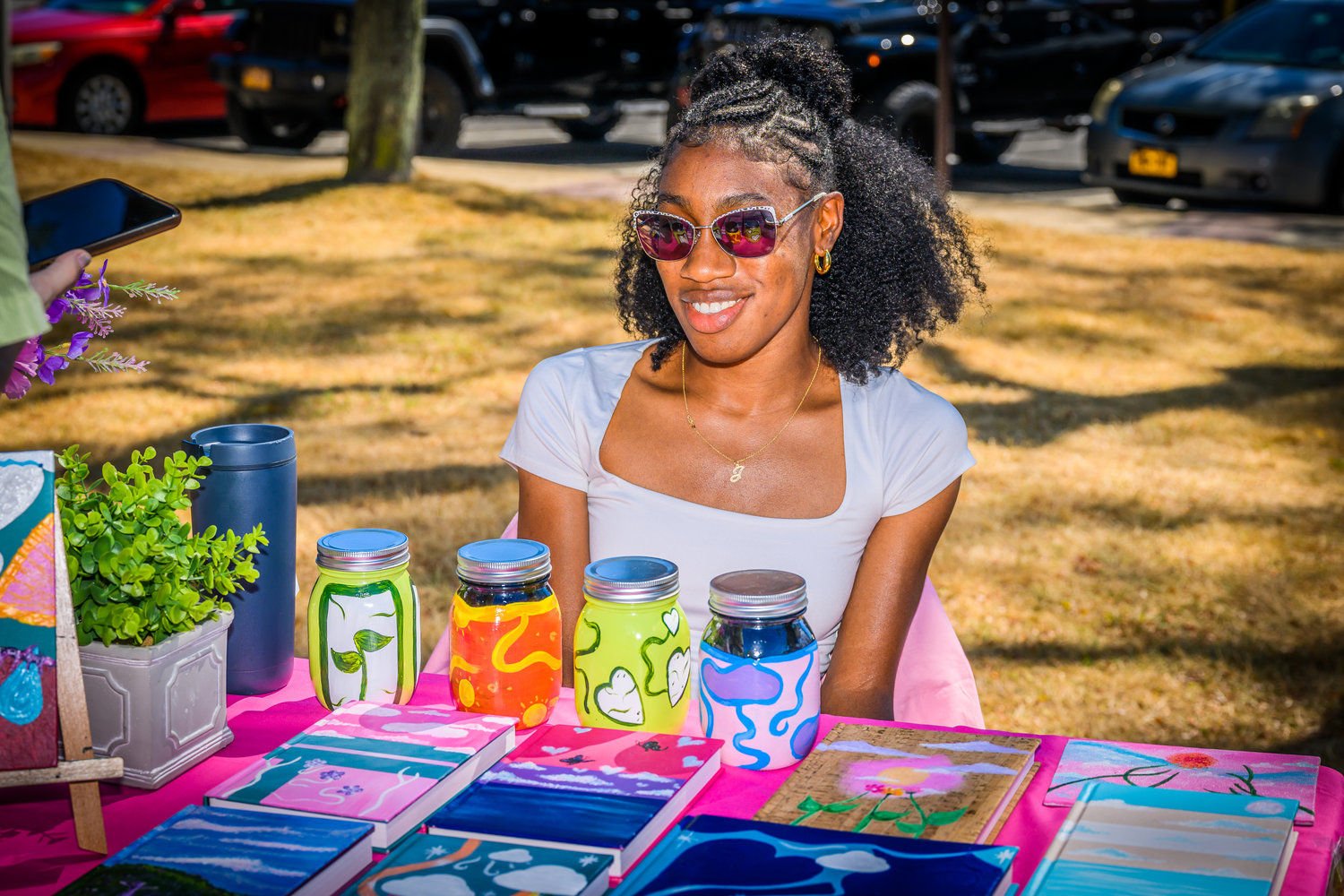 Janelle DeSouza, 26, was among about 15 artists who displayed their work at Arts in the Plaza last Saturday morning. DeSouza is a self-described expressionist.
Bob Arkow/Herald
By Lilly Mullaney

Many artists come to Arts in the Plaza, in Kennedy Plaza outside City Hall, on weekends during the summer. Some are there to enjoy a nice day outdoors and to display their work. Janelle DeSouza, of Uniondale, is different.

DeSouza, 26, is serious about her art. It’s what she wants to do. “When I create, I create from the heart, so I would describe my style as expressionist,” she said with a smile as she sat at a booth on a busy Saturday morning last week.

She paints and sketches, and she was selling some of her work, which stood out, with bright imaginative colors painted on journals and jars. There were landscapes, clouds and moons, and abstract, marbled patterns.

DeSouza said that as a child, she loved journaling, and marveled at the work of a cousin. She has followed that path ever since.

Sammy Metzger, who manages Arts in the Plaza with her husband, Ben, said the event is open to all who want to exhibit their art, and about 40 do each week. She added that the event also gives the participants a chance to improve their work, based on observers’ comments and critiques.

“Everyone applies to Arts in the Plaza by sending in links and examples of their work,” Metzger explained. “As soon as I opened Janelle’s, I was instantly in love. She does beautiful, vibrant paintings. Her work makes me instantly happy.”

This is DeSouza’s first year of exhibiting at Arts in the Plaza, and Metzger said that she “has been evolving since she started coming. She started on small canvases, and now paints the covers of sketchbooks and journals for people.”

DeSouza went to Uniondale High School, and recently earned a master’s degree in art education from Hofstra University. She is now a full-time artist, creating and selling her work at fairs like Long Beach’s. She is also a face painter at children’s parties.

DeSouza said that each piece of her work has a meaning and a purpose. She paints journal covers because of her own love of journaling, and wants to spread its positivity. Each cover has a matching back, where she paints words that she feels connect to the work on the cover.

Last Saturday she was selling what she called a transgender visibility journal, as well as a bisexual visibility-inspired cover using the colors of their designated pride flags. “There’s a meaning behind pretty much everything,” DeSouza said. “At the back of the journals, there’s words describing the cover art — which is why I love journaling. She explained that a cousin who is also an artist turned her on to journaling, and to the idea of decorating journals’ covers.

She loves the meticulous nature of drawing, DeSouza said, but feels she can express herself more freely through painting. “I was always into art when I was little,” she said, “and when I started taking it seriously was in 2020, when I went to grad school for art education, and that’s when I got better at drawing. Last Aug. 7, that’s when I did my first painting, and realized, ‘oh, I really like this,’ and that painting sold in June of this year which was really exciting.” She sold that first painting, along with some other small pieces, at Haus of Art, in Long Island City.

Her biggest inspiration she said, is Giselle Ibarra, who is known as sincerely.art on Instagram and Twitter. “Her art really speaks to me,” DeSouza said, and I feel we have a similar style of artwork.” Ibarra paints objects like puzzles and containers and even makes rugs.

Both artists have a dream-like style, using bright colors and imagery like clouds and flowers. “I use acrylic, mostly,” DeSouza said of her process. “I draw a lot, too. My favorite isn’t necessarily painting, but when I do paint, I love how it looks — especially landscapes.

“I like drawing for different reasons, for its technicality and improving at it, while, with painting, I like the fact that it’s just freeing and that you’re releasing energy.”

DeSouza envisions her mason jar paintings functioning as holders for items that are special to people, whether they’re flowers or keepsakes. Her clear mason jars were covered by a layer of acrylic paint in abstract monochromatic designs that almost looked like pastel marble.

“Create for who you are, and not for what other people want you to be,” DeSouza said. “Do what inspires you and what your passion is.” She encouraged this attitude not only for artists, but for everyone, and emphasized how art has enabled her to express herself.