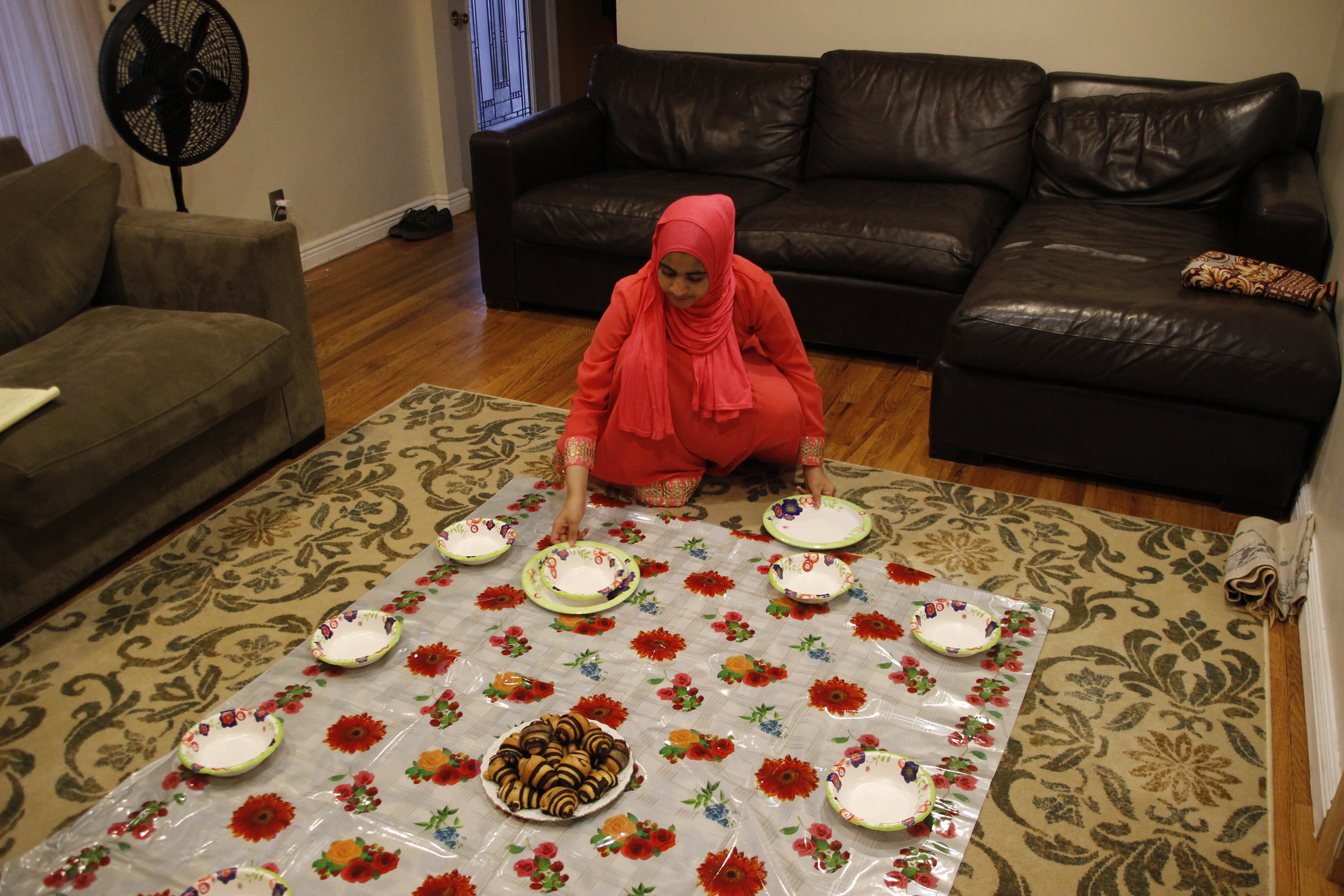 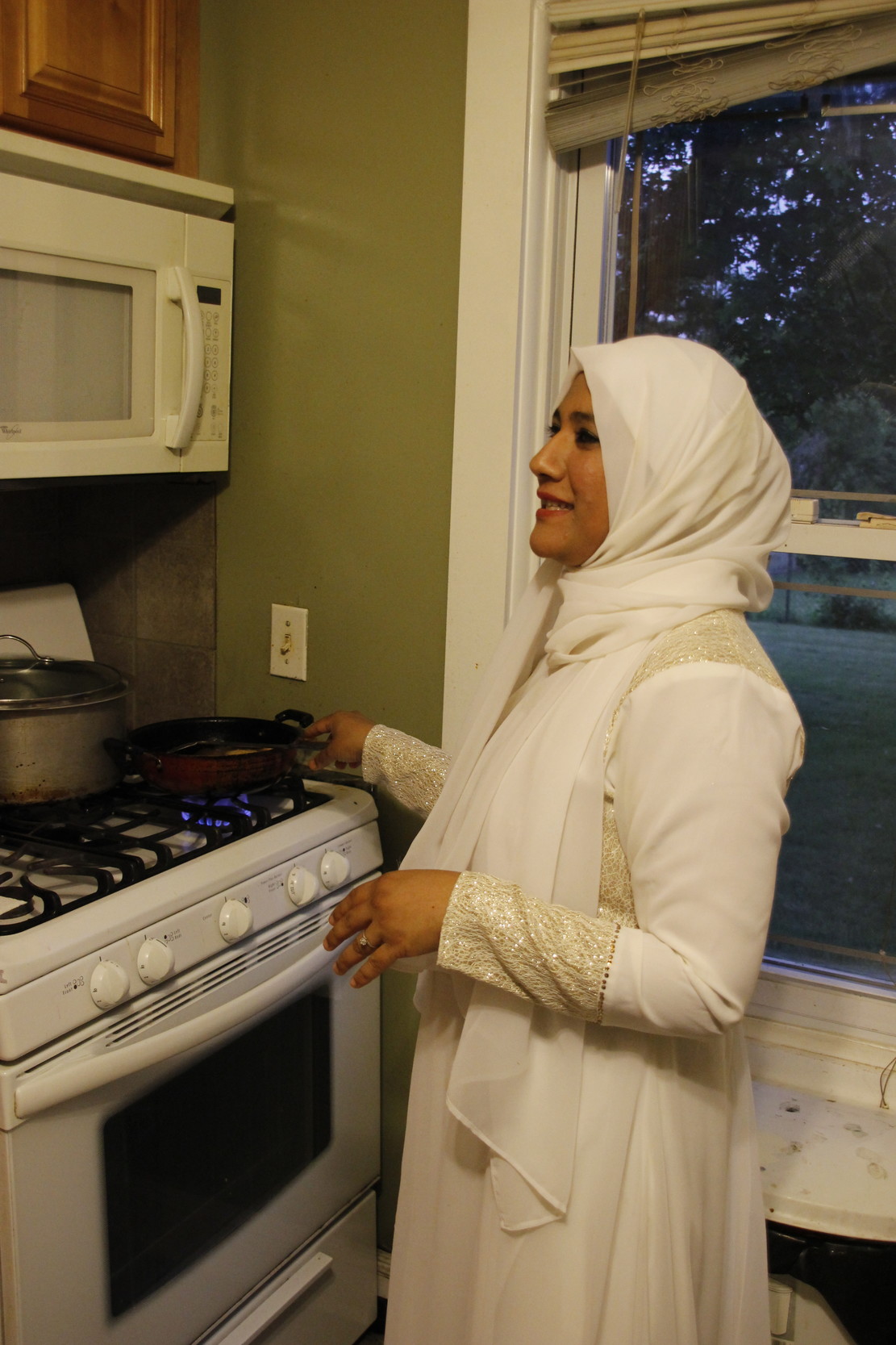 Ruhee Kapadia, 36, fried samosas in her kitchen in preparation for one of Ramadan’s final meals.
Nick Ciccone/Herald 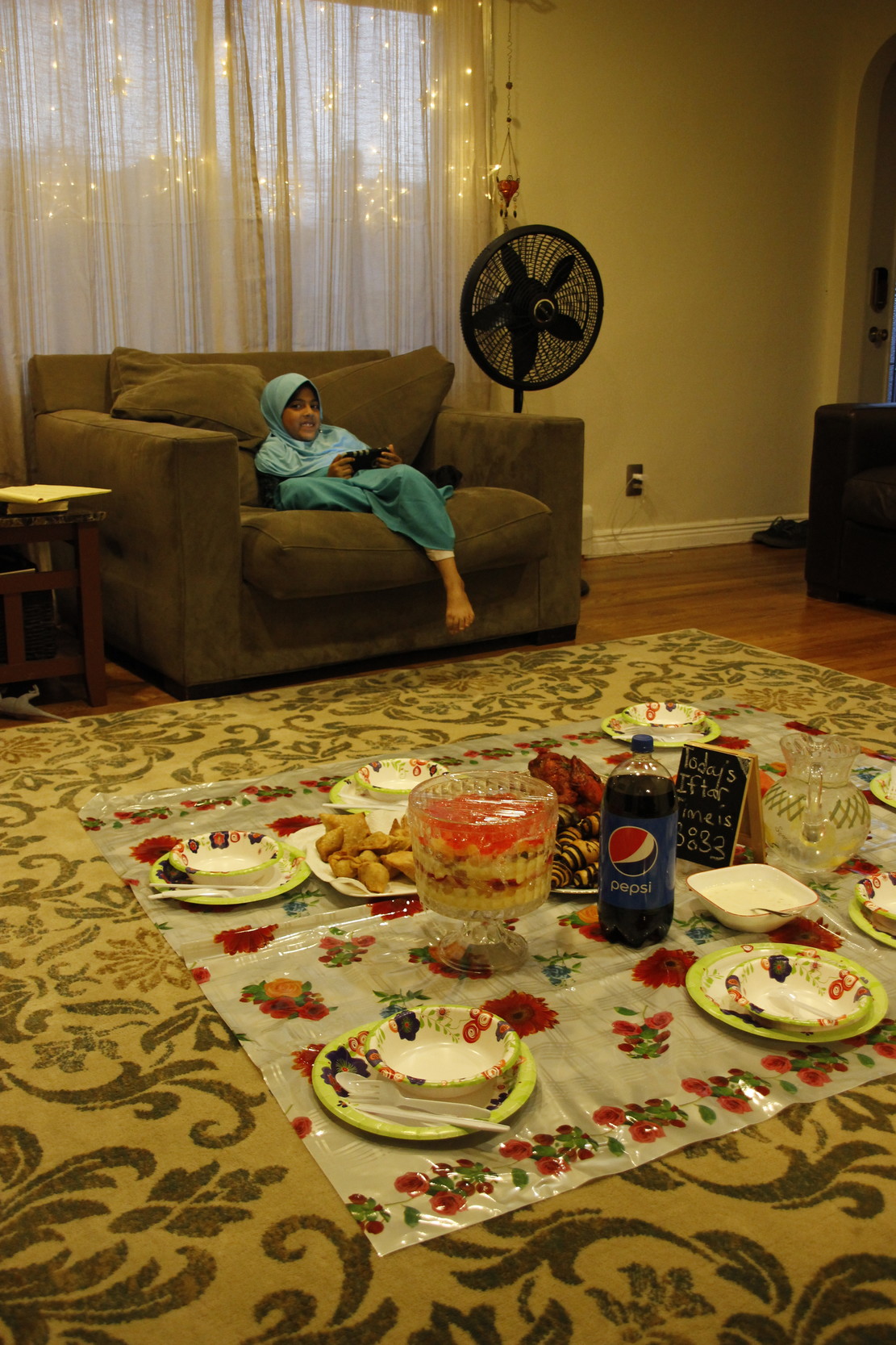 As the sun set on the second-to-last day of Ramadan, Ruhee Kapadia pointed to the minarets of Masjid Hamza from the backyard of her home on Bank Street and remarked on how close she felt to God.

She and her family moved to Valley Stream from Flushing, Queens, in 2009, and the proximity of their new home to the mosque seemed like a sign of good things to come.

Ramadan is the ninth month of the Islamic calendar, when some 1.8 billion Muslims worldwide fast during daylight hours to commemorate the revelation of the Quran to the Prophet Muhammad. The end of the holy month is marked by Eid al-Fitr, an annual feast and celebration.

“The whole month of Ramadan is socializing, also,” said Kapadia, 36, who teaches at an elementary school in Queens. “There are people we don’t see all year round — we see them at this point [in] time. We all come together — for like 30 days, it’s like we’re camping. Like, literally, it’s just that experience. We are eating together. We are sharing food together. Everybody cooks things and bakes things.”

But this year, Kapadia admitted, has been slightly different.

In the month of Ramadan alone, according to published reports, two men defending Muslim women on a commuter train in Portland, Ore., were killed by an extremist, a protest called “March Against Sharia” was held in more than a dozen states nationwide and, most recently, a Muslim teenager was killed on her way to a mosque in Sterling, Va.

“She was not far off from the mosque when it happened,” Kapadia said of the Virginia slaying. “And she was with a group of kids … So I fear that now, like being around the corner. I still fear that.”

Ruhee, her husband, Abdulkadir, 42, and their four children live about a two-minute walk from the Valley Stream mosque. Lately, however, they have been opting to take the car more often.

Though rattled by the events of the last several months, the family showed no signs of despondency. If anything, the divisiveness of the national conversation about Islam has strengthened their commitment to being better parents, better community members — and better Muslims.

Ruhee sent her son Zaid, 13, a tray of food in hand, to a neighbor’s house while she and her daughter, Maysa, 14, prepared a meal for the family to break the day’s fast.

“I always tell my kids, too, whenever you share, God will send you back,” Ruhee said. Like fasting, charitable deeds are fundamental to Islam — particularly during Ramadan. Before Zaid returned, as if by magic, another Muslim neighbor dropped off a tray of food for Ruhee and family. She laughed and said, “See?”

In the living room, Safura, 6, waited for iftar, the ceremonial breaking of fast. Both the elderly and young children are exempt from fasting requirements, and she was participating for the first time. “It was good,” she peeped. The hardest part was “not eating the whole day.”

For Ramadan, the Kapadia household partakes in several family traditions. A “good deeds chart” motivates the younger children to be well behaved during the holy month, and high scores yield prizes. The oldest siblings, Maysa and Zaid, compete by racing through readings of the Quran. In addition, many Muslims buy new clothes toward the end of Ramadan in preparation for Eid al-Fitr. Zaid said that when he’s looking for an item, it has to be “more flashy” than usual. The Kapadias also string decorative lights and festive signs on the front of their house.

Though there is a great deal of solitary reflection and prayer during Ramadan, Abdulkadir, an applications analyst at North Shore University Hospital, explained that much of the holiday season — and life in the neighborhood in general — revolves around the mosque.

“You can see, it really brings us closer,” he said. “When the Ramadan comes, it’s like the whole mosque is full. You meet people and you bond with them.” He said that a large turnout for the big holidays can grow the congregation as a whole, as new congregants see how close-knit the community is and want to become part of it.

The mosque is as much a place for socializing and leisure as it is for prayer — there is a basketball court and a playground for children of Hamza Academy — Masjid Hamza’s private school.

The others all attend Hamza Academy, which ends at seventh grade. Zaid, who will start eighth grade in the fall, will need to decide where to attend school.

Ruhee and Abdulkadir both have encountered many non-Muslims who do not know, or understand, the basic tenets of their religion. But their children, who have mostly gone to private school, have not.

Away from the children, while frying samosas in the kitchen, Ruhee said that she does not want them to be sheltered, but was unsure whether forcing them into public school in the future was an alternative.

“My biggest dilemma after Ramadan is going to be deciding for their schools,” she said. “I want to know: Will they be able to adjust? There’s so much happening, is it the right time to make that decision now? Or should I just leave them in their former school? So, I — it’s a lot. It’s a lot going on.”

At precisely 8:33 p.m., sunset, the family said a blessing on their living room floor in front of the food — tandoori chicken (a traditional Indian dish), samosas, gelatin with fruit and nuts, dates and a drink called falooda — a pinkish smoothie-like mixture of rose syrup, vermicelli, basil, jelly, milk and a scoop of ice cream.

After dinner, the family walks to the mosque, the heat of the summer day still rising from the concrete — a ritual that would continue after the end of the holy month, as Muslims pray five times daily.

Abdulkadir yelled from the driveway back at the house for the kids to hurry up, and Ruhee joked that he likes to get a good spot in front for the evening prayer services. Cars lined both sides of the street as congregants spilled over the sidewalk walking north toward the mosque. The Kapadias offered their driveway to create more parking spaces.

Despite recent anxiety-provoking headlines, the Kapadias made it clear that they were hopeful for the future.

“It’s all about, like, being human beings,” Ruhee said. “And having that big idea of, like, humanity. We all breathe the same thing, we eat the food, and we need to love each other and respect each other.”