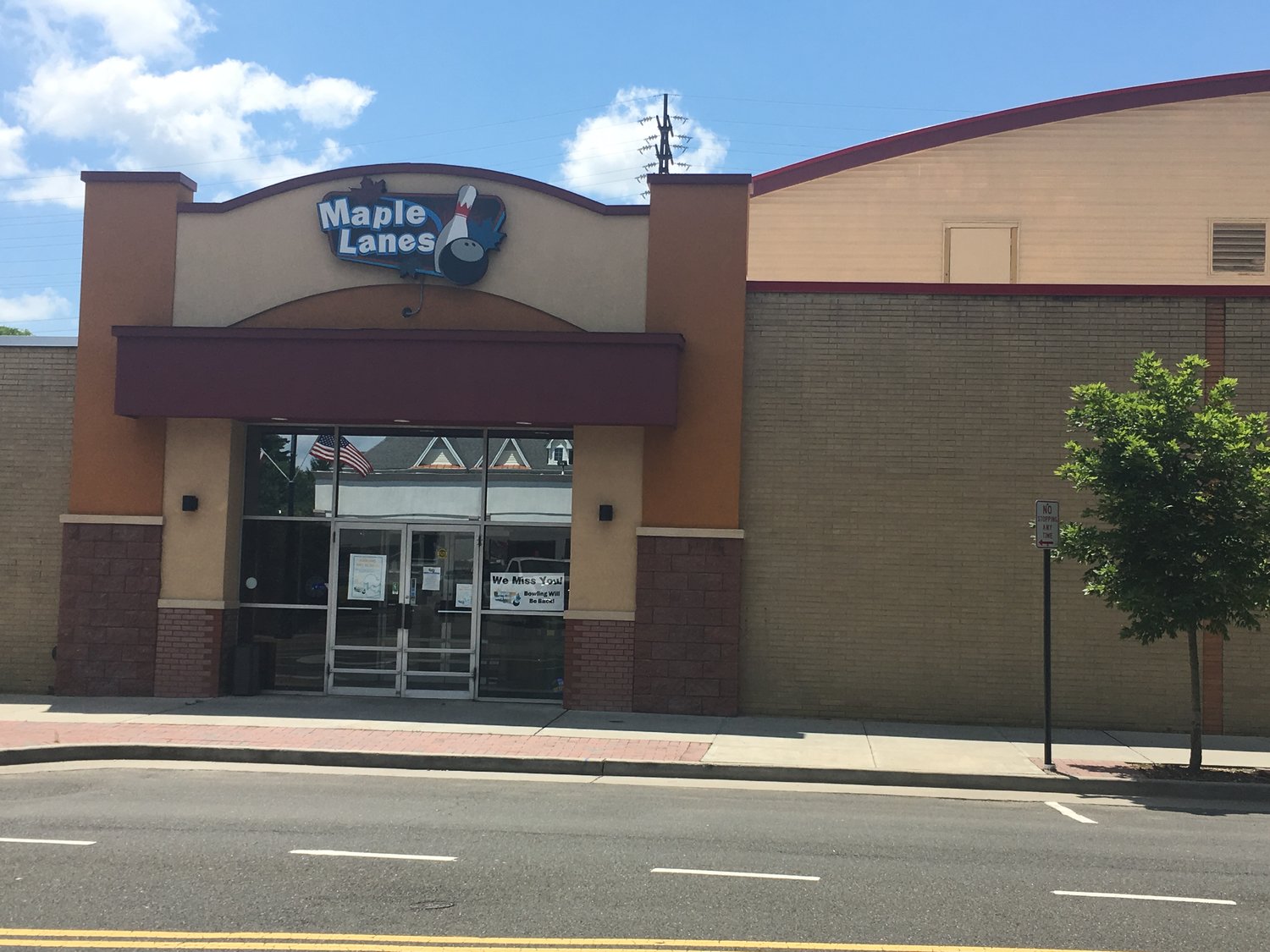 Maple Lanes in Rockville Centre was originally slated to reopen in Phase Four. As of July 10, there is still no timeline in place for when bowling centers can get back in business.
Jill Nossa/Herald
By Scott Brinton and Jill Nossa

While low-risk indoor arts and entertainment is included in Long Island’s Phase Four reopening of the economy, which began on July 8, gyms and bowling centers have been excluded, causing a strain for several Rockville Centre businesses.

Maple Lanes RVC is one of four bowling centers in New York owned by Maple Family Centers, which had to terminate nearly all of its 150 employees since the start of the pandemic. Maple Lanes RVC has been proactively taking steps to re-open safely since it was ordered to close on March 16, and the family owned and operated business even tried to push for reopening in Phase Three.

“Our bowling business can be socially distanced and designed to be situated more like restaurants,” Teresa LaSpina McCarthy said. “We are fully confident that we are ready to operate our bowling business in a safe, clean and compliant manner.”

Last month, McCarthy, who owns Maple Family Centers along with her father, John LaSpina, and her brother, Joe LaSpina, sent a letter to County Executive Laura Curran requesting inclusion in Phase Three and asking her to advocate to the governor on their behalf.

Along with the letter, she sent the center’s comprehensive operating manual for when they are allowed to reopen. She said it includes a safety plan for employees and patrons that strictly follows the Centers for Disease Control and Prevention guidelines, and that they spent three months cleaning, sanitizing and retrofitting the center to help ensure a safe environment. Maple Family Centers is part of the Bowling Trade Association, and as of Friday, McCarthy said, they still had been given no timeline as to when bowling centers, or any indoor facility with re-circulated air, would be allowed to reopen.

“It’s been tough for everyone,” she said. “We’ll follow the rules and comply with the guidelines, but each day that goes by, it gets harder. There’s no way we can operate without allowing customers in the door.”

Gyms were also supposed to be part of Phase Four, but Cuomo announced late last month that fitness centers would not be included, citing concerns over aerosol transmission through the air conditioning. While Sportset Health and Fitness Center in Rockville Centre has been able to offer virtual classes, it has also been proactive since the beginning, making a large investment to ensure the facility is safe and sanitary for its members.

“We have been working hard to make sure all of our efforts not only meet, but exceed all the CDC safety guidelines in regard to social distancing, and sanitization,” owner Dennison Silvio said.

The facility has made a number of modifications, including installing no touch automatic door openers, contactless facial recognition temperature scanners, Plexiglas barriers, and ultraviolet light sanitizers in the ventilation system, a germicidal tool to purify the air. Members will be required to wear face masks, equipment has been rearranged to maintain social distancing, and members will be required to make appointments for fitness classes.

In the meantime, Sportset is offering group fitness, yoga and spin classes outdoors.

Universities and colleges were a part of the plan, but Governor Cuomo said there was no word yet whether the state’s 700 public school districts could return to in-person classes.

The governor said all school districts have been directed to develop reopening plans, but he is taking a wait-and-see approach whether students will head back to their school buildings in September.

In addition to higher education, industries that will be able to open Wednesday include:

The governor praised New Yorkers for their vigilance and resilience throughout the Covid-19 pandemic. He said, though, that he worried people might become apathetic and arrogant, believing they had beaten the virus.

He noted that the infection rate remains just below 1 percent statewide — down from nearly 17 percent on Long Island and more than 20 percent in New York City at the height of the pandemic in April.

More than 54,000 New Yorkers were tested for the coronavirus on Sunday, and 518 of them were positive for the disease.

“The numbers have actually declined since we started reopening” seven weeks ago, Cuomo said.

He also said there were fewer than 10 deaths statewide overnight from July 5 to 6. But he said, the virus is still out there, so people must continue to wear masks and maintain social distancing in public spaces, according to state law. He implored local police departments to enforce the law.