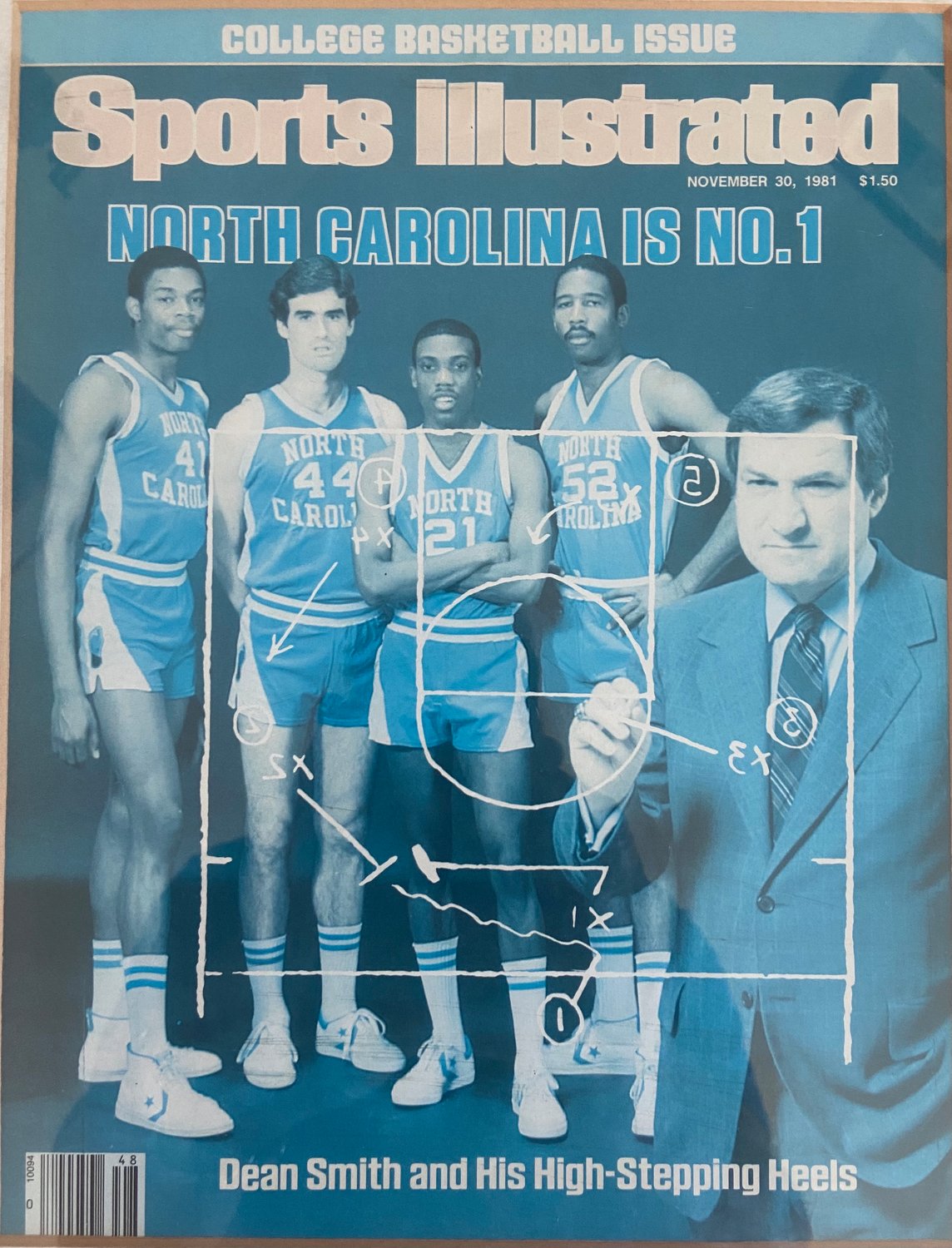 Former East Meadow resident Matt Doherty, second from near right, appeared on the cover of Sports Illustrated in 1981 with University of North Carolina teammates, from near right, Sam Perkins, Jimmy Black and James Worthy, and coach Dean Smith. They went on to win the NCAA men’s basketball championship in 1982.
Courtesy Matt Doherty 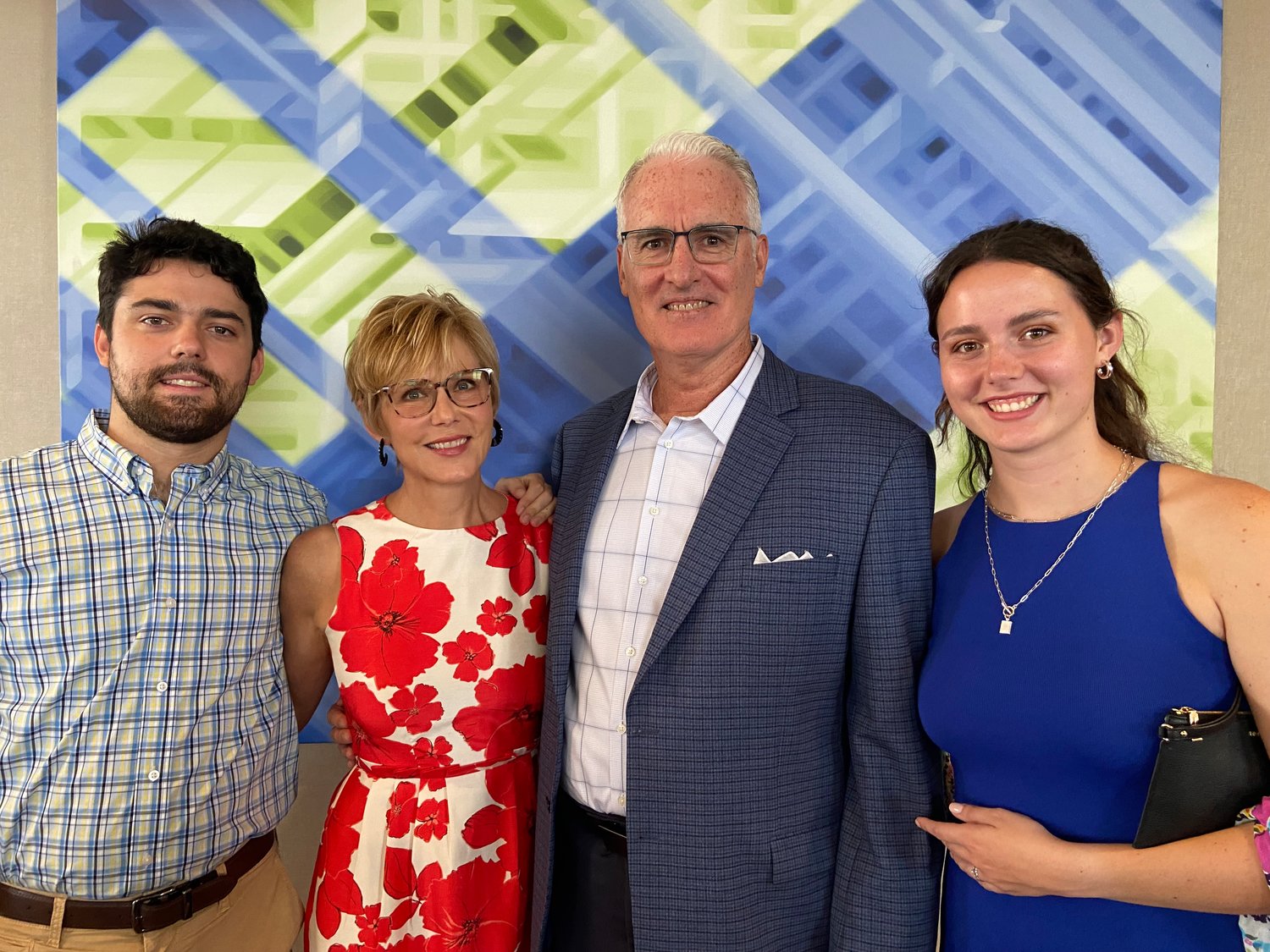 Matt Doherty and his wife, Kelly, have two children, Tucker, 24, and Hattie, 22, who lives in Long Beach.
Courtesy Matt Doherty 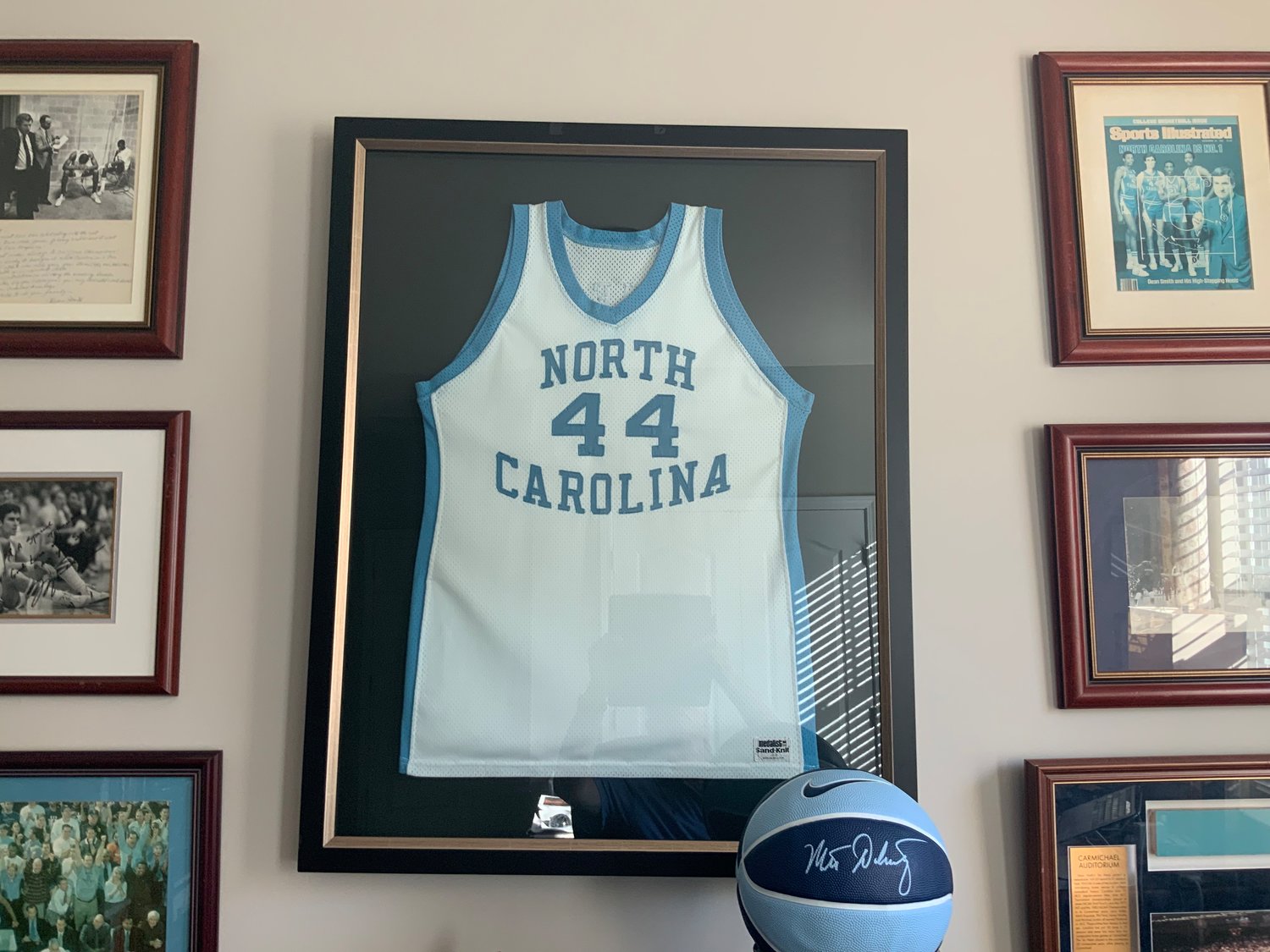 In Doherty’s home office, he displays his UNC jersey among other memorabilia from his basketball career.
Courtesy Matt Doherty 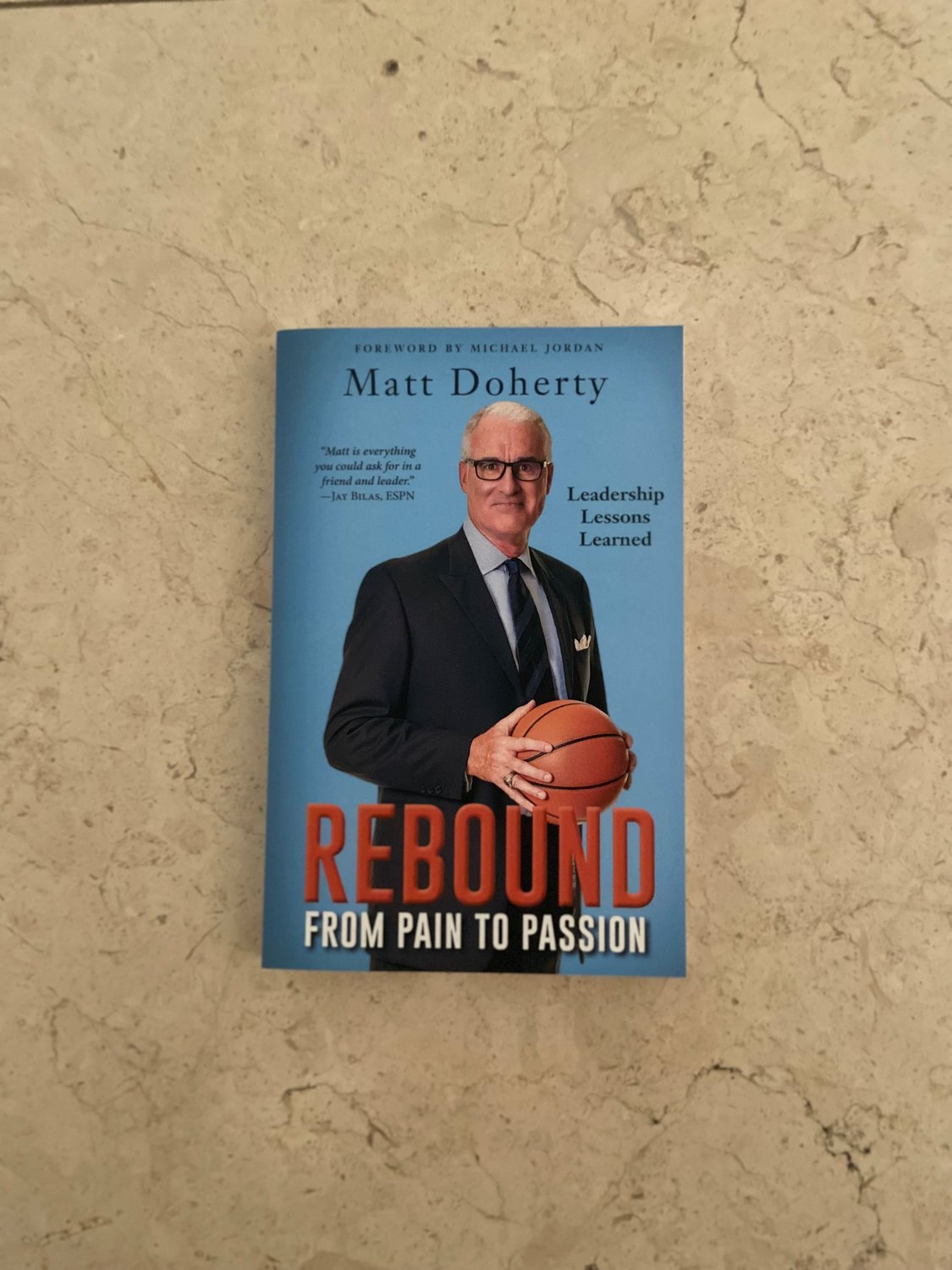 Doherty shares his good and bad basketball moments in his new book.
Courtesy Matt Doherty
Previous Next
By Laura Lane

In the 1970s, East Meadow’s Prospect Park was the place to find Nassau County’s best basketball players at night, including high school and college players and the occasional professional like Julius Erving.

As a skinny 12-year-old, Matt Doherty, now 59, would pedal his bike as fast as he could after dinner to arrive at the park, three blocks from his East Meadow home, to play the first game on Court One. The park was “like heaven,” he said. It was where he dreamed of becoming a professional basketball player.

Growing to 6 feet 7, he went on to win state championships at Holy Trinity High School in Hicksville, and he was recruited to play college ball at the University of North Carolina at Chapel Hill, appearing on the cover of Sports Illustrated in 1981 with three teammates and their coach for the College Basketball Issue. Doherty was a sophomore and a Tar Heels starter when the team captured the 1982 NCAA men’s basketball championship with Michael Jordan, Sam Perkins and James Worthy.

Jordan was a freshman that year. The star shooting guard, considered by many to be the greatest basketball player of all time, wrote the foreword to Doherty’s recently published book, “Rebound: From Pain to Passion.” In it, Doherty shares stories from his career, offering help in navigating “the rough seas of leadership through life and business.”

“From our earliest practices at North Carolina, I could see that Matt was a leader,” Jordan wrote. “He was smart, methodical and fundamentally sound. Because of Matt, I became a better player.”

Doherty never played in the NBA, but he became head coach at the University of Notre Dame and UNC. His accomplishments were driven by his early years in East Meadow, he said, as one of five children in an Irish Catholic family.

At Prospect Park, he learned about meritocracy, the system by which talent is rewarded according to achievement. All that mattered was one’s ability to help the team, he said, noting, “If you lost at the park, you sat.”

Doherty played baseball, basketball and hockey as a kid. At first, his passion was baseball. His father, Walter, who owned a Pepsi route in Manhattan’s Greenwich Village, had been a minor league pitcher.

“Dad always told Matt you need a plan B,” his sister Nan Doherty said. “. . . He told Matt he could get hurt or not do well, something you don’t see as a kid.”

Nan, 65, now of Atlantic Beach, remembers her brother as quiet, academic and intensely focused on basketball. “As soon as he was old enough to cross the street himself, he went to the courts at the park where I was a lifeguard,” she said. “. . . He slept with his basketball.”

He and his brother John used to practice dribbling as they walked back and forth to the park, and they would jump as high as they could to touch the molding on the tops of doors at home.

Tom Dolan, now 55, arrived at St. Raphael’s Elementary School in East Meadow four years after Doherty. “There was such a buzz in town about Matt, even when he was in eighth grade,” recalled Dolan, who is now on the board of the St. Raphael’s Catholic Youth Organization. “He was a high-profile athlete. Everyone came to see him play for CYO back then. When he won the 1976 Nassau County CYO Championship, it was a big deal.”

Private high school coaches attended Doherty’s CYO games to recruit him. Those games, Dolan said, were “standing room only. We all used to follow him like he was a professional athlete.”

Doherty made varsity at Holy Trinity as a freshman — the youngest-ever player to do so. “I was told to stay humble [by my parents] and not do anything stupid socially,” he recalled. “The upperclassmen were respectful of that. I wasn’t included when they were going to drink beer, and they were protective of me like big brothers.”

UNC recruited him during his junior year, and he joined the Tar Heels in 1979. Dean Smith, UNC’s coach, had already led the Team USA basketball squad to a gold medal at the 1976 Olympics. Doherty described Jordan as a great teammate and good friend who was highly competitive. They still see each other a few times a year.

Doherty was certain he’d be drafted to the NBA. Although he did play in two NBA scouting events, he was never picked.

After college, Doherty returned to East Meadow and then moved to Manhattan, going to work on Wall Street in 1984. A bond salesman for Kidder, Peabody & Co., he was unhappy. After four years, he quit and moved to Charlotte, N.C., to try his hand at real estate.

There, he accepted an assistant coaching position for Bob McKillop, who had been his coach at Holy Trinity, for a group of eighth-graders in an amateur athletic club. “I loved coaching,” he said. “Loved the strategy, putting players in positions to be successful, and I loved teaching.”

Then he got a job coaching at Davidson College in 1990. “We worked 12 hours a day,” he said. “I didn’t have that passion for my work on Wall Street.”

“We ranked number one the first year, and I was National Coach of the Year,” he said. “But the next year we didn’t do very well. I had a young team, and it hurt us the third year, and we couldn’t recover.”

Doherty was forced to resign, a stinging public humiliation, he said. He then went on a “leadership journey,” studying at the Wharton School of the University of Pennsylvania and the University of Virginia’s Darden Graduate School of Business. Now he works with small to midsize companies helping people become better leaders.

Doherty lives in Mooresville, N.C., with his wife, Kelly. They have two children, Tucker, 24, and Hattie, 22, who lives in Long Beach.

“I’m coaching, but not basketball,” Doherty said. “I’m coaching leadership. I’ve learned to grow, and I think we should all be lifelong learners. We need to learn how we can make things better.”

“Rebound: From Pain to Passion” can be ordered through Doherty’s website, rebound-book.com, and in bookstores.