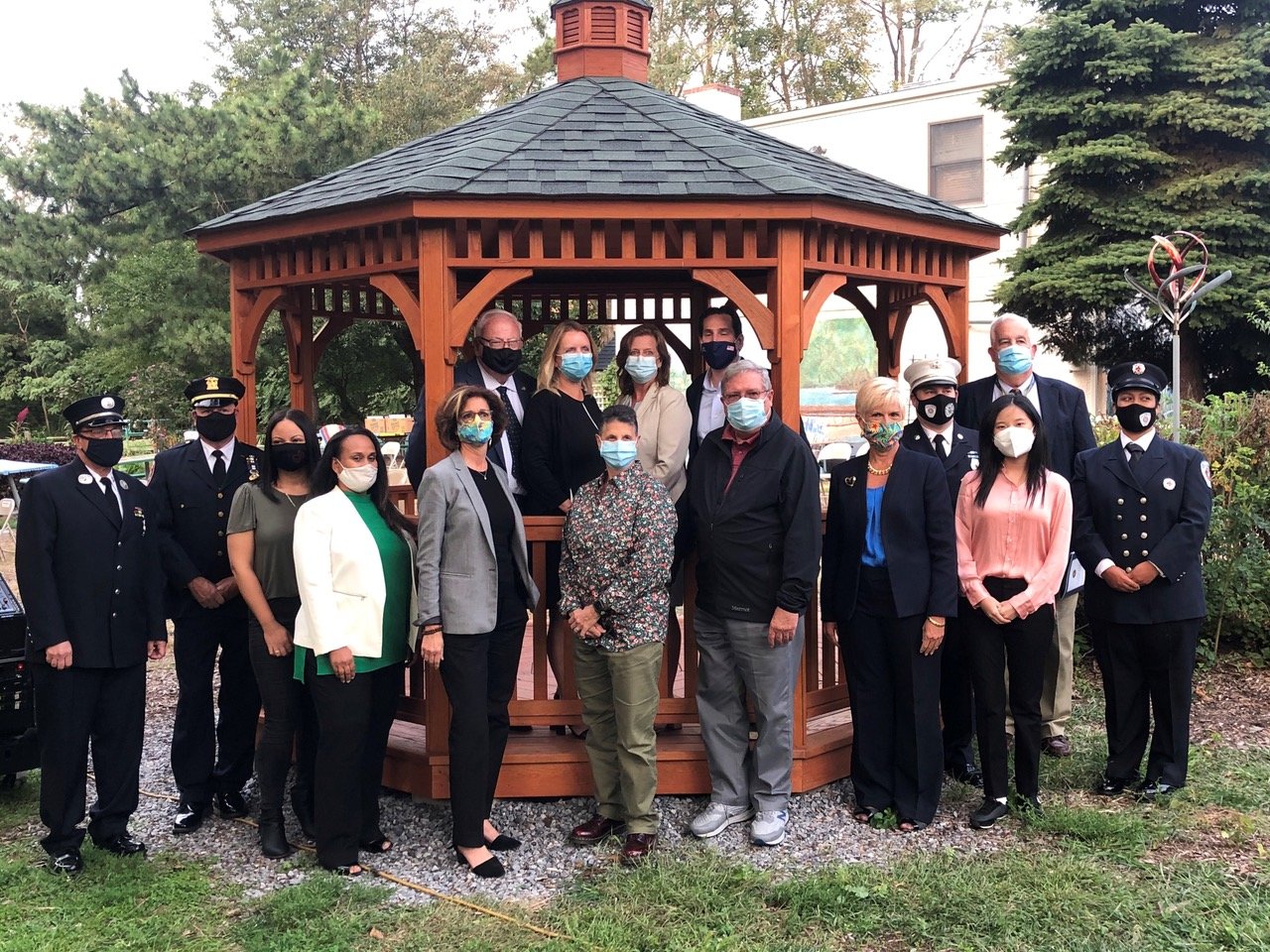 Nassau County Legislator Debra Mulé (D-Freeport) recognized 16 people and organizations as “Covid Heroes” of the Fifth Legislative District during a ceremony at the Baldwin Historical Museum on Sept. 15.

Among those honored were Zhanna Weinstein and Lonnie Greene, of the Baldwin Fire Department; Nick LaBorne, of the Freeport Fire Department; John Carey, a volunteer at the Church of St. Christopher food pantry; Wendy Moreta, a nurse at the South Ocean Care Federally Qualified Health Center; Sherisse Young, director of Pupil Services at Baldwin Public Schools; John Jacobsen, a sergeant at the Freeport Police Department; Denise Martinez, manager of the GalaFresh supermarket in Baldwin; Charles Dudley, an employee at the Town of Hempstead’s Sanitary District No. 2; Christina O'Leary, director of the Sandel Senior Center; and the Baldwin Post Office staff.

“Whether it was responding to a call to provide assistance to those stricken with the virus, donating their time and service to volunteer, educating our youth or inspiring and lifting others up during this crisis, every person being honored here tonight has emerged as a pillar of our community through the valuable contributions they made to benefit the well-being of our district,” Mulé said. “They have responded admirably in the face of enormous challenges presented during these unprecedented times, and I thank them for their steadfast commitment to public service.”

Weinstein serves as a medic for the Baldwin Fire Department’s First Aid Company. Weinstein was finishing up her second year at the fire department when members were being asked to sign up for shifts to ensure they had coverage through the pandemic.  She signed up to 40 percent of the total number of crew shifts, working 1,100 hours in just under four months.

“I’m home, I wake up in the middle of the night anyway, why not just keep going with it,” Weinstein said.

Fellow First Aid Company member Greene was among those in charge of training his members on how to stay safely equipped to avoid the spread of Covid-19. He also worked 13-hour shifts as a physician assistant at Northwell Health’s Long Island Jewish medical Center.

When the pandemic began slowing down in New York, Green served twice on the State Department of Health and Human Services’ Disaster Medical Assistance Team to help other states in the country combat Covid-19.

LaBorne, an ex-captain for the Freeport Fire Department, has served the village for 43 years.

When the pandemic hit, LaBorne assisted the Chief’s Office in securing cleaning and medical supplies for the local firehouses. He also spent hours of his own time briefing the chiefs on the ever-changing nature of the pandemic.

LaBorne worked with Village Mayor Robert Kennedy to establish the proper safety protocols first responders and the village would need to follow to ensure residents’ safety throughout the pandemic.

Carey spent week after week volunteering at the St. Christopher Parish, in Baldwin, working at the food pantry. He picked up food donations and organized the pantry for those in need during the pandemic, where food insecurity greatly increased throughout Long Island.

Carey also volunteers at Operations SPLASH, in Freeport, clearing up debris and pollution along the South Shore.

Moreta has been a nurse at the South Care Federally Qualified Health Center for five years. During the pandemic, Moreta worked with her colleagues to care for the underserved and vulnerable population at the Freeport center, which stood as the epicenter of the third-hardest hit community by Covid-19.

Moreta and the staff at the center tested more than 1,750 people, all while offering resources for food, housing and health insurance.

Young was honored for her work in the Baldwin School District, which credited her as the reason why the district’s remote-learning program has been successful. Young and her team also stepped up and reached out to families with healthcare issues, families with temporary housing and families battling Covid-19 to make sure they had everything they needed to weather the pandemic.

Sergeant Jacobsen, a U.S. Army veteran, has been a Freeport police officer for almost 30 years, serving in the Patrol Division and Community Response Unit. After being promoted to sergeant in 2013, he also began serving as the commanding officer of the Motorcycle Squad and as the police department’s representative to the Freeport Emergency Management Team.

Jacobsen was essential in preparing Freeport officers with the proper PPE equipment.

He also recently completed his six-year term in the Chief’s Office of the Northport Fire Department.

Martinez, a Baldwin High School graduate, was honored for her work managing the GalaFresh supermarket in Baldwin.

As Covid-19 posed a large threat to seniors, Martinez worked to ensure elderly customers were receiving their groceries by staying in contact with them throughout the pandemic. GalaFresh offered seniors online shopping, early morning shopping and pick-up shopping services so seniors could avoid potentially dangerous trips outside.

Charles Dudley began working for the Town of Hempstead’s Sanitary District No. 2 when the recycling program was first implemented in 1988. The district included Baldwin, Roosevelt and South Hempstead.

Despite the pandemic, Dudley reported to work every day to ensure the collection of recycled and refused materials, preventing any health hazard to the district. He also oversaw his crew’s safety and that all precautions were taken to avoid the spread of Covid-19.

When the pandemic shut down the Sandel Senior Center, O’Leary, of Baldwin, led the development of “at home” programs and activities for local seniors.

O’Leary spearheaded bi-weekly TV programs for seniors, which included exercise components, interviews and an activity to do from home. She also created a newsletter to keep the seniors active.

O’Leary also worked with volunteers to call the seniors for regular check-ins.

“This crisis did not create new heroes, instead, it revealed the heroes who were always among us,” Curran said. “You’re the reasons we’re coming back from this with such strength.”