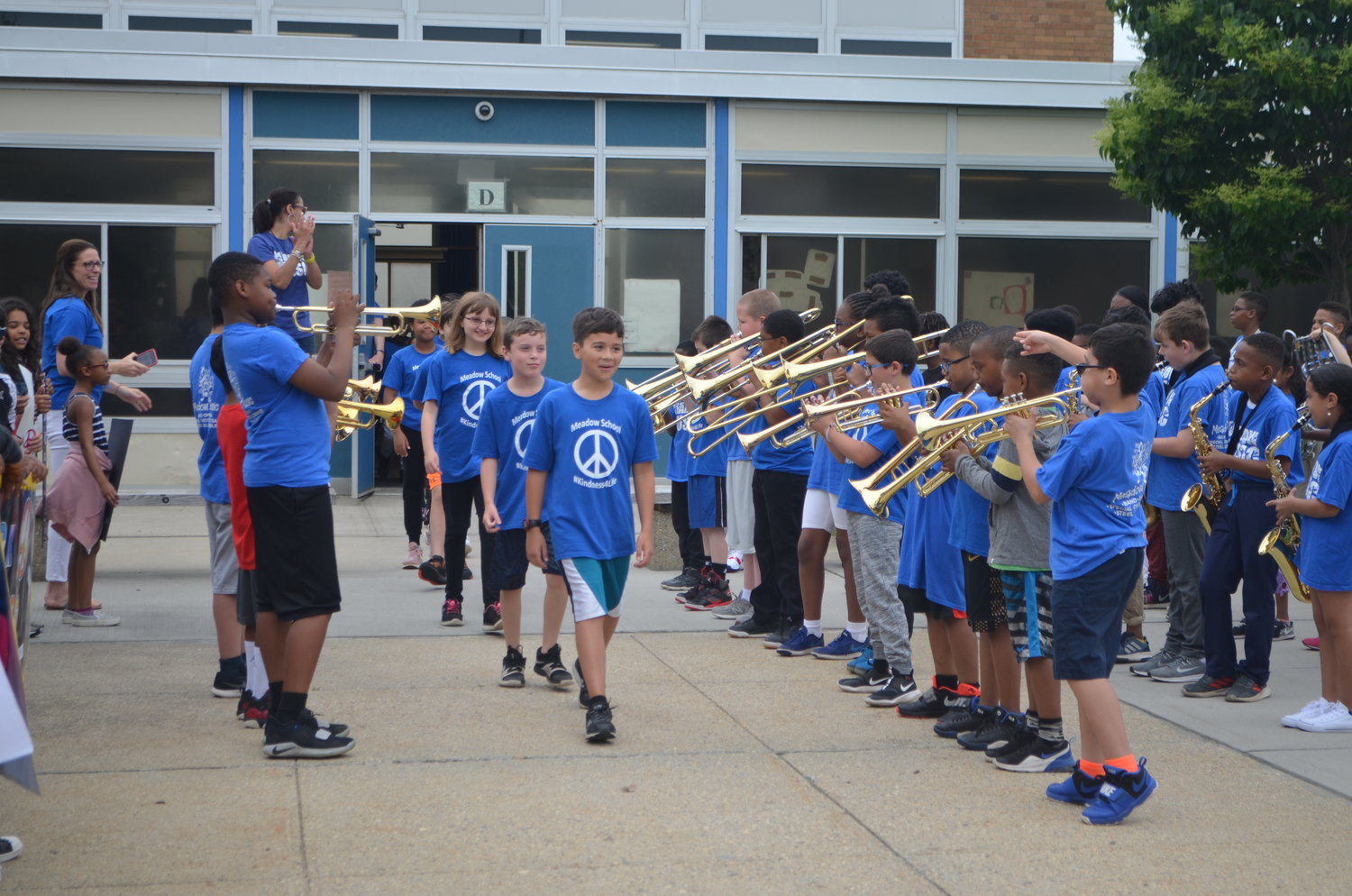 And they’re off to a global contest — The Baldwin School District hosted a send-off celebration June 5 before a group of Meadow Elementary School students embarked on a trip to the international competition of the Future Problem Solving Bowl in Massachusetts. The team took second place.
Bridget Downes/Herald 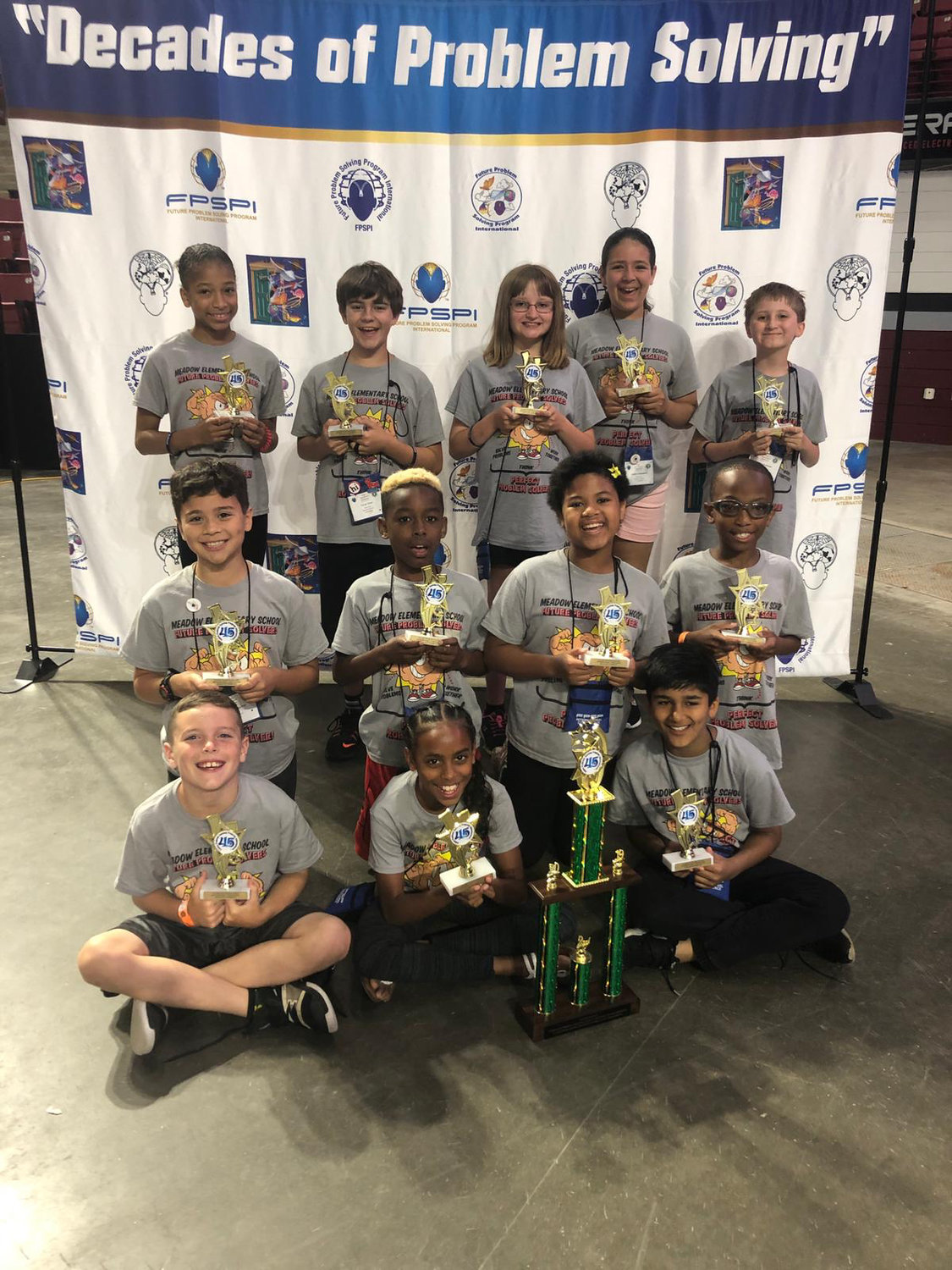 A group of Meadow Elementary School students won second place in the international competition of the Future Problem Solving Bowl this past weekend.
Courtesy photo 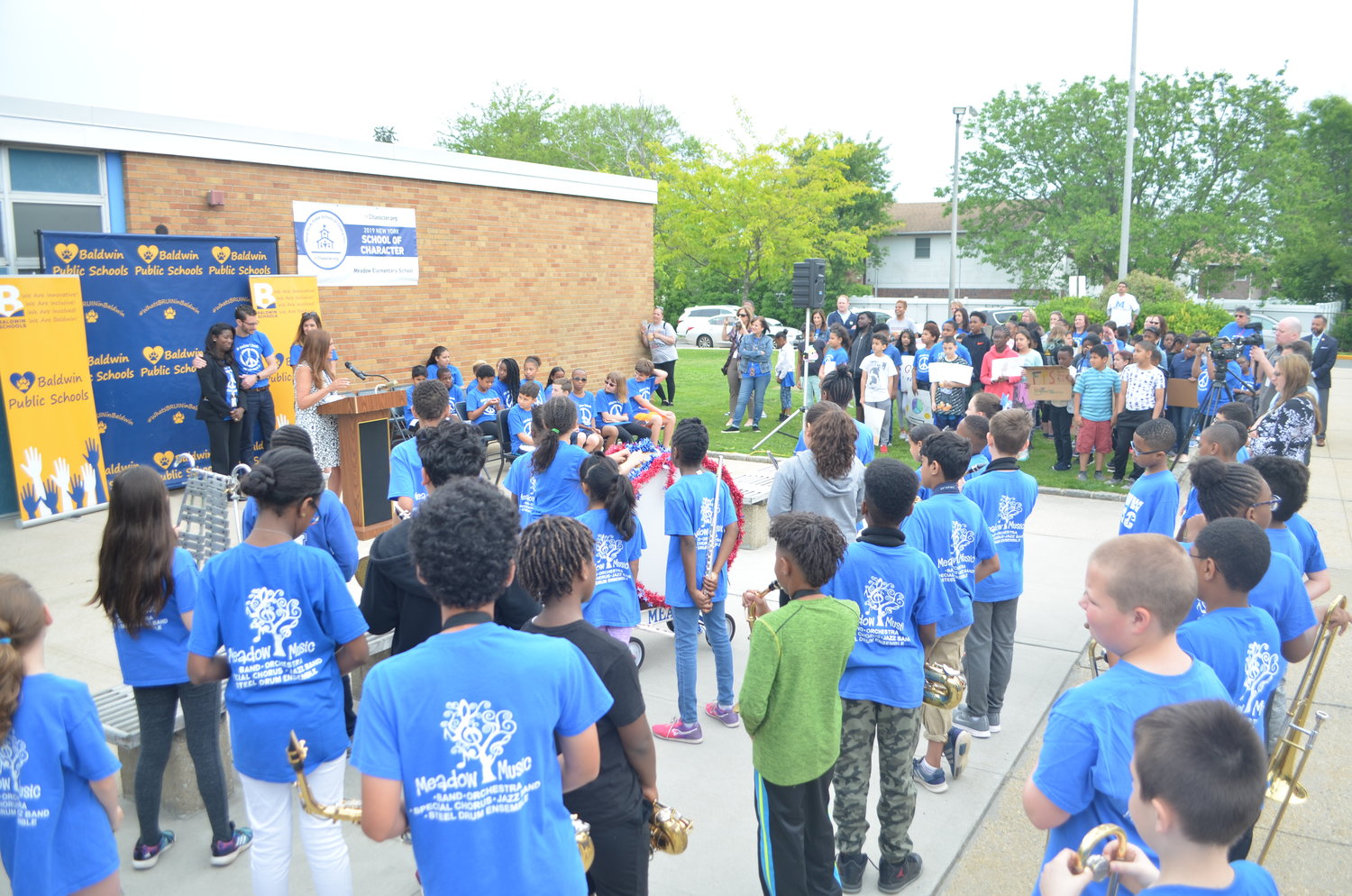 A crowd of about 200 people, including students, parents, administrators, faculty and staff members cheered on the group of students before they embarked on their trip to Massachusetts to take part in the competition.
Bridget Downes/Herald 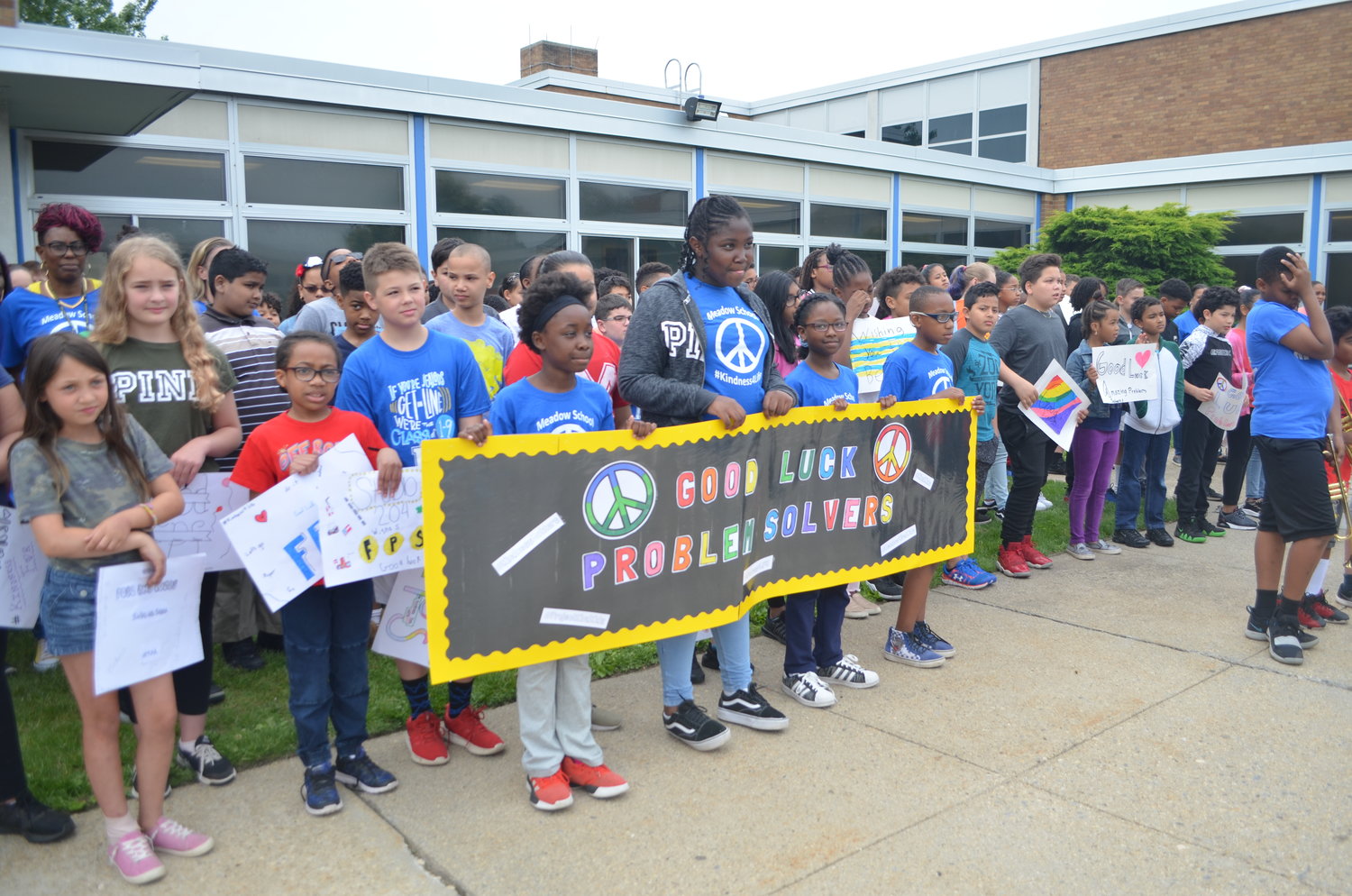 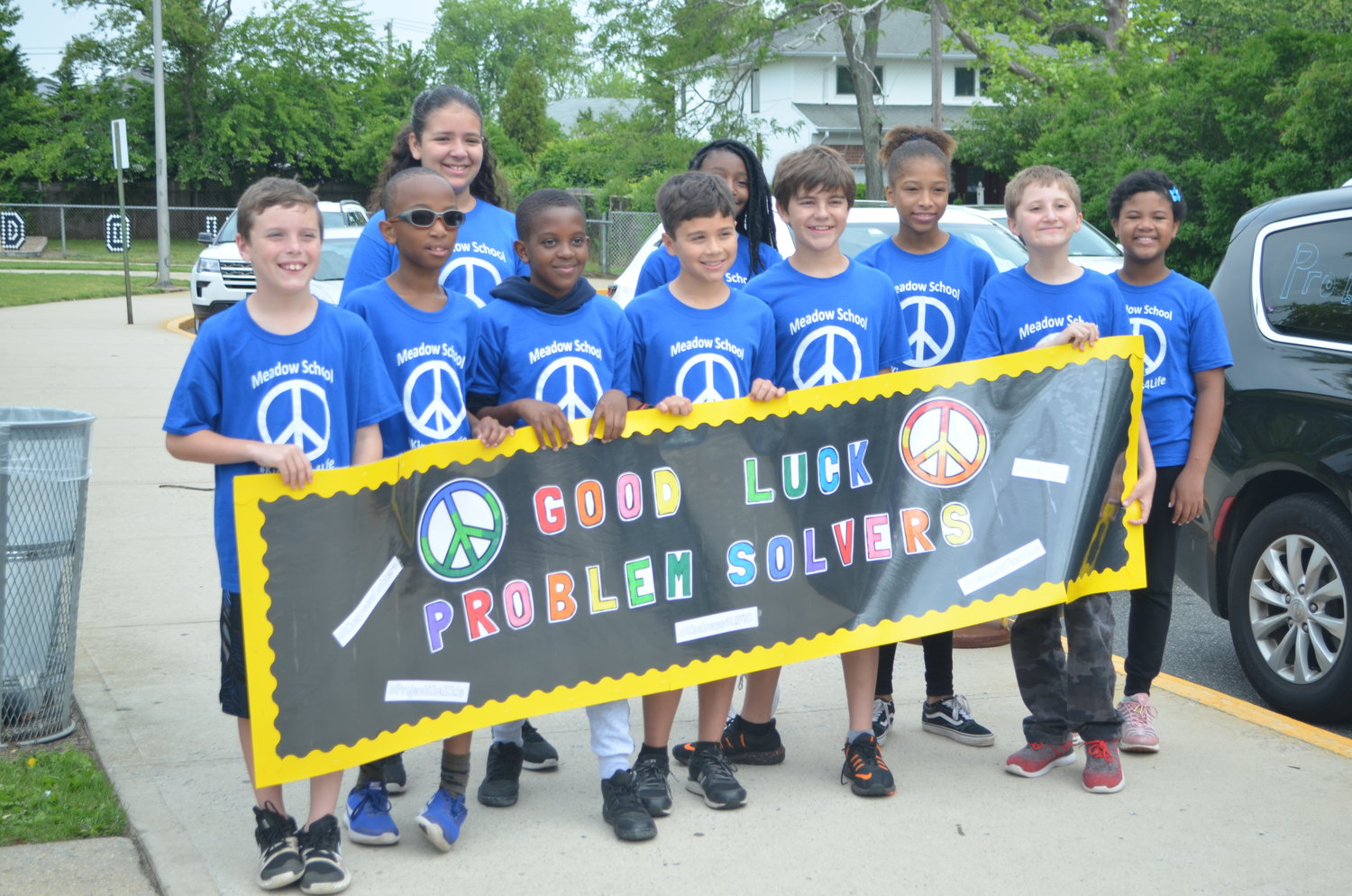 Because of their win in the New York State Future Problem Solver State Bowl, the students advanced to the international level.
Bridget Downes/Herald
Previous Next
Awards received:

After winning at the state level, Meadow went on to compete in the international level of the competition, which was held in Massachusetts this past weekend. The team left on June 5, after the district hosted a send-off event at 9:30 a.m. to cheer on 13 students attending the international competition of the Future Problem Solver Bowl.

About 200 fourth and fifth graders were on hand to support their fellow classmates, and parents, administrators, faculty and staff members were also there to encourage and send the young students off with the support of the entire Baldwin community. The students won second place in the international competition.

The five-day competition took place at the University of Massachusetts in Amherst and drew 2,500 problem solving champions from more than 23,000 students, who compete at local and regional levels throughout the school year, from 13 different countries.

Meadow is the only Long Island school to win in the Junior Division in the state-level competition. All three of Meadow’s competing teams placed in the top three of their competitions, including second and third place for the “Global Issue Problem Solvers” category.

Meadow’s Project Kind Kids — 15 students in fourth and fifth grade — presented their display board to demonstrate their entire process to date on solving their identified problem of unkindness. They were then interviewed by a panel of judges.

For the Community Problem Solving portion of the competition, the 15 students worked together to use the six-step problem solving process to solve the real-world issue in the community — unkindness. The students created a plan of action to solve the problem. The team identified the underlying problems, generated a list of possible solutions, created an action plan, divided the work and created mini teams to complete each task.

The students have worked on training and implementing a Peer Mediation Program to take place during lunch periods, school district officials said. They wrote a script for a film to teach the school about the new program and how it can help solve conflicts. In addition, they created a rap music video to further promote kindness, which they debuted during a “Kindness” assembly they hosted. The assembly featured a guest speaker from Lady Gaga’s Born This Way Foundation, who discussed the impact of kindness on their lives.

“They’ve worked so hard on this and I love that they chose the kindness platform,” said Vanessa Miller, whose daughter, fifth grader Sabra Miller, was part of the Peer Mediation Program. “They try to solve issues during the lunch break, so if kids have issues going on they come to them and talk it out. That’s a good thing so I’m very excited to be on this trip.”

Miller said she’s seen how children can sometimes be mean to each other on social media platforms, and is happy with how the program tackles the issue.

“I’m mostly excited to meet the new people from other places,” said Lucas Duet, a fifth grader who serves as the school’s student president, before leaving for the competition.

The Future Problem Solving Program was founded in 1974 by Dr. E. Paul Torrance to stimulate critical and creative thinking skills, encourage students to develop a vision for the future and prepare students for leadership roles. FPSPI involves thousands of students annually from all over the world.