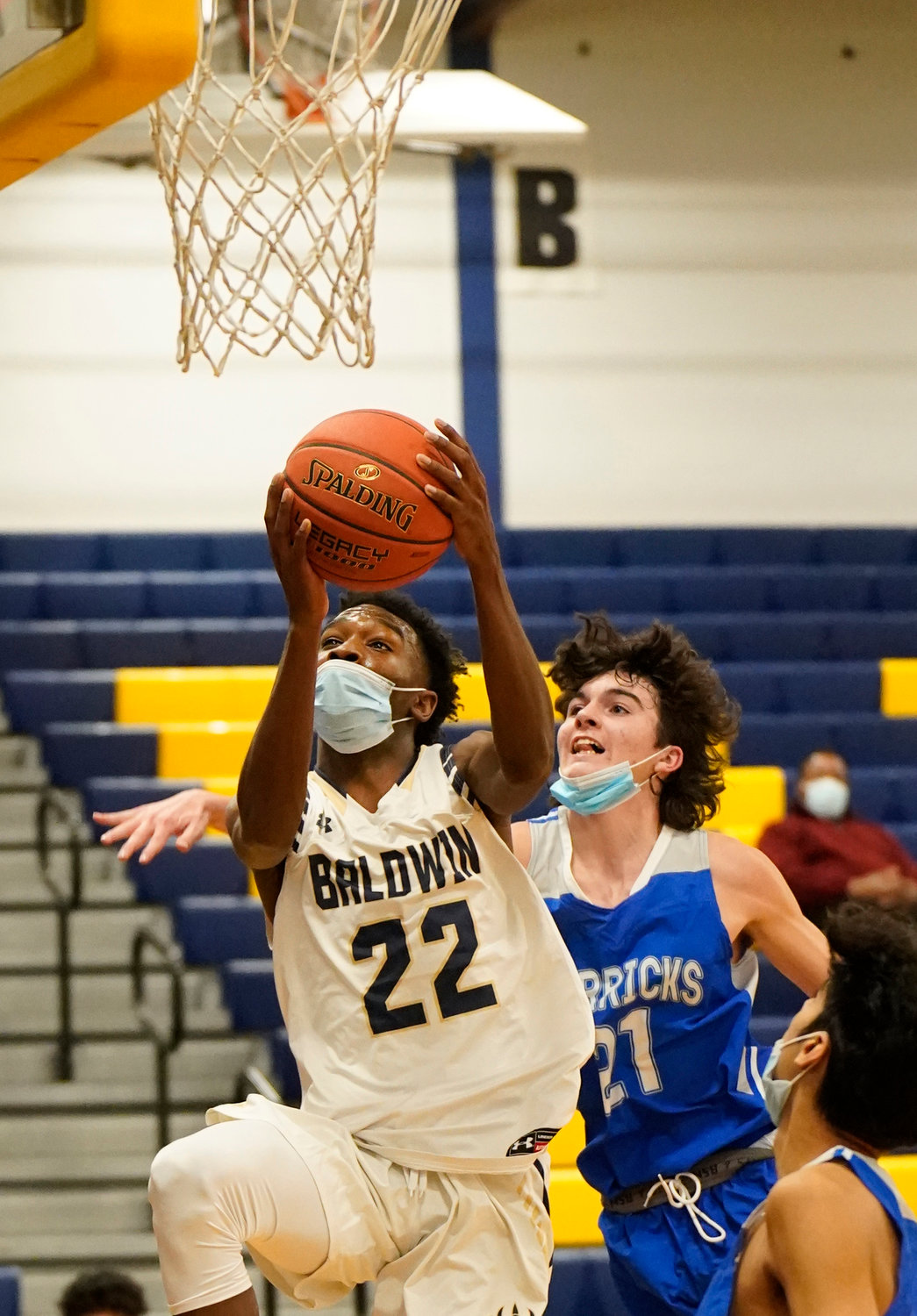 Senior Gerrard Beaubrun had 10 points, 7 rebounds and 4 assists as the Bruins beat Bishop Loughlin, 71-68, as part of the Gary Charles Tip of the Hat Classic.
Ron Manfredi/Herald
By Brian Kacharaba

Darius Burton can now add a new line to his already impeccable resume.
The legendary Baldwin basketball head coach picked up his 350th career win Sunday night with a 70-55 victory over Half Hollow Hills East during the Richard Brown Nassau/Suffolk Challenge at Uniondale High School.
The victory was also the Bruins’ third straight following their only loss of the season to improve to 9-1.
Burton likely would have reached that number last winter if not for Covid and an abbreviated basketball season that saw the Bruins play just four games. He humbly declined to take credit for his latest accomplishment, which also includes three Long Island championships, six county championships and 13 conference titles, including nine of the last 10 full seasons.
“It’s not about me, you’re never as good as your help,” he said two days before the milestone win. “It’s about the talent that’s gone through my program over the last 22 years, which has been tremendous. It’s not like I’m at a college or a Catholic school or a private school where I have to recruit. I get what I get.”


Burton also starred as a player for Baldwin and came close to winning a county championship in his senior year in 1993, but his team fell to Hempstead in the Class A title game. To him, that makes his coaching achievements even more special.
“It’s really unbelievable,” he said. “It’s a blessing. I wanted to give back to the community that was great to me. I couldn’t do it as a player, so one of my goals was to do it as a coach.”
Burton was on the fast track to 350 this year thanks to a start that also includes a 4-0 mark against Conference AA-2 foes. The record is even more impressive considering that all five starters from last season graduated.
“This is a close-knit group,” Burton said. “I usually put them in three summer leagues, but there was only one because of Covid. We had a great summer [and] went undefeated.”
The Bruins are averaging over 68 points a game while yielding just under 42, both conference bests. Seven different players recorded at least 10 points in a game entering Sunday’s matchup and eight are averaging at least six points, including top scorers Jacob Oka and Jamir Stewart at just over 13.
The 6-foot-4 Oka is also the team’s top rebounder, with his best efforts coming against Bay Shore (21) and Farmingdale (16).
“He wants to be great,” Burton said. “He worked his butt off every single day. He can play inside-out, shoot the ‘3’ and handle the ball. He’s been more aggressive under the boards and getting second and third opportunities.”
Stewart and senior Michael Hall have formed a strong 1-2 point guard tandem, the latter averaging just under seven points, which includes a 21-point effort against Valley Stream Central on Dec. 15. Senior Cadeem Ramsey has contributed offensively and on the boards and junior JV callups Jaylen Brown and Joshua Petion are both averaging better than eight points a game.