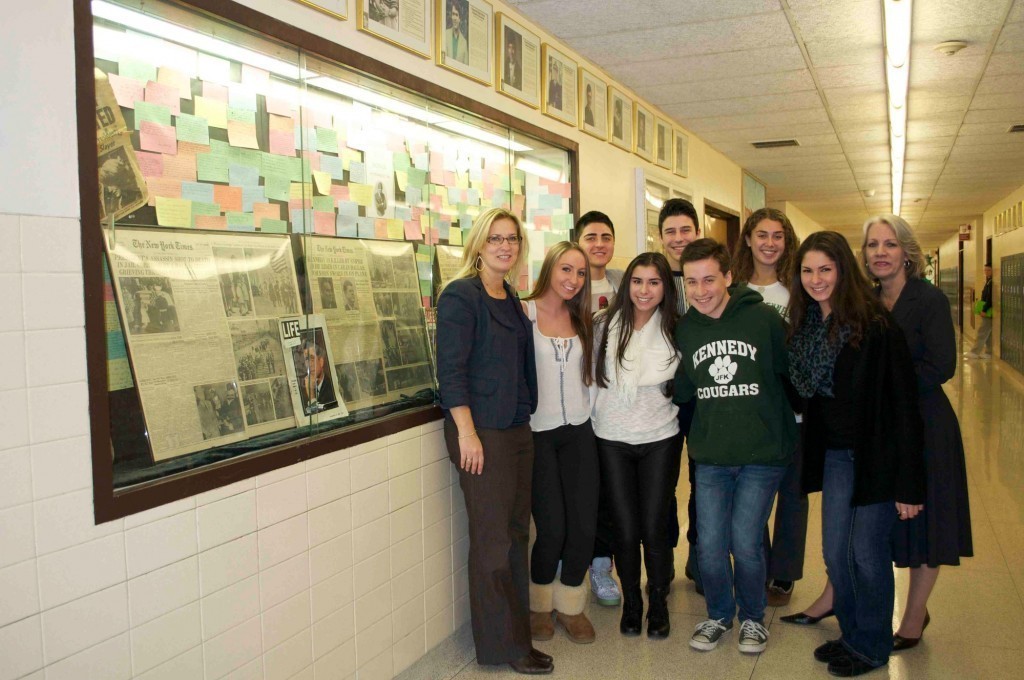 Seniors in teachers Lisa Scherer and Brian Seidman’s “Participation in Government” class volunteered on Nov. 23 with the New York Says Thank You Foundation to help rebuild a New York City firefighter’s Massapequa home, which Hurricane Sandy destroyed. The project took inspiration from Kennedy’s emphasis on service to the nation. Scherer and Seidman’s class focuses on meaningful dialogues about active citizenship.

“It’s important to think about what [Kennedy] stood for as a president,” said senior Olivia Johansen. “It’s also important that we give back to our society. We have family members who were greatly impacted by him, so it’s great that our generation can do something to honor him.”

Each day last week, a Kennedy quote about service, community or government was part of the morning announcements at Kennedy High School. Students also made a “memory board” that included newspaper and magazine clippings related to Kennedy. The social studies department distributed index cards to students and had them talk to parents, grandparents or someone else who remembered Nov. 22, 1963, the day Kennedy was assassinated. The cards were also included on the memory board.

“It’s very important for us to do this memory board because 1963 was a pivotal year in changing America,” said social studies chairwoman Karen McGuinness. “It was, as most historians say, the end of innocence, and it is important for students at Kennedy High School to really understand the message of President Kennedy — service to country and, with the Peace Corps, extending that internationally. With all of the experiences Bellmore-Merrick has had with Superstorm Sandy, now is our time to give back. It really honors the message of President Kennedy.”