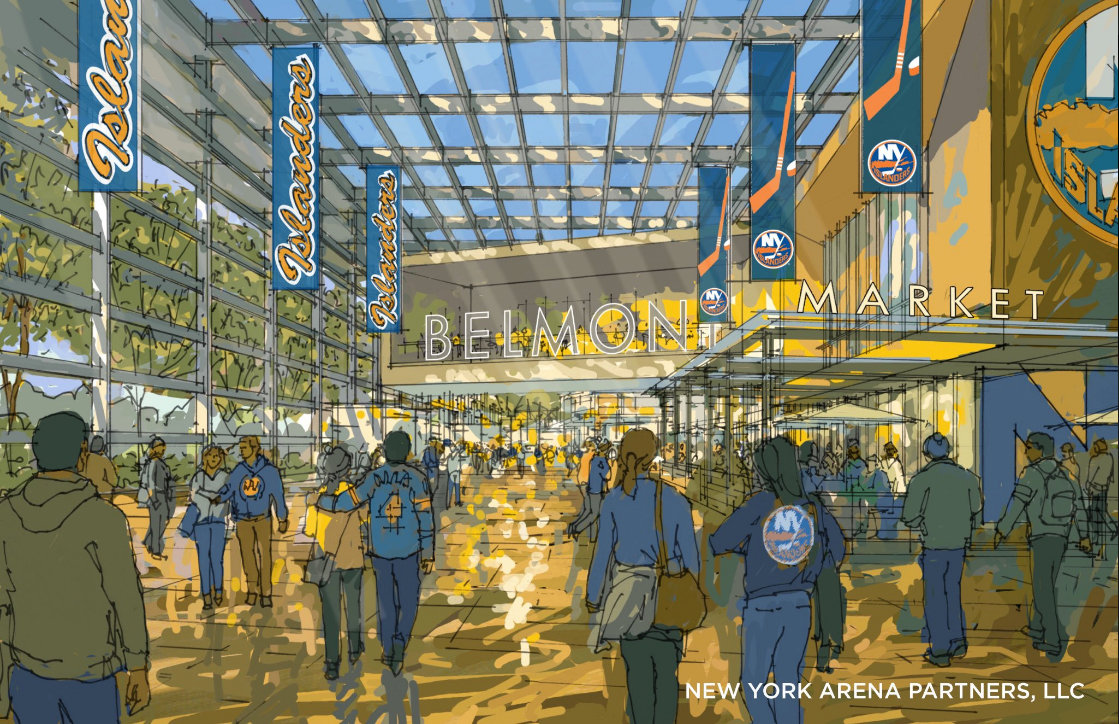 The success of the proposed Belmont hockey arena has been tied to whether developers can secure a full-time Long Island Rail Road station at Belmont.
Courtesy New York Arena Partners 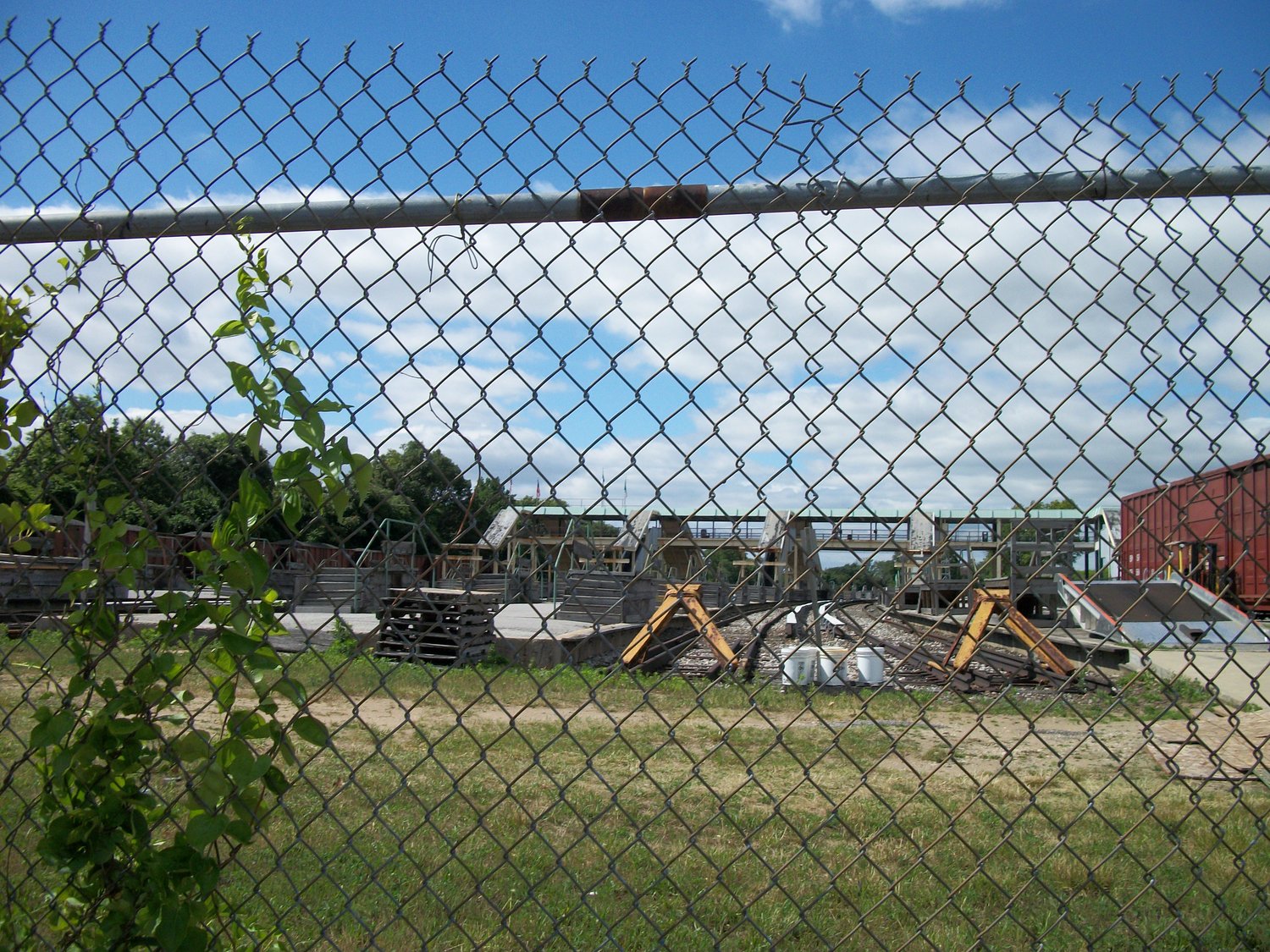 The shuttered Belmont LIRR station, seen from the Cross Island Parkway, is used only on Belmont Stakes Day.
Courtesy Dantd
Previous Next
Upgrades at the LIRR

The Belmont Park train station itself would need much more than a mere face-lift and a splash of paint. “It would need more platforms and additional tracks to handle the kinds of crowds they’re talking about,” said former transportation official Larry Penner, who has more than 30 years of experience in planning and monitoring construction and safety for the region’s railroads. “The original plan to redevelop the facility wasn’t even supposed to be completed until 2032,” Penner said, and neither the specifics of any current plan nor estimates of the upgrade’s costs have been made public.

Part of the difficulty is that reconstruction of the Belmont station depends, in part, on the outcome of other projects. “Those trains have to come from somewhere,” Penner said. “Penn Station doesn’t have the platform space or the tracks” to handle any significant increase in riders, to say nothing of the cost. “Just to give an idea: The smallest part of the equation is the need for additional cars,” at nearly $3 million each, he said. To meet the need of all the projects in the pipeline, “you’d need at least 200 of them.”

In the works, Penner added, are upgrades to the Ronkonkoma and Hicksville lines that “will cost more than $2.5 billion and won’t be finished until 2022, at the earliest. Altogether, “[Governor] Cuomo has promised infrastructure improvements that would cost at least $100 billion, if he built them all.”

Last January, the Herald printed a two-part series on the dilapidated Long Island Rail Road Station at Belmont, and the need for a new, year-round station in the proposed Belmont arena project. More than a year later, the prospect for a full-time station at Belmont is still up in the air, despite the insistence of the arena developers and the Islanders that construction of the arena would begin in the spring.

While Empire State Development officials announced that they had secured two trains for events at the arena, which would run from Jamaica to Belmont, local residents and officials have said the service would fall far short of the promised full-time station that Gov. Andrew Cuomo touted when he initially announced the arena project in 2017.

The Nassau County Village Officials Association became the latest group to demand that developers construct a full-time station. On Feb. 1, the association unanimously voted to send a letter to ESD about the issue.

“…The Association is in agreement that if the development project is approved,” NCVOA Executive Director Ralph Kreitzman wrote, “such approval be conditioned on and require that the current rail station be transformed into a full-service train station, and that the developer be required to bear and pay all costs associated with the upgrade of the station, without the expenditure of public resources.”

Tony Bhatti, of the Elmont Against the Megamall organization, praised the NCVOA for its support of a year-round station at Belmont. Bhatti has expressed concern about traffic that the arena and retail village would generate in Elmont and Valley Stream. According to the project’s draft environmental impact study, the nearly 19,000-seat arena at Belmont would bring more than 4,000 additional drivers during afternoon peak hours on weekdays and weekends on local roads and parkways.

Other residents and local elected officials said they had hoped train service at the Belmont station would mitigate the traffic, but the two trains that developers say they have secured can only accommodate up to 2,280 arena riders for weekday events and 1,330 for Saturday events. If the Islanders’ first game attendance at Belmont mimicked the nearly 14,000 that came for their return to Nassau Coliseum on Dec. 1, less than a 10th of fans would be able to reach Belmont by train, with the rest having to drive through Queens, Elmont and Floral Park.

“This project will divert traffic off the Cross Island and the LIE onto local streets north, south, east and west of the racetrack as drivers look to escape traffic jams,” Bhatti said. “That’s why they are calling for a full-time train station, which must be built at the same time as any arena or megamall.”

Local officials who have not rejected the proposed arena have repeatedly explained that their support of the project was contingent on whether a full-time station were secured. State Sen. Todd Kaminsky and Nassau County Legislator Carrié Solages said their constituents have asked them for years to secure a year-round station at Belmont.

“I was there when the governor and developers promised a 24/7 station at Belmont,” Kaminsky said. “Having a full-time station in Elmont with service in both directions would alleviate major congestion and give residents access to their own station that they have long deserved.”

Solages added that he met with ESD officials in January, and they have yet to complete a comprehensive survey of LIRR riders in the local communities. He was also worried about the “significant adverse impacts” that the arena would have on local buses, which were outlined in the arena’s draft impact study.

Local resident Jon Johnson expressed a different frustration about linking the station with the arena project. Johnson supports the arena project and argued that it was unfair of elected leaders to use a full-time station as a bargaining chip after years of failing to deliver on one for Elmont.

“Our politicians should be fighting to make the station a thing, regardless of the Belmont arena,” Johnson said. “We shouldn’t be left driving to Valley Stream or Queens to take the LIRR.”

Mark Fishbein, a long-time Islanders fan and Bayville resident, said the station was needed for future Belmont employees to use for their daily commutes. He added that as a former Queens resident, he knew about traffic jams on Hempstead Avenue, and warned that the projected traffic might chase away potential shoppers from the arena’s planned retail village.

ESD and MTA officials have yet to confirm if a full-time station at Belmont would be constructed by the arena’s opening day in 2021. ESD officials added that they are in talks with the MTA about securing additional trains for events.