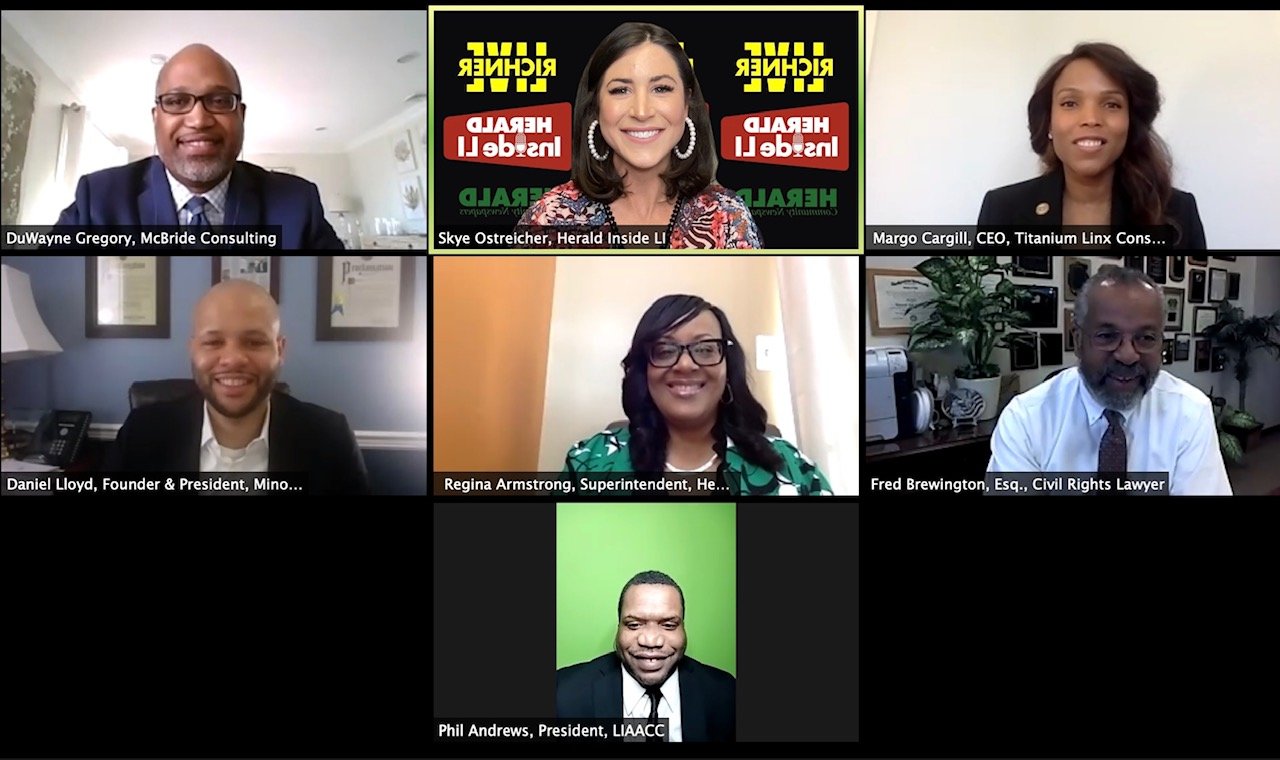 We didn’t want young people sitting outside on an opportunity.”
Phil Andrews, African American Chamber of Commerce
By Andrew Garcia

In celebration of Black History Month, Black leaders on Long Island gathered for the latest webinar of Herald Inside LI on Feb. 25.

Lloyd, the youngest  member of and only millennial on the panel, emphasized the importance that his and younger generations will play in advancing social justice in United States

“The millennial and generation Z demographics are the largest, most educated and most diverse in the nation,” Lloyd said. “What we’re seeing is that millennials and gen Z are understanding what justice is — the idea of a quality life and fairness.”

“As a superintendent of a school district, we see how people can look at us as a school district when we’re failing, they’re quick to talk about it and advertise it,” Armstrong said, “but when we are experiencing successes, no one wants to share it or they begin to criticize the progress being made and say, ‘That can’t be possible.’”

“That hard work that they’re putting in is not being recognized by people on the outside,” Armstrong continued. “It makes them feel as though they are less than.”

The Hempstead School District makes it a goal to show students a wide variety of career opportunities so they understand what is possible — whether it’s a store worker or the owner of the business.

“We know that the failure of America — and Long Island in itself — is not allowing the full story to be told,” Brewington said. “The importance of being there not only as a role model but also as a resource, so that the wonderful education that is being taken on by millennials and gen X is not wasted in regard to getting caught in the same mistakes and the same history that has pulled people down.”

“One of the big lacks is that we don’t have enough mentorship opportunities,” Cargill said. “We can give them that guidance and that direction so they can avoid those pitfalls.”

As the vice president of the Nassau Council of Chamber of Commerce, Cargill understands  the perspectives and practices of other communities. By relaying this information to her own community, people there can adopt beneficial practices, too.

“It’s about information and sharing that information, and being a mentor,” Cargill said. “It’s about being part of an ecosystem that’s larger than just the majority-minority communities.”

Andrews helped develop a young membership program for the Long Island African American Chamber of Commerce in which young people can meet with business owners and receive free training.

“We didn’t want young people sitting outside on an opportunity like this,” Andrews said. “We have to be at the table; we have to be involved. When we have a seat at the table, we can bring something away. We can’t sit back on these things. . . We have to be examples.”

“You can’t buy wisdom,” Lloyd said, referring to the need for mentorship on Long Island. Minority Millennials helps invigorate young members’ business dreams by allowing them to share the personal stories behind their business ideas.

“We, as a people, need to understand where that information is flowing and not just confine ourselves to what we like or what’s comfortable for us,” Cargill said. “Step outside the box and stay curious, because as you stay curious, that’s where you’ll find your niche and your next big idea.”

This episode was sponsored by McBride Consulting & Business Development Group and the Rockville Centre Coalition for Youth. This and all previous episodes of Herald Inside LI can be found at liherald.com/recordings.