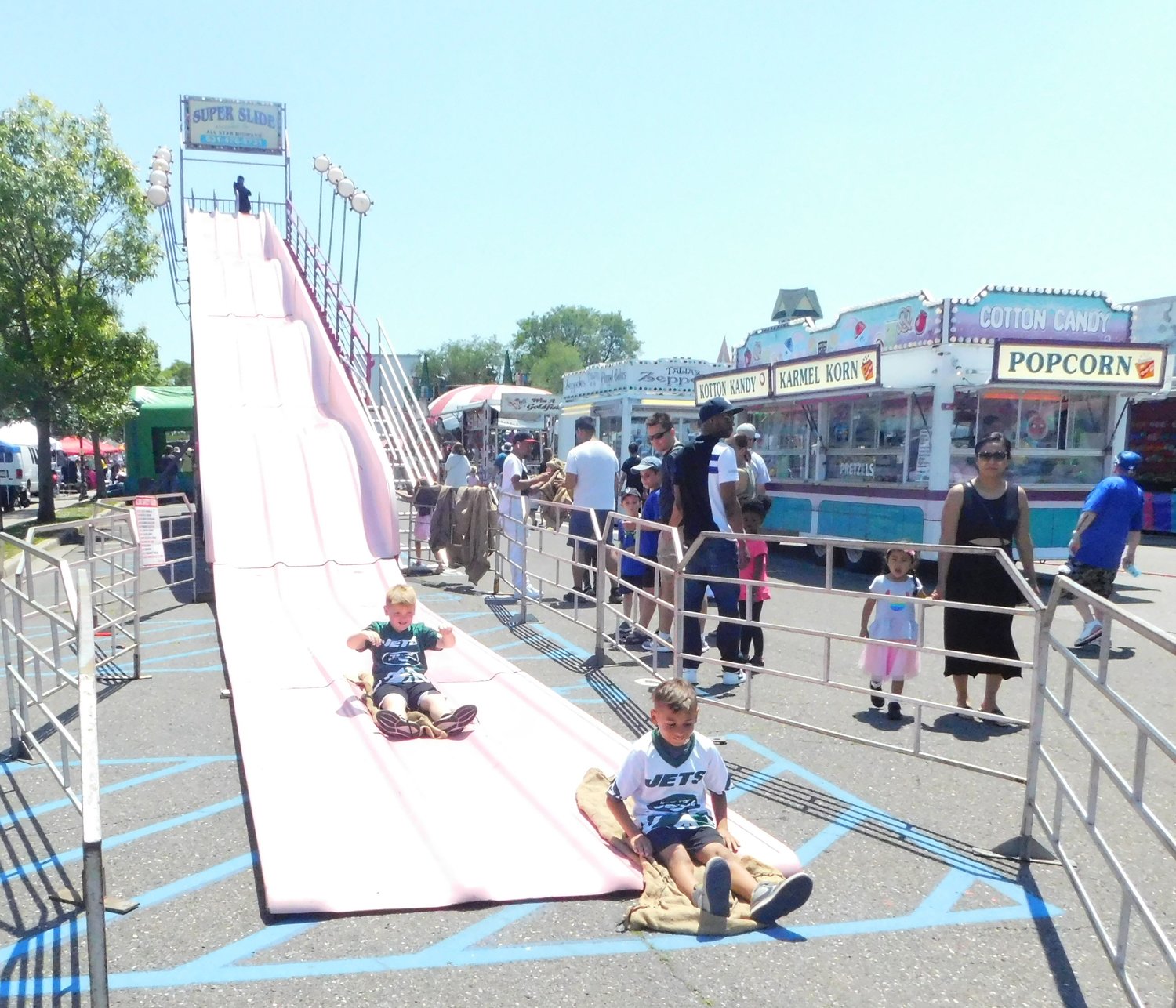 Families lined up for a fast ride down a high slide at the Nautical Mile Festival last Saturday, June 4.
Reine Bethany/Herald 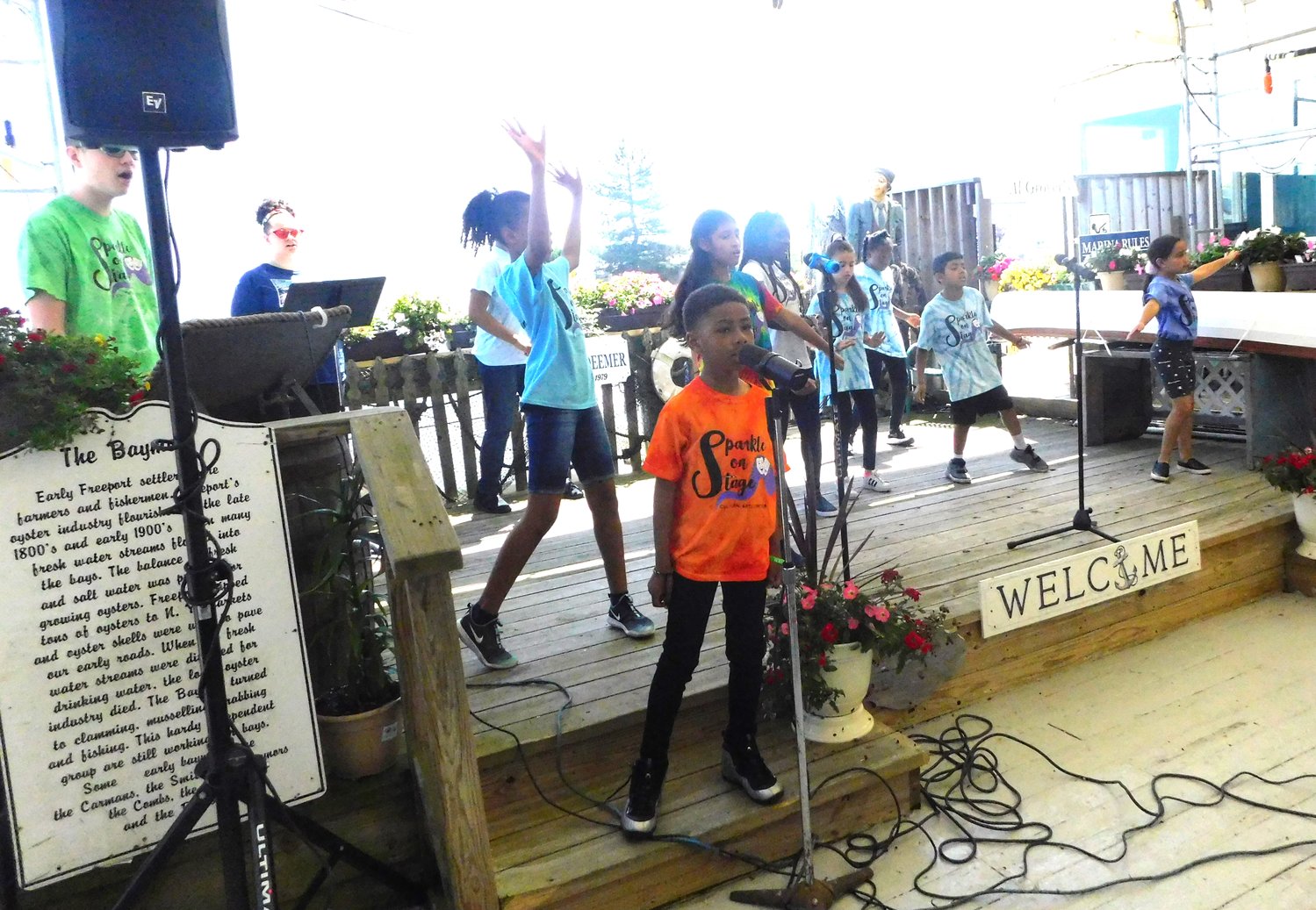 At the 32nd Annual Nautical Mile Festival, Sparkle on Stage, Freeport's youth theater group, sang and danced in the space next to their new home on Woodcleft Avenue.
Reine Bethany/Herald 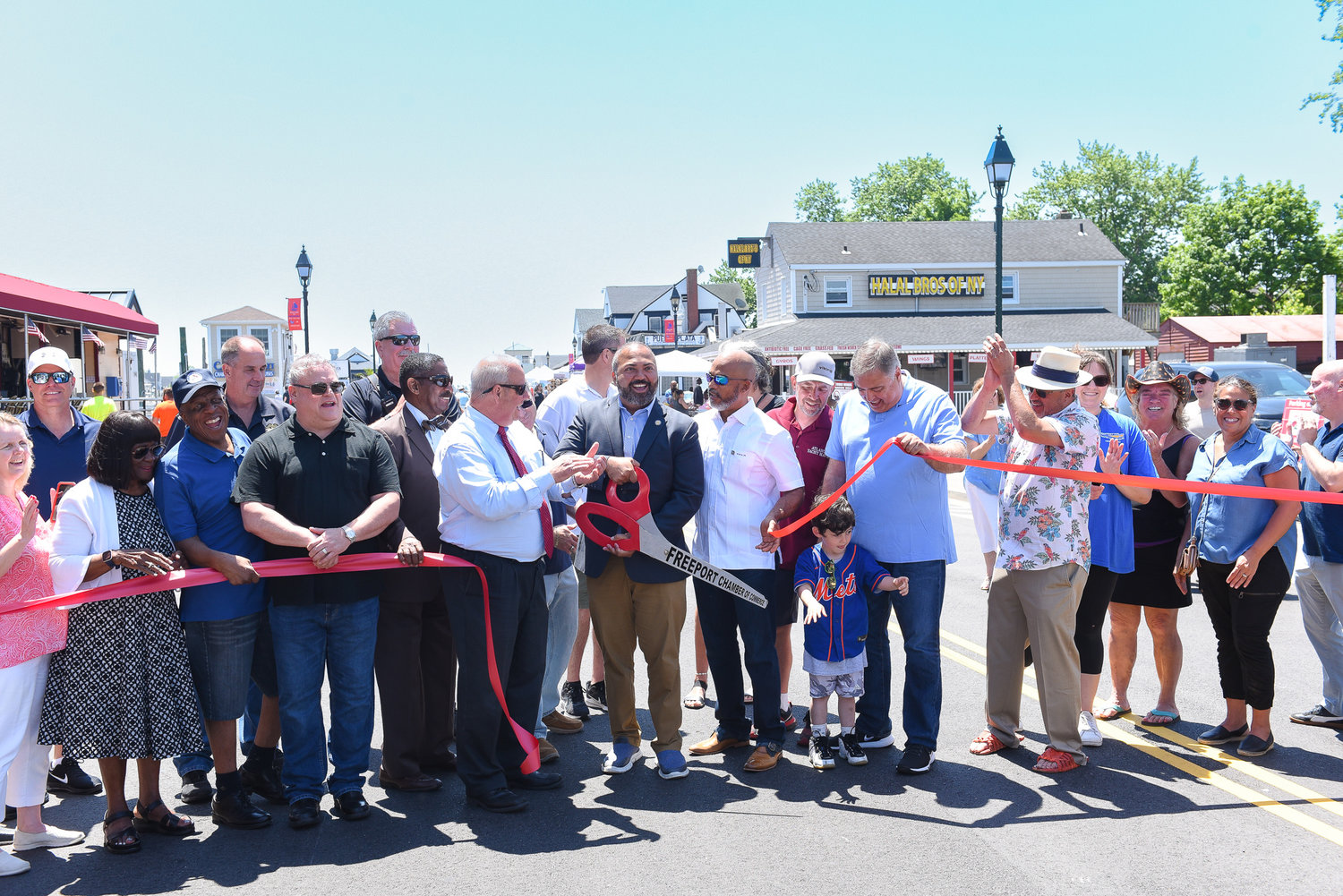 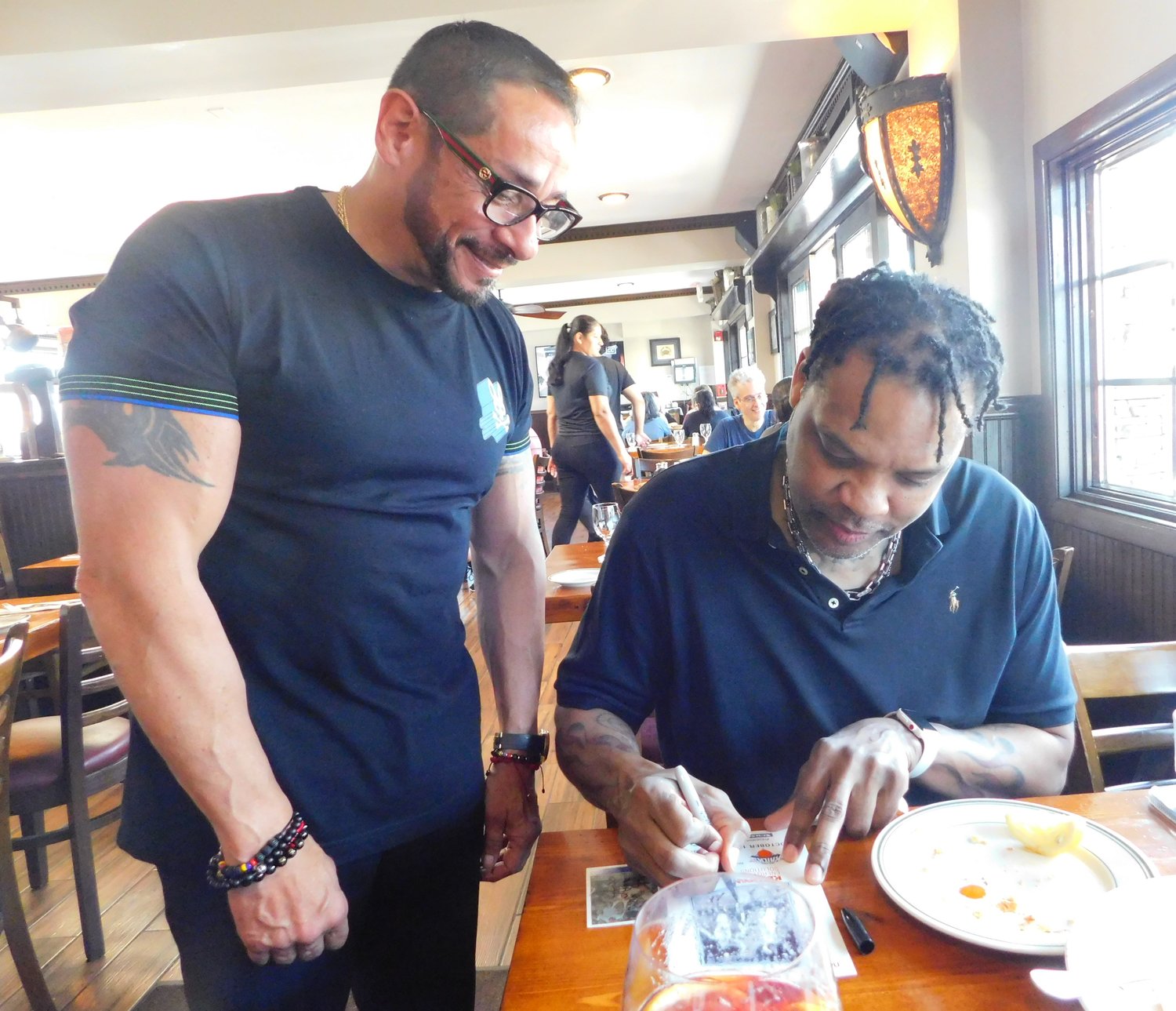 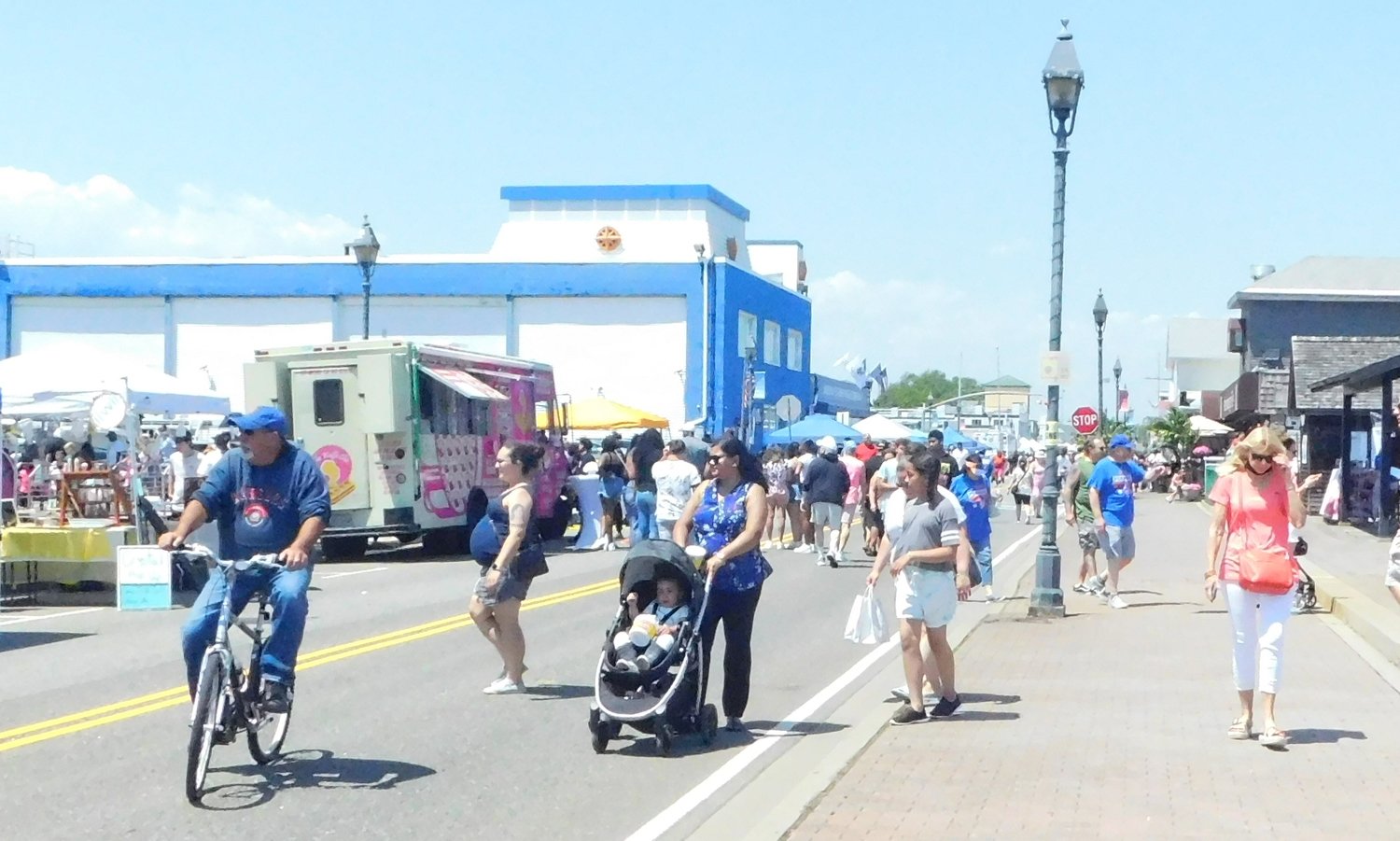 Gentle sun and sunny breezes encouraged Freeporters to come out for the 32nd Annual Nautical Mile Festival on June 4.
Reine Bethany/Herald
Previous Next
By Reine Bethany

The 32nd annual Nautical Mile Festival last Saturday was an event that stimulated all the senses for the many who came out to enjoy it.

It was sunny, but not hot. Breezy but gentle. Vendors were selling unique creations. There was curbside music, outdoor drama and inside dining. Wafting deliciously through the air were fragrances of corn dogs, sweet waffles, Philly cheese steaks and fried calamari.

“We have over 80 vendors,” Recreation Center Director Vicki Dinielli said, speaking at the noon kickoff for the event in front of Hibiscus on the Mile. “I think this festival’s going to be one of the best we’ve had in many years.”

“I put in a bill up in Albany the other day and I asked for good weather,” joked Mayor Robert Kennedy. “Both houses approved it!”

“Freeport, let me hear it! Long Island is back!” Thomas said to residents who gathered around. “I’ll be representing Freeport, and I am so happy to be here, to have a partner like Mayor Kennedy here. We’re going to make this one of the best festivals on Long Island.”

Several vendors were either based in Freeport or had strong Freeport ties.

“It’s nice to be back in my hometown,” said Raquel Rodriguez, 52, who was born and raised in Freeport but now lives in Oceanside. Her business, Green Lotus, sells tasteful candles and accessory jewelry through Instagram and Facebook. “This is my first Nautical Mile festival. The weather is gorgeous.”

Under a blue canopy, Joseph and Katie Frumento did a brisk business selling Katie’s self-designed cups, shirts, and personalized gifts. “We moved into Freeport almost five years ago,” said Katie, who is 32. “We bought our first home here on Sterling Avenue. Freeport’s a great town.”

A few vendors down, Zakiya Cush, of the Stearns Park neighborhood of Freeport, presided over decorative china platters loaded with a variety of cookies, delicately frosted cake pops, rectangular cakes, and muffins. Her business is called Grand-Mére, which is French for grandmother, in honor of the distinctive cuisines she developed from her mother and her Guyanese grandmother.

“During the pandemic,” said Cush, “we saw that there was a need for treats and goodness and I thought, hey, why not start a business to fill that need? And since no one could really go out, I just developed our e-commerce and decided to ship everywhere.”

From a rented space at A La Carte, a commercial kitchen in Lynbrook, Cush and her team ship cookies, cakes, pies, and their own ground coffee nationwide.

As villagers gathered around her cabana, Freeporter Cathy Ford could barely keep up with the demand for her bottles of Total Hot Sauce—Red Garlic, Pharaoh’s Pepper, Mango Habanero.

“We started early in 2020, and stopped for a while when the pandemic shut everything down,” Ford said.“Now you can go to our website online, or find us on Facebook and Instagram, but we do have a physical space in the village. I love engaging with people.”

“We did pretty well at the festival,” Rednael said. “We didn’t sell out, but we didn’t go home empty-handed, either.”

George Schultze, yet another Freeporter, stood under his canopy, surrounded by djembe drums, brightly designed djembe bags, and plaques with spiritual symbols. His business is called Spirit Sky Drum.

“I do workshops all year, all over Long Island and New Jersey, at libraries, assisted living, nursery homes, teens, school kids,” Schultze said. “I give private lessons and build drums.”

The established businesses did well that day, including the River House Grille, where 6-foot-5-inch former NBA star Latrell Sprewell towered above customers lining up to get his autograph.

Freeport’s own youth theater group, Sparkle on Stage, celebrated its grand opening. Director Robyn Workman has realized the dream of having a permanent space for her group at last.

She and her young crew, with the help of parents and the members of the Long Island Arts Council at Freeport, set up their roomy indoors with Sparkle on Stage t-shirts on racks as well as a nicely equipped performing space.

But the lovely weather allowed them to perform outdoors that morning, next to their new home, in the space loosely termed The Grove. The young performers confidently sang and danced their way through songs from the 1990 musical “Once on This Island,” by Lynn Ahrens and Stephen Flaherty. As their voices sailed through the sound system, passers-by stopped to listen and watch.

Perhaps, as Vicki Dinielli said, it really was one of the best Nautical Mile Festivals in years. Without question, it was a restorative day where Freeporters renewed the activities that make their village special.