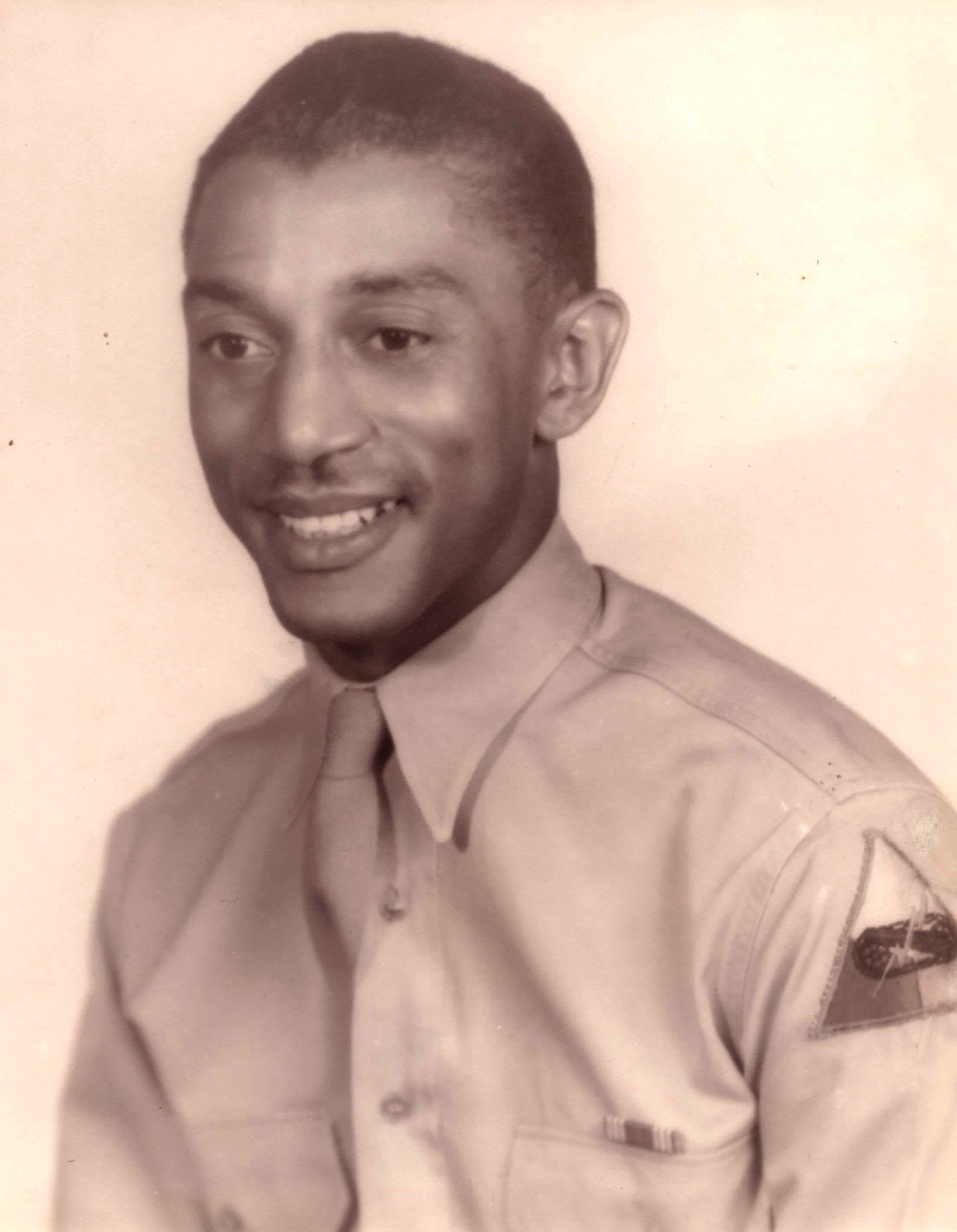 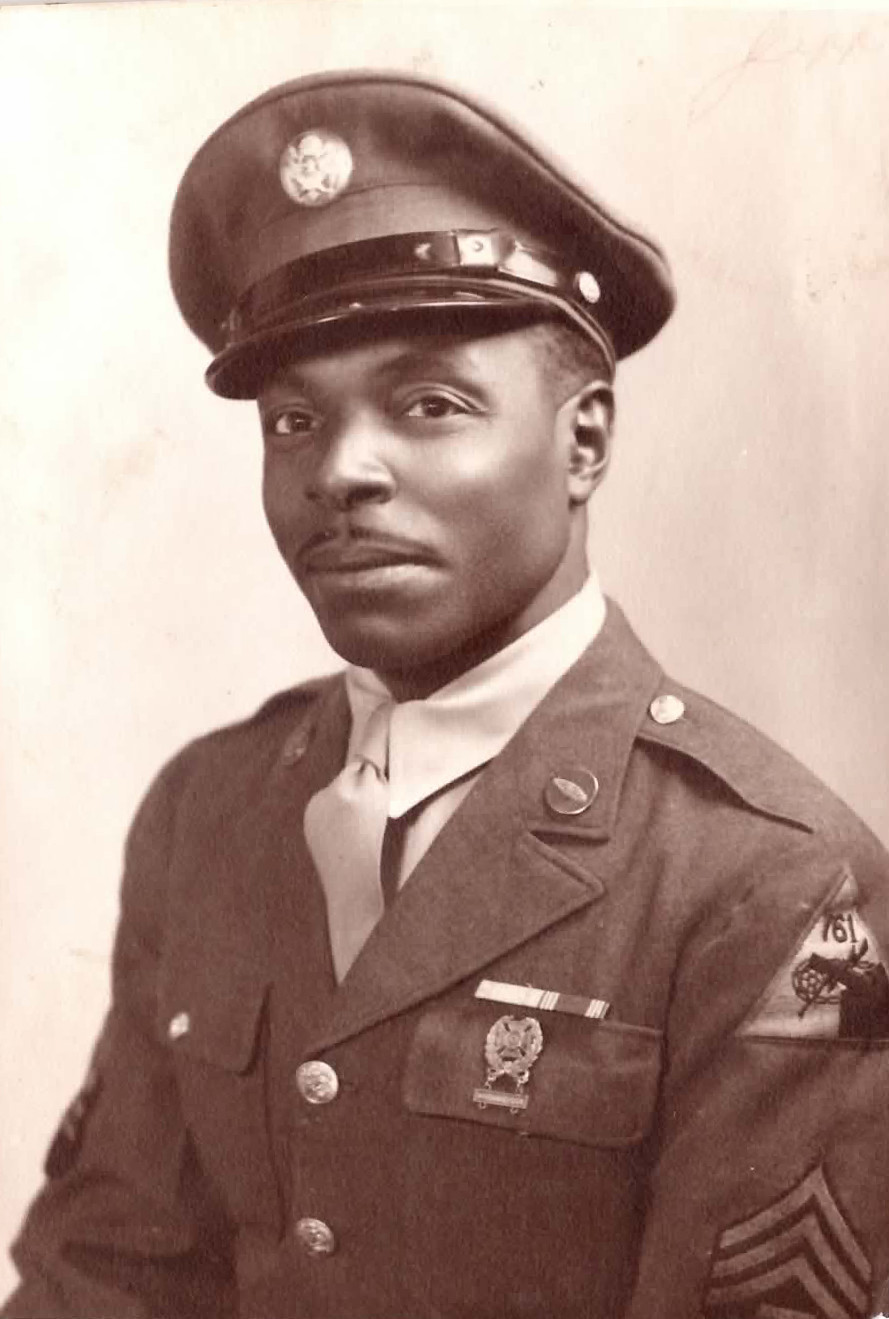 Jeff Burns Sr. was a member of the 761st Tank Battalion during World War II and lived in Inwood.
Courtesy Peninsula Public Library 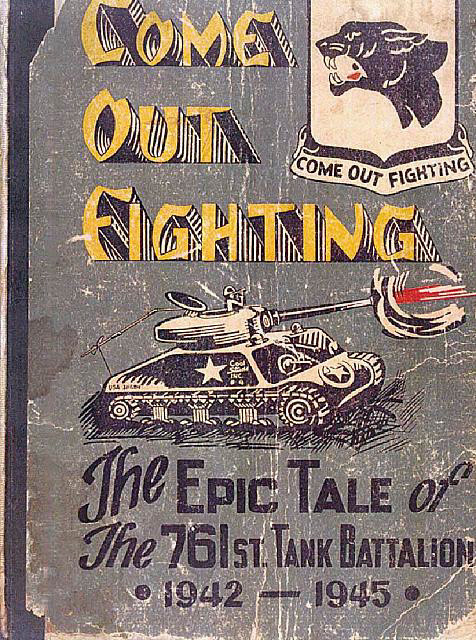 “Come Out Fighting” recalls the men of the 761st Tank Battalion. It was written by battalion members and the Allied Veterans Association.
www.761st.com
Previous Next
Noteworthy African-American military units

World War I: Harlem Hellfighters, also known as the 369th Infantry – 171 members fought in the war for six months and about 70 percent of the men were originally from Harlem. They were the first African-American unit to fight in combat during World War I.

World War II: Tuskegee Airmen, formed in 1941 and included African-American men who were trained to fly and maintain combat planes. The 761st Tank Battalion, organized in 1942, was the first African-American armored unit to engage in combat. The 452nd Anti-Aircraft Artillery also served in World War II.

The Tuskegee Airmen may be the most famous all-black military unit that fought in World War II, but the 761st Tank Battalion was the first African-American armored unit to engage in combat.

Charles Percy Ashby, 98, who grew up on Walcott Avenue in Inwood and still lives there, was a member of the 761st Battalion. The unit’s history was documented in “Liberators: Fighting on Two Fronts in WWII,” which will be shown at the Peninsula Public Library, at 280 Central Ave. in Lawrence, on Feb. 15 at 6:30 p.m.

Denzel Washington narrated the 90-minute documentary, made in 1992. It was nominated for an Academy Award for best documentary the following year. A book of the same title was written by Lou Potter, William Miles and Nina Rosenblum and published in 1992, describes the soldiers’ experiences fighting in France, Belgium and Germany and the liberation of the Buchenwald and Dachau concentration camps.

Ashby said he was drafted by mistake because he was initially considered physically unfit for military duty. But he insisted on remaining with the 761st Battalion. “Before the unit headed to Europe, Ashby said, he taught several members how to read and write in their spare time. The men came from across the U.S., and had varying levels of education.

Known as the Black Panthers because of the leopard on their insignia and their motto, “Come Out Fighting,” battalion members and the Allied Veterans Association joined forces to write a book about the unit, with the motto as the title.

The unit’s most notable member was 2nd Lt. Jackie Robinson, who was assigned to Camp Hood in early 1944, three years before he became the first black man to play major league baseball and six years before the camp was renamed Fort Hood.

“They faced a lot of perils and a lot of scrutiny, but they overcame it,” said Jeff Burns Jr., who will make a presentation before the film at the Peninsula Library.
Burns’s father, Jeff Burns Sr., who was originally from Georgia, was a member of the battalion. He left to fight with Ashby and returned to Inwood with him in 1945. Burns Sr. died in 1988.

Janet Schneider, Peninsula’s adult programming librarian, said that Black History Month is an opportune time to feature a film about the 761st, describing the unit as “one of the heroic African-American battalions which were fighting on two fronts in World War II — battling discrimination at home as they fought for their country overseas.”

After the war, Ashby had a varied career that included additional military service at Mitchel Field and work in the financial industry. He is a former board member of the Five Towns Community Center in Lawrence, and an active member of the Bethel AME Church in Far Rockaway.

“We proved them wrong,” Ashby said, referring to the prejudice that African- American soldiers experienced at the time. “We were good for anything.”
Ashby earned the Bronze Star for “Meritorious Achievement Against the Enemy.”

The entire unit was awarded the Presidential Unit Citation, one of the highest honors that a combat unit can receive for heroism, by President Jimmy Carter in 1978.