Civilians learn how to take down a shooter 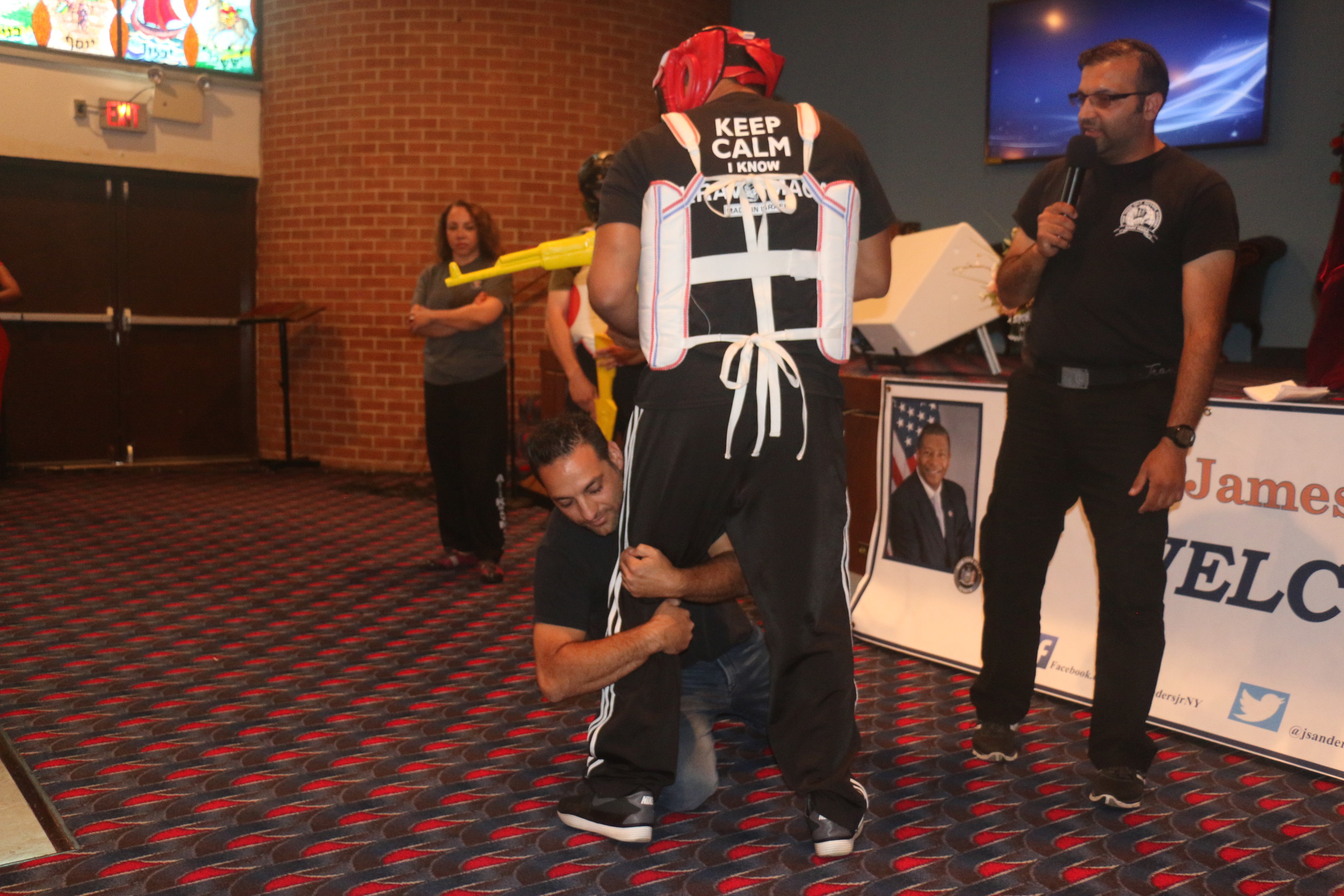 Instructor Avi Avramcheyiv, right, explained how to take down a gunman by leading with the shoulder and rolling into their leg.
Micah Danney/Herald 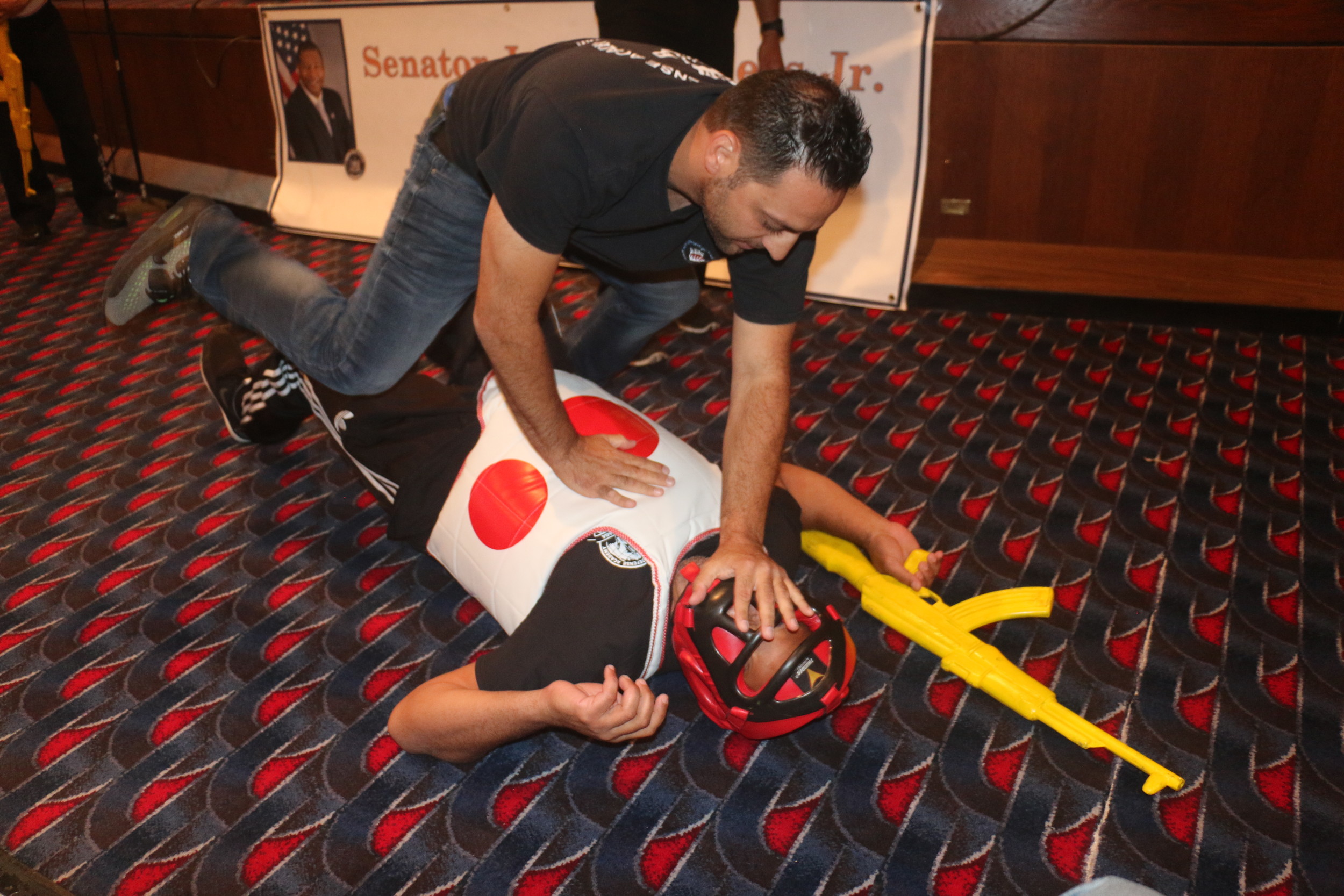 A demonstrator showed how to use a palm strike to the face to disorient a shooter before grabbing their gun.
Micah Danney/Herald 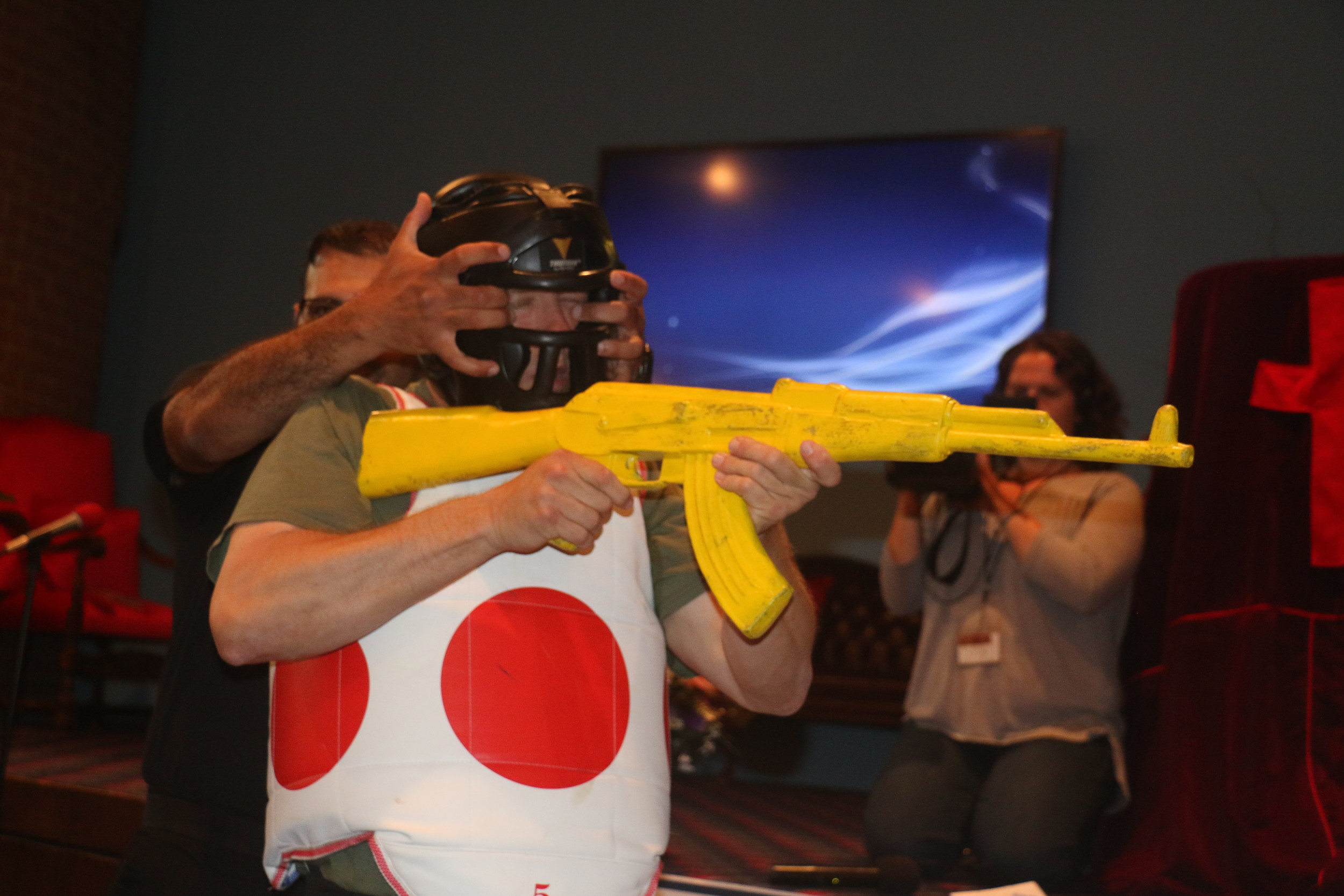 Avramcheyiv showed how to control a shooter’s head from behind by sticking fingers into their eye sockets.
Micah Danney/Herald
Previous Next
By Micah Danney

About thirty people watched a hand-to-hand combat instructor demonstrate how to take down an active shooter at a church in Jamaica, Queens on July 14. The event was organized by State Sen. James Sanders Jr., whose district borders Valley Stream.

The demonstration was led by Avi Avramcheyiv, a former Israeli soldier and the founder and chief instructor of the New York Self Defense Academy, in Flushing. Avramcheyiv teaches a martial art called Krav Maga, a style of hand-to-hand combat developed by the Israel Defense Forces that draws from several disciplines.

The instructor explained that the first rule of survival during an attack is to escape the area, but that should only be done if it can be accomplished within 30 seconds. “This time unit is very important,” he said, adding that hiding is the next best option if a quick escape can’t be made. The ideal hiding place can be locked from the inside.

“Shooters don’t want to waste time,” Avramcheyiv said. “They want to kill as many people as possible.”

He told his audience to stay low while hiding to avoid being at eye level — and gun level — with a gunman, and to call police once in a safe place.

In the absence of police, Avramcheyiv explained that ammunition clips only hold up to 30 rounds, making the pause during reloading an opportunity to stop the shooter. “When you hear there is no more bullets, it is time to act,” he said.

Avramcheyiv said that potential victims should cower and act scared to give an attacker the impression that the attacker is in control. When an opportunity presents itself, he said, “it is important to be very aggressive” when attacking them. As he spoke, two instructors demonstrated how to take a shooter to the ground by crouching at their feet, grabbing one leg and rolling forward into the inside of the leg, forcing the person to the ground. Once the instructor playing the shooter was on his back, the other quickly struck the groin with several strikes of his palm and followed with several more to the face, then grabbed the gun, butted the shooter in the face and pretended to shoot him in the head.

Avramcheyiv pulled Faith Hill, 72, from the audience. Hill executed the rolling take-down technique and the instructor went down as quickly as he did when his fellow instructor did it.

Avramcheyiv told the audience members to go for an attacker’s head first. “Once you control the head, the body follows,” he said, grabbing an instructor by the face guard and yanking his head back, with his fingers jammed into where the eye sockets would be.

Besides the head, Avramcheyiv said to attack weak points like the groin, throat and knees, where there are no protective muscles. He also noted the area of the ears, to which a strike can render a person without equilibrium. “If he cannot stand or breathe,” Avramcheyiv said, “He cannot fight.”