Police use social networking to look into 1984 Lynbrook case 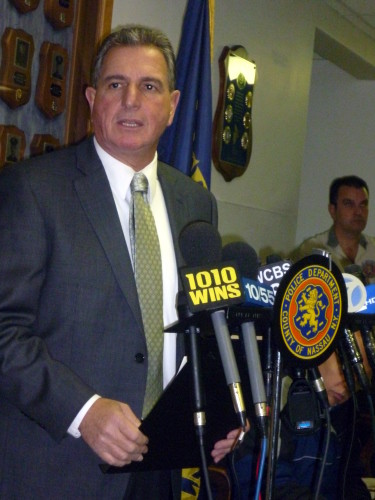 John Azzata, Det. Lt. of the Nassau County Police Department Homicide Squad said that police are looking into comments made about Morrissey and two other young local women, Theresa Fusco and Jackie Martarella, who were reported missing before being found murdered around the same time.
Clarissa Hamlin/Herald 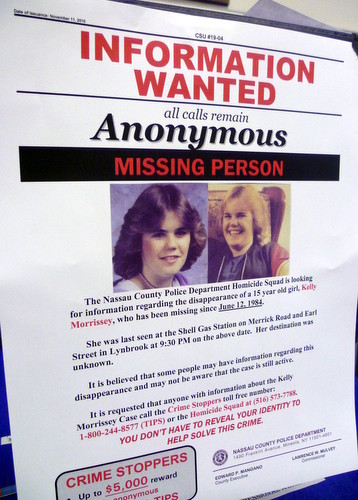 The Nassau County Police Department Homicide Squad hopes to solve a 26-year-old mystery surrounding the disappearance of Kelly Morrissey, a Lynbrook girl who has been missing since June 1984. Morrissey, who was 15 when she vanished, was mentioned in a discussion on a Facebook page recently, according to police.

The Facebook page of Hot Skates, a roller rink in Lynbrook, is set up with a discussion link, “Back in the Day,” for people to reminisce about their experiences working at or visiting the rink, said John Azzata, Detective Lt. of the Homicide Squad. Police are looking into comments made about Morrissey and two other local young women, Theresa Fusco and Jackie Martarella, who were reported missing before being found murdered around the same time.

Morrissey’s parents were in contact with the NCPD as recently as Nov. 10, police said. Iris Olmstead, Morrissey’s mother, said that she is not familiar with Facebook. “I think it is strange that after 26 years, people are making comments on a website,” she said. “We always hoped she will return, but after 26 years, I tend to doubt that she’s still alive. I know she didn’t run away, but somebody out there has to know what happened.”

“During these conversations back and forth, the topic became the missing girls in Lynbrook, and that gave us the opportunity to open up some dialogue and find out if anybody knew anything,” Azzata said at a press conference on Nov. 11. “At this particular point, we do not have any specifics off of that Facebook page, but because of the interests of these people in the Lynbrook area who visited Hot Skates, we were hoping that other people who may not think they know something about the disappearance of Kelly might have some tangible evidence that might help us.”

Morrissey, who would now be 41 years old, was last seen at the Shell station on Merrick Road and Earle Street in Lynbrook at 9:30 p.m. on June 12, 1984. She had bought a pack of cigarettes and met a girlfriend there. Police said that she told a station attendant that she was heading down the block to Captain Video, which is no longer in business. “There is no indication that she ever made it there,” Azzata said. “The employees were interviewed at that time and no one ever remembers Kelly entering that store.”

At the time, Morrissey had a part-time job, according to police. She had a paycheck waiting the next day, which she never picked up. Police also said that she had laid out her school clothes for the following day.

“There is no indication that Kelly would be a runaway,” Azzata said. “No note was left. It’s hard to fathom that a young girl, 15 years old, would not make contact with anyone she was close with since that time.” Despite his doubts, Azzata said he hopes Morrissey is still alive.

Police say they have not found any direct connection between Morrissey’s disappearance and Fusco’s and Martarella’s murders, which remain unsolved.

A Shell station employee, Bruce Kyriakou, told the Herald that although he didn’t remember much about Morrissey’s disappearance, many former employees were still talking about it when he began working there in 1985.

Police ask anyone with information on the case to call (800) 244-TIPS. A $10,000 reward is being offered for any information that may lead to an arrest and conviction of individuals responsible for Morrissey’s disappearance.