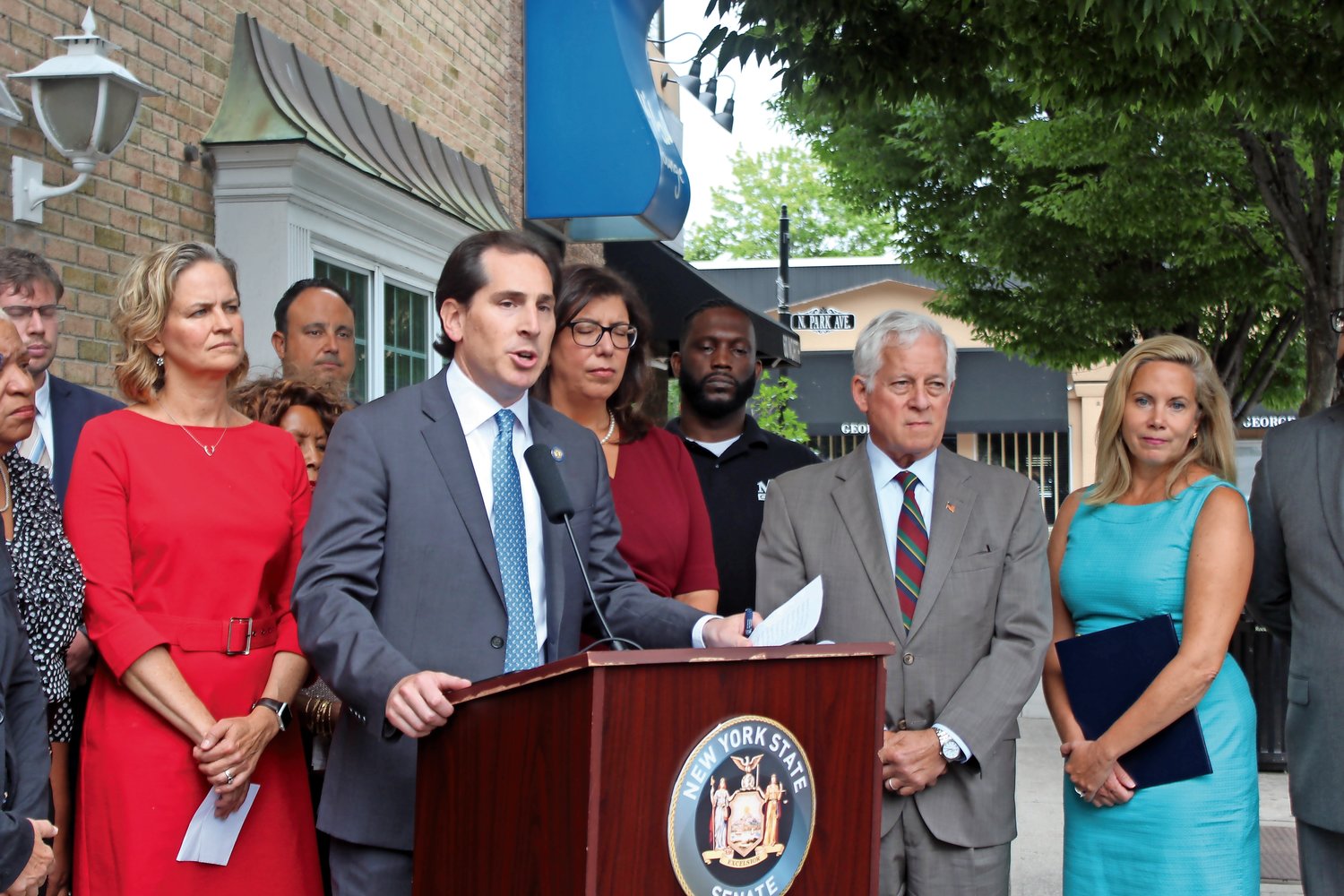 State Sen. Todd Kaminsky, center, and Assemblyman Charles Lavine, right, introduced legislation that would mandate education about the swastika and noose for students in grades six through 12.
Briana Bonfiglio/Herald
By Briana Bonfiglio and Ronny Reyes

Local lawmakers gathered for a news conference in Rockville Centre on Aug. 13 to announce a bill proposed in the State Senate aimed at curbing hate crimes. The measure would direct all middle and high schools in New York state to teach their students about the history of hate symbols like swastikas and nooses.

The proposal came in the wake of an incident in Oyster Bay on Aug. 8, when seven 10-inch swastikas, scrawled in purple marker, were discovered on the walls of the picnic pavilion at Oyster Bay’s Theodore Roosevelt Memorial Park. An investigation into the vandalism is continuing.

State Sen. Todd Kaminsky, a Democrat from Long Beach, wrote the bill and received input from State Assemblyman Charles Lavine, a Democrat from Glen Cove. Lavine said he had worried about the rise of hate crimes over the past five years. Last year, the FBI released a report indicating that there had been a 17 percent spike in such crimes across the U.S. in 2017, continuing a three-year rise. Anti-Semitic hate crimes also rose by 37 percent. There were 7,175 hate crimes reported that year, and FBI officials expect that number to be higher in 2018 and 2019.

“We need to address the pandemic of hatred in our nation,” Lavine said. “My hope is that this bill can help educate our children and send a strong and persuasive message to New York and America that we have a real problem . . . and that problem is white supremacy.”

The bill focuses on educating students about hate symbols and their effects on those they target. While schools are mandated to teach about the Holocaust, there is no requirement that they take on hate symbols. The bill has quickly gained support from Long Island NAACP, the Jewish Community Relations Council, the regional Anti-Defamation League and the Holocaust Memorial and Tolerance Center, all of which sent representatives to speak at last week’s news conference.

Nassau County Executive Laura Curran, who supports the bill, released a statement condemning the incident in Oyster Bay, saying, “We cannot look away from the fact that bigotry, including anti-Semitism is on the rise . . . We will not tolerate it in Nassau, and we certainly will not look the other way.”

Curran was joined at the news conference by several of the bill’s co-sponsors, including Senators Kevin Thomas, Shelley Mayer and Anna Kaplan, as well as Assemblywoman Judy Griffin. Lavine and Kaminsky said that while teens may use symbols of hate to be provocative or controversial, properly educating them about those symbols’ history could change that.

“It is imperative that we educate our children on the repugnant meanings behind the swastika and noose as symbols of bigotry and intolerance,” Kaminsky said. “[It] will go a long way in stamping out these nauseating incidents across our communities, and our state as a whole.”

“Hatred has no place in our communities, and we must work to educate our students on the painful history these symbols of hate represent,” Sen. Jim Gaughran added. “It is through educational efforts that we can work together to create a society free from hate and full with tolerance and peace.”

Assemblyman Mike Montesano, a Republican from Glen Head, said that while he agreed that teaching teens about the history behind the swastika would be helpful in curbing graffiti and the use of the symbol, he believed the history of the noose was too closely associated with the history of executions in the U.S. and should be kept separate. Montesano added that while the earliest the bill could take effect would be the start of the 2020-21 school year, the State Board of Regents or individual schools could act on their own and create courses on hate symbols as soon as September.

“Legislation would create a uniform standard for all schools to follow, but schools can actually start educating their students about the history behind the swastika and its use when classes start next month,” Montesano said. “There’s really no reason to wait for next year.”

Another news conference attendee, Nassau County District Attorney Madeline Singas, explained that there was a program in place in the county to send young people who commit crimes of hate-focused vandalism to counseling, and noted that they come away with a deeper understanding of hate symbols. She praised local officials for taking steps to educate students before they act, and not afterward.

“Most students don’t even know what [these symbols] mean,” Singas said. “While no one may get physically hurt by the drawing of a swastika or a noose, the symbols are demonizing and take away one’s sense of security and freedom.”