Oyster Bay’s Snouder’s to be a meeting place 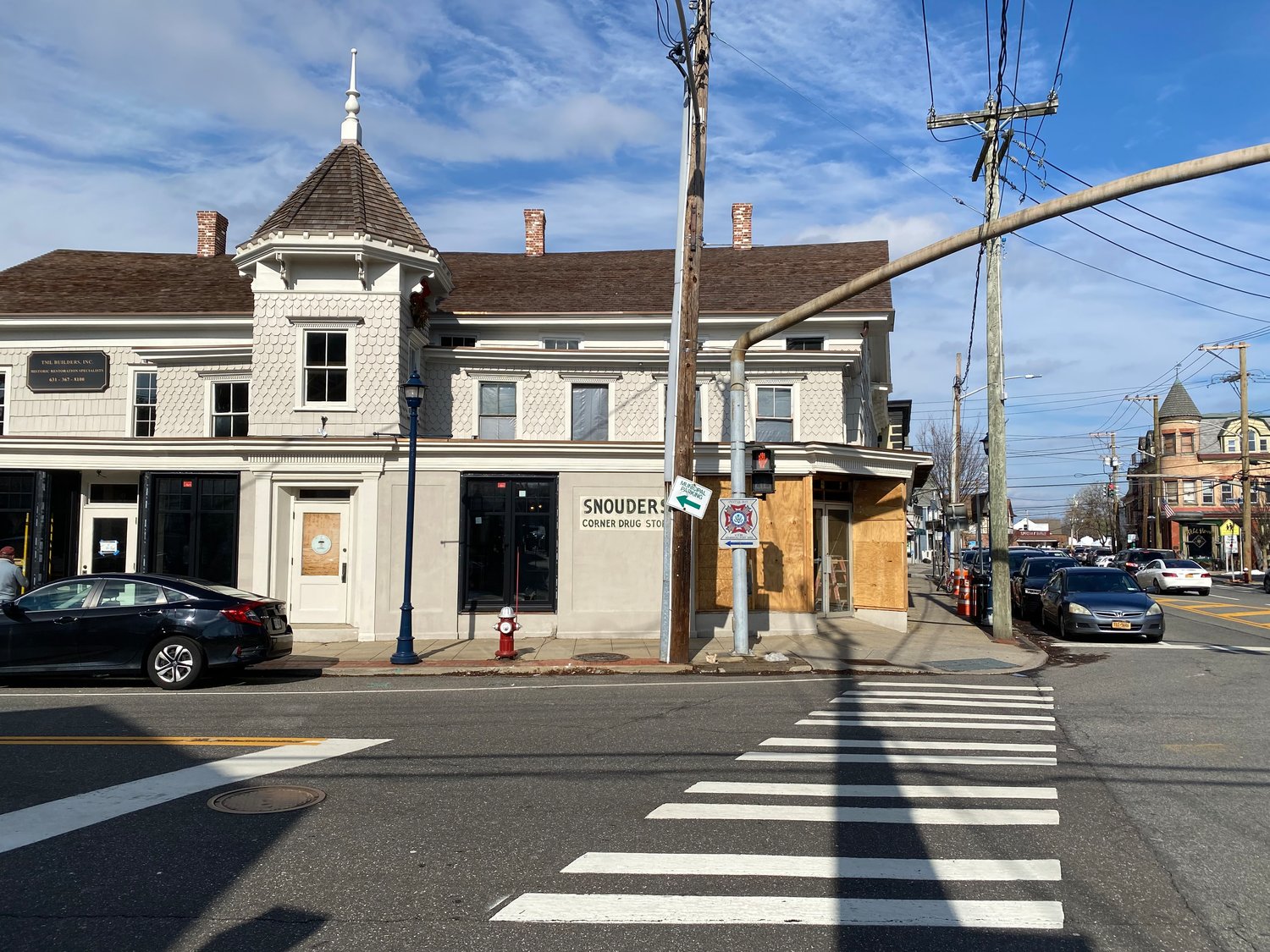 Snouder’s is repairing and reusing many of the original beams, keeping the structure authentic.
Will Sheeline/Herald
By Will Sheeline

The construction going on at Snouder’s Corner Drug Store has been a focus of interest and speculation for Oyster Bay residents for some time. The building, on the corner of South and West streets, has sat vacant for over a decade, but that will change soon, thanks to the work of Tim Lee, president and owner of Lee Construction and Renovations, in Cold Spring Harbor, and Claudia Taglich, owner of the restaurants 2 Spring and Four in Oyster Bay, who bought the drug store in April 2019. Snouder’s, Lee said, will hopefully be reopening this summer.

Snouder’s first opened its doors in 1884, and for the next 126 years it was at the center of life in the hamlet. It boasted the first telephone line in town, installed in 1887. When Theodore Roosevelt vacationed in Oyster Bay as governor and as president, calls from across the country came for him at Snouder’s, and he would ride a horse into town from Sagamore Hill to make calls.

In 1889, a soda fountain was installed at Snouder’s, a classic fixture of the corner drug stores of yesteryear, which made it a popular destination into the 1970s. But by the early 2000s, the store had fallen on hard times, unable to compete with chains like CVS. It finally closed in 2010.

Residents worried in 2017 when Hamid Nazif, a Great Neck businessman, wanted to demolish the building. Two years after he bought it, he hired an architect to evaluate it, and was told that the structure was in poor condition and did not meet local codes. Because repairing it did not appear feasible or cost-effective, the architect recommended that the building be razed.

The news was unpopular among preservationists, residents and Town of Oyster Bay officials, prompting the town’s Landmarks Preservation Commission to hire its own architectural firm, which concluded that the building was worth restoring.

“Oyster Bay has some great, original 18th-19th century architecture,” said John Collins, an architectural historian and a former member of the Landmarks Preservation Commission. “It gives the town a sense of place, of history and community … What Tim and Claudia are doing by renovating Snouder’s is really great for the hamlet.”

Lee said he had always been interested in the Snouder’s building because of its storied history, which he would like to preserve. “I want to bring back the history,” he said. “This was a place people would come and meet. In the ’20s and ’30s, people would come to the soda fountain, to get their newspaper, pick up prescriptions and meet up with others. That’s really what we’re trying to reconstruct here, a meeting place.”

With that in mind, there will be a snack bar at the new Snouder’s. Visitors will be able to sit at the bar, have a beer, a sandwich, a milkshake or a cup of coffee, Lee said. And there will be a stage, too, for live musical performances and magic shows for children. “Something fun for the town,” Lee said. “That’s my goal.”

The renovated building will have two stores on the ground floor and five apartments on the second and third floors. There will be three one-bedroom and two two-bedroom apartments.

Provisions, owned by Taglich, will be located on the ground floor.  Aptly named, it will be a provisions shop. “Basically, we’re going to be selling some of our food from 2 Spring,” she said. ”Everything we serve there is homemade, so you’ll be able to buy things you can pick up for dinner and lunch, or if you’re having a party and you need a tray of cheese or charcuterie, as well as donuts, ham, bread. We’re also selling some of our dishware and tableware … just some interesting, cool things.”

As with virtually all renovation projects, there have been obstacles, some of them expected given the building’s history. “You never know what you’re going to find during a renovation,” Jean-Louis Thibon, the project manager, said. “For instance, here the foundation around the building wasn’t stable. The building was basically standing on air. So we had to completely rebuild the foundations.”

At the same time, everything that can be saved is being saved, including original beams, planks and floorboards, Thibon said. The objective is to treat and repair what is salvageable so the building will retain its original character.

The pandemic has delayed the progress of the renovation. “Inventory and shipments have been delayed,” Lee explained. “With Covid, all sorts of materials and supply lines have been held up, so windows, which should have taken eight to 12 weeks to arrive, have taken 20 to 24 weeks. So that’s been a thorn in our side.”

Despite these challenges, work on the building has moved along steadily over the past few years. The hope is for what was the hamlet’s oldest business to reopen in July or August.

Laura Lane contributed to this story.