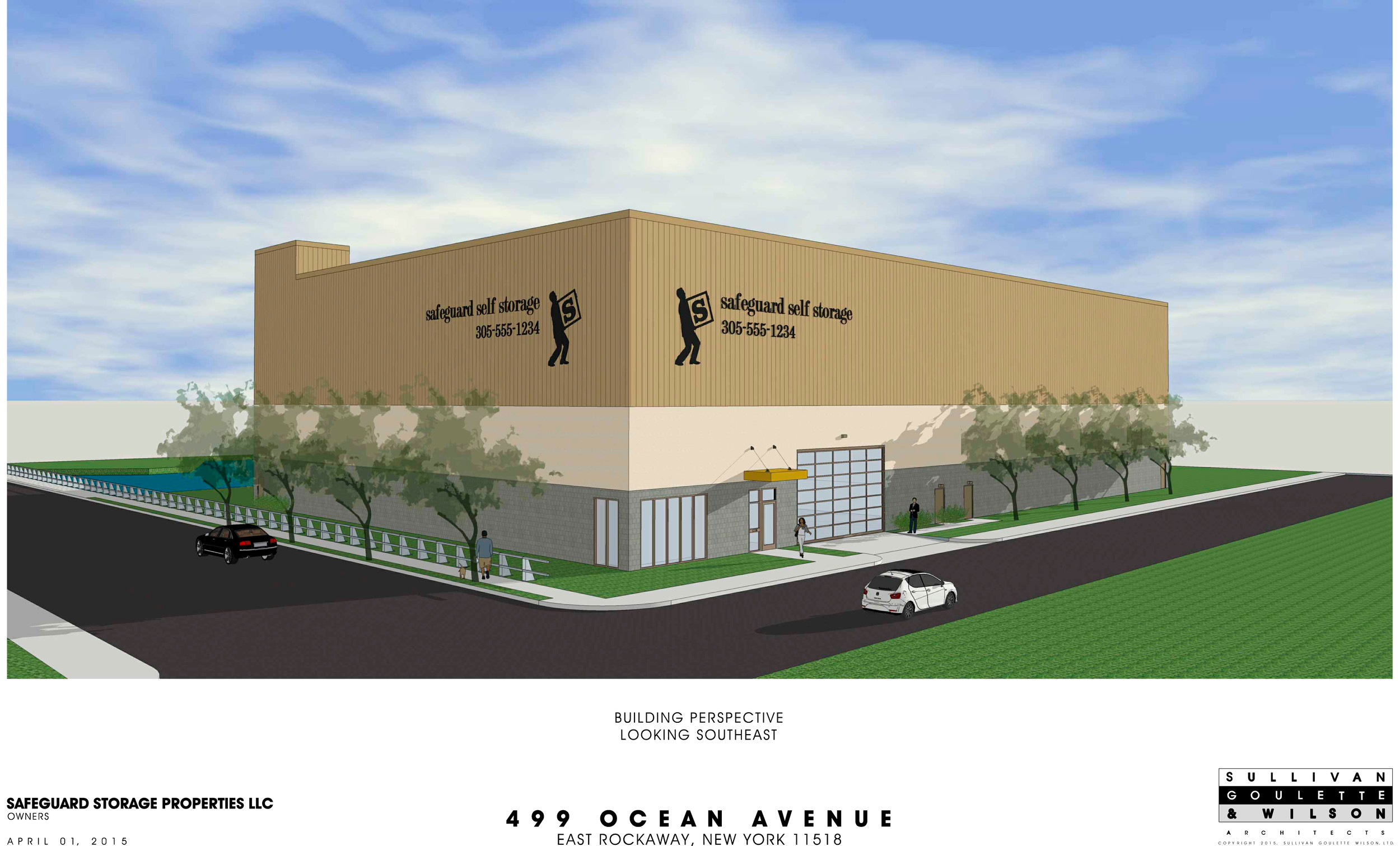 A rendering of the self-storage unit being built on the corner of Ocean Avenue and Pearl Street in East Rockaway. Stanley Bonilla, the senior vice president of development for Safeguard Self Storage, said it is scheduled to be completed by February and will be more aesthetically pleasing than the rendering.
Courtesy Stanley Bonilla
By Melissa Koenig

Construction on a new 600-unit storage facility at 499 Ocean Ave. in East Rockaway is scheduled for completion in February 2018, according to Stanley Bonilla, the senior vice president of development for Melville-based Safeguard Self Storage.

The building will offer climate-controlled facilities that regulate a unit’s temperature, and a professional staff on the corner of Ocean Avenue and Pearl Street in East Rockaway, Bonilla added. “It’s geared to the customer a lot more than some of the older ones,” he said.

In addition to serving as a place for local residents to store items, the facility will be able to provide storage for 12 East Rockaway businesses. “Up to 20 percent of our units are leased to local businesses,” Bonilla said.

According to Bonilla, the business was granted a PILOT, or payment-in-lieu-of-taxes from the Nassau County Industrial Development Agency for 15 years, because the company is also developing several other sites within the county and is employing 80 construction workers for each site. As part of this agreement, the business would pay the same amount it would pay in taxes every few months to the village, town, school district and county, rather than pay taxes on a regular basis. “It first, and most important, does not reduce the taxes,” Bonilla said.

To finalize the storage facility, Bonilla asked for a sign variance on Aug. 23 at a Board of Zoning meeting, because village code states that signs could only be 3-feet wide. But, because the facility is expected to be larger, Bonilla said, he wants a sign that is more to scale with the building. He is expected to speak with the village about the sign issue again in September. “We’re trying to find something that works with the town and something that works with the neighborhood,” he said.

The property was formerly home to W.M. Berg Inc., which had a government contract to manufacture aircraft parts for export. The company closed in 2007 and moved all of its operations to Milwaukee. Berg was the largest employer in the village at the time of its operation. The old building had to be demolished last August because of extensive mold damage caused by flooding from Hurricane Sandy in 2012, making way for a brand new facility in its place.