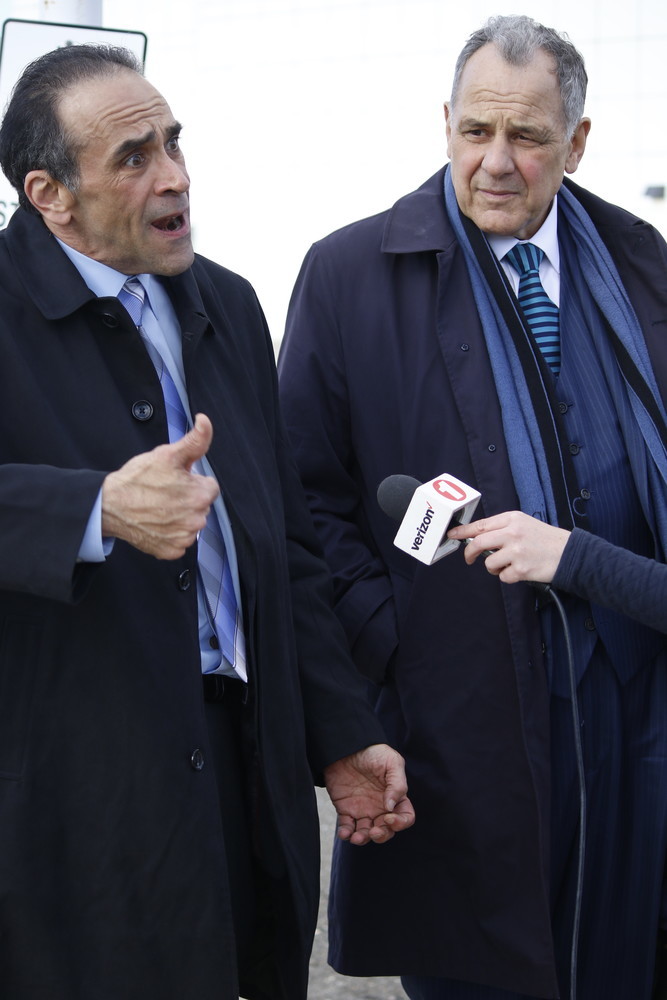 Dr. Michael Belfiore, left, and his former attorney, Tom Liotti, outside the federal courthouse in Central Islip in May 2018.
Christina Daly/Herald Life
By Andrew Garcia and Erik Hawkins

Michael Belfiore, a physician who practiced in Merrick, was denied a request for a new trial following his conviction on 28 federal charges related to his prescribing of opioids, including causing the death of two patients in 2013.

Belfiore, who was convicted in May 2018, filed a motion to have the guilty verdict overturned, arguing that his attorney at the time, Tom Liotti, misguided him in rejecting a plea deal. The deal — a guilty plea to one distribution charge — could have saved Belfiore jail time. He now faces at least 20 years in prison, and could be sentenced to life.

According to Belfiore’s subsequent counsel Bruce Barket, Liotti urged Belfiore not to take the prosecutors’ plea deal. “I don’t recall being told that if I turned down the plea and lost at trial, I would be facing counts that carried a sentence range of 20 years to life,” Belfiore said in a sworn affidavit he filed from prison in 2018. “Had I been told that my chances of prevailing at trial were actually slim, and that the proof against me was overwhelming, I would have certainly taken a plea.”

“I have always supported Dr. Belfiore in his decision to go to trial,” said Liotti in a statement following the denial for a new trial, “but it was his decision to make after being advised of the potential pitfalls such as facing a long mandatory minimum prison sentence if convicted.”

Liotti maintains that he “tried a near perfect case” for Belfiore, but publicity of the oxycodone drug epidemic at the time may have swayed the jury. Barket argued, however, that several factors determined that Liotti’s defenses were “not the conduct of reasonable and constitutionally effective counsel” — including alleged psychic consultations and a defense that “Big Pharma” caused Belfiore to be unaware of opioids’ addictive and often fatal properties.

Belfiore was convicted of causing the 2013 overdose deaths of John Ubaghs, of Baldwin, and Edward Martin, of East Rockaway.

A third patient of Belfiore, from Glen Cove, also died of a fentanyl overdose in 2009 days after Belfiore prescribed him the potent, often lethal opioid. The man’s widow, Claudia Marra, in a series of reports in summer 2017, told the Herald that her husband was addicted to opioids, and Belfiore knew it. She did not press charges against Belfiore, but her husband’s medical records were also subpoenaed by prosecutors pre-trial.

A fourth patient of Belfiore’s also died of an overdose in 2011. His family filed a wrongful death suit against Belfiore and won a financial settlement in 2017.