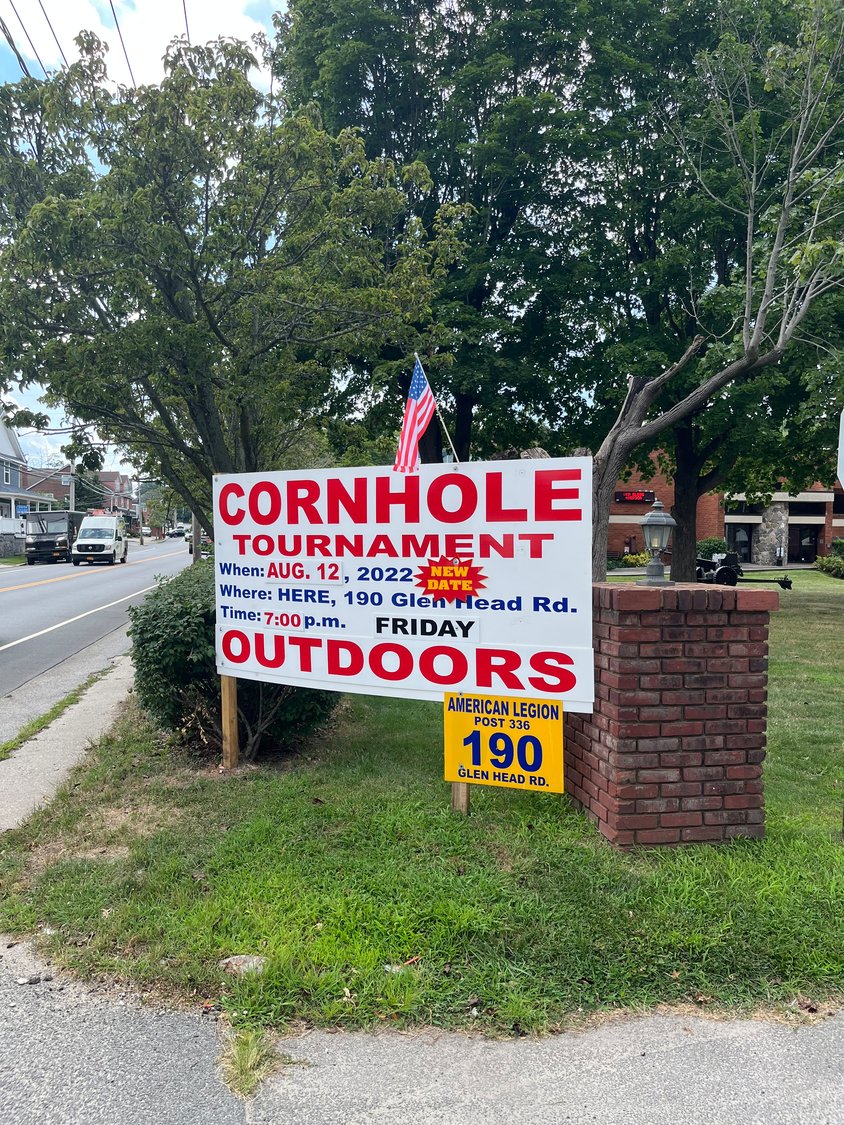 Glenwood Landing American Legion Post 336 has held a cornhole tournament open to the public once a month since April and has one this weekend.
Will Sheeline/Herald
By Will Sheeline

Glenwood Landing American Legion Post 336 will hold a cornhole tournament at their post on Friday. This will mark the fourth time they’ve held the tournament since they began the event in April. It will be the first time it is being held outdoors.
Cornhole is a popular and fast-growing lawn game in which two teams of two players take turns throwing bean bags at a raised, angled board with a hole at its far end. The goal of the game is to score points by either landing a bag on the board, or putting a bag through the hole.
The game originally started in the Midwest but has grown in popularity nationwide. The Cornhole World Championship has even been featured on ESPN, and at one point even had a larger viewing audience than Major League Baseball games, the Women’s National Basketball Association All-Star Game, and the final stage of the Tour de France, according to the website Cornhole Worldwide.
It was this growing popularity that led Louis Ligeri, second vice commander of Post 336, to suggest that the Post begin holding monthly tournaments back in April. According to him, a large part of the impetus came from the fact that cornhole has been particularly popular with younger people, who the legion hopes to encourage to engage with more of their events.
“We’re also making it a family function, not just like a veteran or older group. It’s also going to have a family function,” Ligeri explained. “It’s outdoors, the kids get in for free, and it’s just something nice to do.”


When the tournaments were held inside the post, at 190 Glen Head Road, in Glen Head, as many as 150 people attended. The organizers hope that by holding the event outside even more families and veterans, who may have been put off by the risk of catching Covid indoors, will be interested in attending.
The members of Post 336 are especially keen on attracting new members through veterans and the families of veterans who live in the area who may not been previously been aware of the post.
Bill Laderer, first vice commander of Post 336, said the goal of the legion is to always look out for their fellow veterans, and that by holding these tournaments more people will hear about the post and take part in the numerous activities they hold throughout the year.
“We’re hoping that people will show up, especially veterans, that we can sign up as new members. We’re always looking for new members of the post,” Laderer said. “It keeps people interested in what we’re doing, that we have these events from time to time, and having people check in on us helps out.”
The winners of the tournament will receive cash prizes, although the main draw for attendees isn’t the prize, but the chance to compete in a friendly and semi-competitive environment. The game is so popular that some veterans have even bought their own cornhole sets to practice during the “offseason” between tournaments.
“We have some serious cornhole guys that have their own boards that they bring to the park or practice in their backyard and have different boards made up with different sizes so they can practice different shots,” Ligeri sai. “It’s a really friendly atmosphere, but when it comes down to the last four teams it’s totally taken seriously.”
In addition to the tournament, attendees can purchase drinks from the cash bar located in the post. Bill Macedonian, a member of the Legion who runs the bar, said that creating a fun atmosphere for families and veterans is very important to the post.
“We always like to open the event up to the community,” Macedonian said. “A lot of people had no idea we were even on this property until a couple of years ago when we started doing tour drives and just opening it up to the community. You’re never gonna get members if people don’t know what’s there.”
Report an inappropriate comment