Baldwin Herald 2020 Person of the Year 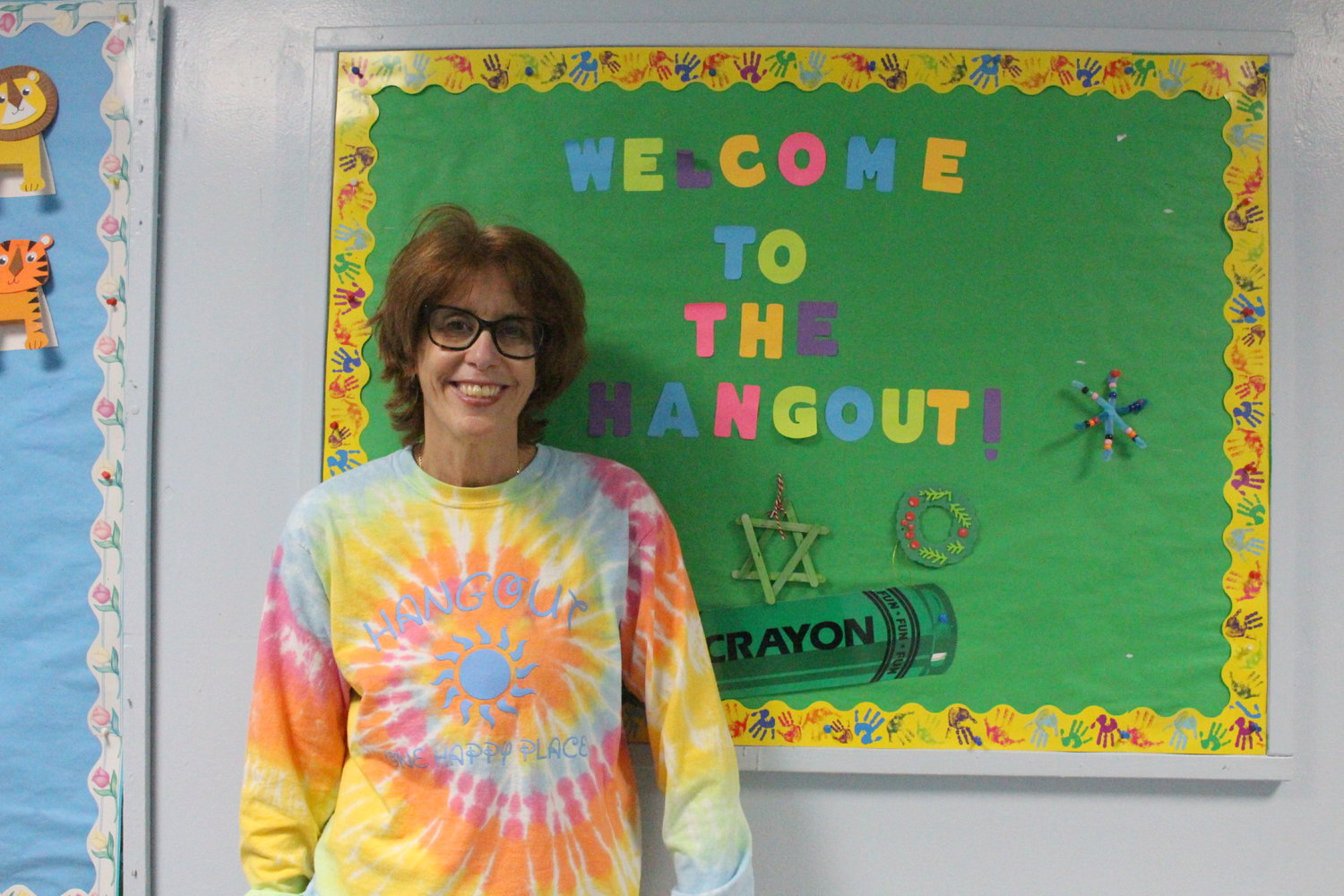 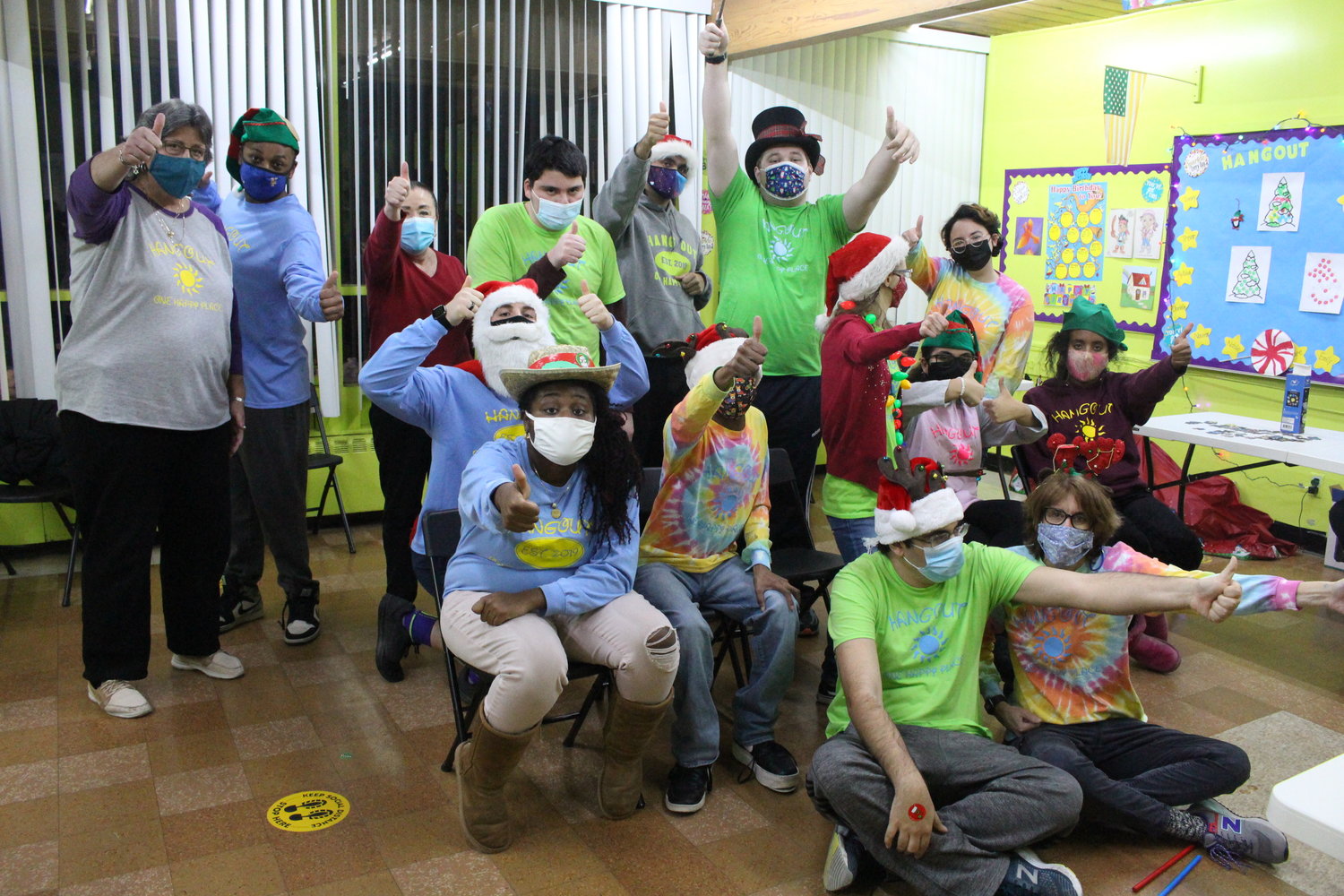 Lucas and the kids danced and sang along to music on Dec. 23.
Bridget Downes/Herald 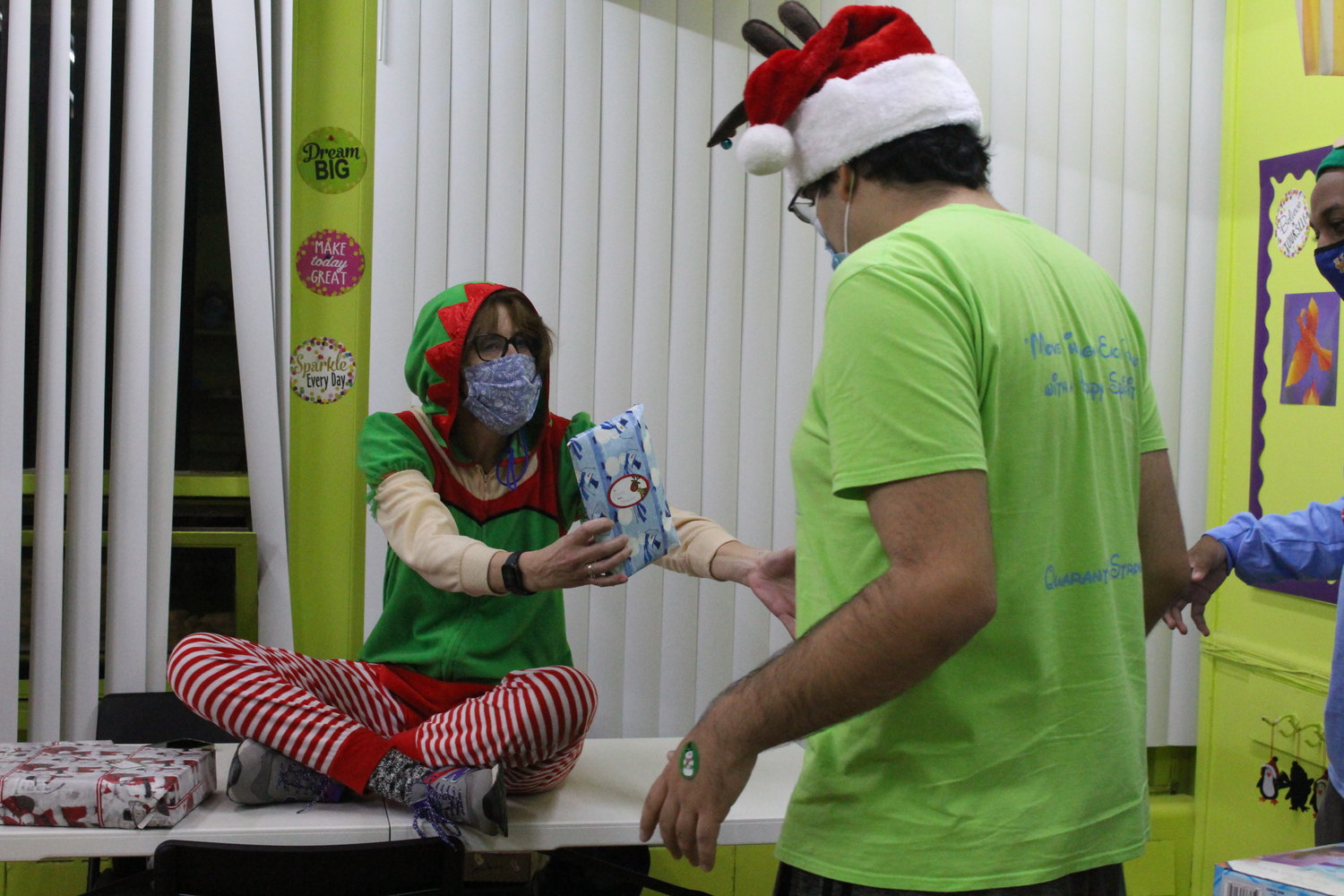 To celebrate the holiday season, Lucas surprised the kids with personalized gifts. Above, she handed a present to George Voyiatgis.
Bridget Downes/Herald
Previous Next

Angela’s like the best person in the world. She did everything. It would be nothing . . . and she helped me when I had nothing else, so I owe her everything. Forever grateful for that.”
Emily Orgill, volunteer
By Bridget Downes

For Baldwinite Angela Lucas, working with special-needs children is nothing new.

Fourteen years ago, she began working in the Baldwin School District, first as a lunch monitor, then as a teacher’s aide, eventually working with children with more severe disabilities. And since she has been with the same students for 14 years, she went through elementary school, middle school and now high school with them.

“We’ve become like a family,” said Lucas, the Baldwin Herald’s 2020 Person of the Year.

Nearly five years ago, she took a second job, with Independent Support Services, and has been working closely with a client named George Voyiatgis, a 25-year-old nonverbal autistic man.

Recognizing that it was important for him to socialize and be around friends, and knowing he doesn’t have many family members, Lucas launched Hangout One Happy Place, a nonprofit organization based in Baldwin.

Hangout One Happy Place serves as a safe space for special-needs children to socialize and engage in hands-on activities such as arts and crafts, games, karaoke singing and dancing.

“I was able to get them to join this group,” Lucas, 52, said of the students she has been working with for the past 14 years. “I had the two worlds meet, and that’s what became this beautiful thing. Everybody’s friends; everybody loves each other. It just turned out to be the greatest dream, to me, come true.”

The group met at the Baldwin Public Library once every two weeks, went bowling every Friday night, then spread out into Baldwin Harbor Town Park when it became warm outside, “and it just got bigger and bigger,” Lucas said. “Then Covid happened.”

When the pandemic struck and New York went into lockdown in March, the hangouts turned into virtual ones via Zoom, and members took part in “spirit days,” or themed hangouts. Lucas would ask their parents to send photos of them wearing crazy hats, for example, and she would compile the images into a slideshow.

“It was just something for them to have hope in,” she said. “We all stayed connected. We never stopped being together, and the pandemic has only made us stronger. We have on the back of our shirts now, ‘Live each day with a happy spirit,’ because those spirit days are what got us through it.”

Over the summer, since summer school was canceled, Lucas and her volunteers organized an impromptu summer camp, and some of the children came to the park to take part in a variety of activities, including a drum circle and spin art.

Lucas also organized informal meet-ups at Silver Lake Park to go for socially distanced walks with the children. The program allowed them to get much-needed social interaction that they might have lacked in their day-to-day lives.

“It’s really just like the best place to be, and the kids are amazing,” said Emily Orgill, whom Lucas described as her main volunteer and assistant.

Orgill, whose brother is autistic, said the organization differs from other special-needs programs in that it’s more personalized. “Angela’s like the best person in the world,” Orgill said. “She did everything. It would be nothing . . . and she helped me when I had nothing else, so I owe her everything. Forever grateful for that.”

Orgill, a 2020 Baldwin High School graduate, said the Covid-19 quarantine quashed her college and career plans. She said she didn’t plan to work with special-needs children, but she joined the Hangout over the summer and changed her mind.

“I came here, and it’s a whole different twist to it,” she said, “and I want to work here, at the Hangout, forever.”

“I wouldn’t have survived this pandemic without it,” Lucas said of the Hangout. “It’s pure joy. It’s better than any therapy you could ever get.”

As the library began to comply with stricter restrictions and the months grew cooler, Lucas sought a new home for the Hangout, and she put out a post on Facebook. The South Baldwin Jewish Center welcomed the group, housing members for most of the week, while a dojo in Oceanside houses them on Sundays.

“As I sit at the Hangout One Happy Place, I think of all the wonderful things that my amazing friend, Angela Lucas, has done for our beautiful community,” said Angela Gallagher, Lucas’s friend, volunteer, and fellow teacher’s aide. The pair met years ago when their children attended nursery school, and have been close friends ever since. “Angela has always been involved in the community, from watching over children around the neighborhood to taking care of her elderly neighbors.”

Gallagher said since its inception, the Hangout One Happy Place has seen an outpouring of support, especially from the local Baldwin community. Besides monetary donations, parents and local residents have donated games and other supplies. Some people, including a Baldwin native who moved to North Carolina, remotely hosted fundraisers to raise money for the organization.

“The gifts, the kindness; it’s like nothing I’ve ever seen,” Lucas said. “Just amazing.”

“Ultimately, it’s because Angela has touched so many lives in the Baldwin community that she’s had such an outpouring of support from many helpful hands and hearts,” Gallagher said.

And while the group was originally for Baldwin students only, it now has members from Oceanside, Island Park, Merrick, Garden City and Massapequa.

The program differs from others, Lucas explained, in that she often asks students what they would like to do — whether it’s creating art, dance or something else — rather than telling them what to do.

“Building such an inclusive and vibrant community, and doing so in the midst of the pandemic, is an incredible accomplishment,” State Sen. Todd Kaminsky, of Long Beach, said in a statement. “I applaud and thank Angela Lucas for creating such a vital space for our differently abled children to learn and grow, especially during a time when they feel most isolated. I look forward to watching Hangout One Happy Place grow and serve Baldwin residents.”

Orgill recalled how the organization started off small in the library in 2019 and grew. “And then Covid, really, was the best thing to happen to the Hangout because it just brought everyone together at a bad time,” she said. “We went to the park with nothing but that crate with, like, a ball and a couple of sticks . . . and now we have a building and closets and fundraisers, and it’s just like a whole thing now.”

At the Hangout on Dec. 23, Lucas dressed up as the Elf on the Shelf and handed out personalized gifts to each child to celebrate the holiday season. She and the children danced to Christmas music and sang along.

“I still can’t believe that I’ve done this,” Lucas said of the organization. “I just can’t believe it, like, if I look at pictures, I could cry, that this is really happening, and just the support of the community and the people is just insane.”

“Through the Hangout One Happy Place,” Gallagher said, “Angela has enabled its members to be seen and have a voice when they might have otherwise been ignored or faded into the background, and has given them a safe space to connect with each other.”