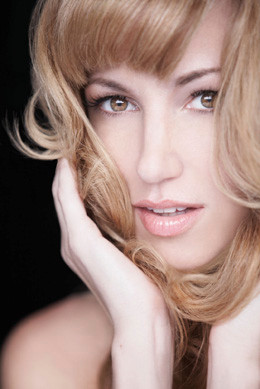 As a young girl growing up, Debbie Gibson remembers skateboarding on the streets of Merrick just outside of Calhoun High School, where she used to live.

She remembers performing in the Town of Hempstead repertory theater with her three sisters, Karen, Michelle and Denise, where she jokingly said she received her breakthrough role as an elf in a presentation of “The Elves and the Shoemaker” when she was 8 years old.

Finally, she remembers having her first album, “Out of the Blue,” produced when she was just 16 years old. Gibson wrote the 10 songs on the album, which sold 3 million copies in the U.S and 8 million worldwide.

Gibson, now 40, lives in Studio City, Los Angeles these days, has produced eight studio albums and is now hard at work on a ninth. Although she hasn’t lived in Merrick since she was 17, she still remembers her days in the community fondly. “I always say Long Island was the best place to grow up,” she said.

Born in Brooklyn in 1970, Gibson moved to Merrick with her sisters and parents, Joe and Diane, when she was 2. She said her favorite memories growing up were doing theater for the Town of Hempstead as well as in churches and temples, and she also sang in a folk group for Sacred Heart Roman Catholic Church in North Merrick.

As a child, she studied piano with Morton Estrin, who also taught Billy Joel – one of Gibson’s idols.

A graduate of Calhoun High School, Gibson said it was her ability to maintain her regular schooling while touring that made her what she is today. “I was determined to keep rooted and grounded,” she said. “I think that to this day that’s what kept me sane.”

Ron Luparello, a Merrick Fire Department volunteer for the last 22 years, has been a close of friend of Gibson since the two met at Calhoun High School. He lauded Gibson’s ability to maintain her schooling while she was embarking on her musical career. “The way she was able to do that, to stick with school,” said Luparello, “it made a nice impression, I think. It shows the values of what she is.”

“She was actually just your average teenager,” he continued. “She was just like anybody else.”