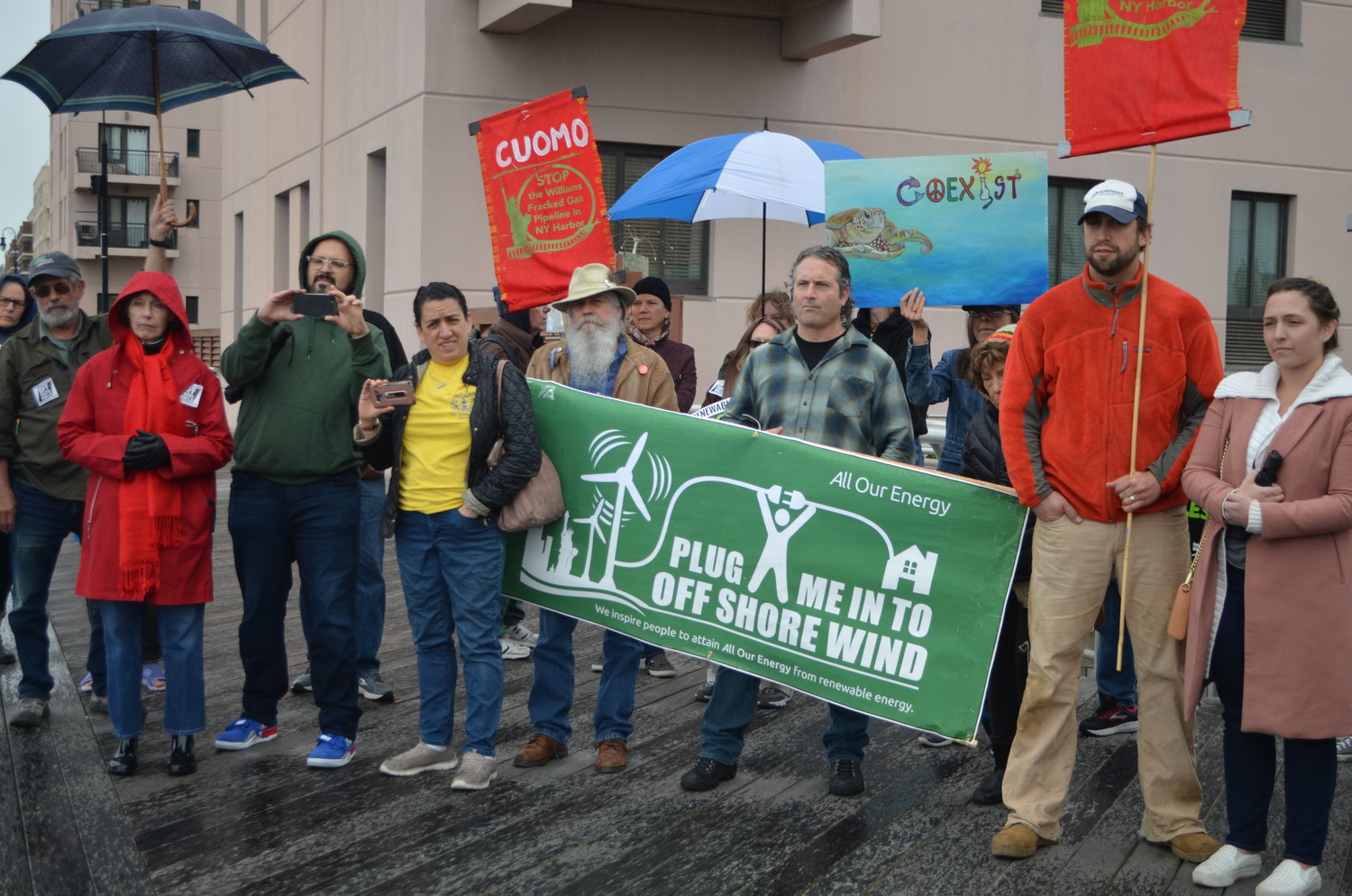 Dozens of environmental activists took to the Long Beach boardwalk on April 28 to protest the plan to build a natural gas pipeline from New York Harbor to New Jersey that they said would pose a threat to coastal communities.
Bridget Downes/Herald

It’s just the big gas companies trying to continue to ‘off’ the issue.”
Scott Bochner, Operation SPLASH
By Bridget Downes

After environmental activists rallied against plans for a natural gas pipeline that would carry fuel from Pennsylvania to New York and New Jersey, state regulators rejected the project because they said it would violate water quality standards.

“We want to go toward renewables — we don’t need more gas lines,” said Scott Bochner of Operation SPLASH, a Freeport-based nonprofit dedicated to combating water pollution. “We need to go toward more renewable energy, so why would we be spending all that money, time and effort to bring more gas lines into the area?”

The project, known as the Northeast Supply Enhancement Pipeline Project, is a 26-inch-diameter pipeline that was proposed by Transcontinental Gas Pipe Line Company LLC, otherwise known as Transco, owned by the Williams Companies Inc. Officials said that about 23 miles of pipeline, under Raritan Bay and Lower New York Bay, would connect to an existing pipeline in Rockaway, and cost about $1 billion.

Earlier this month, dozens of people rallied on the Long Beach boardwalk to protest the project — which they referred to as the Williams Pipeline — and to call on Gov. Andrew Cuomo and other elected officials to halt plans for construction. Environmental groups said the project potentially posed a danger to communities that were devastated by Hurricane Sandy in 2012, including digging up toxins in the seabed.

“There’s a lot of chemicals, mercury and things down there that they were going to stir up on the ocean bottom,” Bochner said. “There was no need for it — and that’s why we were against it.”

They also said the project would lock New York into a “fossil fuel future,” despite Cuomo’s promises to prioritize renewable energy, while promoting hydraulic fracturing, or fracking, the extraction of natural gas from the ground by injecting liquid at a high pressure.

The New York State Department of Environmental Conservation rejected an application for the project on May 15, stating that it does not meet the state’s water quality standards and would “result in water quality violations.”

The construction of the pipeline would stir up sediments and contaminants — including mercury and copper — on the seabed and negatively affect water quality, the DEC said in a news release. The construction would also harm the habitats of local marine life, the department added, such as shellfish beds.

Business leaders and energy companies warned, though, that the rejection of the pipeline could devastate the state’s economy and bring a gas moratorium to Long Island, according to The New York Times. Noelle Picone of the Surfrider Foundation NYC chapter, who leads a campaign against the pipeline, said the New York City area has enough gas coming in and uses the threat of a moratorium as a fear tactic.

“If we would take the money that we were going to put into the gas line and put it into renewables, we wouldn’t need the gas line,” Bochner said. “It’s just the big gas companies trying to continue to ‘off’ the issue.”

The DEC said it thoroughly reviewed Transco’s application and the 14,000 public comments received on the project before reaching its decision.

“The Department of Environmental Conservation raised a discrete technical issue with our application for water quality certification,” Chris Stockton, a Transco spokesman, told the Herald. “We are confident that we can be responsive to this technical concern, meet our customer’s in-service date and avoid a moratorium that would have a devastating impact on the regional economy and environment.”

Stockton said Transco submitted a new application for a Water Quality Certification on May 17.

“Surfrider is very pleased that the DEC listened to science and facts and thousands of New Yorkers’ public comments against the Williams pipeline and made the right call to protect our waters by denying this unnecessary and dangerous project,” Picone said.