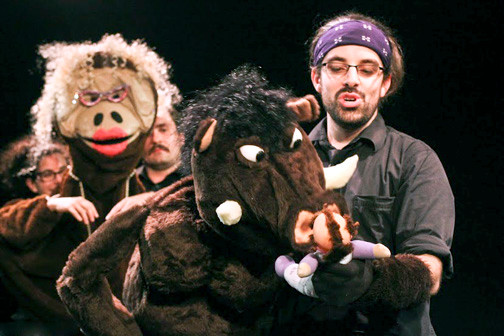 Dee Snider has been known to surprise his fans, but seeing his name paired with Shakespeare’s will certainly raise some eyebrows. However, the Twisted Sister frontman and Baldwin native is not producing your average off-Broadway Shakespearean production. Snider deems “Puppet Titus Andronicus” a “PG-13” show that is equal parts “Avenue Q,” “South Park,” The Muppets, and “Kill Bill,” with a bit of the Bard mixed in for good measure.

“Puppet Titus Andronicus” is a comedic take on what is considered to be Shakespeare’s most violent play. The Puppet Shakespeare Players, who have previously married the use of puppets, humor, and Shakespeare with “Puppet Hamlet” and “Puppet Romeo and Juliet,” are taking to their biggest platform yet, having opened their latest at the Beckett Theatre on July 30, thanks in part to the fact that the play is also a family affair. Snider Than Thou Productions is producing, while Snider’s son Shane is a puppet performer, and Snider’s wife Suzette is the costume designer…for both puppets and humans.

Snider is a multi-hyphenate star if there ever was one, lending him a keen eye for work that is outside of the proverbial box. The singer-songwriter, actor, and coveted reality star credits his South Shore roots and his wife for both nurturing his talent and keeping him