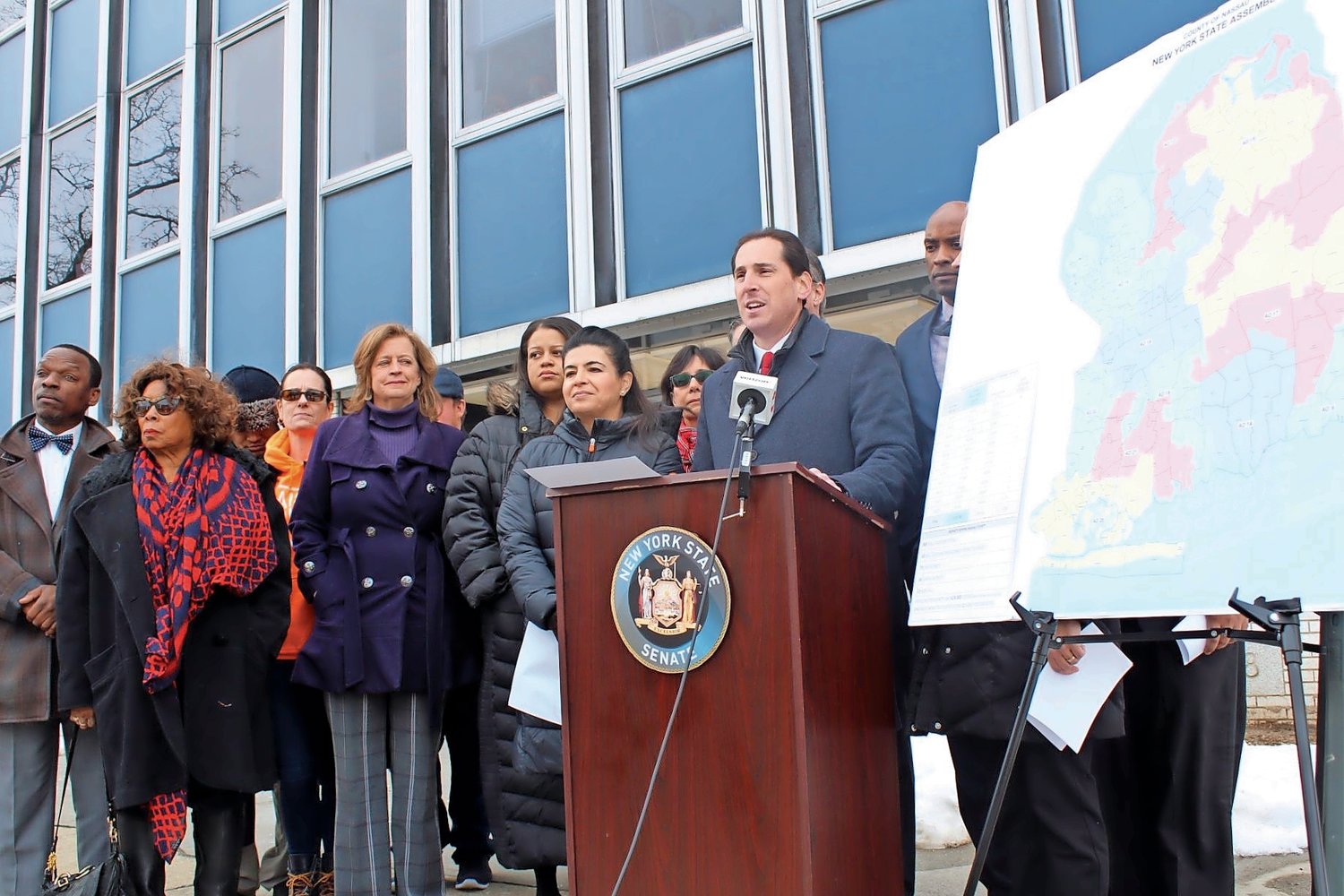 State Sen. Todd Kaminsky joined local and state officials at a news conference in Mineola Sunday, where they called on Republicans at the Nassau County Board of Elections on to establish more early voting locations.
Courtesy Senator Kaminsky's office
By Anthony Rifilato

State and local Democrats called on Republicans at the Nassau County Board of Elections on Sunday to establish more early voting locations after Gov. Andrew Cuomo recently approved a series of “historic” voting reforms.

The legislation, co-sponsored by State Sen. Todd Kaminsky (D-Long Beach), passed the Senate and Assembly in January and is aimed at increasing voter turnout and access.

The reforms, which had long been blocked by Senate Republicans, include early voting, same-day voter registration, voting by mail and consolidating federal and state primaries, which would be held on June 25 in New York instead of September.

While Nassau County has 1.3 million residents, officials said at a news conference in Mineola on Sunday that Republican Board of Elections commissioners have only agreed to seven early voting polling places throughout the county, the minimum required under the law, 10 days before the November election.

Nassau Democratic Board of Elections Commissioner David Gugerty said that he and others want to establish 19 early voting centers — the maximum allowed by the new law — including one in Long Beach, “so that all voters in all communities have ready access to this historic new way to vote.”

“I call on the Nassau Republicans to end the impasse in our negotiations and get back to the negotiating table,” Gugerty said in a news release. “After all, as elections professionals we are in the election business, not the disenfranchisement business. Opening 19 or 20 poll sites for early voting is an administrative ‘layup’ after the election we were able to pull off in a huge bi-partisan effort after Superstorm Sandy.”

“If we do what we feel is the logical thing — 19, for a county as large as ours — it would make sense to spread them evenly across the county,” Gugerty told the Herald after the news conference.

Before this year, New York was the only state in the country that held separate state and federal primary elections, among other antiquated and restrictive laws that many say suppressed voter turnout, confused voters and cost the state money.

New York — which has low voter turnout rates — was one of just 12 states without early voting. Kaminsky and other lawmakers have said early voting allows busy voters to cast their ballots in a designated period prior to Election Day and makes the voting process easier.

“Nassau County’s 1.3 million residents deserve unfettered and equal access to early voting sites,” Kaminsky said statement. “Our Board of Elections should be clearing pathways to the voting booth, not throwing up obstacles.”

A number of Republicans across the state have said that early voting is too costly; according to Newsday, the county’s costs associated with early voting could top $3.9 million.

Board of Elections Republican Commissioner Louis Savinetti did not respond to a request for comment.

Joseph Kearney, deputy Republican commissioner of the County Board of Elections, told Newsday that negotiations would continue and that officials were awaiting word on reimbursement from the state.

Gugerty said that he expects the state to reimburse the county for its costs associated with early voting, and that the $3.9 million would be a one-time startup cost.

“We’re definitely confident and in constant contact with state elected and appointed officials at the state Board of Elections,” he said. “We feel that the state funding would be forthcoming, and any shortfall, likewise we feel confident it’s something that could be taken up by the County Legislature… as a capital project.”

Gugerty also said that the voting reforms would ultimately help save money. “Fortunately, starting this year there’s only one primary,” he said, “so we’ll save up to roughly $2 million in those subsequent years.”

He said that he and others are also pushing for an early voting location in Long Beach, a city where Democrats outnumber Republicans 3 to 1.

“I know that we would be very strongly suggesting or insisting that one be placed on the barrier island, geographically and because it’s a city,” he said.

Asked whether he thought such a move would benefit Democratic candidates — and put Republicans at a disadvantage — Gugerty said an early voting site in Long Beach would give all voters more access. “It goes with the narrative of making this more convenient for people with busy lives — you shouldn’t have to go over a bridge to go vote,” he said.