Demonstrators call for reopening of LBMC

Posted Saturday, January 25, 2014 12:00 am
About 30 residents gathered in front of the Long Beach Medical Center on Jan. 25 to call on state and hospital officials to restore 24/7, 911-ambulance receiving emergency department services. LBMC has remained close since Hurricane Sandy.
Anthony Rifilato/Herald 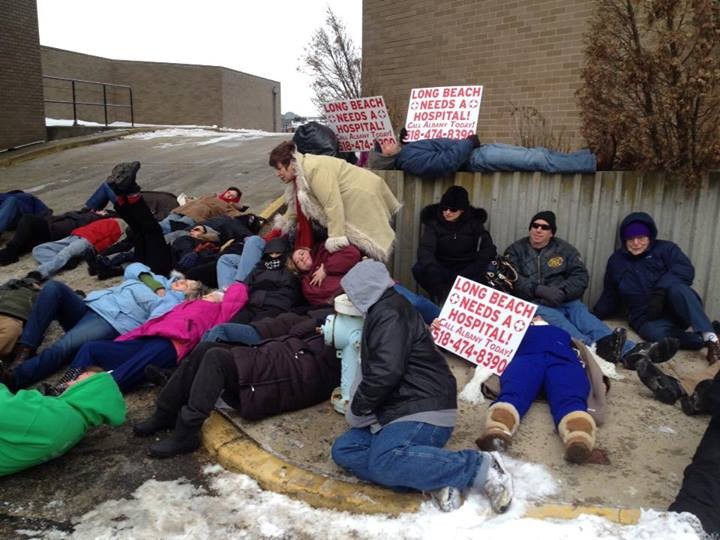 Residents staged a "die-in" at the shuttered LBMC on Saturday, where they called on state and hospital officials to reopen the facility.
Courtesy Sue Hecht/Facebook
By Anthony Rifilato

In an attempt to draw attention to what has become a raw issue for many residents, a demonstration was held on Saturday in front of Long Beach Medical Center, where about 30 protesters called on state and hospital officials to reopen the shuttered facility, which has remained closed since Hurricane Sandy.

Braving the bitter cold and wind, demonstrators gathered at the corner of Lincoln Boulevard and East Bay Drive and staged what was described as a “die-in” at 9:30 a.m., where they expressed the need for an emergency department on the barrier island. For about three minutes, demonstrators dropped to the ground and “played dead” to illustrate that lives continue to be put at risk each day LBMC remains closed. Participants, including County Legislator Denise Ford, called on the state Department of Health, state representatives and hospital officials to open a 24-hour, 911-ambulance receiving urgent care facility.

“It’s been 14, 15 months since the storm, and being a barrier island, we’re isolated, and we need access to a round-the-clock emergency receiving center,” said resident John McNally, adding that he heard about the event on Facebook. “It seemed like a powerful way to help continue to put pressure on the hospital and our elected officials in the state to ensure that this matter gets the attention that it really needs. Residents are frustrated.”

Some participants toted signs calling for the hospital’s reopening, and a few even wore costumes, including Aija Dorsey, a 20-year LBMC employee, who dressed as a trauma patient, complete with medical bandages wrapped around her head and fake blood.

“I’m dramatic,” she said. “People might die by the time they take them someplace else. We need a hospital.”

Since the storm, patients with medical emergencies have been taken to Nassau University Medical Center, South Nassau Communities Hospital or other area facilities. But many city officials complain that the trip takes too long — a Long Beach ambulance may not return for 90 minutes — strains the city’s resources and risk delays on the barriers island’s three bridges, especially in the busy summer months.