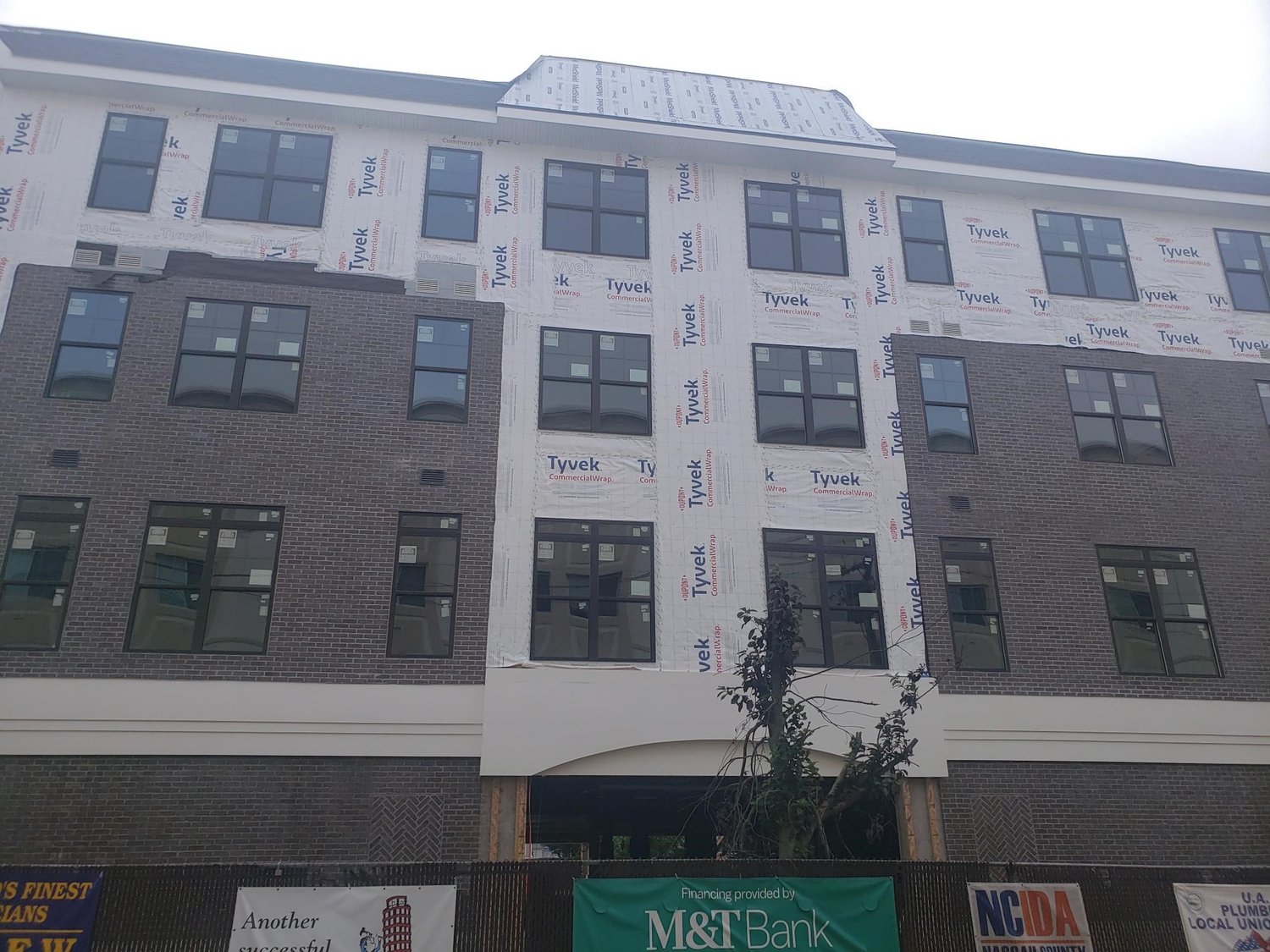 Future renters have begun leasing apartments at the Cornerstone at Yorkshire apartment complex, which is being built on the former site of the much-maligned Capri Lynbrook Motor Inn and is expected to be completed by November.
Courtesy Terwilliger & Bartone Properties
From Capri to Cornerstone: A timeline

May 2016: At a village board meeting, several residents who live nearby say they believe the motel is a nuisance and a danger to the community.

October 27: Hendrick dies and Alan Beach takes over as mayor, continuing to probe the Capri’s owners.

Feb. 27, 2020: The Nassau County Industrial Development Agency approves a 20-year payment in lieu of taxes agreement, or PILOT, for the project.

June 2020: The Capri is razed, and construction of the Cornerstone begins.

July 2021: Leasing begins for the Cornerstone property and developers set November as the goal for completion.

The Cornerstone at Yorkshire apartment complex, which began leasing to future renters July 5, should be open by November, its developers say.

The four-story, 80-unit, $24 million apartment building will replace the Capri Lynbrook Motor Inn, which was razed in June 2020 after several battles between village officials and the motel’s owners over alleged crime and prostitution at the site.

“We couldn’t be more excited about it,” said  Anthony Bartone, managing partner for Terwilliger & Bartone Properties, “and hopefully it leads to other opportunities in Lynbrook. We hope that we can demonstrate to the village how lovely these buildings can be. Putting this in place of an old motel is certainly a step up.”

Bartone said Terwilliger was offering a special incentive: the first month’s rent free for anyone who rents before construction is complete. He added that he believed the project would meet the planned completion date, despite supply-chain disruptions during the coronavirus pandemic.

Bartone said there is a community manager on site full-time now who occupies a leasing trailer and can offer virtual tours or informational pamphlets to anyone who wants to learn more about the complex.

Mayor Alan Beach recently said he was excited by the progress. “This property has long been a nuisance for the village,” he said, “and I’m thrilled to be here today to help bring a welcome revitalization that not only will add foot traffic for local businesses, but also bring the kind of smart development that strengthens the community as a whole.”

Apartments will include quartz counters, stainless-steel appliances and high ceilings, and the complex will have a fitness center, clubroom and courtyard. It will comprise eight two-bedroom apartments that will rent for about $3,400 per month, 44 one-bedroom units that will cost roughly $2,800 and 28 studios, which will be about $2,300 per month. Eight units will be set aside as workforce housing, which, under federal Department of Housing and Urban Development regulations, must have reduced rents for households earning up to 80 percent of the median income for the area. The first story of the building will house a parking garage, and three stories will be for the apartments over the nearly 1-acre site.

The village board approved the project, 4-1, in November 2019, and the Nassau County Industrial Development Agency unanimously granted a PILOT, or payment in lieu of taxes, agreement for it in February 2020. The IDA okayed a mortgage-recording tax abatement, a sales-tax abatement and a 20-year PILOT, which will begin at the present tax level of $228,155 per year and gradually increase to $1.1 million by its final year.

Bartone has tried for years to build an apartment complex in Lynbrook, including the Cornerstone at Lynbrook project, which spurred community backlash and a contentious mayoral race between Beach and his former Deputy Mayor Hilary Becker, who did not seek re-election when his trustee term came up in March. Bartone said he thought the project at the former Capri site was better for the village because it takes the place of an unwanted motel.

Just before it was razed, motel general manager Henry Wagner told the Herald that the facility’s managing partner thought the time was right to sell the property, adding that the village’s claims against the motel were never proven in a court of law, despite a set of public hearings at which village officials sought to revoke the motel owners’ license to operate.

“We’ve never had any issue from the [village] regarding the closing of our property because we knew everything they accused us of was bogus,” he said.

For updates on the project, or to learn more, visit cornerstoneyorkshire.com.