A retired town archivist on living in history 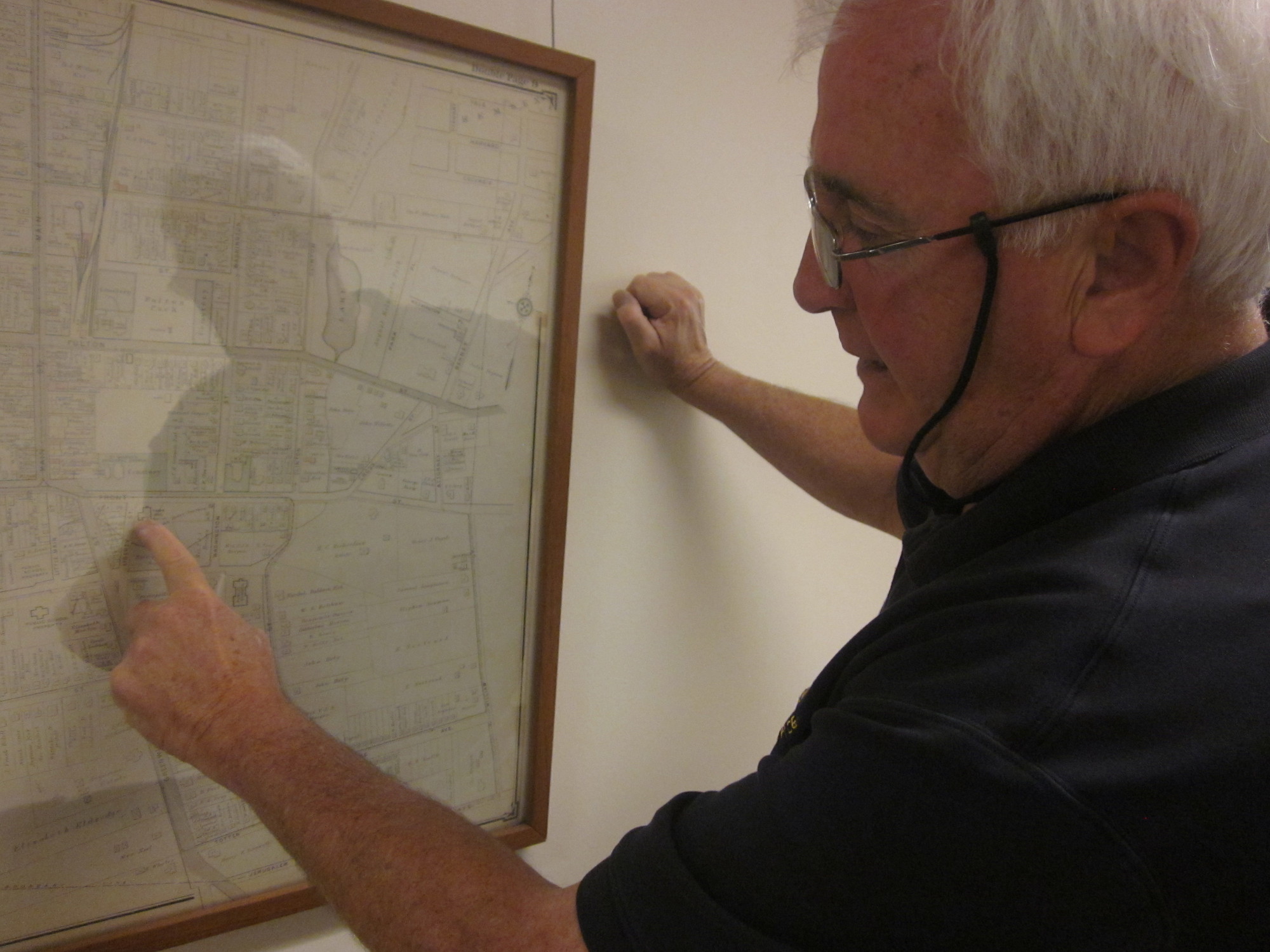 Thomas Saltzman explained the history of the Town of Hempstead’s many villages while pointing at the page of an E. Belcher Hyde atlas.
John Maher/Herald 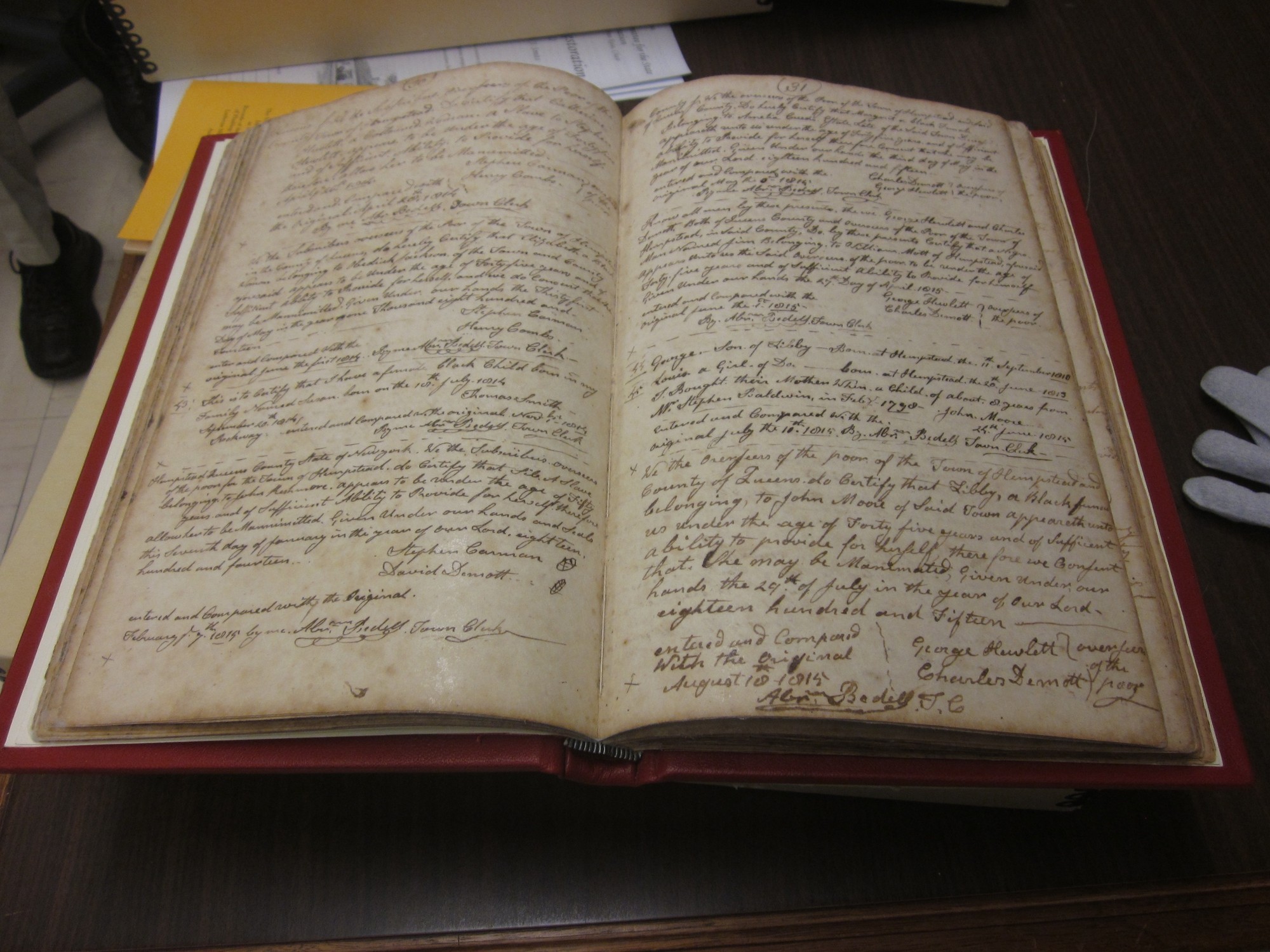 The oldest of the books in the Town of Hempstead Archives date back to 1707, though the bulk of them are from 1784 and after.
John Maher/Herald 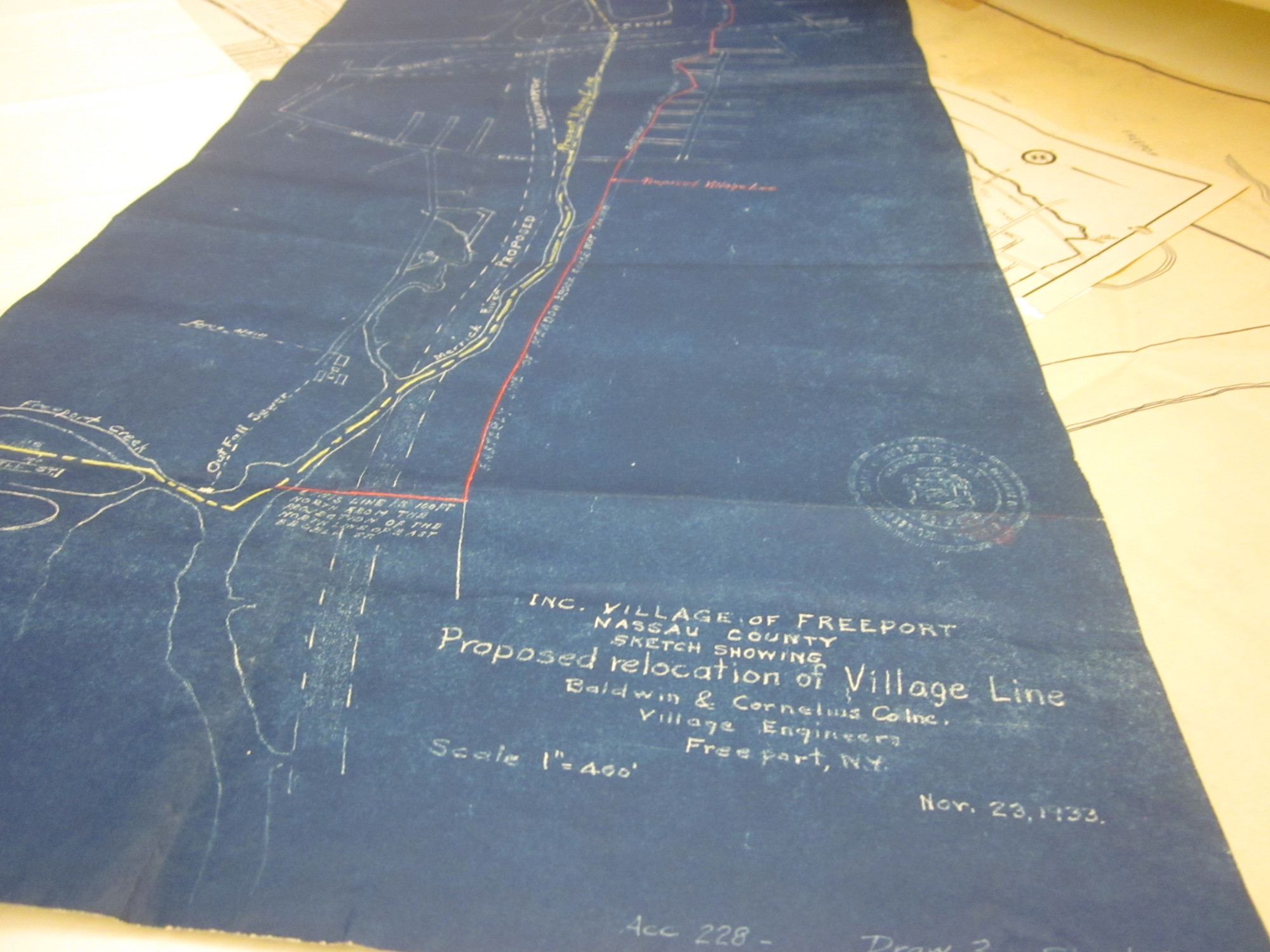 A blueprint, dated 1933, of the plans for the proposed Meadowbrook Parkway.
John Maher/Herald 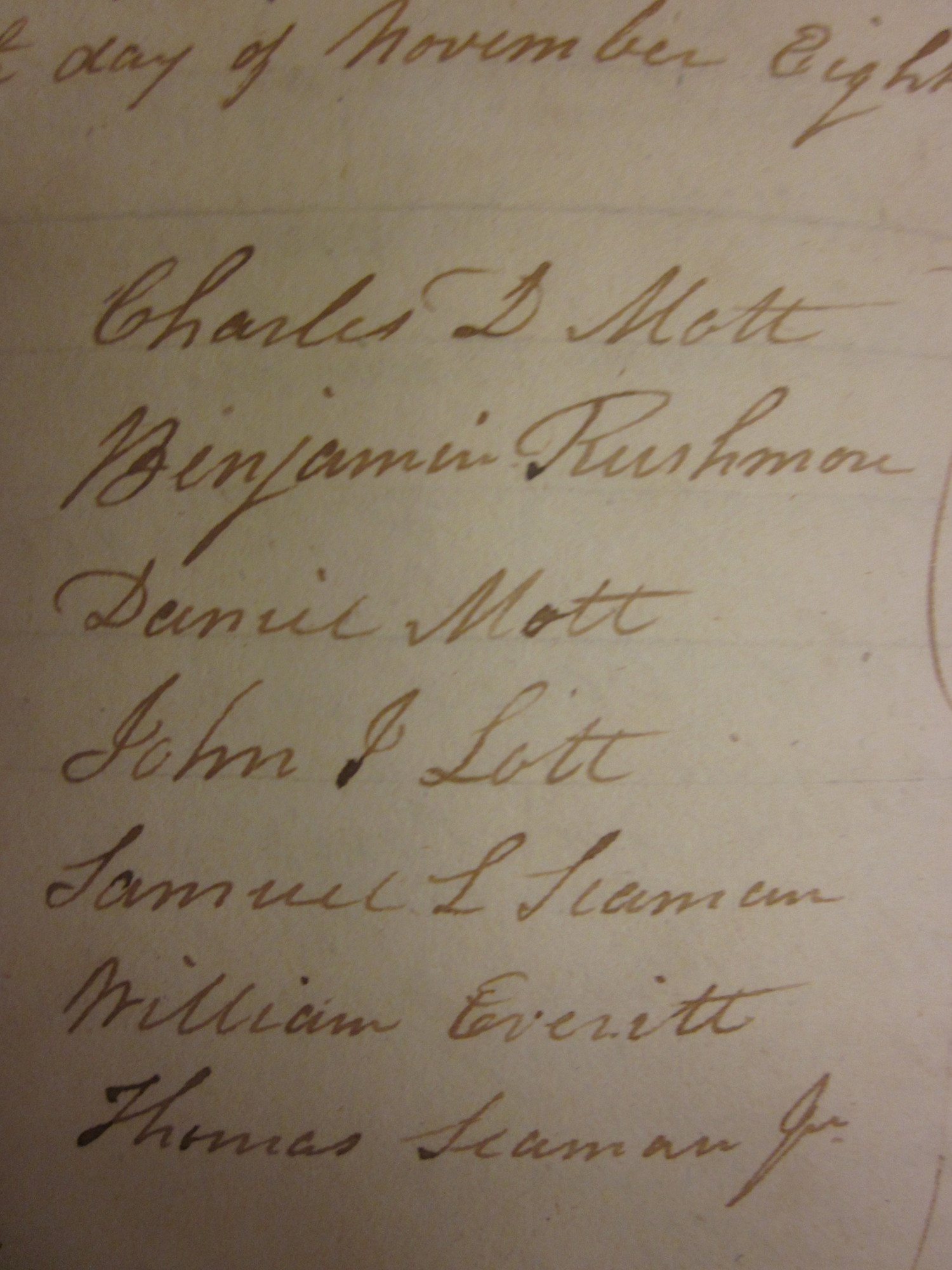 Signatures from some of the founding fathers of Hempstead, including Charles DeMott and Samuel Seaman.
John Maher/Herald
Previous Next
By John Maher

“This was the graveyard of the town,” Thomas Saltzman murmured, gesturing toward the carefully kept shelves of records that line the walls of the Town of Hempstead Archives. “This was every piece of surplus sh-- furniture you ever wanted to see. Nothing was arranged. All the books were just in stacks.”

Saltzman, who retired in late February after 24 years as town archivist and historian, was showing me around the basement of Town Hall, where hundreds of thousands of records from Hempstead’s 370-year history are kept. The archives are held in a series of climate-controlled rooms that snake beneath the building, lit with lights shielded from ultraviolet and guarded by a number of alarm systems, including one for humidity and water. Nearly all the walls are hidden — some are lined with racks holding tubes of old land records, while others are covered by bookcases and filing cabinets stuffed with anything from birth and death certificates to records chronicling the histories of the town’s many car fix-it shops.

“Put that down,” Saltzman told me, waving a hand at my camera, “and put these on.” After passing me a pair of white cotton gloves, he reached for a relatively new-looking book, bound with a deep maroon cover. The contents, however, dated back to 1784, the year the original Hempstead split into the current town and its neighbor, North Hempstead. The yellowed pages, some of which were commercially lined, were covered in a looping script detailing cattle and sheep owners and their earmarks — marks burned onto the ear of a sheep or cow to indicate its owner.

“Prior to [1784], the Town Clerk lived in North Hempstead, so in those days, the keeping of records depended upon — oops, I lost my job, here are my records, now you’re the new town clerk,” said Saltzman. “Now, everything prior to 1784 stayed in North Hempstead. … My earliest original book is from 1707, when the members of [St. George’s C]hurch across the street gave the pastor there an actual book to transcribe from his memory — baptisms and marriages he’d performed in the first couple of years of his service.”

Saltzman is a natural curator. After graduating from Long Island University’s C.W. Post campus with both a bachelor’s and master’s in fine arts, he was hired almost immediately to work as a cultural aide at the Office of Cultural Development at Roslyn’s Frick Estate, which hosts the Nassau County Museum of Art, in 1973. By 1979, he was appointed director of the museum.

“I guess I’m a little bit careful when it comes to taking care of things,” Saltzman laughed. “My background, though, was printmaking. My background was paper. So I’ve always been concerned with the life of paper, the content of paper, and the knowledge of that — and, you know, what conditions play on paper. … So it was natural for me to become a museum person, and then it became a natural kind of work here with our archives.”

In 1989, Saltzman left the museum for the Town of Hempstead archives, where he’s been ever since, diligently maintaining the vast number of records held by the country’s largest township. But when he first arrived, the place was a mess — or, as he put it, a “graveyard.”

“Little by little, starting with the earlier stuff and working my way through it, vault after vault, I just worked on getting rid of stuff — reclaiming space,” said Saltzman. “Finally, we got enough grants to install shelving, stuff like that. … From there, we just snowballed. We got grant after grant after grant.”

The sheer volume of recorded detail is astounding — as are the methods of preservation. Every record that hits the archives is backed up over and over; it’s not uncommon for multiple hard copies and microfilms to exist for each record, in addition to a digital copy.

“Everything we do goes off-site,” Saltzman explained. “We have off-site duplicate masters of all of our microfilm in Iron Mountain, upstate New York, which is an actual hollowed-out mountain that was for iron ore. They have climate-controlled, huge vaults. So everything we have was shipped out there, so my records could be duplicated after a disaster.”

Saltzman pulled out another book to show me, this one with binding that appeared a bit older than the last, dated 1799-1824. One side of the book chronicled road and highway records from that period. The other side, however, was far more sinister. In it were records of children born to slaves owned by Hempstead residents during that same time period — the nearly 30 years between New York’s 1799 vote to gradually abolish slavery and its eventual mass manumission on July 4, 1827. No new slaves were allowed to be taken after 1799, but in the meantime, town clerks still had to record births and freeings.

I thumbed through the pages, and attempted, faltering, to read aloud one of the cramped lines: “On the second day of February, 1800, born at my house, a male child named William, of the body of a Negro woman, my slave.”

Quietly, almost to himself, Saltzman murmured: “He doesn’t even give a first name.”

Many of the names that were found in these books would ring a bell of familiarity for most locals. Page after page held the signatures of such men as John Nostrand, Samuel Seaman and Charles DeMott, who gave their monikers to roads from Brooklyn to the eastern end of Nassau County — which, until Queens was named a borough of New York City in 1898, was merely the eastern 70 percent of that county. Nassau County was officially made its own county in 1899.

As my morning at the archives came to a close, I asked Saltzman to show me some old maps. He didn’t have many that were too old, he told me, but there were some: a map of the Merrick Campgrounds from the early 20th Century; blueprints of the proposed Meadowbrook Parkway from 1933; pages of an E. Belcher Hyde atlas from 1906, showing portions of Freeport, Oceanside, Rockville Centre and a number of other villages. He lives in Wantagh now, he told me as he pointed to framed pages of the atlas, but he’s spent time all across the Island — born and raised in Jackson Heights, he hopped from village to village across the North Shore before settling down and raising two of his three children in Freeport.