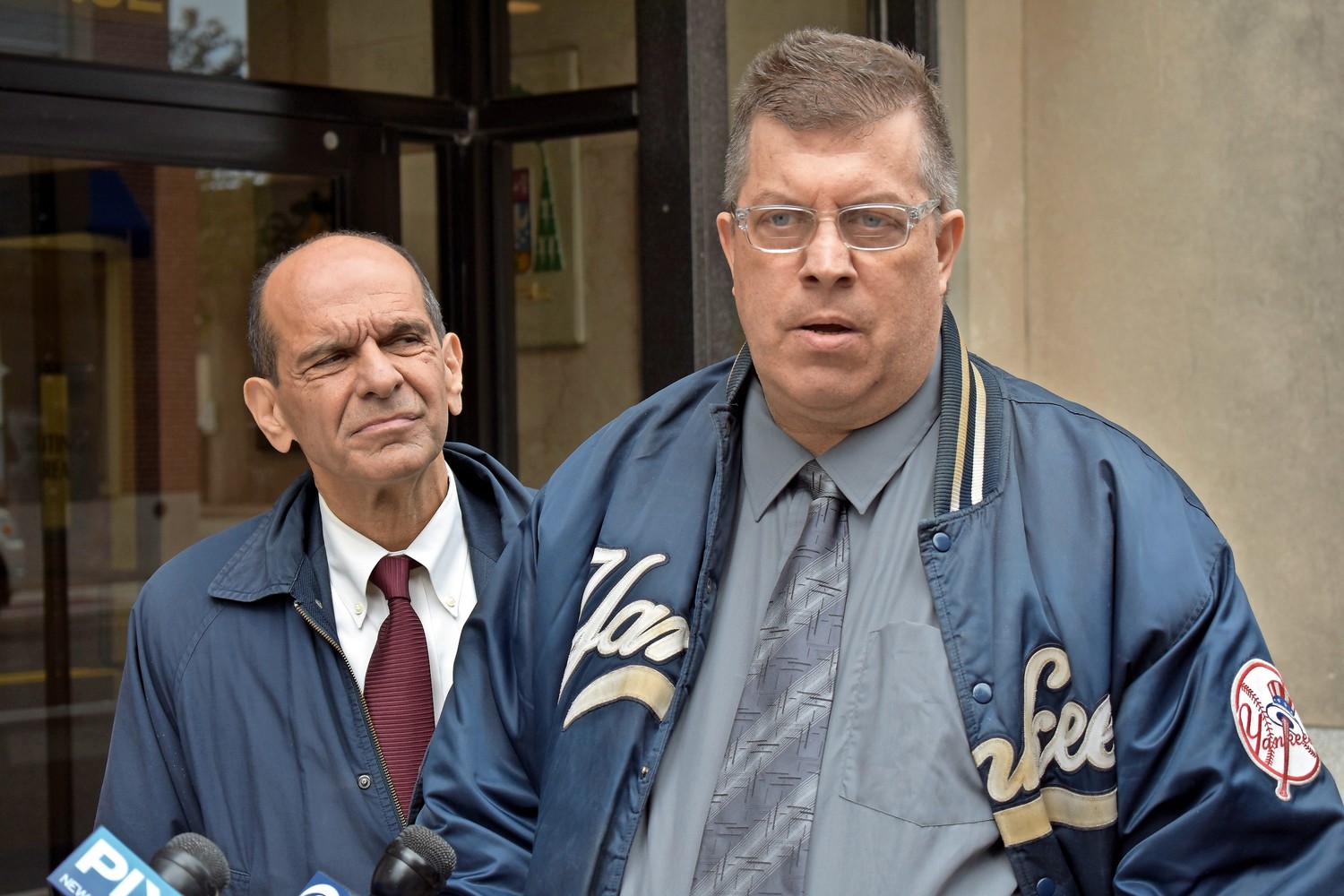 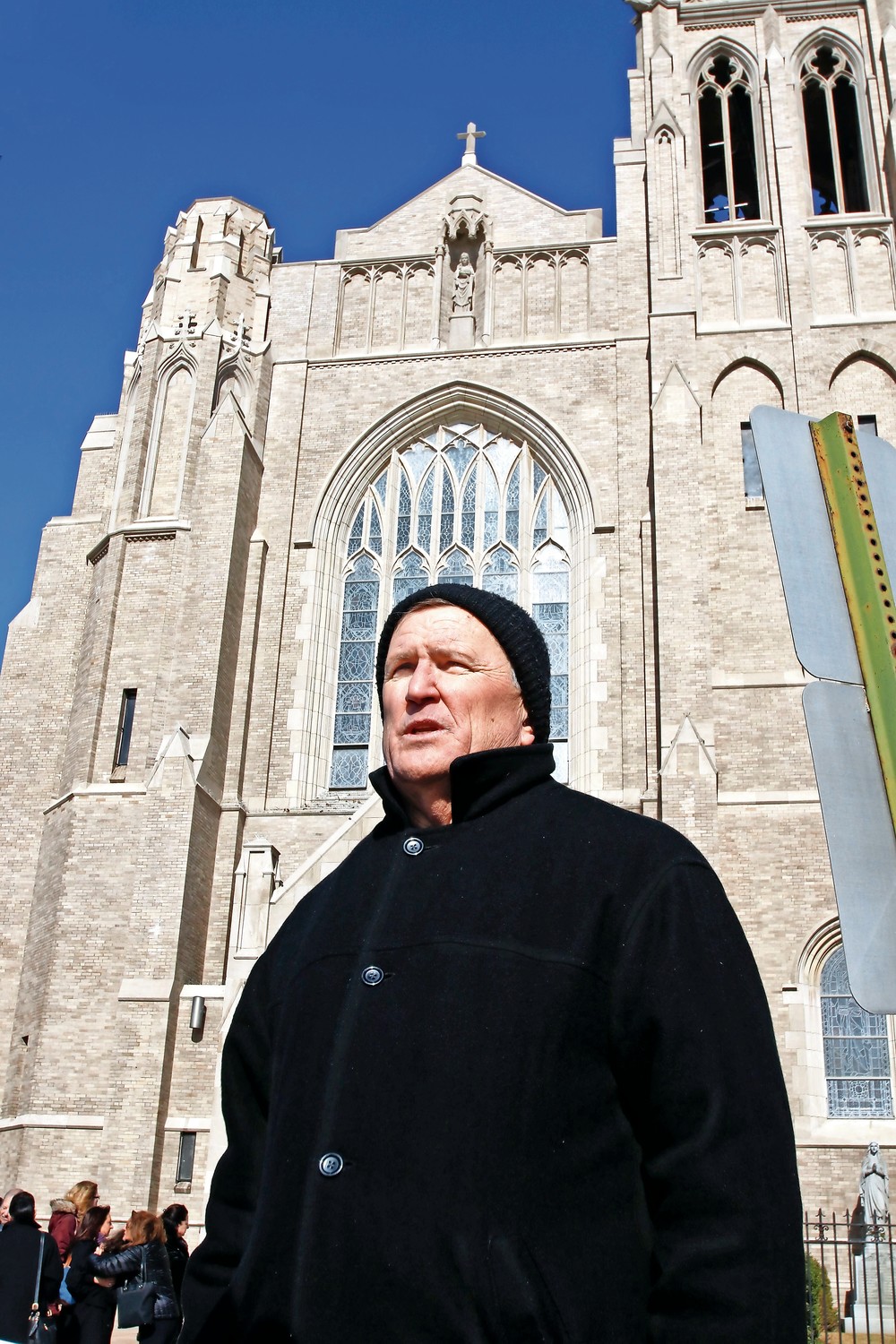 An alleged sex abuse victim who filed a claim in the Diocese of Rockville Centre’s Independent Reconciliation and Compensation Program last year was recently granted a settlement of $500,000, according to the man’s lawyer, Mitchell Garabedian.

The recipient of the settlement, Thomas McGarvey, was 16 when he alleges that Father Robert L. Brown began sexually abusing him at St. Catherine of Sienna Church in Franklin Square. The abuse, which allegedly took place in the church’s rectory, spanned from 1981 to 1989, McGarvey said at a news conference last October. Brown has since died.

Garabedian — who was portrayed by actor Stanley Tucci in the Oscar-winning film “Spotlight,” about the Boston Globe’s series of stories detailing the abuse allegations against priests in Boston — is representing dozens of others who claim that clergy members within the diocese sexually abused them.

“The settlement amount has helped Mr. McGarvey gain a sense of validation and realize that the sexual abuse was not his fault,” Garabedian told the Herald in a phone interview on Monday. “As a result, Mr. McGarvey can try to gain a degree of closure with more confidence and maybe move on in his life to a greater degree.”

Robert Hoatson, a retired priest of New Jersey who has helped McGarvey for about eight years through his organization, Road to Recovery, which assists survivors of sexual abuse, spoke at a news conference outside St. Agnes on Tuesday following the settlement.

“New York is one of the worst states to get justice from this type of abuse,” Hoatson said, “but [Thomas] went for it and now his abuse has been acknowledged.”

“Neither the Diocese nor the administrators will discuss any matter presented,” Sean Dolan, a diocese spokesman, said in a statement on Tuesday.

A report released earlier this month by Lawyers Helping Survivors of Child Sex Abuse — a group made up of attorneys from three law firms in New York, Seattle and Minneapolis — identifies 51 clergy members, who worked at more than 100 churches and schools across Long Island, accused of child sexual abuse within the diocese. Brown, according to the report, worked at St. Agnes Cathedral from 1958 to 1968.

“The true extent of abuse in the Rockville Centre Diocese is unknown, but this report makes clear that it was a pervasive problem,” said attorney Patrick Noaker, of the Minneapolis-based Noaker Law Firm. “Survivors are not alone, and we must support healing by sharing more information about what happened rather than letting it stay covered up.”

Information on the alleged abusers, which the 19-page report notes “is scattered across several sources and not readily available from the Rockville Centre Diocese,” was compiled from survivor accounts, news articles and BishopAccountability.org, a website that tracks sex abuse in the Catholic Church. Dubbed “Hidden Disgrace II,” it builds on a 2003 Suffolk County grand jury report that detailed, but did not name, 23 priests accused of abuse in the diocese at the time.

“The information in the recently published ‘Hidden Disgrace II Rockville Centre Report’ … was compiled from existing public-source content with varying degrees of accuracy and does not reveal any new information,” Dolan wrote in a statement last week.

“…We stand in solidarity with our survivors and their families and we continue our commitment and vigilance to the protection of children in our Church and in society,” he added.

A Rockville Centre resident who wished to remain anonymous, previously an altar boy at St. Agnes, told the Herald last October that McGeever sexually abused him between 1983 and 1993.

McGeever came to St. Agnes in the early 1980s to help coordinate the church’s

renovation, according to “To Believe in a Vision: The Story of a Cathedral and its Builders,” by James M. O’Neill. The 48-year-old said that McGeever, who had a bad leg, would ask him to help stretch it as part of his physical therapy, and later to shower with him so that he wouldn’t fall.

Garabedian, who also represents that man, said Monday that no settlement has yet been granted for him.

A Farmingdale family filed a complaint against Brinker in 1996 for allegedly inappropriately touching 14-year-old Matthew Moraitis on an airplane trip to San Francisco, Newsday reported in 2002. Moraitis told Newsday that Brinker, while they were staying in a Las Vegas hotel, also invited him into his bed to watch pornographic movies.

In 2005, the Vatican deemed the allegations against Brinker unsubstantiated, and he was cleared to return to ministry, according to BishopAccountability.org. Brinker was serving at St. Agnes when he was placed on leave in March of 2002.

Also in 2002, McComiskey, who had worked at St. Agnes from 1978 to 1986, according to the report, was forced to retire after a sexual misconduct allegation was made against him on the diocese’s sex abuse hotline.

Because New York state’s statute of limitations prevents survivors of child sex abuse from taking criminal or civil action against their abusers after they reach the age of 24, most of the allegations detailed in the report have not been heard in court.

The diocese launched its Compensation Program last October. Phase One, open to those who have previously reported abuse, closes on March 31. Phase Two of the program, for those with new allegations, closes on April 30. To receive compensation, victims must agree that they will not pursue legal action against the church in the future.