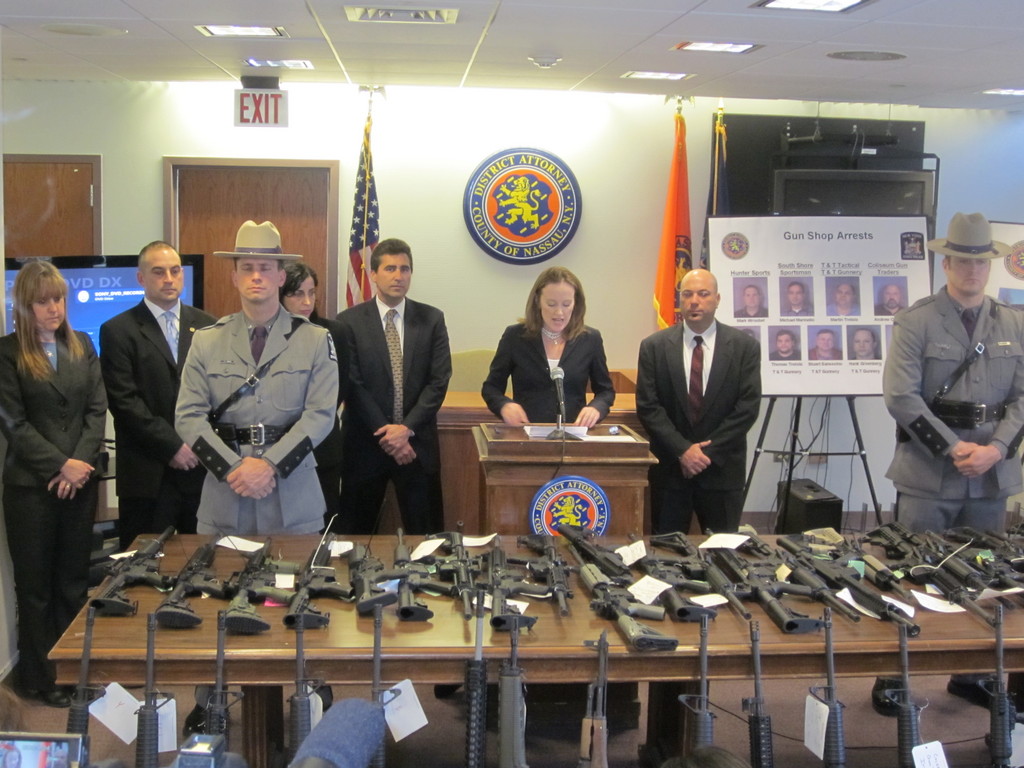 After a 10-month undercover investigation by the district attorney’s office and New York State Police, four storeowners and five of their employees were arrested, Rice said at a news conference in Mineola.

Among those arrested were Andrew Chernoff, 50, of Malverne, owner of Coliseum Gun Traders LTD in Uniondale; Martin Tretola, 55, of Bellmore, owner of T&T Tactical in New Hyde Park and T&T Gunnery in Seaford; Michael Marinello, 41, of East Meadow, owner of South Shore Sportsman in Merrick; and Mark Wroobel, 40, of Smithtown, owner of Hunter Sports in Massapequa.

“The nine men arrested today were openly breaking the law, making a practice of putting profits before the safety of our citizens and flooding our streets with dangerous assault weapons,” Rice said.

The district attorney said that State Police officers and county investigators executed search warrants at the five gun shops on Feb. 16, ordering them to cease distribution of illegal assault weapons that were for sale. According to Rice, the storeowners were temporarily modifying the guns so they did not fit the definition of an assault weapon, but made the modifications reversible.

Throughout the 10-month probe, undercover police officers entered the stores posing as civilians wanting to purchase guns. Rice showed a video of one instance in which an undercover policeman filmed a conversation with Tretola in one of his stores, where he demonstrated how to remove the temporary pin from the fixed stock of the gun, making it collapsible — and illegal.

“What this means is you take that pin out, I’m telling you you’re in trouble with this gun,” Tretola told the officer.

“There’s no question that Mr. Tretola knew what he was doing,” said Rice. “He knew exactly what the state of the law is here in New York state, and was selling weapons and giving people the information they needed to violate the law.”

According to Rice, an assault weapon is defined as a semiautomatic rifle that has the ability to accept a detachable magazine and has at least two of several possible additional characteristics: a folding or telescoping stock, a pistol grip that protrudes conspicuously beneath the weapon, a bayonet mount, a flash suppressor or a threaded barrel designed to accommodate a flash suppressor, and a grenade launcher.

“These are assault weapons,” said Rice. “These are combat weapons, and that is what they are intended to be used for and they have no place here.”

In two instances, Rice said, residents bought illegal weapons from the stores, were arrested and later returned to the stores to inform the owners that they had been arrested. Despite this, Rice alleged, the storeowners continued to sell the illegal guns.

If the storeowners followed the appropriate procedures and recorded information on the customers to whom they sold the guns, Rice explained, investigators should be able to track them down. As of now, neither Rice nor State Police Senior Investigator Joseph DeMaria could say whether any of the guns the shops sold have been used in further illegal activity.

“This is something that we are going to continue to be very aggressive about here in Nassau County,” Rice said.

Storeowners Wroobel, Chernoff and Marinello were charged with the manufacture, transport, disposition and defacement of weapons and dangerous instruments and appliances. Carmine Rotondo, 68, of Garden City, an employee of Coliseum Gun Traders LTD, faces the same charges.

Additionally, all of the defendants and their businesses were charged with unlawfully disposing of an assault weapon and misdemeanor violations of the Firearms Licensing Provision. Each defendant faces up to seven years in prison, and each business faces fines of up to $10,000 per felony or double the amount of its gain from the criminal conduct.

Among the defendants are four of Tretola’s employees, who were also arrested: Thomas Tretola, 24, of Bellmore; Stuart Sansevino, 59, of North Babylon; Hank Greenberg, 32, of Oceanside; and Morgan Owens, 22, of West Islip.

Attorneys for the defendants could not be reached by press time.