Dozens protest outside Shake A Paw in Lynbrook 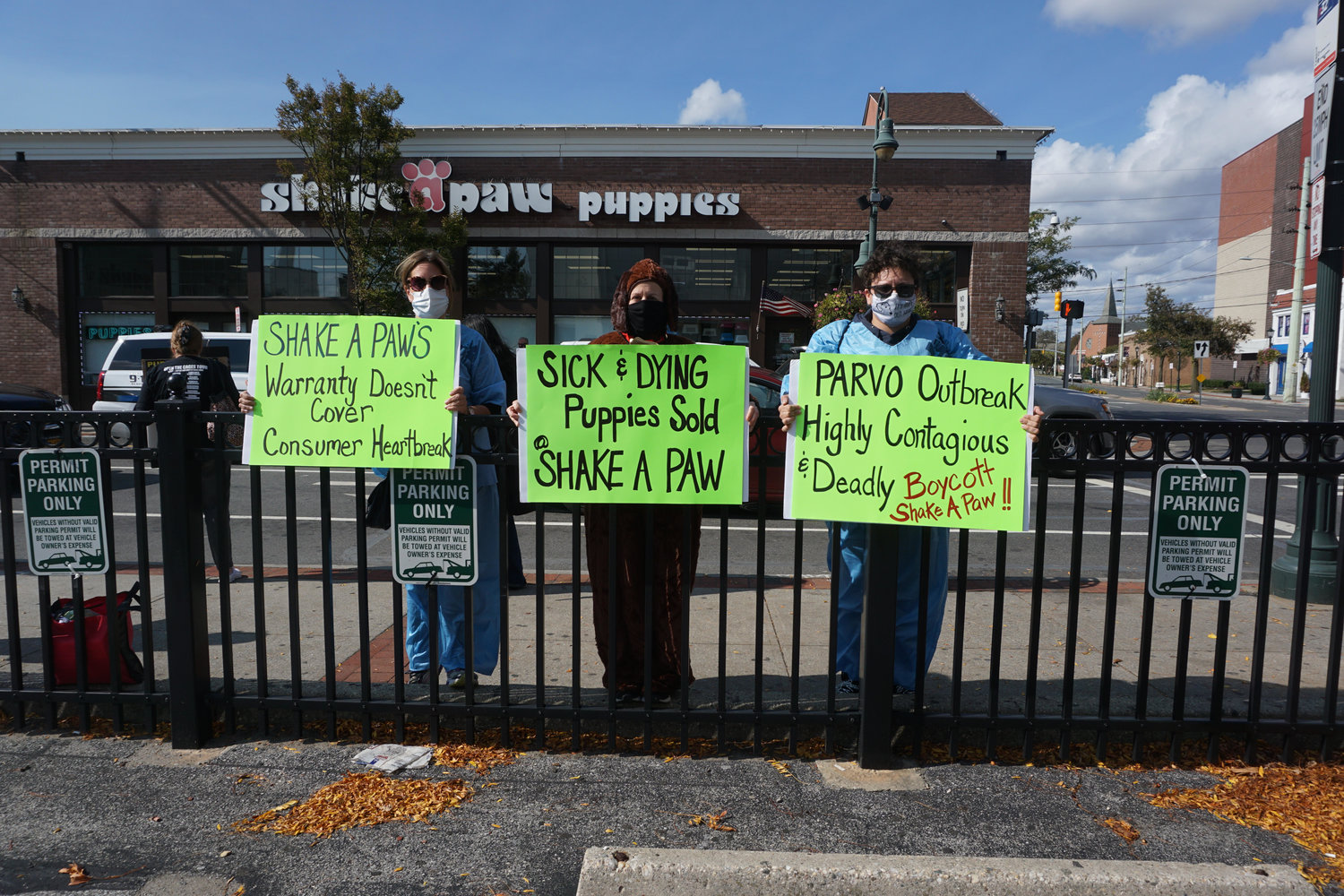 Protesters lined up outside Shake A Paw in Lynbrook on Sunday, seeking to hold the shop accountable for the deaths of puppies sold there.
Nicole Alcindor/ Herald 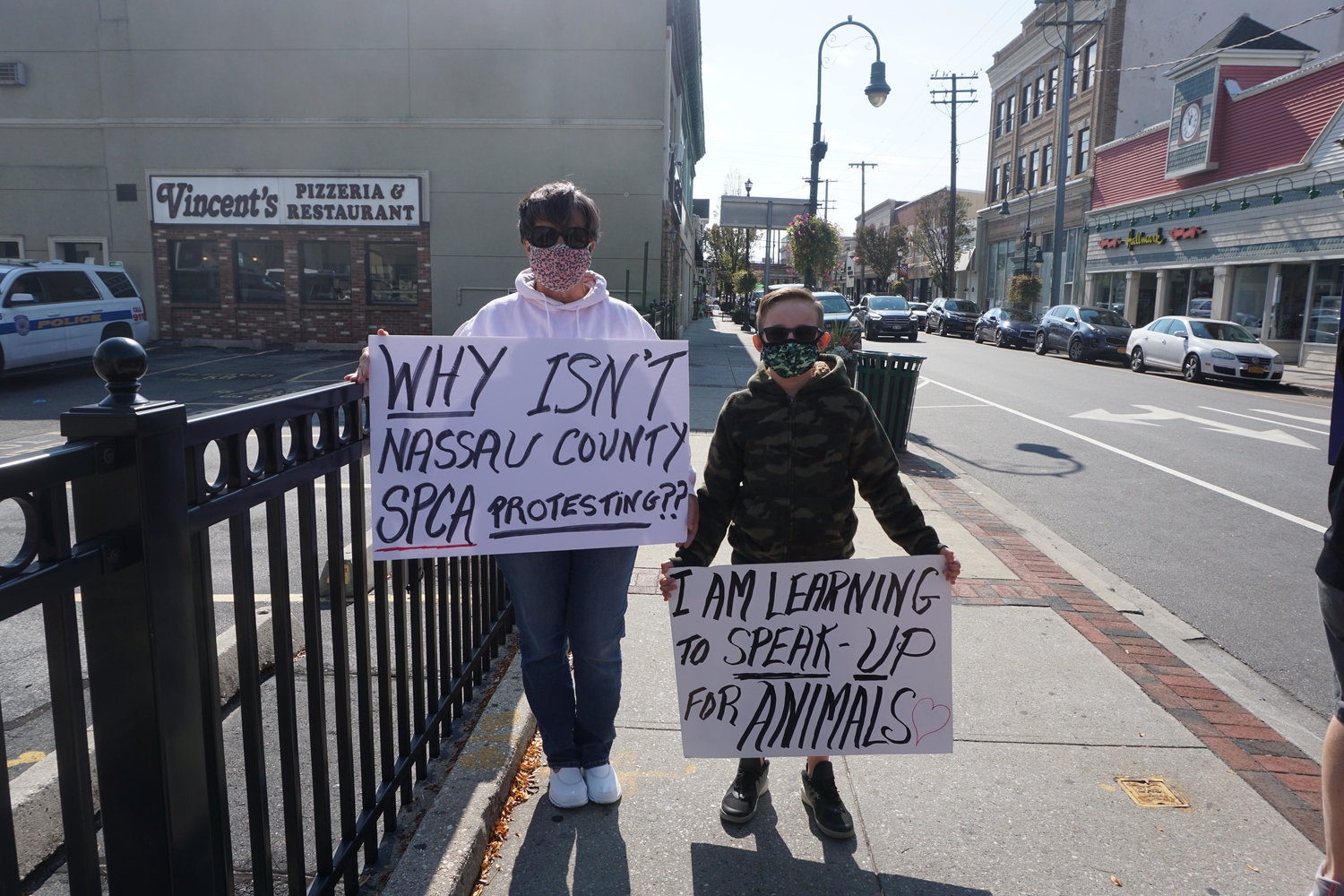 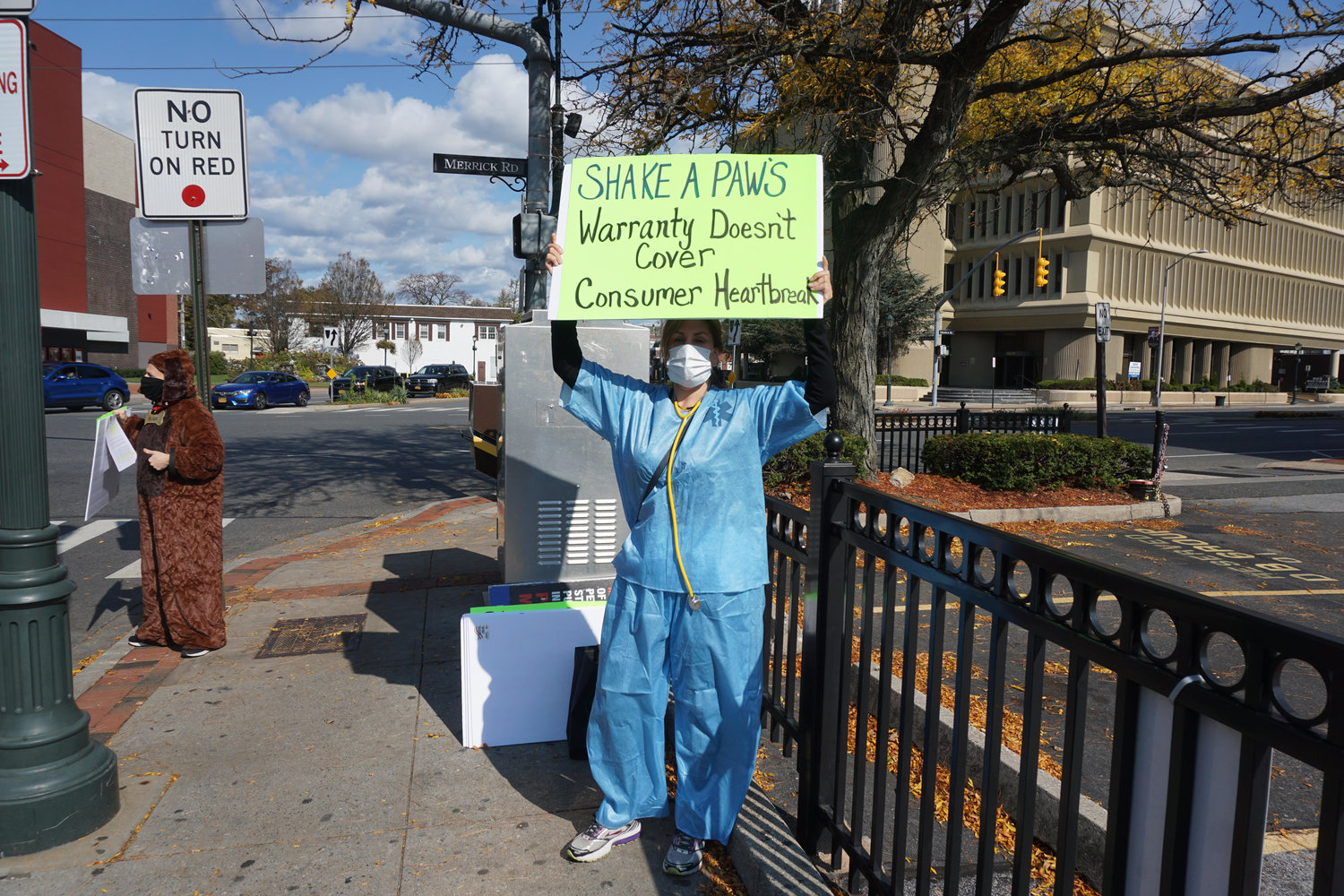 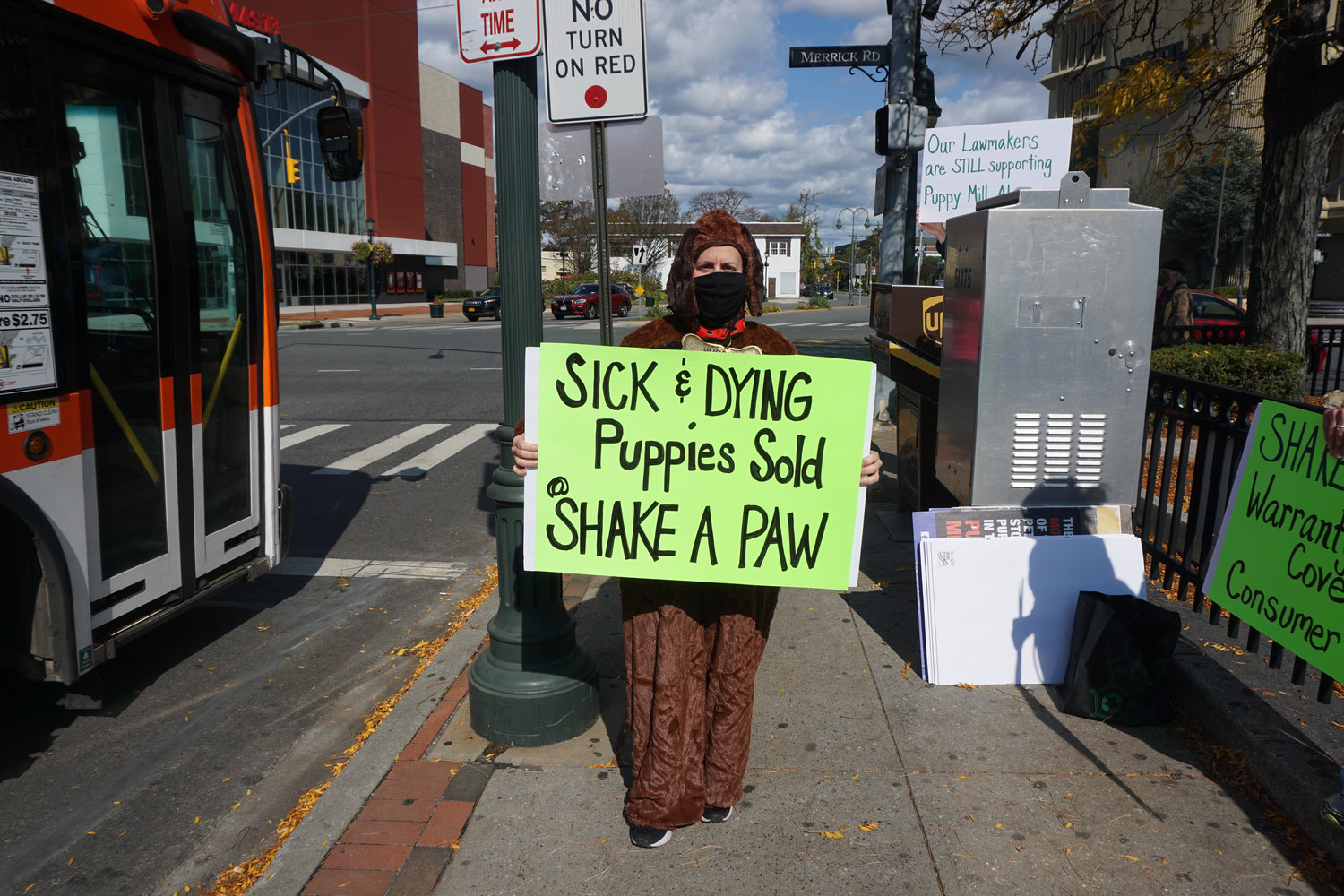 Chants of “Adopt, don’t shop!” and “There’s no excuse for animal abuse!” echoed outside Shake A Paw in Lynbrook on Sunday as dozens of protesters gathered after a number of customers reported buying puppies there that got sick and died.

Wearing masks and socially distanced, the protesters lined up across the street and in front of the pet store at noon, brandishing signs. “I’m angry, and we want change,” said Keri Michel, a volunteer with the group Puppy Mill Free Long Island, who helped organize the protest. “The animals can’t wait any longer . . . Too many animals are suffering and dying.”

During the protest, a person who identified himself as the owner of the store, but did not give his name, declined comment on the allegations in several consumer complaints that the shop was selling sick puppies. A representative of the Hicksville Shake A Paw said the manager and owner were not available for comment.

Earlier this month, Marissa Soto, of Staten Island, told the Herald that she had purchased two puppies from the Lynbrook store, and they had died within days of being brought home. Both puppies died of parvo, a highly contagious virus that causes an infectious gastrointestinal illness in puppies and young dogs.

“The first one was really devastating to my daughter and to us because it was sort of shocking,” Soto said last month. “We’ve had dogs before, we’ve had puppies before, and that’s not something that has ever happened to us. The second one, I was more angry than anything else.”

The gathering was one of many rallies that Michel’s group has organized across Long Island. The organization works to educate the public about puppy mills, which are large-scale dog-breeding farms, where, according to the ASPCA, puppies are often taken from their mothers at eight weeks or younger. The group also works to pass federal, state and local laws to protect puppies and dogs.

In 2017, Puppy Mill Free Long Island representatives provided the New York state attorney general’s office with dozens of consumer complaints about sick pets that customers had purchased at Shake A Paw in Lynbrook and Hicksville. In March 2018, the office announced that it was investigating both stores. That probe is ongoing.

“Shake A Paw employees know damn well what they are doing by buying low and selling high,” Michel said.

Many protesters said they came to send a message to pet-shop owners: Don’t buy from puppy mills. “Employees in these pet stores don’t care that they are breaking families’ hearts and wallets,” said Tina Kingsepp, a Ronkonkama resident who purchased a puppy from a Valley Stream pet store that she said was sick with pododermatitis, or inflammation of the paw skin. “The employees of pet shops across Long Island pretend not to know the risk of buying and transporting animals from puppy mills. This problem is so bad that Long Islanders have been wired to think that it’s normal to buy sick puppies.”

Other protesters said they would like to see legislation to protect puppies. And others said they want to see further regulations to hold animal breeders and veterinarians accountable.

“Legislation needs to be made to help protect dogs and their living conditions, and more money should be allocated toward helping keep dogs healthy,” said Tina’s husband, Matthew Kingsepp, who added that he came to support his wife and the cause. “There’s too many stories of people getting sick dogs, so this needs to stop.”

Diane Madden, an animal-rights advocate from East Meadow, said local officials need to step in. “I’m here to connect the dots between animal welfare and elected officials because they have the power to stop this,” she said, adding that she knows people who purchased sick puppies from both Shake A Paw locations.

An East Rockaway resident who only gave her first name, Danielle, said she purchased a bullmastiff in 2016 from Shake A Paw in Lynbrook, and it became aggressive and died of cancer.

“She would attack anyone that wasn’t an immediate family member,” she said. “When my dog died, it was gut-wrenching, and we put in thousands of dollars toward the situation.”

Emily Hayes, of Lynbrook, who also said she purchased a sick dog from Shake A Paw, said, “We need to have our voices heard, and we need to see some real lasting change, because these puppies are being treated like objects just for the purpose of enlarging the pockets of the sellers.”

Mike Smollins contributed to this story.