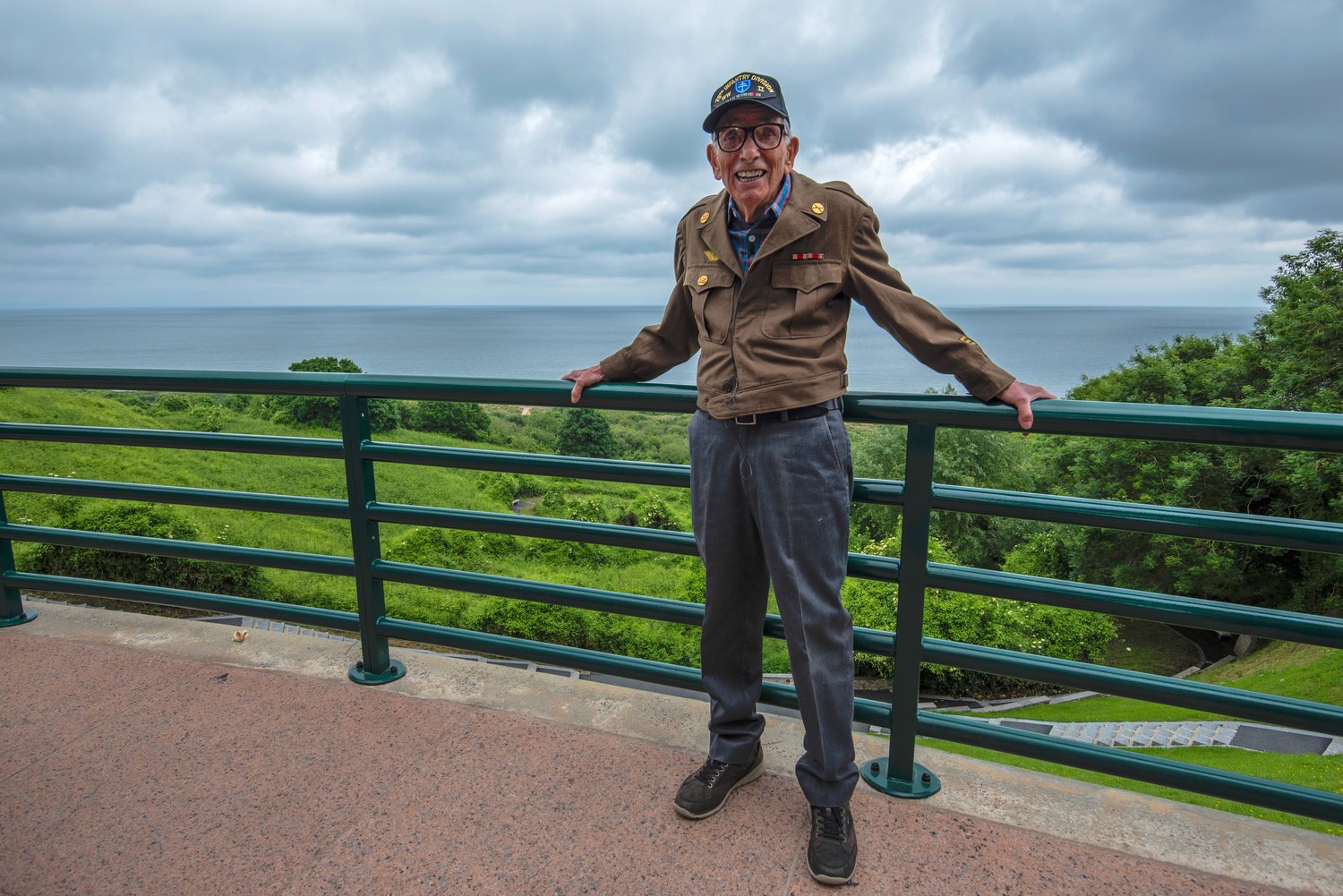 Kellerman returned to Normandy in 2018 to be honored as a Chevalier de la Légion d’honneur, a member of the French Legion of Honor.
Courtesy Jean Powers 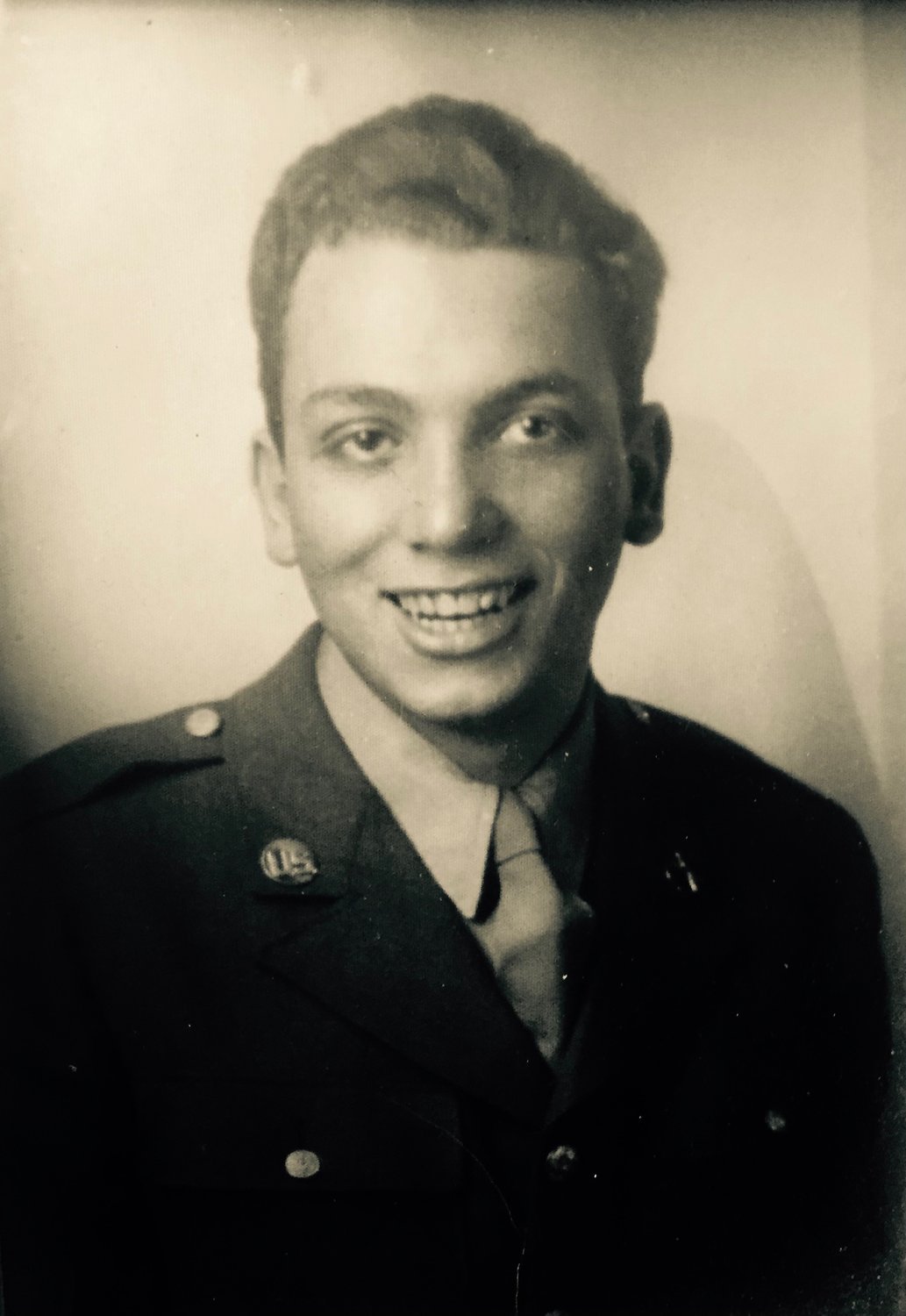 William Kellerman, an East Atlantic Beach resident, when he was a soldier in World War II.
Courtesy Jean Powers
Previous Next
By Brendan Carpenter

Nearly 80 years after his service in the Army in World War II, William Kellerman, of East Atlantic Beach, has finally been honored as a hero at a ceremony at Fort Hamilton in Brooklyn.

Kellerman, now 97, was stunned but happy. It was as if, he said, he was “in a dark room and someone finally turned a light on.” He received a Purple Heart and a Prisoner of War Medal during a ceremony at the fort on Tuesday.

During the war, Kellerman was shot, and held by the Germans as a prisoner of war. His medals took so long to be presented to him because, for years, people found his story hard to believe, or didn’t consider him a POW because he escaped from the Nazis before being sent to a prison camp.

But his daughter, Jean Powers, fought for decades for his wartime recognition, writing letters and making calls to get her father’s story heard. She was dismissed by the Veterans Administration, but got in touch with Florent Plana, a French native who studies World War II history, who recorded Kellerman’s oral history for over three hours.

Powers was eventually told that her father’s war files had burned in a fire at a military post in St. Louis.

He was recognized for his service by the military, and in 2018, he, his daughter and granddaughter traveled to Normandy, France, where he was named a Chevalier de la Légion d’honneur, a knight of the French Legion of Honor.

Kellerman grew up in the Bronx, and in 1943, at age 18, he enlisted in the Army. He was among the troops who landed on Utah Beach in Normandy on June 11, 1944, five days after D-Day. He remembers seeing dead soldiers still lying on the sand.

That July 4, the radio broke in his headquarters, and his captain ordered him to find a colonel and “ask what we should do.” Kellerman set off running, but eventually ran into the path of a German tank, which had its guns pointed right at him. He put his hands up and was taken prisoner.

He was brought to an area where there were other American prisoners, and they were told they could walk around only at night; otherwise they would risk being shot by German artillery.

After a few days, Kellerman made his move. “The soldiers stopped to use the bathroom,” he recounted. “When they weren’t looking, I crawled into some bushes. No one else came with me. I stayed quiet until they walked away.”

He escaped, and eventually found his way to a farmhouse, the home of a man who, naturally, spoke only French. The man realized that Kellerman was an American, and wanted to help, so he burned his uniform and gave him new clothes. Back on his way, Kellerman recalled later, he would pass German soldiers and say “bonjour” to them to appear French.

Now far from Normandy, Kellerman came across a small bridge where a man was fishing. He noticed the man had a bike, so he took it, being tired from walking. “It wasn’t nice,” he said, “but it was war.”

A week into his bike ride, he had a flat tire. He walked the bike to the nearest town and found a bike shop. When he walked in, four armed men came out from the back, pointing their weapons at him. They thought he was German, so he had to prove he was American, and he talked about the World Series back in the States as a way to do so.

Later, when he related his story of his capture by the Germans and his escape to a colonel, the officer’s reaction was, “You’re Jewish, aren’t you?” Kellerman said that he was. “You’re lucky they didn’t kill you.”

Near the end of the war, Kellerman started feeling a sting in his leg and hand, and, improbably, realized that both were bullet wounds. His leg became infected, but he had the wound treated at a field hospital in Germany.

When he came home from the war, he developed a love of painting, so he went to school to study art for a time before heading off to Miami with a friend. They eventually made their way to Key West, and then to Havana, Cuba, in 1949.

Back in the States, Kellerman met his wife, Sandy, on a fortuitous blind date. They were married for 70 years, before Sandy died a year and a half ago, at age 89.

“One guy said sarcastically, ‘That is a great story,’” Kellerman said. “He said that I should write a book.”