Angry leaders in community speak out against state payroll fee 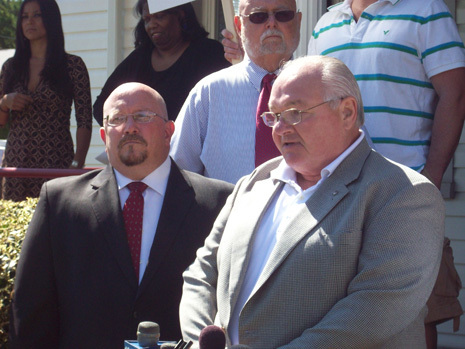 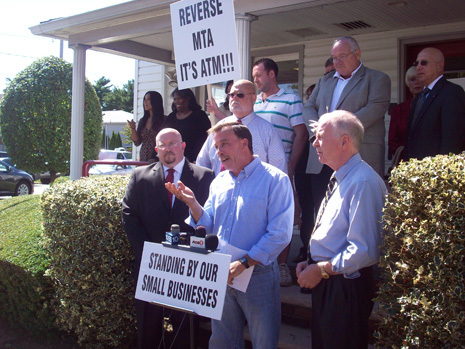 In the midst of election season, almost anything to do with the Metropolitan Transportation Authority has become a hot-button issue.

A group of East Meadow business owners gathered on a breezy Tuesday morning to speak out against the state’s MTA payroll tax. The tax, which went into effect in 2009 to help alleviate the authority’s financial woes, charges businesses in 12 counties, including Nassau, about .34 percent per $100 of payroll.

“Surviving in these economic times is hard,” said Rich Bivone, owner of RMB Drafting in East Meadow and Nassau County chairman of the Long Island Business Council. “To have this tax added to what we have to do now on a daily basis to survive is unbelievable.”

The media event on Tuesday, held outside RMB Drafting on East Meadow Avenue, was sponsored by state Sen. Kemp Hannon (R-Garden City), who is running for re-election in November against Democratic challenger Francesca Carlow. Hannon, who voted against the MTA payroll tax, explained that politics are getting in the way of taking a hard look at fixing a number of management issues.

“It cannot be done overnight,” he said, “but there hasn’t been any sense of direction to this."

Hannon acknowledged the upcoming elections, but noted that this issue goes beyond political gains. “Yes, there is an election for governor, statewide offices, Assembly and Senate,” he said. “What we need to do is have discussion about policy, not just politics.”

Jim Calabrese, owner of the family-owned Calabrese Brothers Construction in East Meadow, said he is used to paying taxes and ever-increasing fees for necessities like fuel and materials. But the added tax prevents his company from growing, he said.

“In a recession, businesses are closed up and down [Hempstead] Turnpike and everywhere else because of this tax,” Calabrese said. “It’s just putting a burden on trying to expand our businesses.”