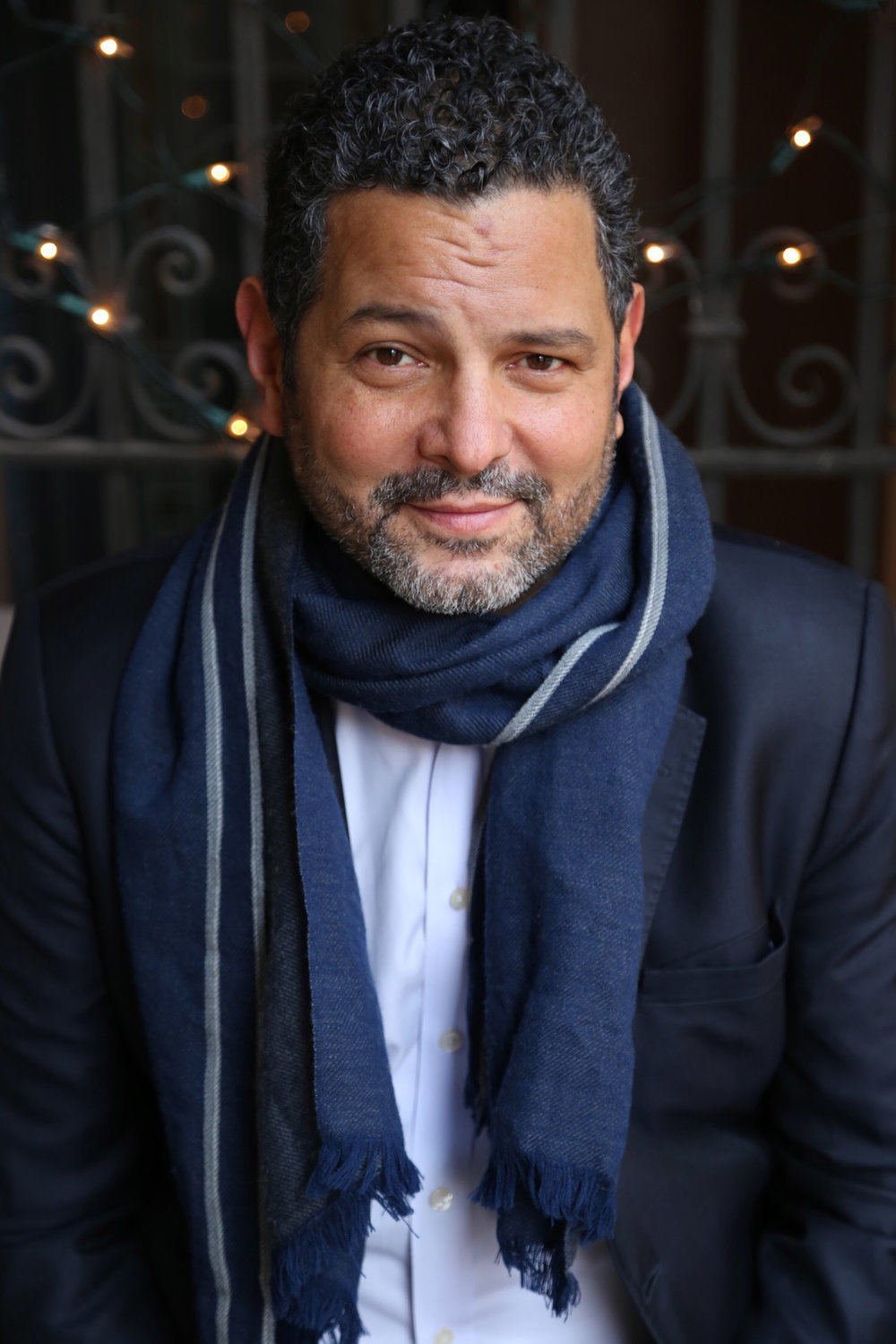 Alex Dinelaris will direct a movie that will film in Lynbrook, East Rockaway, Bay Park and Rockville Centre in June.
Courtesy James Demaria 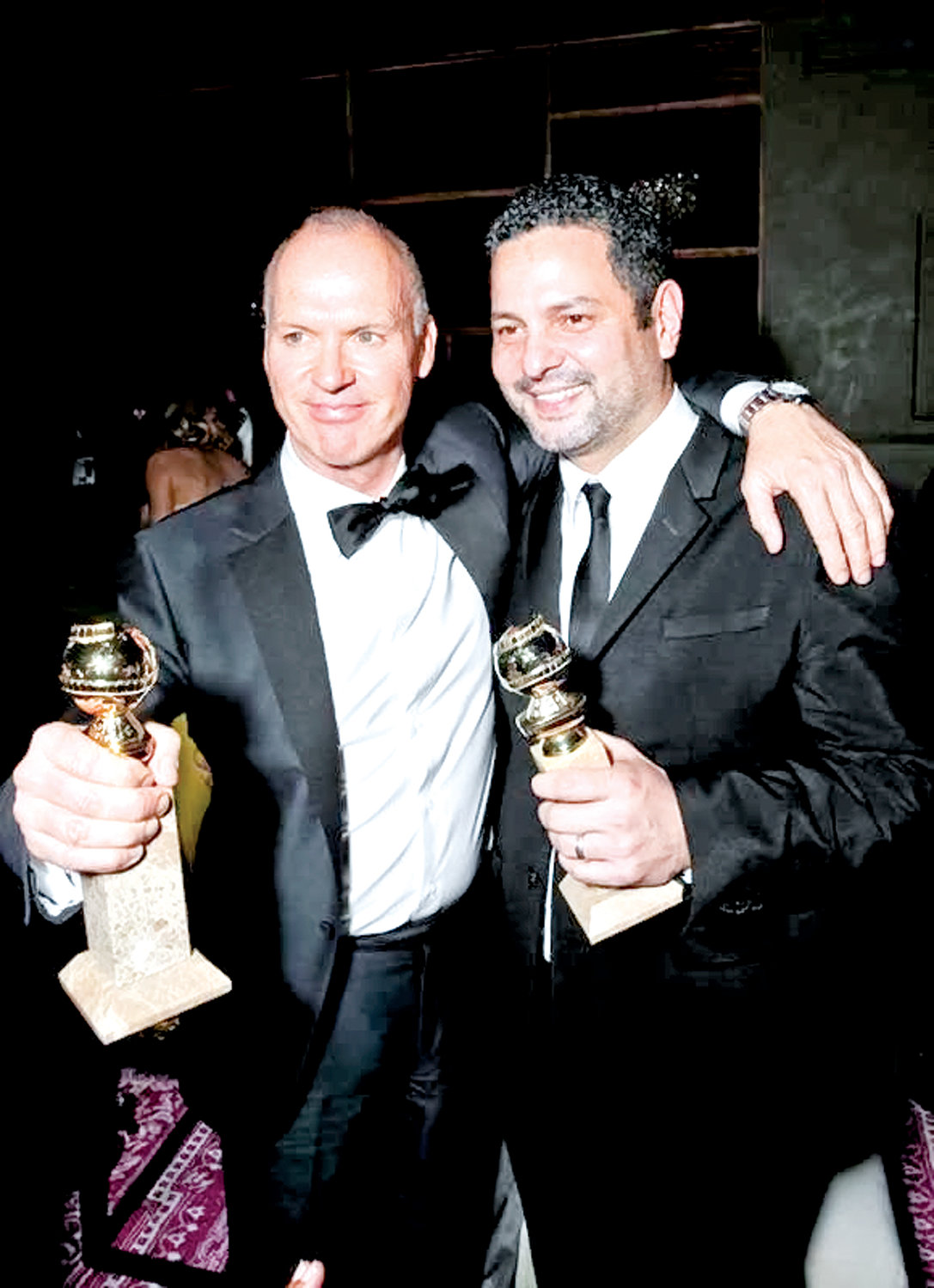 Dinelaris, right, with “Birdman” star Michael Keaton in 2015 after they both won Golden Globes for their work on the film.
Courtesy Alex Dinelaris 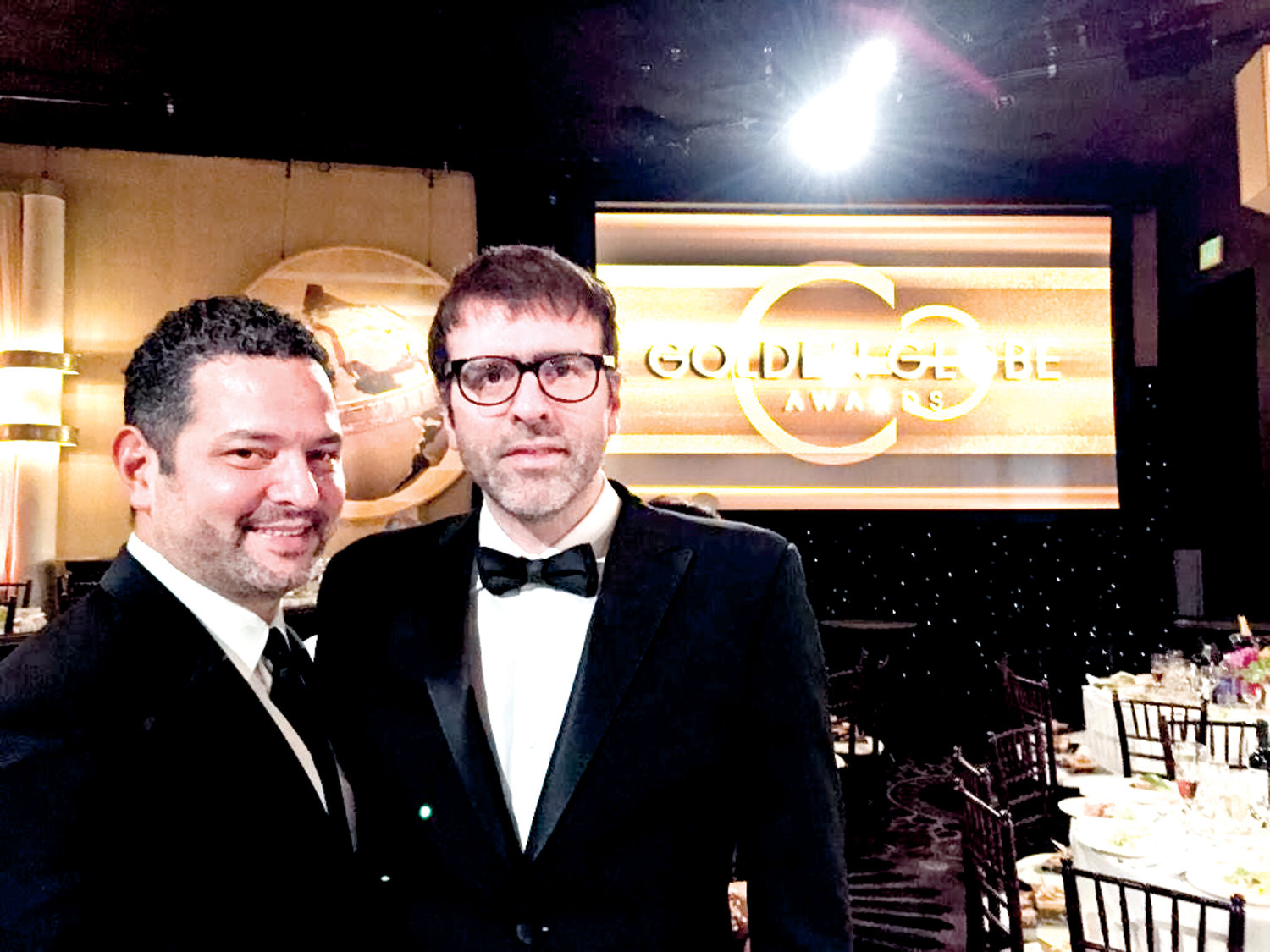 Alex Dinelaris Jr. recalled that when he was a child, he often snuck across Maxwell Street in East Rockaway into the Criterion Theatre, where he watched a movie on repeat for hours. Now, at age 51, the Academy Award-winning screenwriter is returning to his roots for his directorial debut.

His film “In This Our Time” will be shooting in Lynbrook, East Rockaway, Bay Park and Rockville Centre during the first two weeks of June. The half-hour film follows a 16-year-old whose parents are about to separate. Dinelaris wrote and will direct the movie, and his production company, Lexicon Films, will produce it.

“I love that my first film is going to be back home,” Dinelaris said. “Directing my first one in the same neighborhood makes me really nostalgic.”

Dinelaris lived in East Rockaway from ages 6 to 26, and visited his father and stepmother in Rockville Centre every Thursday and Sunday growing up. He attended St. Raymond’s Parochial School, where he was cast as Tevya in the school’s production of “Fiddler on the Roof.” In a TedxBroadway Talk video from 2016, he said that performance sparked an obsession with the theater. He told the Herald that he only ever felt “in my zone” when he was writing a play, and he read every book he could about writing techniques to hone his craft.

For many years, though, it didn’t seem like his hard work would pay off. Dinelaris’s first job was at Santino’s Restaurant and Lounge on Main Street in East Rockaway, and he continued working in the restaurant industry for 24 years while struggling to make it as a writer.

“My life feels like one day I’m going to wake up, and someone will tell me to put bread on Table 7,” he joked.

Eventually, Dinelaris got a job selling T-shirts on Shubert Alley, near Broadway, to remain close to New York City’s theater district. At that time, he recounted, he took early trains to Manhattan to avoid peak prices, and if he got tired, he snuck into the Marriot Marquis to take a nap.

By the early 2000s, Dinelaris was directing small shows, and in 2002, he penned “Folding the Monster,” which chronicled a father and daughter’s relationship. It gained a lot of attention, and actors Danny Aiello and Rosie O’Donnell expressed interest in playing the characters. They did several script readings, but the play was never produced due to scheduling issues.

It was, however, one of his father Alex Sr.’s favorites. One day in 2004, after the elder Alex was diagnosed with pancreatic cancer, he asked his son to let him read the play. Once he was finished, Dinelaris said his father told him he didn’t understand. Dinelaris then offered to explain the plot to him, to which his father replied, “’No, I understood the play. I don’t understand how this pile of paper that used to be white paper, you sat down and you wrote on it, and now I know these people.”

After his father’s death a few months later, Dinelaris couldn’t write. Then, a year later, he returned to his passion and began crafting “Still Life,” about a photographer whose father is diagnosed with cancer.

“This play that was a gift from my father changed my life,” Dinelaris said, because it introduced him to his agent, Olivier Sultan, and to filmmaker Alejandro Gonzalez Inarritu, with whom he created “Birdman or (The Unexpected Virtue of Ignorance),” which chronicles cinema superhero Riggan Thomson (Michael Keaton) as he mounts an ambitious Broadway production that he hopes will breathe new life into his stagnant career. In 2015, the film won the Academy Award for Best Original Screenplay. He also won a Golden Globe for Best Screenplay.

“It was entirely surreal,” Dinelaris said, adding that several of his friends from Long Island had an Academy Awards watch party that night and sent him their reactions. “The joy with which they exploded made me emotional,” he said.

Dinelaris also said his father “would have hated ‘Birdman’” and “would have been pulling for ‘Boyhood,’” a coming-of-age film released that year that displayed the joys and pitfalls of growing up through the points-of-view of a boy, his parents and his sister.

Since then, Dinelaris has continued to realize success as the writer of the Broadway musical “On Your Feet” and as the co-producer of the film “The Revenant.” He is now working with composers Frank Wildhorn and Leslie Bricusse to make a movie version of their Broadway musical, “Jekyll and Hyde,” which is based off the novella “The Strange Case of Dr. Jekyll and Mr. Hyde.”

Dinelaris’s script is darker and more modern than the musical, which Wildhorn said he appreciated. “I’ve known these characters for more than half my life,” he said. “But when I read his script, it felt like I was meeting them for the first time.”

The script has now been finished, and Dinelaris and co-producer Rob Quadrino are negotiating with studios to produce it. He said he hoped to begin filming in 2020.

He called it “surprisingly inevitable” that he is directing his first film in the neighborhoods where he grew up.

“Every moment in our lives is leading us to something surprising and inevitable,” Dinelaris said in the Ted Talk video. “You just have to pay attention to the clues.”